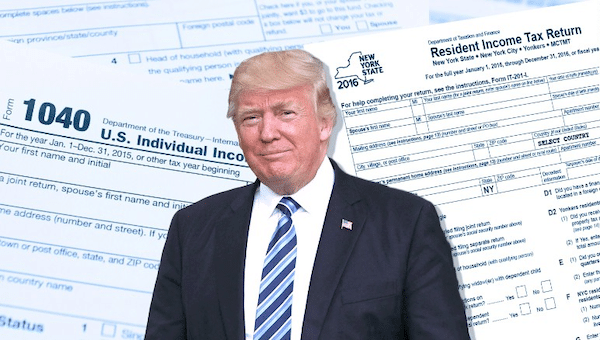 END_OF_DOCUMENT_TOKEN_TO_BE_REPLACED

Donald Trump’s Tax Returns Have Been Released, by Bill Bonner

Is Donald Trump’s net worth anything close to what he implies it is? From Bill Bonner at rogueeconomics.com:

SAN MARTIN, ARGENTINA – The big news at the weekend was that the president has not paid much in federal income taxes for years. In 2016 and 2017, for example, the billionaire paid only $750.

Mr. Trump has portrayed himself to the public as a very rich and successful man. Yet, to the Internal Revenue Service (IRS), he has painted a different portrait… more like a Francis Bacon than Hans Holbein the Younger.

That is, he cast himself as a loser… someone whose losses overpower his gains, and who thus, generally, owes no federal taxes.

But let’s come back to that…

It’s spring here in the Southern Hemisphere. The grass is green. The sky is blue. And it’s time to plant the garden.

It was to that end that Gustavo put his shoulder to the plow on Saturday… and began an adventure.

Plowing with a mule

We have tractors. But the garden is enclosed within adobe walls. Only a mule could get in to do the work.

“Mules are better than horses,” Gustavo explained. “They’re strong. Reliable. But they’re temperamental. You have to work with them.

“You can get a horse that has been trained by a professional. But you have to train a mule yourself. You have to get to know it. Take your time. Mules don’t like to be rushed.

“If you buy a mule… the seller will tell you it’s been trained and it’s very tame. But nobody sells a good mule. They’re not like cars. You can’t upgrade to a better mule. And you can’t downsize to a smaller mule. If someone sells you a trained mule, you know there must be something wrong with it. And you don’t find out what it is until you try to work with it.

“One time, my grandfather bought a mule that had been trained up in the mountains… a long way away… maybe 20 hours on horseback. Well, he got the mule home and the next day, it ran away… It went all the way back to where it came from. Took a couple days.

“He got it back. But it was never a good mule. Some things you just have to do yourself.”

(The mule in question had come from a tiny, remote settlement – a speck of green oasis in a desolate landscape – on the other side of the most rugged mountains in the country.

In the last century, it was a watering stop for drovers taking their animals to the city. Now, it may be abandoned… or turned into a hippie colony. No one knows for sure. Or even how to get there…

We are planning an expedition… to be continued.)

END_OF_DOCUMENT_TOKEN_TO_BE_REPLACED

The IRS has engaged in all sorts of political abuse. From Ron Paul at ronpaulinstitute.org:

What should be of great concern is the possibility that the person who leaked the returns — who the paper says has legal access to President Trump’s tax records — is an IRS employee seeking to undermine the president. This would hardly be the first time an IRS employee has leaked confidential information because he disagreed with the taxpayer’s politics. In 2014 the agency had to pay the National Organization for Marriage 50,000 dollars after an IRS employee gave names of the group’s donors to the group’s opponents.

In 2014-2017, my Campaign for Liberty group was repeatedly threatened by the IRS because it refused to give the agency the names of and other information about its top supporters. Fortunately, the IRS rescinded the regulation forcing groups like Campaign for Liberty to violate supporters’ privacy or face legal penalties. However, campaign finance reform legislation that recently passed in the House of Representatives would require the IRS to resume collecting this information, and the New York attorney general is suing the IRS to force the agency to reinstate the regulation.

The right of groups like Campaign for Liberty to protect their supporters’ privacy was upheld by the Supreme Court in NAACP v. Alabama. As Justice John Marshall Harlan wrote, “Inviolability of privacy in group association may in many circumstances be indispensable to preservation of freedom of association, particularly where a group espouses dissident beliefs.”