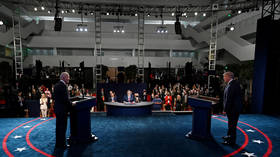 There were a couple of important things that emerged from last night’s shit show. From Andrea Widburg at americanthinker.com:

The short version of the debate is that Biden did well if one ignored that almost every other statement he made was a lie or fantasy; Trump dominated him, almost too aggressively; and Chris Wallace may have been the worst and most obviously biased moderator since Candy Crowley.  Most significantly, though, Biden and Trump each made a critical point.  Biden’s was a tacit admission that if he is elected president, he will preside over the end of the filibuster, allowing Democrats to pack the courts and add two new Democrat-majority states.  Trump’s point was that he’s holding damning evidence about the Democrats’ coup attempt.

Let’s begin with Biden, whose squirming on court-packing and the filibuster promises the end of the American experiment.  Chris Wallace, in one of the few tough questions he posed to Biden, said this:

So my question to you is, you have refused in the past to talk about it, are you willing to tell the American tonight whether or not you will support either ending the filibuster or packing the court?

Biden refused to answer, something the Trump quickly challenged.  Here’s the colloquy:

BIDEN: Whatever position I take on that, that’ll become the issue. The issue is the American people should speak. You should go out and vote. You’re voting now. Vote and let your Senators know strongly how you feel.

TRUMP: Are you going to pack the court?

TRUMP: Are you going to pack the court?

BIDEN: Make sure you, in fact, let people know, your Senators.

TRUMP: He doesn’t want to answer the question.

BIDEN: I’m not going to answer the question.

TRUMP: Why wouldn’t you answer that question? You want to put a lot of new Supreme Court Justices. Radical left.

BIDEN: Will you shut up, man?

BIDEN: This is so un-Presidential.

TRUMP: He’s going to pack the court. He is not going to give a list.

Russia Could Never Discredit The US Empire The Way These Guys Just Did, by Caitlin Johnstone

The best characterization we’ve seen of last night’s debate was that it was a shit show. That sums it up rather well. From Caitlin Johnstone at caitlinjohnstone.com:

If Vladimir Putin were every bit the election-meddling demon the Democrats say he is, and if he had unlimited time and unlimited resources to create the perfect ninety-minute propaganda video to discredit the US-led unipolar world order, he could not have designed one more effective than the performance that was just delivered by President Donald Trump and Democratic nominee Joe Biden with the help of moderator Chris Wallace.

Trump after being asked to condemn white supremacists: ‘Proud boys, stand back and stand by’ pic.twitter.com/4Pw2z3FsUO

I mean, it had everything. Both candidates yelling over each other the entire time, Biden telling the sitting president of the United States to shut up on live television, Trump at one point saying the Proud Boys should “stand back and stand by“, Chris Wallace literally shouting to be heard over the unceasing interruptions, Biden getting confused and arguing that the Green New Deal would pay for itself and then turning around saying he does not support the Green New Deal, mountains of lies and nonsense, both candidates trying to out-right wing each other, and absolutely no meaningful discussion of policies that will actually help ordinary Americans at all.

From Ray McGovern at consoriumnews.com:

Exclusive: CNN was happy to add a right-wing questioner for the Republican debate but won’t add a progressive for the Democratic debate, another sign of how the “mainstream media” shapes what’s acceptable in political discussion, a lesson that ex-CIA analyst Ray McGovern has learned from personal experience.
By Ray McGovern

CNN, the sponsor of Tuesday’s debate among Democratic presidential candidates, has gone to extraordinary lengths to avoid being sullied with the stigma of “liberal bias.” The four CNN journalists handpicked to do the questioning have carefully protected themselves from such a charge.

As Jeff Cohen noted Friday in “CNN’s Double Standards on Debates,” CNN made a point of including a bona fide right-winger in the Republican debate but “is not planning to include a single progressive advocate among its panel of four questioners … CNN presents as neutral: CNN’s [Dana] Bash and three CNN anchors (Anderson Cooper, Don Lemon, and Juan Carlos Lopez of CNN en Espanol.)”

The significance is that while a person from the Right or Left might break out of the usual frame of these debates, “mainstream” panelists can be counted on to ask predictable queries with maybe a “gotcha” question or two tossed in to show how “tough” the reporter can be. CNN’s line-up fits that description to a tee.

Dana Bash, who was also a panelist at last month’s debate among Republican candidates, has been a godsend to me as I hunted for examples to illustrate what has become of the so-called “mainstream media.” Speaking to college and other audiences, I often show this short but revealing video clip of Bash plying her “neutral” trade.

Perhaps you will agree that, although less than a minute long, this clip is worth far more than a thousand words in making clear how CNN crackerjack reporters like Dana Bash and CNN senior statesman Wolf Blitzer apply their peculiar brand of “fair and balanced.”

What leaps out is how they, and their acutely attentive technical support, were prepared at a second’s notice to nip in the bud any favorable (or merely “neutral”) allusion to Iran, on the one hand, and any possibly negative reference to Israel, on the other.

In Iowa, reporting on the Republican caucus 3 1/2 years ago, Bash singled out Army Cpl. Jesse Thorsen for an interview. The young soldier sported on his neck a large tattoo of the Twin Towers with the words “9/11 Remember” – making Thorsen seem an ideal candidate for the kind of “neutral” – super-patriotic – interview that Bash had in mind.

Although he supported libertarian Ron Paul, this young corporal on his way to his third deployment to Afghanistan looked like an easy mark for a fast-talking reporter whose “neutrality” was infused with Official Washington’s disdain for Paul’s anti-interventionist stance on foreign policy.

Pointing to the tattoo, Bash closed in for the kill, suggesting Ron Paul would endanger U.S. security if he pulled troops out of conflict areas like Afghanistan. Alas, Thorsen had not been briefed on the intended script, and the encounter did not work out the way Bash expected. The young soldier went off message into dangerous territory, mentioning – or, rather, trying to mention – Iran and Israel in ways that didn’t mesh with what all the Important People know to be true: Iran always bad, Israel always good.

Just in the nick of time, there was fortunate glitch cutting off the discordant message. Or as Blitzer explained, “we just lost our technical connection, unfortunately.”

Posted in Media, Other Views