Interest rates are going up, which is generally not a good thing for heavily indebted economies. That would be most of them. From Wolf Richter at wolfstreet.com:

END_OF_DOCUMENT_TOKEN_TO_BE_REPLACED

A very crowded trade goes begging for a contrarian reaction.

The 10-year Treasury yield closed on Monday at 2.86% the highest since January 16, 2014, after briefly kissing 2.89% during the day. At the moment, it is holding at 2.85%. Bond prices fall when yields rise – and being short the 10-year Treasury, and thus betting on a rising yield, has become a very crowded and profitable trade for hedge funds and other speculators.

Short bets in 10-year Treasury futures rose to 939,351 contracts, the most ever, according to Commodity Futures Trading Commission data through February 6, cited by Bloomberg yesterday.

This record came even after the market turmoil on February 5, when the Dow plunged 4.6% and when, briefly, Treasuries soared, with the 10-year yield dropping 13 basis points, which would have made shorts very nervous. But apparently, they hung on, as their record short positions through February 6 shows, when the 10-year yield rose again and closed at 2.79%.

That 3% is a key level for another reason. At around 3%, the 10-year becomes very alluring for long-term holders, given today’s dividend yields and other yields, and it will bring out more buyers. 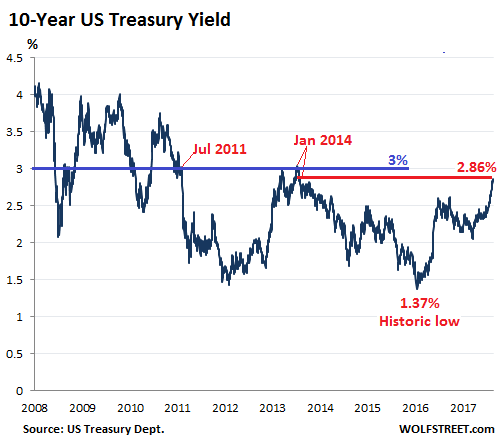 The emergence of these additional buyers may coincide with short-sellers trying to take profits, which may conspire to pump up the price and push down the yield. And this, fired up by speculators trying to get out of a short position, would turn into a sharp snap-back rally for the 10-year Treasury, and a sharp drop in yields. This could take off even before the 10-year yield hits 3%, and it could catch some speculators by surprise.

China Officially Sold A Quarter Trillion Treasurys In The Past Year (Unofficially Much More) And What This Means, by Tyler Durden

Back in May, this website was the first to explain the “mystery” behind Belgium’s ravenous Treasury buying which in early 2015 had turned into sudden selling, and which we demonstrated was merely China transacting using offshore Euroclear-based accounts to preserve anonymity. Since then theme of Belgium as a Chinese proxy has become so popular, even CNBC gets it.

Consequently, we were also the first to correctly warn that China had begun liquidating its Treasury holdings (a finding which left none other than Goldman “speechless”), which also helped us predict that China is about to announce its currency devaluation three days before it happened as the conversion of Chinese reserves from inert paper to active dollars hinted at a massive effort to stabilize the currency, and thus unprecedented capital outflows.

As a result, the only data point which mattered in yesterday’s Treasury International Capital data release was not China’s holdings, which actually “rose” $1.7 billion in the month when China actively devalued its currency and then spent hundreds of billions to prevent the devaluation from becoming an all out FX rout, but the ongoing decline in Belgium holdings. As the chart below shows, Belgium, pardon Euroclear – which is a clearing house not only for China but many other EM nations who park their reserves in Belgium – sold another $45 billion in Treasurys last month, bringing the total to a dangerously low $111 billion, down from $355 billion at the start of the year.

Lumping Belgium and China holdings into one, as we have done since May, shows that as expected, Chinese selling continued in August, and the result was another drop of $43 billion in TSY holdings in the month of August, which incidentally mirrors perfectly the previously announced decline in September Chinese FX reserves, which according to official data declined from $3.557 trillion to $3.514 trillion.

According to the chart above, while to many Quantitative Tightening is a novel concept, the reality is that China (+ Euroclear) have been dumping Treasurys and liquidating reserves since January when total holdings peaked at $1.6 trillion last summer, and have since declined to $1.38 trillion. It means that China has sold a quarter trillion dollars worth of Treasurys in the past year, in the process offsetting what would have been about 25% of the Fed’s QE3.

To continue reading: China Sold A Quarter Trillion Treasuries In The Past Year