Is the United States on The Same Calamitous Path as Yugoslavia? by Brandon Smith

Imagine living in a country where prices doubled daily. From Brandon Smith at alt-market.com: 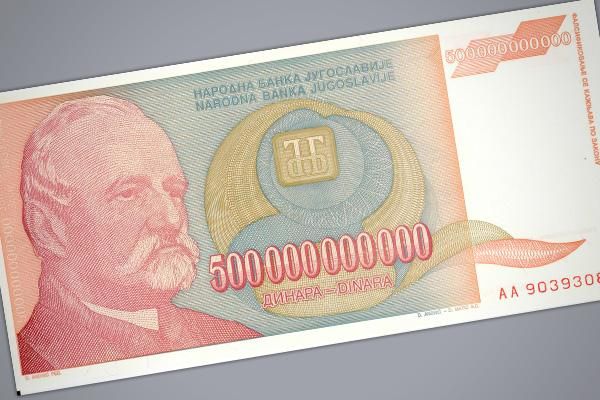 Of all the inflationary disasters in modern economic history, Yugoslavia’s is the one most ignored by the mainstream. To be sure, the collapse of the Eastern European nation was a slow burn, but with a big explosion at the end. Most people are familiar with the Serbian/Croatian war and the genocide that followed, but few people are familiar with the economic crisis that led to the conflict.

I am not here to present an in-depth analysis of the eventual breakup of Yugoslavia, only to examine the conditions that triggered it. I believe there are some interesting similarities to burgeoning conditions within the U.S., along with some distinct differences.

President Josip Broz Tito led the nation in various capacities from 1953 to 1980. He used two powerful tools to clamp down on unrest in the ethnically-diverse nation: large-scale repression of dissenting voices using both police and military forces, and allowing regional foreign borrowing. The latter might not sound particularly important. According to the CIA’s 1983 national intelligence document Yugoslavia: An Approaching Crisis?:

Although self-management in theory permits workers to own and manage their enterprises, in fact the leaders in the six republics and two provinces… became the dominant economic decision makers. They grew increasingly protectionist and isolated from each other in pursuing local interests. Ignoring national economies of scale and ultimate profitability, they built redundant enterprises, blocked competition on the “unified market,” and granted unrealistic price increases and subsidies to favored industries. Thus, by the early 1980s inflation in the 30- to 40-percent range became chronic…

Yugoslavia’s inflation troubles were ever present, with up to 76% in price increases annually from the early 1970’s to the early 1990’s. In fact, the Cato Institute’s Steve Hanke calls it The World’s Greatest Unreported Hyperinflation.

Killing for Credibility: A Look Back at the 1999 NATO Air War on Serbia, by Brett Wilkins

The US and NATO air bombing campaign against Yugoslavia had everything we’ve come to expect from such interventions: lies, civilian casualties, terrorist allies, a muddled strategy, and a US population that didn’t care. From Brett Wilkins at antiwar.com:

This month marks the 20th anniversary of Operation Allied Force, NATO’s 78-day air war against Yugoslavia. It was a war waged as much against Serbian civilians – hundreds of whom perished – as it was against Slobodan Milošević’s forces, and it was a campaign of breathtaking hypocrisy and selective outrage. More than anything, it was a war that by President Bill Clinton’s own admission was fought for the sake of NATO’s credibility.

Our story begins not in the war-torn Balkans of the 1990s but rather in the howling wilderness of Afghanistan at the end of the 1980s as defeated Soviet invaders withdrew from a decade of guerrilla warfare into the twilight of a once-mighty empire. The United States, which had provided arms, funding and training for the mujahideen fighters who had so bravely resisted the Soviet occupation, stopped supporting the jihadis as soon as the last Red Army units rolled across the Hairatan Bridge and back into the USSR. Afghanistan descended deeper into civil war.

The popular narrative posits that Osama bin Laden and his al-Qaeda network, Washington’s former mujahideen allies, turned on the West after the US stationed hundreds of thousands of infidel troops in Saudi Arabia – home to two out of three of Sunni Islam’s holiest sites – during Operation Desert Shield in 1990. Since then, the story goes, the relationship between the jihadists and their former benefactors has been one of enmity, characterized by sporadic terror attacks and fierce US retribution. The real story, however, is something altogether different.

END_OF_DOCUMENT_TOKEN_TO_BE_REPLACED

US aggression follows a pattern. From Nicolas J.S. Davies at antiwar.com:

Since NATO’s 1999 war on Serbia, U.S. officials have followed a script demonizing targeted foreign leaders, calling ultimatums “diplomacy,” lying about “war as a last resort” and selling aggression as humanitarianism

Across the political spectrum, US leaders insist that they will only go to war “as a last resort.” They want us to believe that they will try every peaceful means to resolve differences with other countries before resorting to war. But if those “peaceful means” mean only ultimatums that are unacceptable to the target country, then US leaders are simply going through a diplomatic charade before going to war.

In such a case, “war as a last resort” refers only to the means of achieving a goal, not to the rights or wrongs of the goal itself. If the underlying purpose is to impose the will of the US government on another country or society, then “war as a last resort” amounts to an illegal threat of war to compel a country to submit to US demands, not a commitment to peace or to the rule of law.

As I wrote last February, former Secretary of State Hillary Clinton uses the term “diplomacy” to mean precisely this kind of brinksmanship, which creates a pretext for war if the other side won’t back down and is quite different from diplomacy to resolve international disputes peacefully, as required by the United Nations Charter and customary international law.

When Clinton told a televised “national security” forum that she “view(s) force as a last resort, not a first choice,” she was echoing what she and Sen. Bernie Sanders both said in Democratic Party debates. But in Clinton’s case, using the phrase “last resort” in this way is a clever way to reassure her listeners without actually modifying her hawkish and coercive approach to international relations. By contrast, Sanders was on firmer ground since he voted against two wars on Iraq (in 1990 and 2002), but did vote for war on Yugoslavia in 1999, a vote he still defends.

In negotiations at Rambouillet, France, in 1999, Secretary of State Madeleine Albright gave Yugoslavia only a devil’s choice between agreeing to a NATO military occupation (of all its remaining territory, not just Kosovo) and a NATO assault. When President Slobodan Milosevic refused these impossible terms, the West blamed him for triggering a U.S.-led war that was neither a war of self-defense nor a U.N.-backed collective security operation. In other words, it was a war of aggression by the US and NATO against a largely defenseless nation.

But Milosevic had been so thoroughly demonized that few Americans seriously considered Yugoslavia’s position. Today, even fewer Americans know that the man our leaders tagged as a “new Hitler” and the “Butcher of the Balkans” was eventually exonerated by the International Criminal Tribunal for the former Yugoslavia (ICTY), ten years after he died of a heart attack in a prison cell at The Hague.

Few also remember that the 1,380-member-strong Kosovo Verification Mission (KVM) of the Organization for Security and Cooperation in Europe (OSCE) was withdrawn six days before NATO began its aerial bombardment.

Pascal Neuffer, a Swiss member of the KVM, said, “The situation on the ground on the eve of the bombing did not justify a military intervention. We could certainly have continued our work. And the explanations given in the press, saying the mission was compromised by Serb threats, did not correspond to what I saw. Let’s say rather that we were evacuated because NATO had decided to bomb.”