Not Your Grandfather’s Recession, by David Stockman

Never before has the US government caused a recession, or depression, simply by shutting down the economy. From David Stockman at davidstockmanscontracorner.com via lewrockwell.com:

For point of reference, it took fully 28 weeks to generate the same level of cumulative new claims after the beginning of the Great Recession. During that interval, the largest weekly number was 387,000 during the week of March 29, 2008.

Even when you scroll forward (not shown) to the worst week after the Lehman Bankruptcy meltdown commenced on September 15, the peak number was only 665,000 during the week of March 28, 2009. So today’s new claims number was 10X higher!

So, yes, some politically incorrect pundit is likely to note that there are now:

Moreover, it virtually certain that cumulative initial claims will hit 20 million before the end of April, thereby doubling the above ratios. That is to say, do they really want 100 jobless workers for every case of a bad winter flu?

Well, yes, it seems that our establishment betters can’t get rabid enough urging on a total shutdown of the US economy. 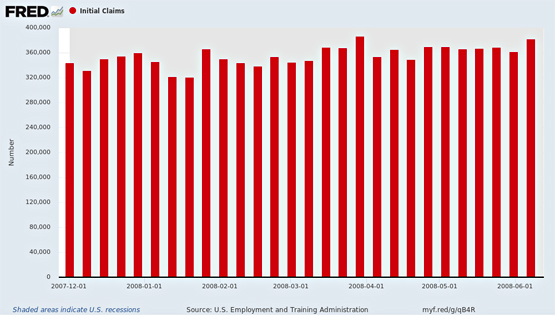 Indeed, the thinly disguised subtext in the whole daily MSM narrative for the last couple of days has been that the benighted governors of the Red States are not doing their part to order their economies into instant cardiac arrest. But it took the perennially obnoxious liberal columnist for the New York Times, David Leonhardt, to come right out and say it.

Much of red America is finally going on lockdown.

After resisting the pleas of public health experts for days, the governors of Florida, Georgia, and Mississippi – all states won by President Trump in 2016 – announced yesterday that they will be ordering their residents to stay home, effective Friday.

The turnabout from Florida’s governor, Ron DeSantis, was especially stark….These new lockdowns are welcome, because they will help slow the virus. But they are also coming much later than they should have, A big reason that the virus has been recently spreading more rapidly in the United States than in Europe or Asia is the slow response from American political leaders.

Trump spent almost two months falsely claiming the virus was going away…Many Republican governors have chosen to echo him, DeSantis, for instance, acted as if he could stop the virus by merely keeping New Yorkers out of his state.

There you have it – a shrill dump of left-wing agitprop and lies that are coming front and center to the debate real soon. Namely, the charge that Trump and his GOP minions caused the coronavirus crisis – so now the regulatory machinery and fiscal resources of the state must be mobilized without limit to wrestle the monster to the ground.

That’s right. The infection rate in New York is 13.4X higher than Florida’s, while New York’s hospitalization and death rates are 21X and 22X higher, respectively.

Yet this sanctimonious Big Apple brat has the gall to accuse the governor of Florida of being a Republican moron or even criminal.

The fact is, DeSantis was right not to go full retard shutdown. For crying out loud, the coronavirus death rate in Florida to date is just one-third of a person per 100,000 population. At some point the idea of quarantining the aged, infirm and vulnerable rather than shit-canning the entire economy might make more sense.

But as of the moment, the liberal commentariat and it Washington collaborators are on their high horse and won’t rest until they have intimidated the entire country into a heretofore unimaginable Economic Cardiac Arrest. In fact, you might as well call it the Anderson Cooper/Chris Cuomo Memorial Depression and be done with it.

After all, it’s the same old shtick. Namely, that the liberals’ unhinged case for plenary economic shutdown is allegedly driven by “science” and that anyone who dares question the fashionable prescriptions is some kind of antediluvian rube.

Of course, in many ways the Donald is exactly that – such as with respect to the entire economic, financial and monetary policy file. There his views are downright neanderthalish.

But that’s what makes this whole Covid-19 imbroglio so forebodingly dangerous. The MSM and Washington political class are turning it into the next phase of the RussiaGate/UkraineGate/Impeachment inquisition against the Donald; and the litmus test of choice is, effectively, shut-it-down-and-lock-them-up at home from coast-to-coast; and keep them there until the Donald’s Greatest Economy Ever is pounded to smithereens.

Ordinarily, the main street economy would have a fighting chance against that kind of ad hoc statist assault on production, which is now accelerating to a full gallop. That’s because the business community – large, small and in-between – would be descending on Washington in waves that would put even the Zulu army to shame.

But not this time. The fact is, we have an Ersatz Socialist and economic primitive in the Oval Office who has managed to club to death like a baby seal whatever was left of GOP fiscal, monetary and free market orthodoxy.

So the $2.2 trillion Everything Bailout (soon to be $4 trillion) was effectively a giant advance from Uncle Sam to hold one-and-all harmless for any lost ground occasioned by the shutdowns which are now sweeping across America like a prairie fire.

In general terms, UI and helicopter money will be keeping paychecks close to 100% of take home, while trillions of easy-peasy loans/grants to business will also cover paychecks (double dip?) for employees – working and not working – as well as most other cash outflows for utilities, overheads, insurance, loan service and the CEOs’ paychecks.

Yet when nearly everyone is held harmless, three very bad things are sure to happen. To wit:

But in the interim, the eruption of statist intervention and fiscal profligacy will reach literally hysterical excesses. That’s because the economic contraction now upon us is nothing like your grandfather’s recessions, which were triggered by the Fed and the collapse of credit and stock market cycles.

By contrast, this one was being prepped by the Fed for years as it fostered egregious excesses of debt, speculation and hand-to-mouth fragility throughout the system. But it is actually being triggered by sudden shutdown edicts from governors, mayors and public health authorities – amplified by both prudent and hysterical precautionary actions being undertaken by the broad public.

It is therefore proceeding with warp speed, as today’s claims data dramatically illustrates. When placed in historical context, the reported 6.6 million of initial unemployment claims (thin red line on the right margin) filed thru last Saturday truly give the notion of being “off the charts” a wholly new definition.

And here is where 30-years of incessant monetary and fiscal intervention and “stimulus” will take its toll. That’s because America’s chattering classes, politicians and business leaders alike have been house-trained on the misbegotten assumption that capitalism has a death wish; and that once it goes into a contraction there is nothing stopping it from disappearing into an economic black-hole, save for the heroic interventions of the state and its central banking branch.

What is coming down the pike in terms of the “incoming data”, therefore, will generate sheer panic in the Imperial City and on Wall Street, too. Thus, as recently as February 19 when the stock market was 35% higher, the talking heads put the odds of recession at essentially zero. After two more weeks of the massive claims reported today, however, the BLS unemployment survey taken in mid-April is likely to find upwards of 15 million newly unemployed and a U-3 unemployment rate of 12-15%.

That will rattle their teeth to the bone on both ends of the Acela Corridor. After all, last time they went into an end-of-the world panic mode during the Great Recession, it took the U-3 rate 31 months from the cyclical low of 4.4% in March 2007 to reach the 10.0% peak in October 2009. 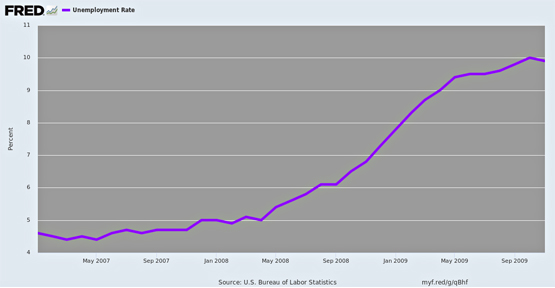 Indeed, the shocker will come on the first Friday of May when the monthly number of newly unemployed workers will be reported for April.

Indeed, when you add in the automatic stabilizer outlays to the $2.2 trillion Everything Bailout, the hemorrhage of Federal spending and borrowing will be damn near incalculable.

By the end of April, for instance, there will easily be 15 million continuing unemployment insurance claims: Even under pre-existing eligibilities and benefit levels (which were massively expanded by the Everything Bailout) the annualized run rate of outlays would rise from $28 billion in FY 2019 to upwards of $250 billion. 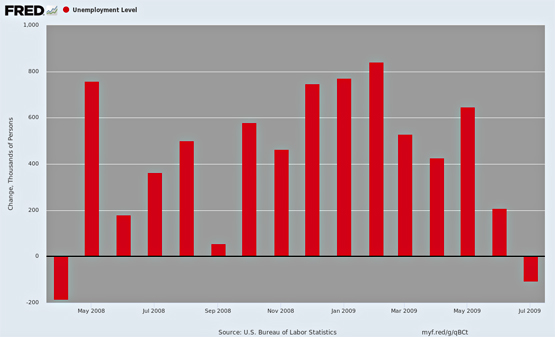 In short, this is merely not your grandfather’s recession; it’s actually a Bubble Finance era Doomsday Machine.

With the establishment media keeping the US economy on lockdown – and we mean that literally, as even Dr. Fauci is now saying there should be no relaxation of the economic freeze until there are zero new cases and zero deaths – and the Trumpified GOP keeping the spending machine and Fed printing press at full throttle until at least the November election, it is truly impossible to imagine the level of madness ahead.

The tragedy, of course, is that the blistering fiscal and financial calamity ahead is totally unnecessary. Public health measures to contain the virus until the summer heat kills it off could be far more targeted and less intrusive via a policy of protective isolation for the vulnerable populations, and maximum flexibility and personal protection (masks, gloves etc.) for the workers and participants in daily commerce.

One response to “Not Your Grandfather’s Recession, by David Stockman”