COVID-19: Seven facts that tell us Illinoisans can and must get back to work, by Ted Dabrowski and John Klingner

Illinoisans (and everybody else) should never have been involuntarily idled. From Ted Dabrowski and John Klingner at wirepoints.org:

On March 20, Illinois Gov. J.B. Pritzker signed an executive order requiring residents to stay at home in response to COVID-19. With sparse and inconsistent data to go on, the state acted in an abundance of caution. And facing fear and uncertainty, the general public accepted shutdown orders that have resulted in an economic collapse.

But today, the situation is far different. We now have far more data about the crisis and yet the state’s overall shutdown strategy hasn’t materially changed.

For one, the data tells us who’s most at risk from COVID-19, and it’s not the general public. It’s overwhelmingly those with preexisting conditions, especially the elderly. They’re the ones that need to be far better protected, and if necessary, quarantined.

We’ve also learned that Illinois had more than enough health care resources to meet our peak needs. Overall beds, ICU beds and ventilators are all in excess capacity.

And that means the general public should phase back into work immediately, while there’s still work to be had. The economic data shows how quickly the current lockdown is killing jobs and livelihoods. Economic recession and depressions cause deaths of their own.

Gov. Pritzker has seemingly ignored all the above. In fact, he recently extended Illinois’ shutdown by another month – through May 30.

1. It’s those with preexisting conditions, especially the elderly, that are most at risk.

Illinois’ death data for COVID-19 shows the elderly are most in danger.

Nearly 1,950 Illinoisans have died of the virus as of April 26th. Of those victims, 85 percent of them were age 60 or older. 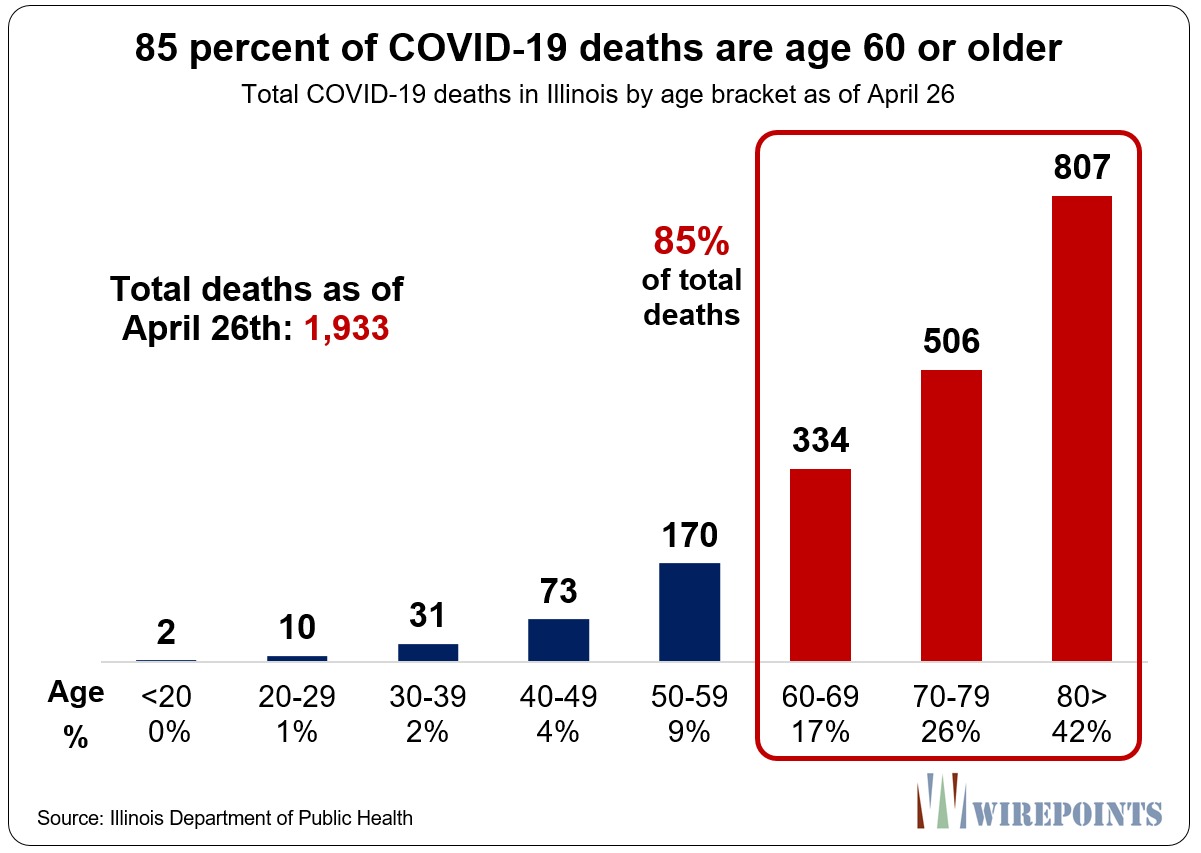 The group most in danger from the virus, however, is even more narrow than that. The overwhelming majority of people who have been hospitalized or have died due to COVID-19 had other underlying conditions, including hypertension, diabetes and coronary disease – known as comorbidities.

Unfortunately, Illinois doesn’t release its preexisting condition or comorbidity numbers, so we look at other states and national data for estimates. A study published in a CDC report, for example, finds “that the majority of those hospitalized due to COVID-19 have preexisting conditions—about 90% of patients, or nearly all, had one or more underlying conditions.”

The state of New York publishes its comorbidity data daily. It shows that of the 16,966 deaths in New York as of April 25th, 89 percent had at least one comorbidity.

So we know with more precision today who is at risk: those with underlying medical conditions, especially the elderly. It’s not the public at large.

The general public is even less at risk when you consider that nearly 35 percent of Illinois’ deaths came from retirement homes. A WBEZ analysis found that 625 of the state’s 1,795 deaths as of April 24 were nursing home residents.

The percentage is even higher elsewhere in the country. Massachusetts reports that half of all deaths were elderly in long-term care facilities. And worldwide, the London School of Economics reports that 40 to 60 percent of virus deaths in Italy, Spain, France, Ireland and Belgium have been linked to retirement homes.

When this crisis is finally over, we’ll look back at the failure to protect retirement homes as one of the bigger tragedies of COVID-19.

3. Younger Illinoisans make up just 6% of the state’s deaths.

Younger Illinoisans face a far lower risk than originally feared. That’s reflected in who has died so far. The deaths by age group for those Illinoisans younger than 50, as of April 26, was: 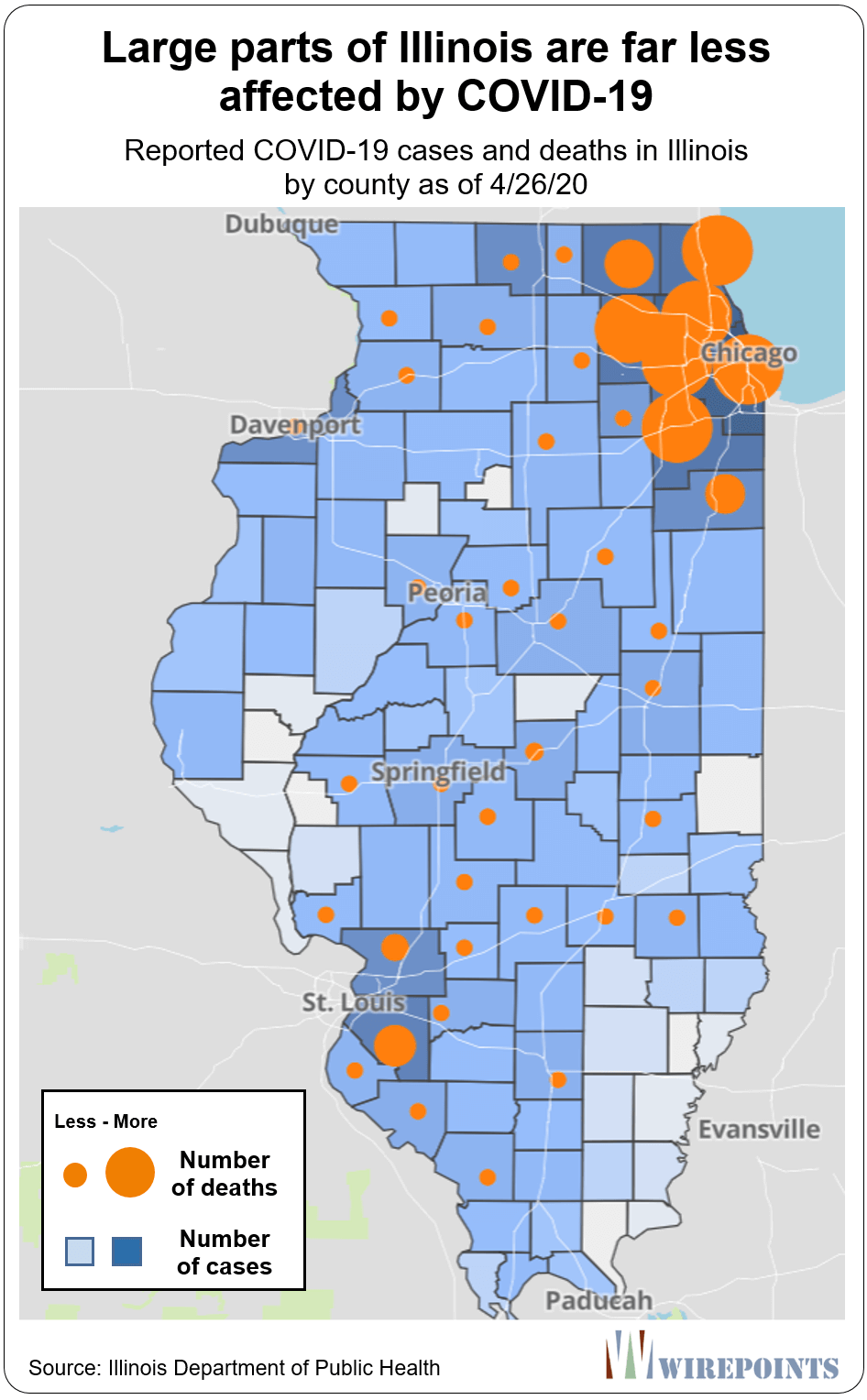 Continuing a one-size-fits-all shutdown policy for the entire state makes little sense after spending a full month getting the curve under control.

Cook and the collar counties have the vast majority of cases and deaths, while only a few of the outbreak “hotspots” are located downstate. Some of that difference is due to simple population density. Cook County has a population of over 5.2 million people and 3,200 residents per square mile.

In contrast, downstate places like Putnam County – which has no recorded cases of COVID-19 to date – has a total population of 6,000 people and just 34 residents per square mile.

Given what we know about the risk factors covered above, the rules for relaxing the shutdown should be far different for businesses in Putnam County vs. Cook County.

Illinois’ outbreak appears to have peaked, and thankfully, the state never ran out of hospital beds, ICU beds or ventilators. In fact, Illinois continues to build an excess supply.

Take ventilators. Gov. Pritzker wanted to have as many as 7,000 ventilators ready for the expected peak in hospitalizations. Fortunately, Illinois never came close to that need as patients on machines peaked recently. On April 25th, the state only used 43 percent of its more than 3,300 ventilators. Nearly 1,900 machines were not being used.

Intensive care unit beds were yet another resource that projections warned Illinois could run short of. That never happened, either. Despite the growth in patients, Illinois has more ICU beds available today than it did on April 3rd when state reporting began.

The trajectory of total hospital beds has been largely the same. Despite concerns, Illinois never came close to a shortage of beds.

6. Soon nearly a million Illinoisans will be unemployed.

More than a month after this crisis began, we now know just how much damage the shutdown is causing to peoples’ lives and their livelihoods. After just five weeks, 26.5 million total Americans have filed for unemployment benefits, up from just 5.8 million from before the crisis began.

In Illinois, a total of over 730,000 workers have filed for unemployment benefits since the middle of March, over 12 percent of the state’s workforce.

If Illinois ends up matching the St. Louis Fed’s unemployment predictions for the nation, 32 percent of Illinois’ workforce, or more than 2 million people, could end up unemployed.

Beyond workers, the shutdown is inflicting incalculable harm to small businesses and entrepreneurs. It could end up destroying an entire generation of risk-takers and job creators.

Yes, the federal government has passed several stimulus packages to help businesses survive, but all that funding is little more than a financial band-aid. The world’s most complex economic system is still crumbling and more and more vital linkages are destroyed every day.

7. Recessions and depressions cause deaths of their own.

Interwoven with economic decline are drug abuse, depression, domestic violence and deepening poverty that destroy families. Studies of past recessions show just how much suffering Americans will endure.

“Job losses cause extreme suffering. Every 1 percent hike in the unemployment rate will likely produce a 3.3 percent increase in drug-overdose deaths and a 0.99 percent increase in suicides, according to data from the National Bureau of Economic Research and the medical journal Lancet…If unemployment hits 32 percent, some 77,000 Americans are likely to die from suicide and drug overdoses as a result of layoffs.”

Based on Illinois’ share of the nation’s population, the state could experience 3,000 additional drug-related deaths and suicides.

On top of that, there’s the damage and deaths due to additional alcohol abuse. An estimated 88,000 Americans already die from alcohol-related causes annually.

Domestic violence is also on the rise up as the stay-at-home orders continue. An NBC News report earlier this month reported that cities across the nation have seen upticks in domestic violence. Houston’s police experienced a 20 percent increase in calls in March, while Charlotte saw an increase of 18 percent over last year. Phoenix’s volumes are up 6 percent.

Expect all of the above to worsen if the country is plunged into an economic downturn rivaling the Great Depression.

For many ordinary Illinoisans, fear over the killer virus is now morphing into a fear of survival without a job or income. The health data from the past month bolsters their desire to get back to work, while worsening economic data supports their urgency to do so.

The deaths and despair that will ensue under a severe recession or depression should be a part of the science Gov. Pritzker says he’s using to make his health and economic decisions. So far, there’s not much evidence that they are part of his calculus.

The biggest issue in going back to work, of course, is how to protect those with underlying conditions, especially those in retirement homes and multi-generational households. Focus all the health and financial resources on them. Many will protect themselves via self-isolation, but many may need support depending on their health risk, income level, multi-generational homes, etc. And for all those who do return to work as the economy reopens, they have a special responsibility to those vulnerable populations.

Read more about the impact of COVID-19:

2 responses to “COVID-19: Seven facts that tell us Illinoisans can and must get back to work, by Ted Dabrowski and John Klingner”