Governments crank up fear because people will put up with a lot more government when they think it will alleviate or eliminate the fear. From Doug Casey at internationalman.com: 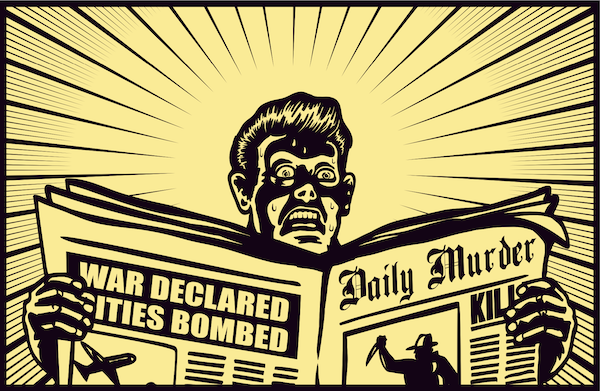 International Man: The mainstream media can dial up the fear in society much like you can with the thermostat in your house. And right now, they seem to be cranking up the fear to hysterical levels.

Governments are able to enact radical policies when people are fearful.

What is your take on the situation and the media’s role in it?

Doug Casey: The great American journalist H.L. Menken once said, “The whole aim of practical politics is to keep the populace alarmed (and hence clamorous to be led to safety) by menacing it with an endless series of hobgoblins, all of them imaginary.”

Fear is one of the most powerful and primal emotions, and government has always used fear to unite the people behind it. Government—which produces nothing—only exists because of fear. Fear of foreigners is allayed by its army. Fear of domestic chaos is allayed by its police.

The media is an ideal way to transmit fear. The media has transformed itself into the government’s lapdog. It has the same talking points and communicates “the narrative” in the same way. Government and media have always worked hand in glove, of course, but today more than ever. There are no longer thousands of independent newspapers scattered across the country, just a few conglomerates that control all significant print and electronic media.

One thing that hasn’t changed as far as the media is concerned is the old saying “if it bleeds, it leads.” Fear, danger, and violence make stories interesting and exciting. They make events urgent—and most important, they make people want to buy newspapers and visit their websites.

I don’t trust neither the government—which has its own interests and enforces them with coercion—or the media which, if it knows what’s good for it, either touts the party line or acts like a “loyal opposition” to give readers the impression they actually have real choices.

It’s a dishonest and disgusting charade.