Fauci Knew Boosters Could Cause Immune Tolerance; Pushed for them Anyway, by Igor Chudov

Did “the science” have our best interests at heart?

SUMMARY: This post presents evidence proving that Tony Fauci and immunologists knew that mRNA Covid boosters could cause disease-enabling immune tolerance. Despite that documented knowledge, they inexplicably pushed to boost people repeatedly, ruining their immunity to Sars-Cov-2.

At the Speed of Science

7 Facts Fauci Knew But Hid From the Public, by James Lyons-Weiler, Ph.D.

In a world with even a semblance of justice, the headline’s 7 facts would be incorporated into an indictment against Fauci. From James Lyons-Weiler, Ph.D., at childrenshealthdefense.org:

Rep. Jim Jordan (R-Ohio) this week listed seven key facts about the COVID-19 pandemic and the government’s response to it that, according to Jordan, Dr. Anthony Fauci knew but didn’t tell the public.

Editor’s note: House Republicans on Monday commissioned a special investigative panel focused on the coronavirus pandemic during which they hope to press scientists and federal officials, including Dr. Anthony Fauci, about the origin of the public health crisis and the government’s response to it.

The following is a paraphrase of the opening round — the warning shot — by U.S. Rep. Jim Jordan (R-Ohio) Tuesday in which he used his time to outline seven facts that Dr. Anthony Fauci knew, and, more importantly, what Fauci did, and did not do, when he was made aware of these facts.

This does not bode well for Fauci and those involved in the cover-up.

The Coming Grand Jury Indictments of 2023 and Beyond, by Dr. Joseph Sansome

There is no assurance of grand jury indictments for the criminals of the last three years, but at least the prospect can no longer be dismissed out of hand as wishful thinking. From Dr. Joseph Sansome at josephsansome.substack.com:

Elon Musk continues to release incriminating files from Twitter that shows criminal activity. Censoring citizens regarding Covid, Ukraine, and Covid 19 bioweapons, all at the behest of the government. Covering up sensitive political information regarding Hunter Biden’s laptop, and certainly, anything to do with fraudulent elections.

Recently, Elon Musk called out gain of function research, promoted by  Anthony Fauci, as a bioweapon. Musk is correct. Gain of function research is bioweapon development. Dr. Francis Boyle, an international and criminal law expert, has been pointing out for quite some time that Fauci and others are criminally implicated in the development of an offensive biological weapon in a scientific paper entitled,  A SARS-like cluster of circulating bat coronaviruses shows potential for human emergence, published in 2015. Dr. Boyle, is also author of the 1989 Biological Weapons and Antiterrorism Act, and in his book,  Resisting Medical Tyranny, lays out a legal strategy of bypassing corrupt federal courts and seeking indictments in state courts. Statewide grand juries, utilizing state attorney generals, as well as grand juries utilizing state attorneys, and even county prosecutors where applicable, are part of this strategy. Indictments for murder and conspiracy to commit murder can be sought. Dr. Boyle asserts that once the first indictment comes in the house of cards will fall. This is also mentioned in my open letter to Attorney General Ashley Moody.

Elon Musk wants science to get thrashed out on Twitter, as science has been thrashed out for centuries. From the Daily Wire News at dailywire.com:

Twitter CEO Elon Musk announced Wednesday that the social media company’s new official policy will not penalize users for legitimately questioning scientific claims and narratives that are promoted in the media.

The statement from Musk comes as he has taken multiple shots at leftists this week for buying into mainstream media narratives.

In a subsequent tweet, Musk responded to professor Gad Saad, who posted a video mocking Dr. Anthony Fauci and his decision to retire as Republicans are set to take over the House of Representatives next week.

“Anyone who says that questioning them is questioning science itself cannot be regarded as a scientist,” Musk said in response to the video about Fauci.

Fauci will be as hard to get rid of as the sidewalk gum on which you stepped. From Lloyd Billingsley at amgreatness.com:

Without crucial reforms, the NIAID boss Anthony Fauci will be neither gone nor forgotten.

Seeking exceptional candidates: NIH posts job ad to replace Fauci,” headlined a November 23 Helio report, which asked “experts” what qualities they would like to see in the person who replaces Dr. Fauci, head of the National Institute of Allergy and Infectious Diseases (NIAID) since 1984.

One of the experts was Dr. Peter Hotez, professor of pediatrics and molecular virology at Baylor College of Medicine. Hotez earned a degree in molecular biophysics from Yale, a doctorate in biochemistry from Rockefeller University, and an MD from Weill Cornell Medical College.

Cornell is where Anthony Fauci got his MD, and the professor is a huge fan.

“Replacing Dr. Fauci after so many decades will be daunting,” Dr. Hotez explained, “not only because Tony was a superb administrator and scientist, but also because he helped the U.S. Congress and executive branch understand the importance of infectious disease research to national and global security. Dr. Fauci’s replacement must not only be an important American scientist but also an adept science explainer, convener, and advocate.”

Dr. Fauci is also “a punching bag for the far right since the earliest days of the outbreak,” contended Dr. Hotez in “The Unique Terror of Being a Covid Scientist After January 6.” That June 21, 2021, Daily Beast commentary was subtitled “It’s no coincidence that one of the first guilty pleas in connection with the Capitol riot was of an anti-vaxxer.”

Hotez charges that in 2020 “the Trump White House embarked on a deliberate antiscience disinformation campaign.” The “far-right fringe” mounted “attacks” on Fauci and Dr. Peter Daszak who heads the EcoHealth Alliance.

“I agree with Dr. Fauci when he says that these personal attacks represent an assault on American science,” Hotez argued, but there was more to it. “Ultimately, the far-right hunt for biomedical scientists represents an essential element for totalitarian control that goes back almost 100 years. In this context courage and standing up for democratic values demands that the American people throw their full support behind scientists and scientific institutions. To do otherwise is to capitulate to the forces of insurrection.”

How to Save Your Skin, According to Bankman-Fried and Fauci, by Jeffrey A. Tucker

Jeffrey A. Tucker has performed a miracle. He has taken two stomach-churning people and their skullduggery and made them funny. From Tucker at brownstone.org:

We are being gifted with a series of extremely impressive displays of accountability avoidance. They have been virtuosic acts, ones for the history books. I speak of the strange rhetorical symmetry between Anthony Fauci and Sam Bankman-Fried and their responses under questioning for bad actions that no one denies except themselves.

I’ve watched what feels like a hundred hours of interviews and read transcripts of many more. They are enormously frustrating. They both specialize in justifying the small things while systematically overlooking the big picture for which they are wholly responsible. They speak in a passive voice about mistakes made but bounce off that quickly to fob off the blame for the results on everyone but themselves.

What appears below is a kind of composite of them both. It’s written as farce but an oddly realistic one.

Let’s say that a person named Sam Fauci-Fried has been accused of two crimes: theft of socks from WalMart and forcibly preventing children from attending school.

Here is Sam under questioning.

“Did you or did you not steal socks from WalMart?”

“It’s an excellent question, and thank you for asking it. So, as I think back on the events under consideration here, we need first to understand the circumstances in which there are many pairs of socks, far more than were being sold, and also a genuine opportunity for a broader and frankly more socially aware distribution of foot covering through the community. This is where we and many others in our enterprise got involved.”

Anthony Fauci is a charlatan and thousands have seriously injured themselves or died following his recommendations. From Steve Watson at summit.news: 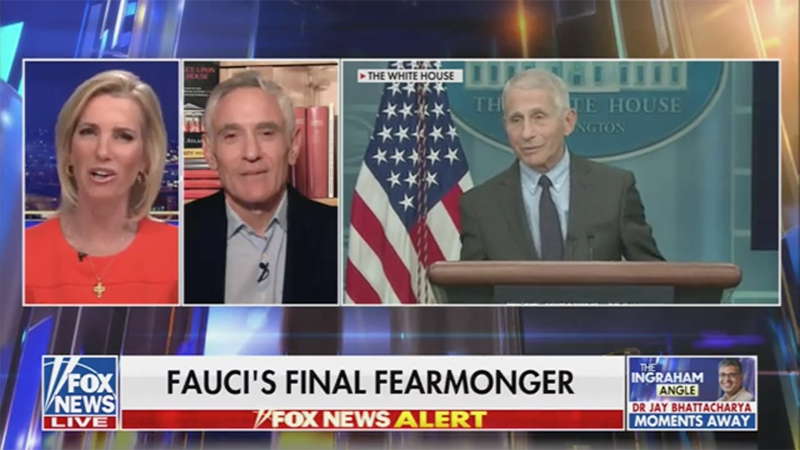 Atlas further charged that Fauci’s policies “were implemented and those policies shifted the burden of this illness from the affluent to the poor, and incurred massive harm on our children, psychological damage, long-lasting damage, an obesity crisis, and we really haven’t seen tip of the iceberg on that damage to children, and again, worse on low income and poor kids.”

‘The Real Anthony Fauci’ — The Movie, by Dr. Joseph Mercola

One Man Wielded the Most Powerful Weapon Against the World, by Dr. Joseph Mercola

Biosecurity may enslave or kill us all. From Dr. Joseph Mercola at theburningplatform.com:

Anthony Fauci: From AIDS To COVID-19, A Pharma Love Story, by Lorenzo Puertas

Anthony Fauci is owned lock, stock, and barrel by Big Pharma. From Lorenzo Puertas at The Epoch Times via zerohedge.com:

After forty-eight years of leading the U.S. government’s responses to infectious diseases, Dr. Anthony Fauci recently announced his plans to retire at the end of the year. His story warrants a closer look for what it tells us about American politics, business, and health care.

For decades before his recent fame, Fauci has been a medical researcher credited with important new understandings of the human immune response, particularly in HIV and AIDS. He also helped develop therapies for several previously fatal diseases, including a treatment of vasculitis which turned a 98 percent mortality rate into a 93 percent survival rate.

For most of his career, he has been the world’s most-cited researcher on AIDS and infectious diseases. He has received many awards, including the Presidential Medal of Freedom.

Ironically, Fauci has also presided over a decades-long decline in the overall health of American citizens. During his time in public health, a great number of chronic illnesses have become commonplace. Food allergies, autoimmune diseases, and cancer now affect more than half of American children. Autism, once rare, now affects 1 in 44 children.