From Blue Shirts to Brown, by Alan Hamilton

Australia wages all out war against germs and germ restriction violators. From Alan Hamilton at off-guardian.org:

On at least 3 or 4 occasions in the past week we’ve had to smash the windows of people in cars and pull them out of there so they could provide their details – because they weren’t telling us where they were going; they weren’t adhering to the chief health officer’s guidelines, they weren’t providing their name and their address.”
Shane Patton, Victorian Chief Police Officer 04/08/2020

These protests are a legitimate and rational response to despotic and often unconstitutional laws that unscientifically characterize every member of society as a bio-security risk to everyone else. They are also a protest against law enforcement bureaucracies that identify responsible, civic-minded citizens as criminals if they dare to question such laws or even worse, step out of their homes in defiance of the lockdown to register their dissent.

The Australian protests occurred peacefully and without incident in most places, including Brisbane where I participated. But it was not the case in Victoria where a State of Disaster has been declared due to the ‘extraordinarily high’ number of active Covid cases there.

On the eve of the nationwide protests, mainstream news reported on the harrowing state of affairs in Victoria which was suffering from hundreds of active cases but, as it turns out, had only 20 people in intensive care suffering from covid-related illnesses. This is in a state of 6.35 million people that has 58 metropolitan hospitals and 69 rural hospitals and District Health services.

Aussies are starting to protest Covid-19 totalitarianism. Good for them. From Tyler Durden at zerohedge.com:

Social unrest surged Saturday across Melbourne and Sydney, as hundreds of protesters took to the streets, defying arcane coronavirus lockdowns that have been in effect for nearly five weeks following a spike in virus cases and deaths. 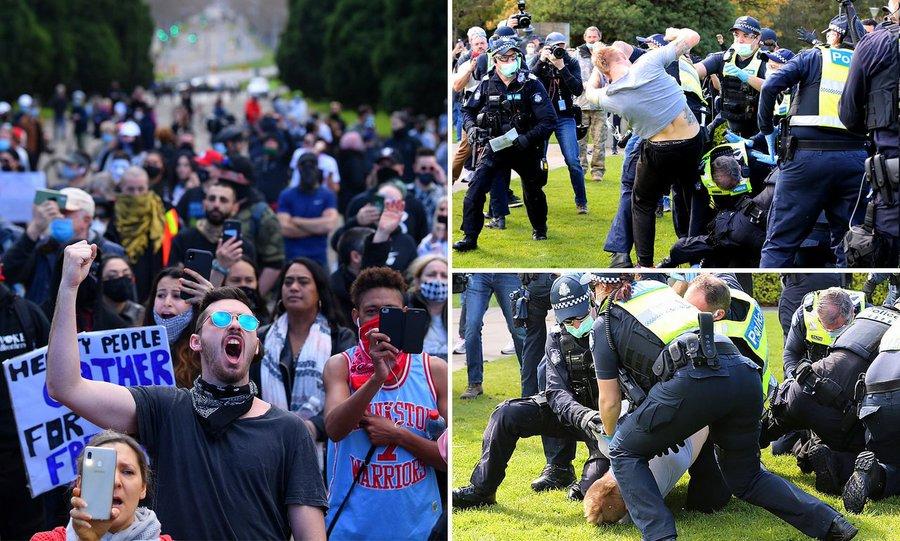 Anti-lockdown groups gathered at the Shrine of Remembrance, a war memorial in Melbourne, Victoria, Australia, with some demonstrators wearing no masks, holding signs, and were heard chanting “freedom” and “human rights matter,” reported Reuters.

Australia’s spirits have ‘been crushed’ by its COVID-19 response: Alan Jones

Australia has some of the most stringent coronavirus restrictions in the world.

It’s never easy for those who consistently tell the truth. Australia had produced three such heroes. From Rick Sterling at consortiumnews.com:

They span three generations and give their country reason to be enormously proud, writes Rick Sterling. All have depended on freedom of the press, which is now at stake.

Wilfred Burchett lived from 1911 to 1983. He was a farm boy and his experience in the Depression shaped his dislike of oligarchs and preference for the poor.  He went to Europe trying to volunteer for Republicans in the Spanish Civil War but that did not work out.  Instead, he assisted Jews escaping Nazi Germany. 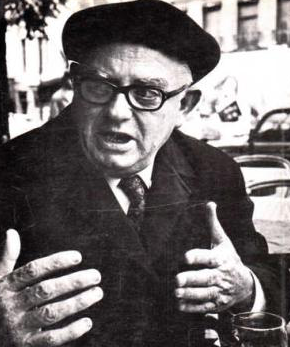 Wilfred Burchett. (From the cover of his autobiography, “At the Barricades.”)

Burchett became a journalist by accident. Having seen the reality in Germany, he started writing many letters to newspaper editors. One of the editors took note of his fluid writing style and intensity. They contacted him to ask if he would like to report for them. Thus began a 40-year writing career.

END_OF_DOCUMENT_TOKEN_TO_BE_REPLACED

China, USA and the Geopolitics of Lithium, by F. William Engdahl

The US and China are in a global scramble to line up lithium supplies. From F. William Engdahl at globalresearch.ca:

For several years since the global push to develop mass-scale Electric Vehicles, the element Lithium has come intofocus as a strategic metal. Demand is enormous in China, in the EU and in the USA at present, and securing control over lithium supplies is already developing its own geopolitics not unlike that for the control of oil.

For China, which has set major targets to become the world’s largest  producer of EVs, developing lithium battery materials is a priority for the 13th Five-Year Plan (2016-20) period. Though China has its own lithium reserves, recovery is limited, and China has gone to secure lithium mining rights abroad.

Talison Lithium Inc. is the world’s largest primary lithium producer. Their Greenbushes site in Australia produces today some 75% of China’s lithium demands and about forty percent of world demand. This as well as other vital Australian raw materials, has made relations with Australia, traditionally a firm US ally, of strategic importance to Beijing. As well, China has become the largest trade partner for Australia.

END_OF_DOCUMENT_TOKEN_TO_BE_REPLACED

New Study: China Would Beat US Military in Pacific, by Dave DeCamp

Predictably, the study calls for higher defense spending. From Dave DeCamp at antiwar.com:

The United States Studies Centre (USSC), a research center based at the University of Sydney in Australia, released a study titled, “Averting Crisis: American Strategy, Military Spending and Collective Defence in the Indo-Pacific.” The study makes the argument that the US would not be able to defeat China in a military confrontation in the Indo-Pacific.

The USSC is funded by the Australian government, over the past five years one percent of their budget came from the US government and eight percent came from “US-based foundations, companies or individuals.”

The three researchers whose names are on the study are part of the USSC’s Foreign Policy and Defence program. The program lists its partners as the Australian government, The US defense company Northrop Grumman, the French defense company Thales and the US State Department.

The study says the US is disadvantaged in the region because of, “ongoing wars in the Middle East, budget austerity, underinvestment in advanced military capabilities and the scale of America’s liberal order-building agenda.”

The researchers often cite the 2018 Department of Defense’s National Defense Strategy (NDS). The NDS share the researcher’s concerns with respect to the Indo-Pacific region and shows a desire to prioritize the threats of China and Russia. The NDS says, “China is leveraging military modernization, influence operations, and predatory economics to coerce neighboring countries to reorder the Indo-Pacific region to their advantage.”

END_OF_DOCUMENT_TOKEN_TO_BE_REPLACED

Julian Assange’s indictment might have opened the floodgates for global persecution of journalists by governments. From Caitlin Johnstone at caitlinjohnstone.com:

The Australian Federal Police have conducted two raids on journalists and seized documents in purportedly unrelated incidents in the span of just two days.

Yesterday the AFP raided the home of News Corp Australia journalist Annika Smethurst, seeking information related to her investigative report last year which exposed the fact that the Australian government has been discussing the possibility of giving itself unprecedented powers to spy on its own citizens. Today they raided the Sydney headquarters of the Australian Broadcasting Corp, seizing information related to a 2017 investigative report on possible war crimes committed by Australian forces in Afghanistan.

In a third, also ostensibly unrelated incident, another Australian reporter disclosed yesterday that the Department of Home Affairs has initiated an investigation of his reporting on a story about asylum seeker boats which could lead to an AFP criminal case, saying he’s being pressured to disclose his source.

Five nations have shredded the law in their vendetta against Julian Assange. From Raúl Ilargi Meijer at the automaticearth.com:

With the news that Julian Assange is “wasting away” in Belmarsh prison hospital, and with UN rapporteur Professor Nils Melzer’s report detailing how this happens, I’m once again drawn towards the lawlessness that all “authorities” involved in his case have been displaying, and with impunity. They all apparently think they are literally above the law. Their own laws.

But they can’t be, nowhere, not above their respective national laws nor the international ones their countries have signed up to. They can’t, because that would instantly make any and all laws meaningless. So you tell me where we find ourselves today.

There’s this paragraph in an article by Jonathan Cook entitled Abuses Show Assange Case Was Never About Law, which lists “17 glaring anomalies in Assange’s legal troubles”, that sums it all up pretty perfectly:

Australia not only refused Assange, a citizen, any help during his long ordeal, but prime minister Julia Gillard even threatened to strip Assange of his citizenship, until it was pointed out that it would be illegal for Australia to do so.

See, Cook is already skipping a step there. Gillard didn’t take Assange’s citizenship away, because that is against Australian law, but it’s just as much against Australian law for a government to let one of its citizens rot in some kind of hell. Still, they did let him rot, but as an Australian citizen. At that point, what difference does anything make anymore?

END_OF_DOCUMENT_TOKEN_TO_BE_REPLACED

Governments won’t come right out and say so, but there isn’t a government in the world who doesn’t want China’s social control programs. From Joshua Philipp at theepochtimes.com:

Australia is preparing to debut its version of the Chinese regime’s high-tech system for monitoring and controlling its citizens. The launch, to take place in the northern city of Darwin, will include systems to monitor people’s activity via their cell phones.

The new system is based on monitoring programs in Shenzhen, China, where the Chinese Communist Party (CCP) is testing its Social Credit System. Officials on the Darwin council traveled to Shenzhen, according to NT News, to “have a chance to see exactly how their Smart Technology works prior to being fully rolled out.”

In Darwin, they’ve already constructed “poles, fitted with speakers, cameras and Wi-Fi,” according to NT News, to monitor people, their movements around the city, the websites they visit, and what apps they use. The monitoring will be done mainly by artificial intelligence, but will alert authorities based on set triggers.

Just as in China, the surveillance system is being branded as a “smart city” program, and while Australian officials claim its operations are benign, they’ve announced it functions to monitor cell phone activity and “virtual fences” that will trigger alerts if people cross them.