One weird sign of trouble in the banking sector, by Simon Black

Banks have suddenly acquired heaps of bad loans as coronavirus restrictions have cost millions the ability to repay their loans. Consequently, banks are not making many new loans. From Simon Black at sovereignman.com:

It was only a few generations ago that most people spent their entire lives within a few miles of where they were born.

They grew up, lived, worked, and retired, all in the same place. And that was normal.

Travel and relocation didn’t really become commonplace until after World War II. But even then, the most common reason people moved was because of a job.

And it has remained that way for decades; people tend to choose where they live because it’s close to the place that they work.

But honestly that’s a completely outdated model, and I’ve been writing about this for years:

It’s the 21st century. Whether they realize it or not, countless people have the flexibility to live wherever they want (within reason) while still being able to do their jobs.

Few people ever thought about this… until Covid. And then suddenly tens of millions of people were forced to work from home.

I have no doubt a lot of people hated every minute of it. Some people are wired that way– they need a refuge… a daily escape, to be around other people in an environment outside of the home.

But others absolutely loved it. No more commute, no traffic, more time with the family.

One of my attorneys has an office in midtown Manhattan, but he lives in Connecticut. He told me that working from home saved him more than 2 hours a day.

END_OF_DOCUMENT_TOKEN_TO_BE_REPLACED

What happens when insolvent banks hold the bonds of insolvent governments? That’s a question that will soon confront Europe. From Don Quijones at wolfstreet.com:

What will Draghi do?

After two controversial bank rescue operations that stretched Europe’s bank resolution laws beyond recognition, things are beginning to look a little less desperate for Italy’s banking sector. The initial market reaction to the interventions has been overwhelmingly positive. For the first time in years Italian banks are leading Europe’s Stoxx 600 bank Index — upwards, not downwards.

Even the recent announcement of a capital raising and bad-loan sale plan by troubled bank Banca Carige was met with enthusiasm, sending its shares up 30%.

One of the Italian banking sector’s biggest problems — its sky-high bad loan ratio — will soon be under control, claimed Bank of Italy Governor Ignazio Visco in a recent speech to the Italian banking association. The interventions in Monte dei Paschi di Siena and the two Veneto-based banks, Popolare di Vicenza and Veneto Banca, will take almost €50 billion of bad loans off their balance sheets, leaving about €275 billion in the system. Within a year Italy’s non-performing loan ratio will be down to an almost respectable 8% of total loans, Visco said.

To that end the government will create a new semi-publicly owned national asset management company (NAMC) that will help “develop the market for bad loans.” To lend the scheme legitimacy, European finance ministers rushed through approval of NAMCs for all Eurozone economies last week.

These NAMCs will vacuum up some of the nonperforming loans from bank balance sheets and sell them at a discount on the secondary market. According to Visco, the only way such a scheme would be “useful” is if it is applied on a purely voluntary basis and the assets are transferred at a price “not too far from their real economic value” — i.e. the value assigned to them by the banks. Untold billions of euros of taxpayer funds will be used to make up the difference between what market participants are willing to pay for the banks’ impaired assets and the price the banks want for them. This is the more covert part of Italy’s publicly funded bank rescue program.

The European banking crisis (and make no mistake, European banks are in a crisis) will follow the same story line as all banking crises: with taxpayers bailing out the banks. From Don Quijones at wolfstreet.com:

If the ECB scales back stimulus, banks face even greater risk of collapse. But now there’s a new solution.

Events are moving so fast in Europe these days, it’s almost impossible to keep up. While much of the attention is being hogged by political developments, including the election in the Netherlands, Reuters published a report warning that the European banking sector may face even higher bad loan risks if the ECB begins to scale back its monetary stimulus programs, something it has already begun, albeit extremely tentatively.

The total stock of non-performing loans (NPL) in the EU is estimated at over €1 trillion, or 5.4% of total loans, a ratio three times higher than in other major regions of the world.

On a country-by-country basis, things look even scarier. Currently 10 (out of 28) EU countries have an NPL ratio above 10% (orders of magnitude higher than what is generally considered safe). And among Eurozone countries, where the ECB’s monetary policies have direct impact, there are these NPL stalwarts:

That bears repeating: in Greece and Cyprus, two of the Eurozone’s most bailed out economies, virtually half of all the bank loans are toxic.

Then there’s Italy, whose €350 billion of NPLs account for roughly a third of Europe’s entire bad debt stock. Italy’s government and financial sector have spent the last year and a half failing spectacularly to come up with a solution to the problem. The two “bad bank” funds they created to help clean up the banks’ toxic balance sheets, Atlante I and Atlante II, are the financial equivalent of bringing a butter knife to a machete fight. So underfunded are they, they even strugggled to hold aloft smaller, regional Italian banks like Veneto Banca and Popolare di Vicenza, which are now pleading for a bailout from Rome, which in turn is pleading for clemency from Brussels. 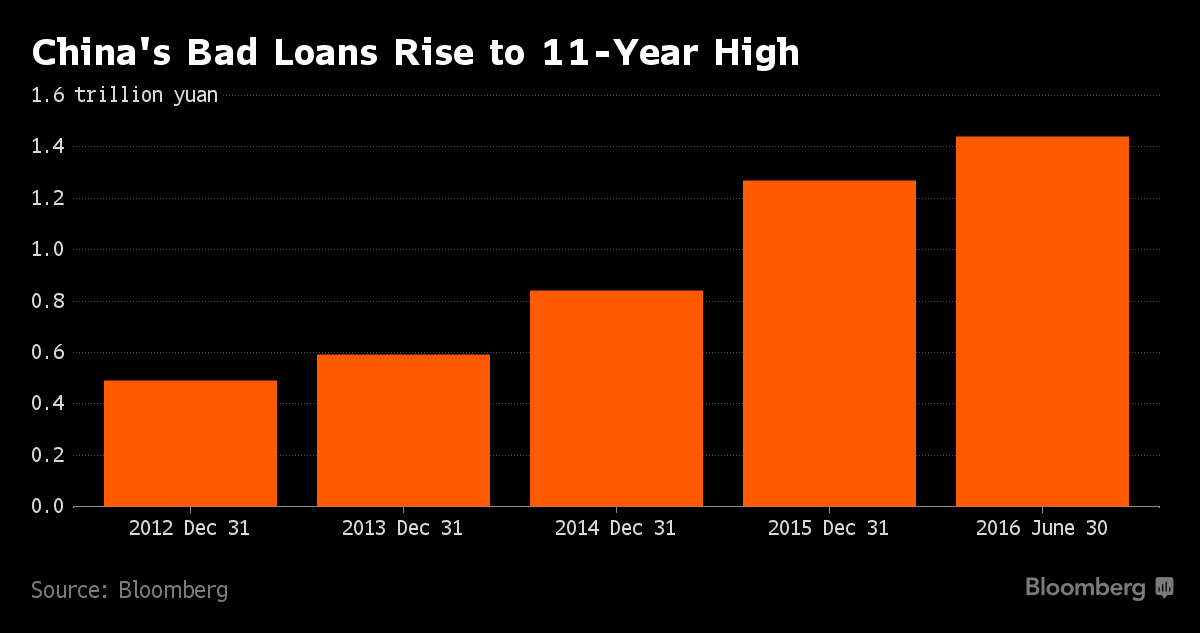 Chinese banks’ troubled loans swelled to almost 4 trillion yuan ($628 billion) by the end of September, more than the gross domestic product of Sweden, according to figures released by the industry regulator.

Banks’ profit growth slumped to 2 percent in the first nine months from 13 percent a year earlier, according to data released on Thursday night by the China Banking Regulatory Commission.

CHINA’S DEMAND FOR CARS HAS SLOWED

For much of the past decade, China’s auto industry seemed to be a perpetual growth machine. Annual vehicle sales on the mainland surged to 23 million units in 2014 from about 5 million in 2004. That provided a welcome bounce to Western carmakers such as Volkswagen and General Motors and fueled the rapid expansion of locally based manufacturers including BYD and Great Wall Motor. Best of all, those new Chinese buyers weren’t as price-sensitive as those in many mature markets, allowing fat profit margins along with the fast growth.

No more. Automakers in China have gone from adding extra factory shifts six years ago to running some plants at half-pace today—even as they continue to spend billions of dollars to bring online even more plants that were started during the good times. The construction spree has added about 17 million units of annual production capacity since 2009, compared with an increase of 10.6 million units in annual sales, according to estimates by Bloomberg Intelligence. New Chinese factories are forecast to add a further 10 percent in capacity in 2016—despite projections that sales will continue to be challenged.

Earlier this week, MNI suggested that according to discussions with bank personnel in China, data on lending for October was likely to come in exceptionally weak. That would mark a reversal from September when the credit impulse looked particularly strong and the numbers topped estimates handily.

“One source familiar with the data said new loans by the Big Four state-owned commercial banks in October plunged to a level that hasn’t been seen for many years,” MNI reported.

Given that, and given what we know about rising NPLs and a lack of demand for credit as the country copes with a troubling excess capacity problem, none of the above should come as a surprise.

China drove the recent economic boom, just as it is behind the recent malaise. A turnaround in Chinese demand would certainly change things but the current data does not look promising.

For China’s trade partners, it means recession today. Only Germany and the US look positioned to weather the storm. Expect the next macroeconomic leg down to start in January. Between now and then, data will continue to weaken incrementally. Expect urgent Central Bank intervention in Taiwan, Korea, Brazil, and Australia.