Roe is history. The left is furious. They ought to be contrite. By Phil Boas

Roe v. Wade was one of the most poorly reasoned Supreme Court decisions in history, and it’s distorted law and politics ever since. Good riddance. From Phil Boas at azcentral.com:

Instead of fuming, maybe Democrats should be contrite about the unearned advantage they got from Roe v. Wade

For more than a month, pro-abortion militants have been firebombing and smashing churches and anti-abortion family centers in anticipation of the U.S. Supreme Court ruling overturning Roe v. Wade.

On Friday they planned “A Night of Rage” to scream at conservative justices and to put the anti-abortion right on notice:

“To our oppressors: If abortions aren’t safe, you’re not either. Jane’s Revenge.”

The group’s name likely derives from the Jane Collective, part of the abortion underground in 1970s Chicago, reports Newsweek and Fox News.

They are the pro-abortion radicals. On Friday, slightly less-radical voices in Washington were burning on lower flame.

* “(This is) one of the darkest days our country has ever seen,” said Senate Majority Leader Chuck Schumer, D-N.Y., as reported in the Washington Post. “Millions upon millions of American women are having their rights taken from them by five unelected justices on the extremist MAGA court.” 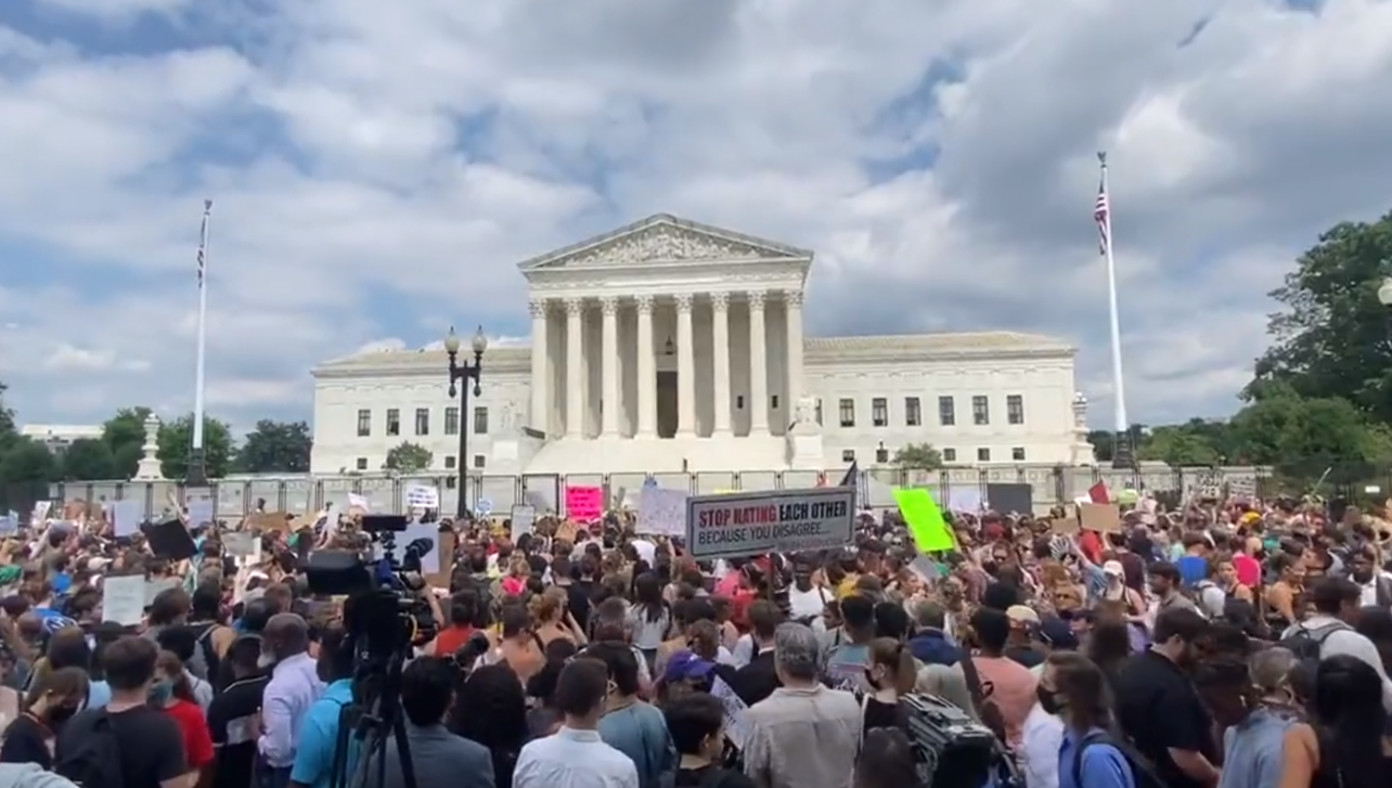 WASHINGTON, D.C.—Democrats have temporarily pushed pause on the January 6th hearings in order to lead an insurrection against the federal government.

“On January 6th, a branch of our federal government was almost overthrown because politicians used dangerous rhetoric that caused—wait, hold on everyone, I just got the update. Roe‘s been overturned!” said Representative Adam Schiff. “Okay, well if all the Republicans could please sit tight, there will be a brief recess while our Democratic caucus takes to the streets demanding we overthrow a branch of the federal government.”

After closing down their presentation entitled “How Trump Undermined Institutional Authority”, Democrats raced to join the crowd surrounding the Supreme Court building. “Rigged! Rigged decision!” shouted Senator Elizabeth Warren. “Judges must no longer be allowed to hold power! We will never abide by an illegitimate decision by an illegitimate court. Fight, fight!” she screamed as beleaguered police arrived in riot gear.

Despite the fact liberal states will still have the most permissive abortion laws in the world outside North Korea, Democrats helpfully painted the Supreme Court’s decision as a matter of life and death. “They are literally going to enslave every woman in America and force them to have 17 babies,” said Representative Ilhan Omar to a group of mentally unstable lunatics. “Which is why the Supreme Court cannot stand! To the streets!” she shouted, then returned to the House for a speech on why Trump’s words were directly responsible for violence.

At publishing time, the January 6 committee had resumed its hearings to the stark sound of no one caring.

The right to life is the ultimate natural right and if life begins at conception then Alito’s draft opinion reaches the wrong result—leaving the matter up to the states—on the wrong Constitutional rationale. From Andrew P. Napolitano at lewrockwell.com:

In the pilfered draft opinion authored by Supreme Court Justice Samuel Alito, he wrote that Roe v. Wade — the court’s 1973 opinion that prohibited the states from banning abortions during the first six months of pregnancy — and Planned Parenthood v. Casey — its 1992 opinion that modified Roe but essentially upheld it — were both egregiously wrong when decided, are egregiously wrong today and so should be overruled.

The practical effect of overruling Roe and Casey will be to return the issue of the lawfulness of abortion to the states, thus liberating all states to legislate as they wish — to ban all abortions or to permit them even AFTER the moment of birth.

Though I agree that Roe and Casey were and are wrong, I do so for reasons differently than those stated in the Alito draft. One of those reasons — that unenumerated rights today must have a long history of recognition — is deeply troubling to those who believe that personal sovereignty trumps governmental power.

The Supreme Court is not supposed to wholeheartedly embrace democracy; it is supposed to be a check on it. From Glen Greenwald at greenwald.substack.com:

The Court, like the U.S. Constitution, was designed to be a limit on the excesses of democracy. Roe denied, not upheld, the rights of citizens to decide democratically.

Politico on Monday night published what certainly appears to be a genuine draft decision by Supreme Court Justice Samuel Alito that would overturn the Court’s 1973 decision in Roe v. Wade. Alito’s draft ruling would decide the pending case of Dobbs v. Jackson Women’s Health Organization, which concerns the constitutionality of a 2018 Mississippi law that bans abortions after fifteen weeks of pregnancy except in the case of medical emergency or severe fetal abnormalities. Given existing Supreme Court precedent that abortion can only be restricted after fetal viability, Mississippi’s ban on abortions after the 15th week — at a point when the fetus is not yet deemed viable — is constitutionally dubious. To uphold Mississippi’s law — as six of the nine Justices reportedly wish to do — the Court must either find that the law is consistent with existing abortion precedent, or acknowledge that it conflicts with existing precedent and then overrule that precedent on the ground that it was wrongly decided.

Alito’s draft is written as a majority opinion, suggesting that at least five of the Court’s justices — a majority — voted after oral argument in Dobbs to overrule Roe on the ground that it was “egregiously wrong from the start” and “deeply damaging.” In an extremely rare event for the Court, an unknown person with unknown motives leaked the draft opinion to Politico, which justifiably published it. A subsequent leak to CNN on Monday night claimed that the five justices in favor of overruling Roe were Bush 43 appointee Alito, Bush 41 appointee Clarence Thomas, and three Trump appointees (Neil Gorsuch, Brett Kavanaugh and Amy Coney Barrett), while Chief Justice Roberts, appointed by Bush 43, is prepared to uphold the constitutionality of Mississippi’s abortion law without overruling Roe.

One rule to bind them all, rather than 50 different rules shaped to the population of each particular state. If indeed Roe v. Wade is overturned, it will kick the abortion issue back to the states, where it has always belonged. The thought is anathema to totalitarian liberals (but I repeat myself). From Jeff Deist at mises.org:

Inflation in the US is at forty-year highs, while interest rates on ten-year Treasury notes just hit 3 percent—signaling trouble for home buyers. Truck drivers pay more than $1,000 to fill their rigs with $5 per gallon diesel to deliver your increasingly expensive groceries and Amazon packages. Crime and homelessness skyrocket in large cities, exacerbated by virulent opioids like fentanyl and krokodil. And America’s proxy war with Russia in Ukraine gives rise to the most serious threats of nuclear strikes against the West since the 1960s.

Yet so-called social issues, from abortion to critical race theory to teaching gender identity in elementary schools, dominate our politics and media. Virtually every voter has a strong opinion on these issues, and pays far more attention to them than, say, the M2 money supply or the next Fed Open Market Committee meeting—though the latter could have a far greater impact on that voter’s life and finances.

Why is this so?

The short answer is the Supreme Court.

Five Reasons Roe Is Ripe for Reversal, by Adam Mill

Abortion may no longer be the burning issue it has been, which means Roe v. Wade might be overturned without the feared firestorm. From Adam Mill at amgreatness.com:

Now may be the perfect time to render a thoughtful decision without fear of an organized retribution from the Left.

It seems like only yesterday the Left went to war to stop Judge Brett Kavanaugh from ascending to the Supreme Court. Crackpots and charlatans flocked to the call for accusations, no matter how fictional, that might sink his nomination. The Left extracted a compromise from squishy Republicans to give the FBI enough time to frame . . . er, “investigate” Kavanaugh before proceeding to a confirmation vote. The Left is still furious at FBI Director Christopher Wray for failing to gin up a predicate for stopping Kavanaugh’s eventual confirmation.

Even then, it was very clear that the public relations assault had nothing to do with Kavanaugh’s history with the opposite sex. As they tried to weaponize sketchy sexual abuse allegations against Kavanaugh, we learned later that Democrats suppressed allegations of sexual abuse committed by their own leaders and supporters (Andrew Cuomo, Harvey Weinstein, U.S. Represenative John Conyers, former New York Attorney General Eric Schneiderman, and Bill Clinton to name just a few examples). When these leaders were held accountable, it usually followed a long period of cover-ups and denials by their political allies.

But Democrats didn’t really care about whether Kavanaugh committed sexual assault in the 1980s. It was, everyone knew, all about abortion.

So when the Supreme Court appeared to take a step toward remanding the abortion issue back to state legislatures in its decision in Whole Woman’s Health v. Reeve, I found myself bracing for the kind of hurricane of public outrage that swept the media during Kavanaugh’s confirmation. It didn’t come. Compared to the drama of the late summer of 2018, you could hear crickets. Why?

Here are five factors I believe have caused the Left to de-prioritize abortion as a political issue:

1) The decline in necessity.

If you talk to women who are pro-abortion, you might notice they often tend to be Baby Boomers. The boomers came of age in an era during which the traditional role of a woman as a child-rearer and wife was compared to slavery. Women who chose these traditional roles were made to feel inadequate when compared to those who delayed or avoided having children. In 1972, when the Supreme Court decided Roe v. Wade, women who chose motherhood had their first child at an average age of 21. Motherhood at that age required forfeiting career and education opportunities that, in the minds of feminist thinkers, prevented women from accessing the promise of equality.  That explains why abortion was such an emotional issue to women of that generation.

A Brief History of the Law of Personal Privacy and Bodily Integrity, by Andrew P. Napolitano

The law of mandatory vaccinations is not settled by a 1905 Supreme Court ruling. From Andrew P. Napolitano at lewrockwell.com:

As more governors issue so-called mandates requiring municipal and state employers, as well as private employers and public accommodations, to require their employees and patrons to be vaccinated against COVID-19, they are being challenged by arguments based on personal privacy and bodily integrity.

The former argues that personal medical decisions are protected by the right to privacy, which is a natural right that supersedes governmental needs. The latter argues that since we each own our bodies, we can decide what goes into them. Both the personal privacy and the bodily integrity arguments recognize that the government can only trump fundamental rights if it can prove fault at a jury trial.

Thus, a case where an infected and contagious person is intentionally infecting healthy folks can and should result in an arrest and prosecution for aggravated assault at which the state would need to prove its case. If it did, the convicted defendant would be incarcerated and isolated for the duration of her sentence. But that does not animate the government today.

Today, the government — local, state and federal — is attempting to compel healthy people to be vaccinated against their wills. All three levels of government are attempting to do this by command, not by legislation.

The favorite U.S. Supreme Court case that the pro-mandate folks cite is the 116-year-old Jacobson v. Massachusetts. There, in the era before the court recognized personal privacy or bodily integrity as constitutionally protected, it upheld a Massachusetts statute requiring inoculation for smallpox.