Shhhhh…Just Let the Democrats Schiff Themselves, by Kurt Schlichter

The Democrats are shooting themselves in both feet and only someone with oatmeal for brains wouldn’t hope that they bleed themselves to death. From Kurt Schlichter at theburningplatform.com:

Military guys – and I am a graduate of the Army War College, which is not the one with noted expert on expertise Tom Nichols – try to abide by the apocryphal advice of Napoleon, who counseled that you should never interrupt your enemy while he is making a mistake. But this doesn’t apply to the Democrats because they are not only too dumb to listen to your warnings but their weird dogma actually makes it impossible for them to imagine that they are heading for disaster in 2020. So, I’m going to mock these losers mercilessly, safe in the knowledge that even though I am telling that anime lollipop-looking twerp Adam Schiff and Jerry the Oompa Loompa Nadler exactly what is going to happen, they are powerless to stop it.

Nancy Pelosi, who is no dummy, knows. She gets it. That’s why she’s not taking questions on her solemn, sad impeachment thing. She gets that she’s trapped by the Commie Caucus’s resolute determination to please their blue enclaves at the expense of alienating everyone else. So she’s trying to make it fade away. Yeah, hold onto that impeachment for a while. It’ll get better with age, just like Jennifer Rubin has.

Nancy and Adam are okay with reporting out the indictment known as the impeachment, but they may not be okay with sending it to the Senate, where it will have to be tried. From James Howard Kunstler at kunstler.com:

The WashPo staffers had barely finished toasting “merry impeachmas” — and then quickly deleting the incriminating tweet + photo that signaled their self-owned chagrin — when the implications of the day’s solemn work started sifting through those quarters of the alt-news media where the chronically self-owned don’t dare to go, or even look: Nancy Pelosi and her too-clever-by-half Lawfare grunts had engineered a Hanging Chad Impeachment.

Apparently, Mrs. Pelosi wants to play Hide the Salami with the impeachment bill. She invoked some slippery procedure to stash it where the sun don’t shine in the hope that the senate won’t be able to follow through with its duty to try the very charges set out in the bill. How’s that gonna go over when the details are actually sorted out?

END_OF_DOCUMENT_TOKEN_TO_BE_REPLACED

Only The Damage To America Is Real, by Raúl Ilargi Meijer

After conducting a completely unfair and one-sided impeachment proceeding, Nancy Pelosi and Adam Schiff are demanding that the Senate impeachment trial be “fair” and “bipartisan.” Fat chance. From Raúl Ilargi Meijer at theautomaticearth.com:

Lots of news outlets labeled yesterday’s House vote to impeach President Trump “historic”. It was. But what was historic about it was not that Donald Trump became the third president to be impeached. What was historic was the way it was done. That was a first.

Because it was not the House that impeached President Donald Trump, it was the Democratic Party. Which just happened to have the majority in the House. They appear to think that this is all that’s needed, which is a big mistake and an even bigger gamble. A gamble on the value and future of the US Constitution and the entire political system.

END_OF_DOCUMENT_TOKEN_TO_BE_REPLACED

Enjoy. From President Trump via zerohedge.com:

In a six-page letter to Speaker Pelosi, President Trump rages against The Democrats’ “attempted coup,” blasting that “there was more due process at The Salem Witch Trials.”

“This is nothing more than an illegal, partisan attempted coup that will, based on recent sentiment, badly fail at the voting both. You are not just after me, as President, you are after the entire Republican Party,” Trump wrote.

“History will judge you harshly as you proceed with this impeachment charade.”

“I have no doubt the American people will hold you and the Democrats fully responsible in the upcoming 2020 election. They will not soon forgive your perversion of justice and abuse of power,” he added.

The letter comes on the eve of the House vote on two articles of impeachment against Trump for alleged abuse of power and obstruction of Congress, which is widely expected to approve the articles along party lines. 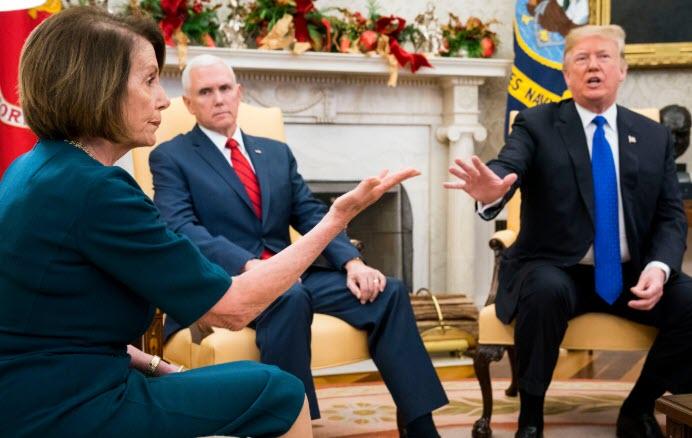 END_OF_DOCUMENT_TOKEN_TO_BE_REPLACED

Devin Nunes has released an epic takedown of Adam Schiff. Ouch! From Tyler Durden at zerohedge.com:

“As part of your rehabilitation, it’s crucial that you admit you have a problem – you are hijacking the Intelligence Committee for political purposes while excusing and covering up intelligence agency abuses.” -Devin Nunes to Adam Schiff

Rep. Devin Nunes (R-CA) has written perhaps the most brutal ‘I told ya so’ letter in recent memory to Adam Schiff, his Democratic rival and chairman of the House Intelligence Committee.

After last week’s Inspector General report on FBI FISA abuse revealed Schiff was peddling lies to the American public in a February, 2018 ‘counter-memo’ to Nunes’s now-proven claims, Schiff passed the buck – telling Fox News host Chris Wallace on Sunday that he was ‘unaware’ of certain things unccovered by the IG – while failing to admit he’s been dead wrong on an ongoing basis about a number of things.

Nunes isn’t letting this go. In a Sunday letter, he reminded Schiff that “The IG’s findings of pervasive, major abuses by the FBI dramatically contradict the assertions of your memo released on February 24, 2018, in which you claimed, “FBI and DOJ officials did not ‘abuse’ the Foreign Intelligence Surveillance Act (FISA) process, omit material information, or subvert this vital tool to spy on the Trump Campaign.“

Schiff is in clear “need of rehabilitiation,” continues Nunes, adding “I hope this letter will serve as the first step in that vital process.”

The Inspector General’s Report on 2016 FBI Spying Reveals a Scandal of Historic Magnitude: Not Only for the FBI but Also the U.S. Media, by Glenn Greenwald

Inspector General Horowitz clearly reveals FBI malfeasance and criminality. What it doesn’t reveal is how supportive the mainstream media was of the FBI, acting as its virtual mouthpiece. It’s credibility has been shredded. How can anyone pay attention to these clowns anymore? From Glenn Greenwald at theintercept.com:

JUST AS WAS TRUE when the Mueller investigation closed without a single American being charged with criminally conspiring with Russia over the 2016 election, Wednesday’s issuance of the long-waited report from the Department of Justice’s Inspector General reveals that years of major claims and narratives from the U.S. media were utter frauds.

Before evaluating the media component of this scandal, the FBI’s gross abuse of its power – its serial deceit – is so grave and manifest that it requires little effort to demonstrate it. In sum, the IG Report documents multiple instances in which the FBI – in order to convince a FISA court to allow it spy on former Trump campaign operative Carter Page during the 2016 election – manipulated documents, concealed crucial exonerating evidence, and touted what it knew were unreliable if not outright false claims.

END_OF_DOCUMENT_TOKEN_TO_BE_REPLACED

Adam Schiff has complete contempt for constitutional protections of individual rights. From John Solomon at wsj.com:

The Federal Bureau of Investigation’s Domestic Investigations and Operations Guide, the bible for agents, has long recognized that journalists, the clergy and lawyers deserve special protections because of the constitutional implications of investigating their work. Penitents who confess to a priest, sources who provide confidential information to a reporter, and clients who seek advice from counsel are assumed to be protected by a high bar of privacy, which must be weighed against the state’s interests in investigating matters or subpoenaing records. Judges and members of Congress also fall into a special FBI category because of the Constitution’s separation of powers.

The FBI and Justice Department have therefore created specific rules governing agents’ actions involving special-circumstances professionals, which include high-level approval and review. There are also special rules for subpoenaing journalists.