Tanking to War, by Brian Cloughley

The best foreign policy maxim for time and all eternity came from Theodore Roosevelt, not one of SLL’s favorite presidents: “Speak softly and carry a big stick.” It’s a lesson most boys learn in the schoolyard, and once learned, it should never be forgotten. Unfortunately, the maxim has no place in the Biden administration. From Brian Cloughley at strategic-culture.org:

We can only hope that President Biden will ignore the war fanatics and agree that negotiation is preferable to confrontation.

One of the recent political absurdities in Europe was a stage-managed photo sequence of Britain’s foreign minister Liz Truss posing boldly but comfortably with her head and shoulders poking out of the turret of a British army tank. The pathetic charade took place in Estonia, close to Russia, when she visited British troops deployed there as part of the U.S.-Nato buildup along Russia’s western frontier. She was on her way to attend a meeting of foreign ministers of the U.S.-Nato military alliance held on November 30 in Riga, the capital of Latvia, some 300 kilometres from Russia.

According to Nato, this is where it “has enhanced its forward presence in the eastern part of the Alliance, with four multinational battalion-size battlegroups in Estonia, Latvia, Lithuania and Poland, on a rotational basis.” The meeting of foreign ministers was chaired by publicity-hungry Secretary General of the Nato alliance, Jens Stoltenberg, who issued the usual challenge to Russia that “we stand together to defend and protect all Allies” — meaning, specifically, Ukraine, concerning which the U.S.-Nato military alliance will “maintain our political and practical support for our partner.” This includes confrontation in the air, under Nato orders whereby “allies take turns deploying to air bases at Šiauliai, Lithuania and Ämari, Estonia, on a four-month rotational basis, ready to be launched by NATO’s Combined Air Operations Centre Uedem, Germany if required.”

Threatening wars and the steady drumbeat of propaganda increases military budgets and keeps the Deep State and its contractors happy. From Patrick Lawrence at consortiumnews.com:

Talk of Washington going to war in behalf of either Taiwan or Ukraine is hard to match for cynicism. 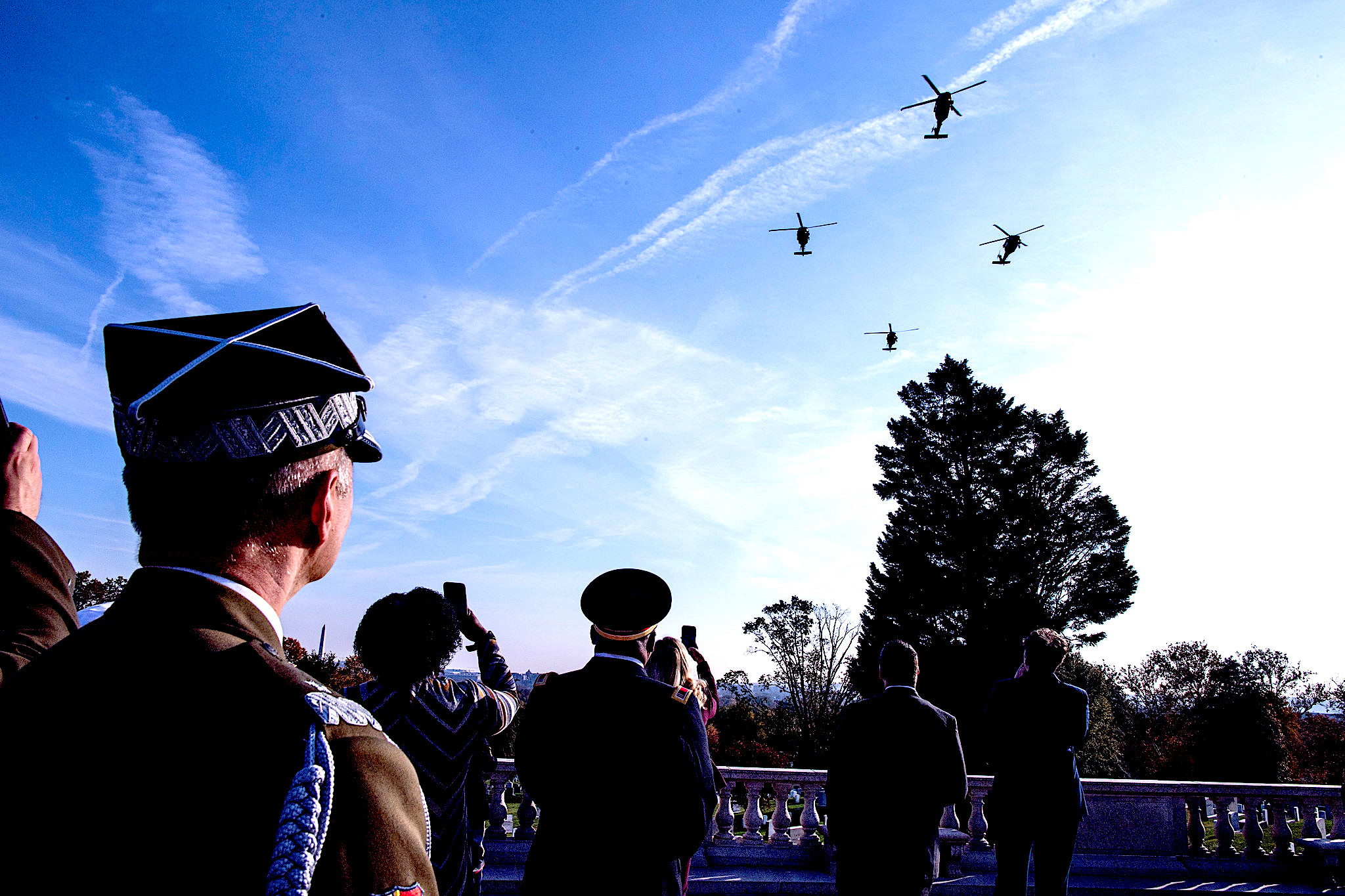 Black Hawk helicopters in fly-by during centennial of the Tomb of the Unknown Soldier in Arlington National Cemetery, Nov. 11. (DoD, Jack Sanders)

Can you hear the drums of war rolling? They beat across both oceans now, rum-rum-rum-pa-rum-rum. And there alongside them are the fifers, sounding as if they have just arrived from the fields of Lexington and Concord. Onward in the name of… in the name of empire, the unliberty of others.

At last, something is clear about President Joe Biden’s amateurishly incoherent foreign policy. In the course of this autumn the regime has settled on two theaters in which taxpayers, frightened-of-the-world Americans, are encouraged to think the republic’s bravest will go to war. The U.S. will wage war in behalf of Ukraine and war in behalf of Taiwan. Supposedly.

Let us be clear off the top about what exactly is clear.

One, people who are smart about winning and losing, if not about much else, know very well that the U.S. could not possibly win a war in either case. Corollary: They also know that body bags arriving in Delaware or California from Eastern Ukraine or Taiwan’s China-facing beaches risk igniting a real, live, true-blue antiwar movement. People would wake up, and they can’t have that.

Two and more saliently, the danger of war is all the administration, the armed forces, the defense contractors, and all the hawks in the media and on Capitol Hill want and need. It is their tried-and-true organizing principle. They are doing very well organizing American minds on danger alone. But going to war with Russia or China would be counterproductive because in all likelihood it would not last long. Then what? The risk of peace? The danger of war is a hardy perennial.

U.S. Supremacy by Any Other Name, by Alastair Crooke

The Biden administration is repackaging standard U.S. foreign policy. The box is different but the contents are the same. From Alastair Crooke at strategic-culture.org:

The world balance has changed qualitatively, and not just quantitatively, Alastair Crooke writes.

Speaking at the Aspen Security Forum two weeks ago, General Milley conceded that ‘America’s century’ is over – a long overdue acknowledgement, most might venture. Yet, belated or not, his saying it nonetheless seemed to signal an important strategic shift: “We’re entering into a tri-polar – world with the U.S., Russia and China being all great powers. [And] just by introducing three versus two you get increased complexity”, Milley said.

More recently, in a CNN interview Jake Sullivan, Biden’s Security Adviser, said that it had been a mistake to try to change China: “America is not seeking to ‘contain’ China: it’s not a new Cold War”. Mr. Sullivan’s remarks come a week after President Biden said the U.S. was not seeking “physical conflict” with China, despite rising tensions – “this is competition”, Biden said.

This indeed seemed to signal something important. But is it, though? This use of the word ‘competition’ is a tad curious as terminology, and requires a little unpacking.

CNN interviewer, Fareed Zakaria, asked Sullivan: So what is it, after all your ‘tough talk’, that you have been able to agree with China; what has been negotiated? One might imagine a response outlining how best Biden thinks to manage these competing interests in a complex tri-polar world. Well, that wasn’t Sullivan’s retort. “Wrong metric”, he said flatly: Don’t ask about bilateral agreements – ask about what else we have secured.

The New American Leadership: Biden Tells the World What He Wants It to Know, by Philip Giraldi

Joe Biden’s foreign policy rhetoric still paints the US as the indispensable nation, with the world’s preeminent military and economy. The problem is that it no longer has either and much of the world is interested in a multi-polar order and is  moving past the American empire. From Philip Giraldi at strategic-culture.org:

The myth of America trudges on with some new labels attached but otherwise pretty much the same, Philip Giraldi writes.

It is sometimes difficult to absorb how much the United States has changed in the past twenty years, and not for the better. When I was in grade school in the 1950s there was a favorite somewhat simplistic saying much employed by teachers to illustrate the success of the American way of life that prevailed at that time. It went “What’s good for General Motors is good for America” and it meant that the U.S. version of a robust and assertive capitalist economy generated opportunity and prosperity for the entire nation. Today, having witnessed the devastation and offshoring of the domestic manufacturing economy by those very same corporate managers, such an expression would be rightly sneered at and considered risible.

Currently the politically motivated expressions of national greatness tend to honor America’s quality rather than the jobs and prosperity that it is able to generate. Presidents speak of the country’s “Exceptionalism,” as well as it being a “force for good” and “leader of the free world” with all that implies. That Americans are now in fact both poorer and less safe has generated its own national myth, that of a country beleaguered by terrorists who despise “our freedom” and which has been stabbed in the back by others, mostly in Asia, who have been engaging in unfair practices to bring America down. President Joe Biden’s gang of apologists has as well been fixated on the positive assertions that “America is back” and that the president will “build back better,” surely meaningless expressions that reflect the vacuity of the Democratic Party pre-electoral hype that Donald Trump had led the country to perdition.

President Joe Biden’s United Nations address three weeks ago was indeed largely Trump without all the bluster, threats and admonishments. He lied to the world leaders that: “I stand here today, for the first time in 20 years, with the United States not at war.” According to the latest available information, the U.S. was involved in seven wars in 2018: Afghanistan, Iraq, Syria, Yemen, Somalia, Libya, and Niger. Now that Afghanistan is nominally over, the number of current American wars is six officially, though none of them are actually declared by Congress as demanded the Constitution. If one includes clandestine counter-terrorism operations the real number is certainly much higher.

The Aimless Empire, by Patrick Lawrence

Perhaps the most trenchant and damning indictment of the Biden administration foreign policy is it doesn’t really have one. From Patrick Lawrence at consortiumnews.com:

Under Biden, the world’s most powerful, most heavily armed, most determinedly righteous nation shows little sign of having any foreign policy at all.

Bitter and frightening realities face us four months into Joe Biden’s presidency. On the domestic side it is a Potemkin village, behind the façades of which lies a slum of unfulfilled promises that are no longer even part of the Washington discourse. That is the bitter part.

I do not traffic in hyperbole, favored as this is among our poseur  pundits, mostly liberals and “progressives,” who are little Potemkin villages all by themselves. It is simply time to state the obvious but unsayable, to run our palms over the rough skin of the elephant in our living room. The American empire no longer knows what to do in the world. It is lost in the 21stcentury forest, ever more alone.

Something else must be said immediately. Fearful as it is to contemplate a nuclear power wandering the globe without aim, at the horizon the Biden regime’s incoherent non-policies are a positive sign of history’s movement in the right direction. Imperial decline, after all, is to be hoped for.