Those on top don’t always stay on top.

Who can argue with prevailing business practices? If corporate-debt-supported stock options, wiping out competitors via regulation rather than honest competition, buying bureaucrats and politicians, endorsing the reigning ideology, and political pull are the road to riches, how can you fault the executives for taking it?

For what is a man profited, if he shall gain the whole world, and lose his own soul? or what shall a man give in exchange for his soul?

The executives have sold their souls and have no interest in the hard road to redemption. They’re in varying degrees of alignment with the global governance cabal for which Covid and climate change are the Trojan horses. There are the marquee names—Gates, Bezos, Dimon, Zuckerberg, Soros, Schmidt, Thiel, Musk—paid up members of the Davos cabal and irretrievably evil. Then there are the vast majority of executives, mere go-along-to-get-along pawns. Any arguments to them have to be phrased in terms of their mushy philosophy—if you can call it that—unprincipled pragmatism.

The best pragmatic argument—because it appeals to fear, an emotion stronger than greed or power lust—is Jack Ma. The people who run governments are a fickle bunch, unmoored to any concept of honor. One day you’re one of the richest men (people with things hanging down between their legs) in China, the esteemed builder of multinational technology conglomerate Alibaba, and a Communist party stalwart. The next day you’ve been “disappeared” and your company has been pulled off its pedestal by jealous functionaries. You only reappear after long reeducation and quiet contemplation of the gospel according to a totalitarian collectivist (Xi Jinping, On the Party’s Propaganda and Ideological Work, Beijing: Institute of Party History and Documentation of the Central Committee of the Communist Party of China, 2020, for those yearning to peruse classic communist claptrap).

If you’re a run-of-the-mill executive back in the USSA, the government in whose totalitarianism you are an accomplice may one day nationalize your company under some emergency power it’s granted itself. Don’t be surprised if your friends in government no longer take your calls. You may find yourself out of a job and stripped of your stock options. You may find yourself Jack Ma’ed for reeducation, or “disappeared” for good. Expect no sympathy or defense of your rights from your victims. Even if you’re a big-cheese member of the global cabal, bigger cheese can turn on you in an instant.

So too can financial markets and an economy built on a porous foundation of debt (ask the comrades at Evergrande). Those in-the-money stock options at Dow 35,000 will be worthless at Dow 5,000. The corporate debt that supported the stock price weighs so much heavier in a depression. Not every company can be too big to fail; not every debt-laden zombie can be saved; not every executive has enough friends in Washington.

The central bank and the Treasury swapping their fiat debt instruments—the modern version of currency debasement—isn’t an economic strategy. It’s holding a hand over your head on a cloudy day and hoping it will stop the coming rain. It won’t save the day.

Slogans aren’t a business strategy. Sustainability, diversity, equity, inclusion, green, safety, build back better, and all the other approved words and phrases are no substitute for sales, revenues, and profits—dark words from the dark past. Speaking of dark, this winter millions of people are in danger of power outages when the sun doesn’t shine and the wind doesn’t blow, with the fossil fuel power plants that might have served as renewable energy backups decommissioned. By way of analogy, there’s no financial warmth for companies whose corporate PR drips green but whose bottom line drips red.

END_OF_DOCUMENT_TOKEN_TO_BE_REPLACED

There are some in the alternative media who say that the Western mainstream media is dominated by Western governments, but are skeptical of claims that the Chinese government has a massive media influence operation. Influencing the media is what governments do. From Eva Fu at The Epoch Times via zerohedge.com:

The Chinese regime has been deploying “covert, corrupt and coercive” means to weaponize Chinese-language and Western media in a campaign to impose its vision of current affairs on the rest of the world, a recent French military think tank report finds. 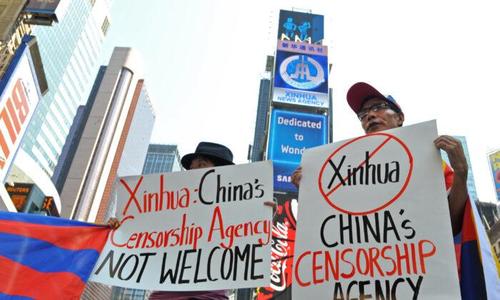 Beijing’s efforts to export its narratives have lasted for decades. The first Chinese Communist Party-controlled English language newspaper, China Daily, started in 1981. But such attempts had been clumsy and yielded slow results, according to Reporters Without Borders.

The year 2008 marked a turning point. The Olympic Games in Beijing, an event the regime had hoped to leverage to showcase its economic success, gave rise to protests in nearly a dozen cities around the world that disrupted torch relays.

The humiliation Beijing suffered from the resulting negative coverage had stung the authorities. To better control the regime’s global image, the Chinese Communist Party (CCP) soon came up with a “10-year plan,” noted the report by the Institute for Strategic Studies of Military Schools (IRSEM), a think tank funded by the Ministry of the Armed Forces. 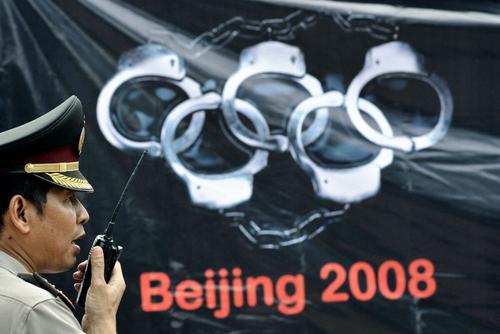 A police officer communicates over his radio standing beside an anti-Chinese banner during a demonstration by pro-Tibet activists and supporters near venue of the Indonesia’s leg of 2008 Beijing Olympic torch relay in Jakarta on April 22, 2008. (Jewel Samad/AFP via Getty Images)