It’s not an exaggeration to say that America’s fate may hinge on what happens to that laptop. From Peter van Buren at theamericanconservative.com: MILWAUKEE, WI – AUGUST 20: In this screenshot from the DNCC’s livestream of the 2020 Democratic National Convention, Hunter Biden, son of Democratic presidential nominee Joe Biden, addresses the virtual convention on August 20, 2020. The convention, which was once expected to draw 50,000 people to Milwaukee, Wisconsin, is now taking place virtually due to the coronavirus pandemic. (Photo by DNCC via Getty Images) (Photo by Handout/DNCC via Getty Images)

Actually, the FBI agreed first, as they are in the middle of a criminal investigation into Hunter’s business activities and taxes based on the contents of the laptop. Despite the ongoing coverage of the emails outside establishment media, it was only the FBI’s investigation of the laptop that finally forced the Times to admit this year that what it said last year was bull. Politico, based on a book by one of its own writers, now, too, admits the emails are real, and not Russian disinformation as they claimed previously.

Now that we can talk about the emails in polite company, what’s the big deal? Is this just another case of buh, buh her emails?

Propaganda everywhere—Ukraine, Hunter Biden’s laptop, men claiming to be women, Covid—the list goes on and on. From Vasko Kohlmayer at lewrockwell.com:

It is truly astounding to watch so many good, well-meaning people fall for the media’s Ukraine narrative.

“Putin is a madman, a butcher and a war criminal who has irrationally invaded a peaceful neighbour that was just minding its own business” runs the storyline that is being pounded into our heads twenty-four hours a day.

Even though Vladimir Putin may not be the nicest man in the world, none of the presently peddled Ukraine narrative is true. In fact, the truth is the opposite of what is being said.

Simply put, the Ukraine narrative bears all the hallmarks of another coordinated misinformation campaign. Those who are falling for it need to ask themselves why they should trust anything put out by our thoroughly corrupt corporate media given their consistent record of lying, distortion, and all-around treachery.

The evidence of the last several years makes it clear beyond any doubt that the American media are nothing but agents of fake news and misinformation.

450GB Of ‘Deleted’ Hunter Biden Laptop Material To Be Released Within Weeks, by Tyler Durden

This should land Hunter in the slammer and be the beginning of the end of Biden’s presidency. From Tyler Durden at zerohedge.com:

A whistleblower who’s fled the United States for Switzerland has vowed to drop ‘450 gigabytes of deleted material‘ from Hunter Biden’s abandoned laptop, which he says he also gave the the Washington Post, New York Times, and Sen. Chuck Grassley – all of whom he says sat on it for months. 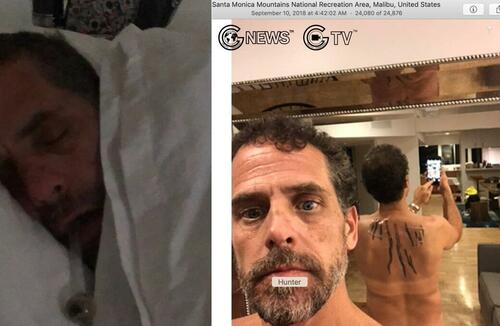 For the past two weeks, former Steve Bannon War Room co-host Jack Maxey has been hiding in Zurich, where he told the Daily Mail he’s been working with IT experts to dig more data from Hunter’s ‘laptop from hell,’ and that he’ll post it all online in a searchable database in the coming weeks.

“I came here so that we could do a forensic examination of Hunter’s laptop safely in a country that still respects human liberty and the ideals of liberal democratic principles,” he told the Mail. “I do not believe this would have been possible inside the United States. We had numerous attempts on us from trying to do things like this there.”

A comprehensive report about the ongoing federal probe into Hunter Biden’s tax filings published by the New York Times on Wednesday night confirmed the existence of the first son’s infamous laptop.

In October 2020, The Post exclusively reported on the contents of Hunter Biden’s laptop that he ditched at a Delaware repair shop in April 2019.

The laptop’s hard drive contained a trove of emails, text messages, photos and financial documents between Hunter Biden, his family and business associates — detailing how the president’s son used his political leverage in his overseas business dealings.

The repair shop owner reported the laptop to the FBI, which seized the device and its hard drive.

As part of their investigation into Hunter Biden, the Times reports, federal prosecutors have looked into emails between the first son and his former business associates that were recovered from the laptop.

In this age of confusion and doubts about the veracity of almost everything, there is one pretty reliable indication that something is the truth—the mainstream media and Big Tech call it disinformation. From Glenn Greenwald at greenwald.substack.com:

The media outlets which spread this lie from ex-CIA officials never retracted their pre-election falsehoods, ones used by Big Tech to censor reporting on the front-runner.

One of the most successful disinformation campaigns in modern American electoral history occurred in the weeks prior to the 2020 presidential election. On October 14, 2020 — less than three weeks before Americans were set to vote — the nation’s oldest newspaper, The New York Post, began publishing a series of reports about the business dealings of the Democratic frontrunner Joe Biden and his son, Hunter, in countries in which Biden, as Vice President, wielded considerable influence (including Ukraine and China) and would again if elected president.

The backlash against this reporting was immediate and intense, leading to suppression of the story by U.S. corporate media outlets and censorship of the story by leading Silicon Valley monopolies. The disinformation campaign against this reporting was led by the CIA’s all-but-official spokesperson Natasha Bertrand (then of Politico, now with CNN), whose article on October 19 appeared under this headline: “Hunter Biden story is Russian disinfo, dozens of former intel officials say.”