Wells Fargo paid more in criminal penalties than it paid in interest to its depositors, by Simon Black

Wells Fargo is catching up to HSBC and Deutsche Bank as a dirty bank. From Simon Black at sovereignman.com:

Last week Wells Fargo paid the largest fine yet for one of it’s many scandals– $3 billion.

This time, the fine was for opening bank accounts under customers’ names without the customers’ knowledge or consent.

Workers at Wells Fargo did this to boost their own sales goals. They forged customers’ signatures, falsified records, and engaged in outright fraud.

This internal identity theft ended up costing customers millions of dollars in unnecessary fees and overdraft charges. And it went on for fourteen years.

This was no accident, one-off, or a case of a few bad apples. In fact, this wasn’t even close to the only scandal Wells Fargo has been fined for over the past few years.

A computer glitch once caused over 500 Wells Fargo customers to have their houses foreclosed on.

END_OF_DOCUMENT_TOKEN_TO_BE_REPLACED

US Budget Deficit Hits A Record $234 Billion As Interest On Debt Soars, by Tyler Durden

February set a new all time record for a monthly budget deficit, $234 billion. The record will probably not stand for long. From Tyler Durden at zerohedge.com:

Another month, another frightening jump in the US budget deficit. And this time it was a record.

According to the latest Treasury data, the US budget surplus in February – traditionally the worst month of the year due to tax refunds – was a whopping $234 billion, missing the $227 billion deficit expected, and well worse than the $214 billion deficit recorded last February. And even though there may have been one-time tax refund and government shutdown factors at play, the February deficit was also the biggest budget deficit on record. 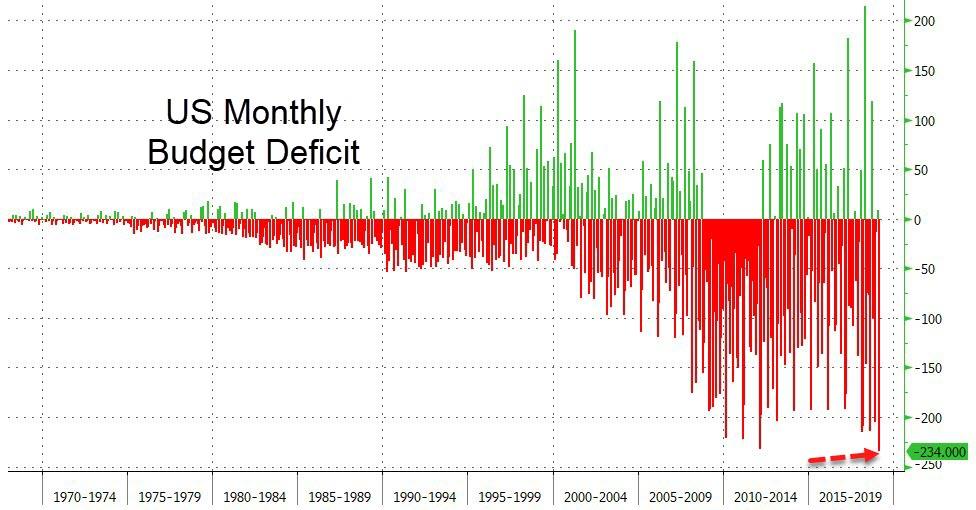 For March, receipts rose 7.5% y/y to $167.3BN while outlays rose 8.2% to $401.2BN in Feb. As a result, the budget deficit for the first five months of the fiscal year, widened to $544 billion, a whopping 39% higher than the $391 billion reported for the same period last year, largely the result of the revenue hit from Trump’s tax cuts and the increase in government spending. The deficit was the result of a modest drop in fiscal YTD receipts to $1.278 trillion, while spending jumped 9% to $1.823 trillion.

The National Debt Is Coming Due, Just Like We Told You, by Nick Gillespie

The national debt is entering the critical phase, also known as the beyond the point of no return. From Nick Gillespie at reason.com:

What happens when you borrow the equivalent of your annual income and those low, low teaser rates start to increase? Congratulations, America, you’re about to find out.

A quick recap of our dismal national fiances: The U.S. economy generates about $21 trillion in annual activity. Debt owed to the public comes to about $15.5 trillion, but when you add intra-governmental debt (which you should, because it represents actual commitments to pay), the figure is…about $21 trillion.

END_OF_DOCUMENT_TOKEN_TO_BE_REPLACED

U.S. on a Course to Spend More on Debt Than Defense, by Kate Davidson and Daniel Kruger

There’s no stopping compounding interest, and the US government is on the wrong side, the paying side, of it. From Kate Davidson and Daniel Kruger at wsj.com:

In the past decade, U.S. debt held by the public has risen to $15.9 trillion from $5.1 trillion, but financing all of that debt hasn’t been a problem. Low inflation and strong global demand for safe U.S. Treasury bonds held the government’s interest costs down.

That’s in the process of changing.

Interest rates are rising as inflation normalizes around the Federal Reserve’s 2% target. That and the sheer scale of debt being accumulated by the federal government has put the U.S. on a path of rising interest costs that in the years to come could crowd out other government spending priorities and rattle markets.

END_OF_DOCUMENT_TOKEN_TO_BE_REPLACED

Federal Deficits Are Worse than You Think, by Mark Brandly

Here’s a surprise. The federal government and its media henchpeople tend to put the deficit in its absolute best light. From Mark Brandly at mises.org:

Voters tend to be rationally ignorant. Since a single vote does not matter, for most potential voters the cost of being politically well-informed is greater than the benefit of being knowledgeable about political affairs. Therefore it’s rational for most voters to be ignorant regarding political issues.

A main reason for the high cost of being well-informed is that government officials may not want the public to be well-informed. They purposefully conceal their schemes to reduce the opposition to their policies. A well-informed body politic would be a threat to the welfare and warfare state.

This obscurantism is on full display regarding the government budget.

Let’s start with the annual deficit. You may have noticed that the stated annual deficit is less than the increase in government debt. In order to explain this, consider a small scale example. Assume that you were $20,000 in debt at the beginning of 2017 and you earned $3,000 and spent $4,000 during the year. You borrowed $1,000 to cover this spending so your total debt increased to $21,000. A sensible reading of this situation would be that you had a $1,000 deficit in 2017 (multiply these numbers by a billion dollars to roughly approximate what is generally asserted to be the federal budget).

However, if you followed the federal government’s method, you would claim a deficit of, say, $600. According to the feds, the official deficit is less than the increase in total debt. How do they do this? Well, some of the borrowed money is simply not included in the deficit. For example, in fiscal year 2016, they claimed a deficit of $587 billion even though the total debt increased $1,422 billion and the debt held by the public (the total debt less the intragovernmental debt) increased $1,049 billion. They hide some of the deficit by simply declaring that some of the increased debt is not part of the deficit.

But this deception is of little consequence compared to the government’s claims about their spending habits.

According to the “Economic Report of the President,” government spending (outlays) over the twenty year period from Fiscal Year 1998 to FY 2017 more than doubled from $1,652.5 billion to $3,981.6 billion. In real terms, using the implicit price deflator as our measure of inflation, this was a 67% increase in spending.

To continue reading: Federal Deficits Are Worse than You Think