Local government foils evil terrorist entrepreneurs once and for all, by Simon Black 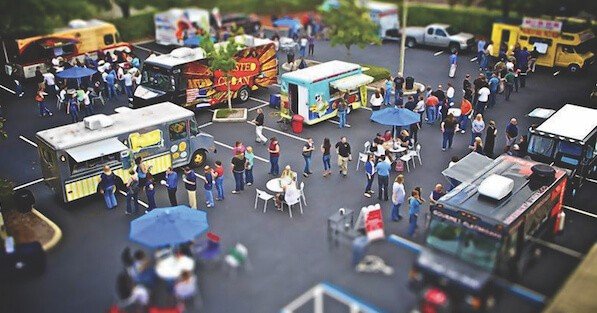 Food trucks and renting out your own home or apartment threaten the American way of life, but fortunately local governments are on the case. From Simon Black at sovereignman.com:

Tens of thousands of years ago, humankind was practically an endangered species.

Our early proto-ancestors had little means to protect against the harsh elements or defend against terrifying predators.

And finding enough food was a constant challenge.

Tribes of humans would roam from place to place, foraging for whatever they could eat until they had exhausted nature’s resources… and then be forced to move on to a new location.

And the idea that early humans were champion hunters is largely myth; we were scavengers for the most part, nibbling scraps off dead animal carcasses that had already been picked clean by predators higher up the food chain.

It was hardly a sustainable way to live.

Then everything changed around 10,000 years ago.

Our ancestors discovered that they could plant seeds in the ground and grow their own food. LOTS of food– far more than they could eat.

And that excess food could be invested– to support the labor of other members of the tribe to develop better tools and build structures… or to trade with other tribes for their surplus foods.

It was the first time ever that human beings enjoyed a regular surplus, where they could consistently produce more than they consumed.

I call this the Universal Law of Prosperity: consistently producing more than you consume.

And if our early ancestors had not discovered this simple principle, we would likely all still be squatting in the wilderness.

And it’s easy to understand: if you spend more than you earn, sooner or later you’re going to run into serious trouble.

We talk about this a lot in our regular conversations– there are so many violations of this principle everywhere you look.

Some of the most popular companies in the world these days burn through cash, consistently spending far more than they earn.

Governments are in debt up to their eyeballs, blowing trillions of dollars on programs they cannot afford.

And too many individuals are living way beyond their means, consuming far more than they produce.

In most of the West– and ESPECIALLY in the Land of the Free– the entire system is designed for consumption.

Think about it: the United States is easily one of the best places in the world to be a consumer.

US consumers can buy almost anything they want. They have access to the finest brands, the best restaurants, the largest malls and markets.

They can order anything online and get same day delivery. Soon drones will float down from the heavens to deliver boxes straight to their doorsteps.

And there is no shortage of banks and finance companies willing to step up and offer US consumers endless quantities of debt.

After all, why bother saving up for anything when you can indulge now and push off the consequences into the future?

Yes, the United States has consumption down to a science. And sadly this has become the most critical component of the US economy.

Economists fret over how much consumers spend during the holiday season; as they say, ‘the US consumer drives the economy.’

That’s probably because governments make it harder and harder to be productive.

One ridiculous example is Louisville, Kentucky– where hardworking entrepreneurs are being punished for the egregious crime of selling food to hungry people.

A few years ago Louisville’s local government tried to ban them altogether, but lost in a lawsuit.

And they would only be allowed to operate during daylight hours… forced to shutter when the sun goes down like some bizarre zombie apocalypse.

I can just imagine what nefarious entrepreneurial terrorist plot these do-good bureaucrats think they’re foiling with such heavy regulations.

And I’m sure the fine citizens of Louisville will sleep easier knowing that the sweet sound of the Ice Cream Man will fall silent at sundown.

Well it’s about damn time these vile criminals were brought to justice.

Imagine the nerve of some owners who actually felt entitled to rent out their own private properties to supplement their incomes in one of the most expensive cities in the world while simultaneously providing cost effective lodging options for out-of-town travelers.

I truly hope that world leaders can come together in a new Coalition of the Willing to defeat this evil scourge once and for all.

It’s the same everywhere you look.

Want to start a business? File a bunch of forms, apply for permits, deal with bureaucracy.

As we’ve talked about before, most states in the Land of the Free require absurd and costly licensing requirements for even simple occupations like being a locksmith or house painter.

It’s easy to go into debt. It’s difficult to save.

(Just think– how much does your bank pay in interest? 0.03%? Even if you’re lucky enough to be productive and save money, the return is pitiful.)

All this is literally the opposite of what it takes to create prosperity.

This isn’t rocket science. If everything in the system favors consumption over production, debt over savings, it’s pretty easy to see where that trend eventually leads.

One response to “Local government foils evil terrorist entrepreneurs once and for all, by Simon Black”