How Corporations Are Using Environment Concerns to Scam You, by Dr. Joseph Mercola

Pouncing on investors’ interest in environmentally friendly, sustainable investing, the S&P 500 ESG Index was launched in 2019.1 ESG, or environmental, social and governance, funds are supposed to be those focused on companies with strong environmental ethics and responsibility, but further investigation reveals rampant greenwashing has occurred, and many ESG-labeled funds are far from “sustainable.”

The Securities and Exchange Commission (SEC) has been scrutinizing ESG funds for years, as their popularity soared. While funds focused on socially responsible investing were valued at $2.83 billion in 2015, this grew to $17.67 billion by 2019, when Alex Bernhardt, U.S. head of responsible investments at investment consultant Mercer, told The Wall Street Journal, “In every asset class, in every region, ESG product development is the thing right now.”2

Fast-forward to 2022, and the SEC is cracking down on ESG labels, with multiple investigations launched into ESG greenwashing on Wall Street by multiple mega-banks. Globally, $41 trillion are expected to flow into ESG funds in 2022.3

A Great Bull Market in Inflation Has Just Begun.. And It Has Its Origins in ESG, by Chris MacIntosh

You knock some forms of energy out of the market and the price of the energy that’s left goes up. How about that? From Chris MacIntosh at internationalman.com: 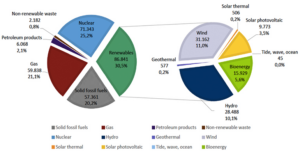 Roughly 30% of the wood-chips came from Russia.

Sanctions have put a halt to this and additional supply cannot be made up by the US and Canada (the other two big wood-chip suppliers to Europe). You probably know where we are heading here… About 2% of Europe’s base load electricity production is gone, putting additional demand on electricity generated by gas, coal and nuclear.

Burning wood is quite literally retarded, but these muppets have decided in their wisdom that wood chips are actually “green”. In any event, they’ve now lost 30% of this wonderful “green, renewable” energy source.

Gas can’t be increased (for obvious reasons) and neither can nuclear (those nuke plants that haven’t been shuttered are operating at full capacity). So that leaves coal, which needs to come from South Africa, the US, Indonesia, or Australia — not that there was much spare capacity from these producers even before the sanctions went on… and that was with Russian thermal coal exports. Oh, what a pickle!

When looking at the components of European energy, it is literally impossible to come away without a view that their energy crisis has no realistic viable solutions on the horizon.

A Global ESG System Is Almost Here: We Should Be Worried, by Jack McPherrin

The WEF wants the world’s business to adopt business plans along the lines of WEF propaganda. From Jack McPherrin at The Epoch Times via zerohedge.com:

ay two of the World Economic Forum’s (WEF) Annual Meeting in Davos, Switzerland, started off on a concerning note.

Some of the chief architects of environmental, social, and governance (ESG) scores met during a session called “Global ESG for Global Resilience,” and have clearly decided to double down on their objective for a new global economic order that transcends national borders and replaces free-market capitalism.

Destroying free-market capitalism in favor of a new “stakeholder” model, in which global elites hold all the power, has been their objective for years. A single ESG system gets them much closer to this goal, and will be significantly more effective at eroding national sovereignty, circumventing democratic processes, coercing companies into compliance, and ultimately restricting individual choice.

Early in the session, Hong Kong Stock Exchange Chairman Laura Cha got right to the point. She revealed, “In order for the [ESG] disclosures to be meaningful, we need to have a harmonized standard. … It would be very good in terms of the work that the ISSB [International Sustainability Standards Board] is doing to bring about some standardized global measures.”

The ISSB is a new standard-setting board developed for the sole purpose of institutionalizing this global framework.

ISSB Chairman Emmanuel Faber confirmed that these efforts have begun: “We just a week ago … we convened the first-ever working group of jurisdictions on sustainability standard alignment …. And there was China, Japan, [the] UK, [the] U.S., and [the] EU. … And that is just the start.”

Diversity or The Bigotry of Low Expectations, by Jayant Bhandari

It’s not enough for people in business to be committed to and actually do the right things. Now, they must trumpet their eternal love of ESG and EDI. Don’t know what those two acronyms mean? Read on. From Jayant Bhandari at acting-man.com:

A financial analyst is often, or at least should be, more of a psychologist than a financial expert. There are companies that I knew fifteen years ago that had inherent value a multiple of what their stocks were trading at. Today, there continues to be similar upside, except that upside targets and share prices are lower. What went wrong?

A problem reaches the far North faster than climate change can melt all the ice. [PT]

Such companies are often value-traps. A financially astute person might invest in them, hoping that eventually, the market will recognize the value. Unfortunately, some managements do not understand the concept of value-creation or are unfocused, innumerate, or crooked. One must learn early that even in the private sector, top leadership positions do not necessarily end up in the hands of the most competent people.

I mostly analyze mining companies. An example of a value-trap is a Hong Kong-listed entity, G-Resources, which was a mining company in the past. Today, it has most of its value is in treasuries and cash, worth US$1,500 million. Its market capitalization (at a HK$0.05 share price) is, however, a mere US$200 million. I don’t see any hope of it ever going up to match its inherent value.

An analyst must screen out the bad apples as quickly as possible. I want to address some areas in which companies actively destroy value.

Many mining companies, whose focus should be geology and mining engineering, spend too much time worrying about the commodity market. The commodity business is a specialization in its own right, and there is a reason why commodities are called “commodities”: It is hard — perhaps impossible — to project their future prices.

When mining companies project a future of scarcity, they show a lack of understanding of economics: About the elasticity of demand and supply and how futures and options markets take care of shortages through a complex web of hedging by suppliers and users. The extent to which a specific  commodity can rise in price is limited, because at some point substitution kicks in.

A typical, but hugely erroneous graph provided by many companies.

Holier than Thou with ESG

Over the last couple of years, many companies have implemented ESG programs. And EDI, a recent advent, has gone into hyper-drive. Of course, only the acronyms are quoted, for every “woke” person should know what they mean. ESG stands for Environment, Social, and Government.