I Called Everyone in Jeffrey Epstein’s Little Black Book, by Leland Nally

This is a long article, but I guarantee you, once you start reading you’ll find it almost impossible to stop. From Leland Nally at motherjones.com:

What I learned about rich people, conspiracy, “genius,” Ghislaine, stand-up comedy, and evil from 2,000 phone calls.

Jeffrey Epstein’s little black book is one of the most cursed documents ever compiled in this miserable, dying country. Totaling 97 pages and containing the names, numbers, and addresses of a considerable cross section of the global elite, Epstein’s personal contact book first turned up in a courtroom in 2009 after his former butler, Alfredo Rodriguez, tried to sell it to lawyers representing Epstein’s victims for $50,000. Rodriguez described the book, apparently assembled by Epstein’s employees, as the “Holy Grail.” It is annotated with cryptic marginalia—stars next to certain entries, arrows pointing toward others–and the names of at least 38 people are circled for reasons that aren’t totally clear. There are 1,571 names in all, with roughly 5,000 phone numbers and thousands of emails and home addresses. There are celebrities, princes and princesses, high-profile scientists, artists from all over the world, all alongside some of the world’s most powerful oligarchs and political leaders—people like Prince Andrew (circled), Ehud Barak (circled), Donald Trump (circled).

Rodriguez was Epstein’s butler at his Palm Beach mansion for many years. He was intimately familiar with his boss’s sexual proclivities. He claimed to have seen nude underage girls at Epstein’s pool, said that he would routinely wipe down and stow away sex toys in Epstein’s room after “massages,” and alleged that he saw child pornography on Epstein’s personal computer. In 2011, Rodriguez was sentenced to 18 months in prison for having tried to sell the book to an undercover agent after failing to notify investigators about its existence. Rodriguez said in court that the book was “insurance” against Epstein, who wanted him to “disappear.” Rodriguez died of mesothelioma shortly after serving his sentence.

SLL doesn’t think Ghislaine Maxwell will be alive at the end of this year. From Jon Hall at fmshooter.com:

Ghislaine Maxwell, a long-time associate and one-time girlfriend of Jeffrey Epstein was arrested by the FBI at the beginning of July. Maxwell has henceforth been accused of being the ringleader of his sex trafficking operations which saw girls as young as 14 into Epstein’s mansion. Recently released documents filed in a 2015 civil lawsuit that Maxwell has been fighting with the courts to keep away from the public eye have unearthed some heavy revelations concerning Ghislaine Maxwell and several other different people.

Firstly, the documents exposed that Ghislaine Maxwell lied when she claimed she hadn’t been in contact with Epstein for “over a decade” prior to his death. In 2015, the e-mail address “GMaxl@ellmax.corn” writes to Epstein, saying:

I would appreciate it if shelley would come out and say she was your g’friend – I think she was from end 99 to 2002.

The next day, Epstein responded to Maxwell from the e-mail address “JeeVacation@Gmail”, telling her “You have done nothing wrong and i woudl (sic) urge you to start acting like it. go outside, head high, not as an esacping (sic) convict. go to parties. deal with it.” Maxwell’s lawyers claimed in a July court filing that she hadn’t been in contact with Epstein for over a decade before his death in 2019. Her lawyers made this claim while arguing in defense of Ghislaine being released on $5 million bond whilst awaiting trial.

Whitney Webb is apparently the only journalist who wants to look at the Epstein-US intelligence-Israeli intelligence-international banking nexus. From Webb at unlimitedhangout.com:

The news of the shooting of the husband and son of Esther Salas, the judge recently assigned to oversee the Jeffrey Epstein – Deutsche Bank case, caused shock and confusion while also bringing renewed scrutiny to the Epstein scandal just a week after Epstein’s main co-conspirator, Ghislaine Maxwell, was denied bail in a separate case.

The case Salas is set to oversee is a class action lawsuit brought by Deutsche Bank investors who allege that Deutsche Bank “failed to properly monitor customers that the Bank itself deemed to be high risk, including, among others, the convicted sex offender Jeffrey Epstein.” The case came after the New York state Department of Financial Services had settled with Deutsche Bank over the bank’s failure to cut ties with Epstein-linked accounts, resulting in Deutsche Bank paying a $150 million fine. Deutsche Bank, unlike other financial institutions, failed to close all of its accounts linked to Epstein until less than a month prior to his arrest last year, even though the bank had identified him as “high risk” yearsbefore.

Beyond the tragedy of Sunday’s shooting, which claimed the life of Salas’ only child, the quick discovery of the death of the main suspect, Roy Den Hollander, of a “self-inflicted” gunshot to the head before he could be arrested or questioned by authorities has led to speculation that there is more to the official narrative of the crime than meets the eye.

The Media’s Deafening Silence on Mike Bloomberg’s Ties to Epstein and Other Criminals, by Whitney Webb

Michael Bloomberg is tied in with a lot of shady characters, including Jeffrey Epstein. From Whitney Webb at mintpressnews.com:

fter his late jump into the Democratic primary and, as critics argue, purchasing his way into the primary debates, former Mayor of New York City Michael Bloomberg has received mixed coverage from corporate media, with many negative critiques of the current presidential contender’s history, conduct and connections.

Yet, despite efforts by other campaigns and more progressive-leaning media outlets to dampen Bloomberg’s chances at the nomination, one clear weakness of Bloomberg’s has thus far evaded meaningful media coverage: his ties to key players in the Epstein scandal, including Leslie Wexner, Ghislaine Maxwell and even Jeffrey Epstein himself.

Silence among outlets that largely oppose Bloomberg’s candidacy regarding his connections to Epstein and those in his close social orbit is odd, especially when reporting on an individual’s connections to the intelligence-linked pedophile are a sure-fire way to generate considerable negative attention and fodder for rival campaigns. This is particularly striking given that the numerous accusations that Bloomberg has long stoked a toxic culture of sexual harassment at his company, resulting in no small number of non-disclosure agreements over the years, have received some media attention. Yet, the fact that many of Bloomberg’s close friends have been accused of far, far worse has received hardly any coverage by comparison.

END_OF_DOCUMENT_TOKEN_TO_BE_REPLACED

Will The Epstein Story Ever be Fully Told? by Bill Rice, Jr.

Most people believe that Epstein’s story will never be uncovered and told. The cynicism is undoubtedly justified. From Bill Rice, Jr. at zerohedge.com:

More than four months after Jeffrey Epstein’s arrest – and three months after his alleged suicide –  it requires no opinion poll to know that few Americans believe the story of the international sex trafficking ring orchestrated by Epstein and his alleged “co-accomplices” will ever be fully told. 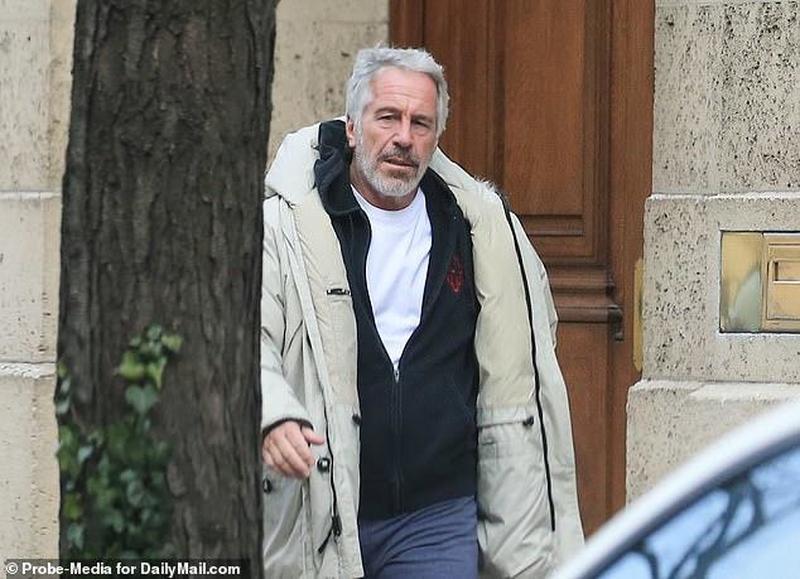 More specifically, many Americans believe that most (if not all) of the key questions regarding the case will remain unanswered. For example …

Barr Ends All Conspiracy Theories Forever By Saying Epstein Died Via A Series Of Coincidences, by Caitlin Johnstone

Never trust an explanation from an instrument of a government that has repeatedly lied, especially when the explanation is dubiously full of holes. From Caitlin Johnstone at medium.com:

In an interview with Associated Press, US Attorney General William Barr put all conspiracy theories to rest once and for all by assuring the world that alleged sex trafficker and alleged billionaire Jeffrey Epstein’s death was simply the result of a very, very, very long series of unfortunate coincidences.

“I can understand people who immediately, whose minds went to sort of the worst-case scenario because it was a perfect storm of screw-ups,” Barr told AP on Thursday.

Redneck Epstein Meme of the Day, from The Burning Platform 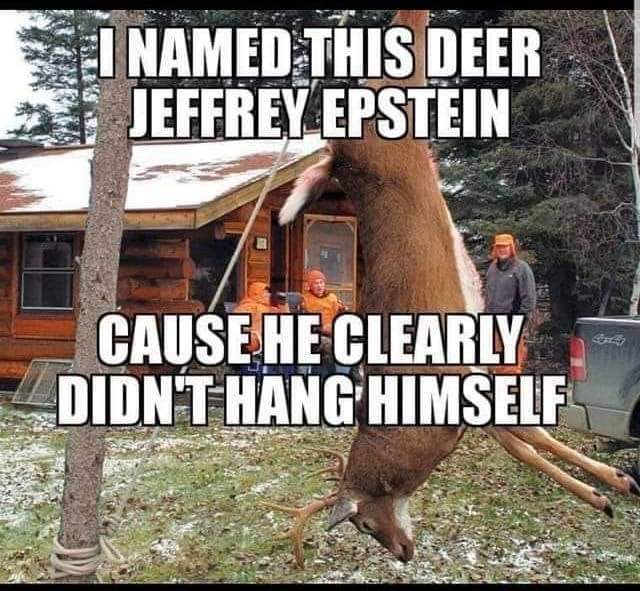 A forensic expert has gone public on Fox News with what anyone with a three-digit IQ already knows: Jeffrey Epstein was murdered. From Tyler Durden at zerohedge.com:

This morning on Fox and Friends, Dr. Michael Baden, a famous forensic expert and former New York City medical examiner said that at the end of the investigation he did on behalf of Jeffrey Epstein’s brother, its findings are more consistent with homicidal strangulation than suicidal hanging.

Dr. Michael Baden, who was hired by Epstein’s brother and observed the autopsy, told Fox News that the 66-year-old Epstein had two fractures on the left and right sides of his larynx, specifically the thyroid cartilage or Adam’s apple, as well as one fracture on the left hyoid bone above the Adam’s apple, Baden told Fox News.

“Those three fractures are extremely unusual in suicidal hangings and could occur much more commonly in homicidal strangulation,” said Baden.

“The prominent hemorrhage in the soft tissues of the neck next to the fractures is evidence of a fresh neck compression that could have caused the death.”

“I’ve not seen in 50 years where that occurred in a suicidal hanging case,” the 85-year-old medical legend told Fox News.

Jeffrey Epstein Again Disappears From View, but What About Mossad? by Philip Giraldi

It looks like the Jeffrey Epstein trail leads back to Mossad, the Israeli intelligence agency, which is reason enough for the mainstream media not to follow it, letting the Epstein story die. From Philip Giraldi at strategic-culture.org:

I have long argued that pedophile Jeffrey Epstein was clearly an intelligence agent and that he was most likely working for the Israeli external service Mossad. My belief was based on the nature of his activity, which suggested that he was able to blackmail important Americans using the sex tapes that he had been able to make at his Manhattan mansion. Put that together with the existence of his fake Austrian passport, as well as former Miami federal attorney Alexander Acosta’s comments  and it would seem that an intelligence connection is a sine qua non.

Acosta was particularly damning. When asked “Is the Epstein case going to cause a problem [for confirmation hearings]?” he replied “…that I had just one meeting on the Epstein case.” He’d cut the non-prosecution deal with one of Epstein’s attorneys because he had “been told to back off,” that Epstein was above his pay grade. “I was told Epstein belonged to intelligence and to leave it alone.”

END_OF_DOCUMENT_TOKEN_TO_BE_REPLACED

The mainstream media has pretty much shot the Jeffrey Epstein story down the memory hole, but Whitney Webb at alternative news site Mint Press News keeps plugging away. From Webb at mintpressnews.com:

Several now-censored reports from the 1990s and early 2000s reveal that Prince Andrew’s involvement with the minors exploited by Jeffrey Epstein is greater than previously believed.

While the Jeffrey Epstein scandal has largely faded from media coverage in the United States, it has continued to attract attention abroad, particularly in the United Kingdom in connection with Epstein’s long-standing association with Prince Andrew, the Duke of York and the Queen’s son.

The Epstein-Prince Andrew relationship has long been a fascination of the U.K. press, with numerous articles dating back to the early 2000s detailing the most outrageous aspects of their relationship. Prior to that, Epstein had also garnered attention from U.K. newspapers regarding his association with Ghislaine Maxwell, whose reputation in the U.K. is rather notorious, as was that of her father, Robert Maxwell.

Yet, since Epstein’s arrest in July, many of these older articles on Epstein and Maxwell, as well as those focusing on the Epstein-Prince Andrew relationship, have disappeared from the archives of several prominent U.K. media outlets that reported on these relationships years ago.