The Praetorian Psyop, by The Zman

The FBI and other intelligence agencies will always be able to gin up a suitable class of villains. This mostly scares the fearful in Washington. From The Zman at thezman.com:

The Pentagon announced that it will be conducting guerilla warfare training in North Carolina in the coming weeks. The point of the exercise is to train American soldiers to battle “seasoned freedom fighters”, according to the Army. They say they made the announcement so that the public would not be shocked by the sound of weapons or the sight of the soldiers conducting war games. The exercises are going to be conducted on private lands in the western part of the state

This announcement coincides with the Department of Justice announcing the formation of a specialized unit focused on domestic terrorism. According to the DOJ, “We have seen a growing threat from those who are motivated by racial animus, as well as those who ascribe to extremist anti-government and anti-authority ideologies.” What they are saying is the hysterical reaction to the January 6 protests is entirely justified as there is an invisible army out there making bombs.

Many assume this is about the ongoing shift toward treating all opposition to the regime as domestic terrorism. The color revolution they orchestrated against Trump will become a full-time revolution. Politicians will go on about the threat to our democracy while agents of the secret police drag people off for made up crimes. Liberal democracy is in its terror phase. The gross violation of rights is justified by the perpetual state of emergency over the alleged threat to the system.

There is some of that, for sure, but the FBI has been framing people as domestic terrorists for generations. They used to work with organized crime to frame people for murders committed by gangsters. That made the FBI look good and they did not have to do any real work. They orchestrated antiwar protests in the 1960’s and racial crimes in the South during the civil rights era. They framed too many people to count during the Bush years in the name of fighting Islamic terrorism.

What if someone in the military who’s not clued in that UFO stories are Pentagon psyops shoots on what he believes is an aircraft from Mars and it’s actually a Russian or Chinese jet? From Finian Cunningham at strategic-culture.org:

The stoking of UFO controversy appears to be a classic psyops perpetrated by U.S. military intelligence for the objective of population control, Finian Cunningham writes.

There are reasons to be skeptical. After decades of stonewalling on the issue, suddenly American military chiefs appear to be giving credence to claims of UFOs invading Earth. Several viral video clips purporting to show extraordinary flying technology have been “confirmed” by the Pentagon as authentic. The Pentagon move is unprecedented.

The videos of the Unidentified Flying Objects were taken by U.S. air force flight crews or by naval surveillance and subsequently “leaked” to the public. The question is: were the “leaks” authorized by Pentagon spooks to stoke the public imagination of visitors from space? The Pentagon doesn’t actually say what it believes the UFOs are, only that the videos are “authentic”.

A Senate intelligence committee is to receive a report from the Department of Defense’s Unidentified Aerial Phenomena (UAP) Task Force next month. That has also raised public interest in the possibility of alien life breaching our skies equipped with physics-defying technology far superior to existing supersonic jets and surveillance systems.

Several other questions come to mind that beg skepticism. Why does the phenomenon of UFOs or UAP only seem to be associated with the American military? This goes back decades to the speculation during the 1950s about aliens crashing at Roswell in New Mexico. Why is it that only the American military seems privy to such strange encounters? Why not the Russian or Chinese military which would have comparable detection technology to the Americans but they don’t seem to have made any public disclosures on alien encounters? Such a discrepancy is implausible unless we believe that life-forms from lightyears away have a fixation solely on the United States. That’s intergalactic American “exceptionalism” for you!

Ground Control to Planet Lockdown: This Is Only a Test, by Pepe Escobar

How long does lock down go on? Could it go on forever? From Pepe Escobar at strategic-culture.org:

As much as Covid-19 is a circuit breaker, a time bomb and an actual weapon of mass destruction (WMD), a fierce debate is raging worldwide on the wisdom of mass quarantine applied to entire cities, states and nations.

Those against it argue Planet Lockdown not only is not stopping the spread of Covid-19 but also has landed the global economy into a cryogenic state – with unforeseen, dire consequences. Thus quarantine should apply essentially to the population with the greatest risk of death: the elderly.

With Planet Lockdown transfixed by heart-breaking reports from the Covid-19 frontline, there’s no question this is an incendiary assertion.

In parallel, a total corporate media takeover is implying that if the numbers do not substantially go down, Planet Lockdown – an euphemism for house arrest – remains, indefinitely.

Michael Levitt, 2013 Nobel Prize in chemistry and Stanford biophysicist, was spot on when he calculated that China would get through the worst of Covid-19 way before throngs of health experts believed, and that “What we need is to control the panic”.

Let’s cross this over with some facts and dissident opinion, in the interest of fostering an informed debate.

END_OF_DOCUMENT_TOKEN_TO_BE_REPLACED

The Legacy of Reagan’s Civilian ‘Psyops’, by Robert Parry

The present surveillance state owes much to the Reagan administration. From Robert Parry at consortiumnews.com:

Special Report: When the Reagan administration launched peacetime “psyops” in the mid-1980s, it pulled in civilian agencies to help spread these still-ongoing techniques of deception and manipulation, reports Robert Parry.

Declassified records from the Reagan presidential library show how the U.S. government enlisted civilian agencies in psychological operations designed to exploit information as a way to manipulate the behavior of targeted foreign audiences and, at least indirectly, American citizens. 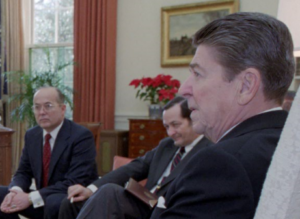 A just-declassified sign-in sheet for a meeting of an inter-agency “psyops” committee on Oct. 24, 1986, shows representatives from the Agency for International Development (USAID), the State Department, and the U.S. Information Agency (USIA) joining officials from the Central Intelligence Agency and the Defense Department.

Some of the names of officials from the CIA and Pentagon remain classified more than three decades later. But the significance of the document is that it reveals how agencies that were traditionally assigned to global development (USAID) or international information (USIA) were incorporated into the U.S. government’s strategies for peacetime psyops, a military technique for breaking the will of a wartime enemy by spreading lies, confusion and terror.

Essentially, psyops play on the cultural weaknesses of a target population so they could be more easily controlled or defeated, but the Reagan administration was taking the concept outside the traditional bounds of warfare and applying psyops to any time when the U.S. government could claim some threat to America.

This disclosure – bolstered by other documents released earlier this year by archivists at the Reagan library in Simi Valley, California – is relevant to today’s frenzy over alleged “fake news” and accusations of “Russian disinformation” by reminding everyone that the U.S. government was active in those same areas.

The U.S. government’s use of disinformation and propaganda is, of course, nothing new. For instance, during the 1950s and 1960s, the USIA regularly published articles in friendly newspapers and magazines that appeared under fake names such as Guy Sims Fitch.

However, in the 1970s, the bloody Vietnam War and the Pentagon Papers’ revelations about U.S. government deceptions to justify that war created a crisis for American propagandists, their loss of credibility with the American people. Some of the traditional sources of U.S. disinformation, such as the CIA, also fell into profound disrepute.

This so-called “Vietnam Syndrome” – a skeptical citizenry dubious toward U.S. government claims about foreign conflicts – undermined President Reagan’s efforts to sell his plans for intervention in the civil wars then underway in Central America, Africa and elsewhere.

To continue reading: The Legacy of Reagan’s Civilian ‘Psyops’

How US Flooded the World with Psyops, by Robert Parry

This is an interesting, but detailed and long, account of how the Reagan administration set up psyops sell its interventions, primarily in Central America, both at home and abroad. From Robert Parry at consortiumnews.com:

Newly declassified documents from the Reagan presidential library help explain how the U.S. government developed its sophisticated psychological operations capabilities that – over the past three decades – have created an alternative reality both for people in targeted countries and for American citizens, a structure that expanded U.S. influence abroad and quieted dissent at home.

The documents reveal the formation of a psyops bureaucracy under the direction of Walter Raymond Jr., a senior CIA covert operations specialist who was assigned to President Reagan’s National Security Council staff to enhance the importance of propaganda and psyops in undermining U.S. adversaries around the world and ensuring sufficient public support for foreign policies inside the United States.

Raymond, who has been compared to a character from a John LeCarré novel slipping easily into the woodwork, spent his years inside Reagan’s White House as a shadowy puppet master who tried his best to avoid public attention or – it seems – even having his picture taken. From the tens of thousands of photographs from meetings at Reagan’s White House, I found only a couple showing Raymond – and he is seated in groups, partially concealed by other officials.

But Raymond appears to have grasped his true importance. In his NSC files, I found a doodle of an organizational chart that had Raymond at the top holding what looks like the crossed handles used by puppeteers to control the puppets below them. Although it’s impossible to know exactly what the doodler had in mind, the drawing fits the reality of Raymond as the behind-the-curtains operative who was controlling the various inter-agency task forces that were responsible for implementing various propaganda and psyops strategies.

To continue reading: How US Flooded the World with Psyops