In two short months Biden has managed to undo what Trump had done at the southern border—staunch the flow of illegal immigrants—and turn it into a hellish nightmare. From Charlotte Cuthbertson at theepochtimes.com:

The family-unit holding cells smell like urine and vomit. Fights break out in the unaccompanied-minor cells. Scabies, lice, the flu, and COVID-19 run rampant.

Up to 80 individuals are squeezed into each 24- by 30-foot cell, and there aren’t enough mattresses for everyone. Sheets of plastic divide the rooms.

“Any diseases that are in there, it’s being kept in there, like a petri dish. The smell is overwhelming,” a Border Patrol agent said, describing the conditions in a facility in south Texas. The agent, Carlos (not his real name), spoke to The Epoch Times on condition of anonymity, for fear of repercussions.

Border Patrol agents on the front lines are getting so frustrated that they’re now risking their livelihoods to reveal what’s really going on in the illegal immigrant processing facilities.

One or two agents are left to control 300 to 500 people during a shift. No agent wants to report physical or sexual assaults between the aliens because they’ll get blamed for “letting it happen.” They’re also forced to separate a child from an extended family member because he or she is not a biological parent.

The number of unaccompanied minors—children under 18 who arrive without a parent—is buckling the system. The law requires Border Patrol to prioritize unaccompanied minors and transfer them to the Department of Health and Human Services within 72 hours.

“We’re getting them out of here as quickly as possible, but we are so overwhelmed right now,” Carlos said. “It used to be easy to get them out in 72 hours. Not anymore. They’re staying here for 10, 12 days. It’s horrible.”

So far this fiscal year (from Oct. 1, 2020), Border Patrol has apprehended more than 29,000 unaccompanied children crossing the border illegally. In all of fiscal 2020, just over 33,000 were apprehended, according to Customs and Border Protection (CBP) statistics.

END_OF_DOCUMENT_TOKEN_TO_BE_REPLACED

Can Trump Stop the Invasion? by Patrick J. Buchanan

The majority of people coming over our southern border will end up getting more from the system than they put it, and those people are coming in record numbers. From Patrick J. Buchanan at buchanan.org:

In its lead editorial Wednesday, The New York Times called upon Congress to amend the National Emergency Act to “erect a wall against any President, not just Mr. Trump, who insists on creating emergencies where none exist.”

Trump “took advantage” of a “loophole” in the NEA, said The Times, to declare “a crisis at the border, contrary to all evidence.”

The Times news desk, however, apparently failed to alert the editorial page on what the top story would be that day.

“Record Numbers Crossing to U.S., Deluging Agents” was the page-one headline. The Times quoted Kevin K. McAleenan, commissioner of Customs and Border Protection: “The system is well beyond capacity, and remains at the breaking point. … This is … a border security and a humanitarian crisis.”

Reporter Caitlin Dickerson explained what is behind CPB’s alarm: “The number of migrant families crossing the Southwest border has once again broken records, with unauthorized entries nearly double what they were a year ago.”

She continued, “More than 76,000 migrants crossed the border without authorization in February, an 11-year high … newcomers continue to arrive, sometimes by the busload, at the rate of 2,200 a day.”

Only if one believes in open borders is this not an emergency, not a crisis. Consider the budgetary impact alone of this invasion.

The majority of migrants breaching the border are from Mexico and Central and South America. Most do not read, write or speak our English language, are not college graduates and arrive with few skills.

Almost all will enter the half of the U.S. population that consumes more in social benefits during their lifetime than they will ever pay in taxes.

With the U.S. debt over 100 percent of gross domestic product and the deficit running at nearly 5 percent of GDP, at full employment, the burden the migrant millions are imposing upon our social welfare state will one day collapse the system. For these folks are coming to a country where education K-12 is free and where, if the Democrats take over, pre-K through college will be free.

These folks will be eligible for city, county, state and federal programs that provide free or subsidized food, rent, housing and health care.

All were enacted for the benefit of U.S. citizens. Uninvited, the Third World is coming to partake of and enjoy them.

END_OF_DOCUMENT_TOKEN_TO_BE_REPLACED

Regardless of how you feel about immigration, this is disturbing. From Tom Jones, Mari Payton, and Bill Feather at nbcsandiego.com:

The documents detail an intelligence-gathering effort by the United States and Mexican authorities, targeting more than 50 people including journalists, an attorney, and immigration advocates

This story has been updated with a new statement from Customs and Border Protection and a response from the ACLU.

Documents obtained by NBC 7 Investigates show the U.S. government created a secret database of activists, journalists, and social media influencers tied to the migrant caravan and in some cases, placed alerts on their passports.

At the end of 2018, roughly 5,000 immigrants from Central America made their way north through Mexico to the United States southern border. The story made international headlines.

As the migrant caravan reached the San Ysidro Port of Entry in south San Diego County, so did journalists, attorneys, and advocates who were there to work and witness the events unfolding.

But in the months that followed, journalists who covered the caravan, as well as those who offered assistance to caravan members, said they felt they had become targets of intense inspections and scrutiny by border officials.

Arrests Of Migrant Families At The Border Hits All-Time High, by Tyler Durden

Maybe the US should build a wall. From Tyler Durden at zerohedge.com:

What was that again about the border emergency being a “made up” crisis? 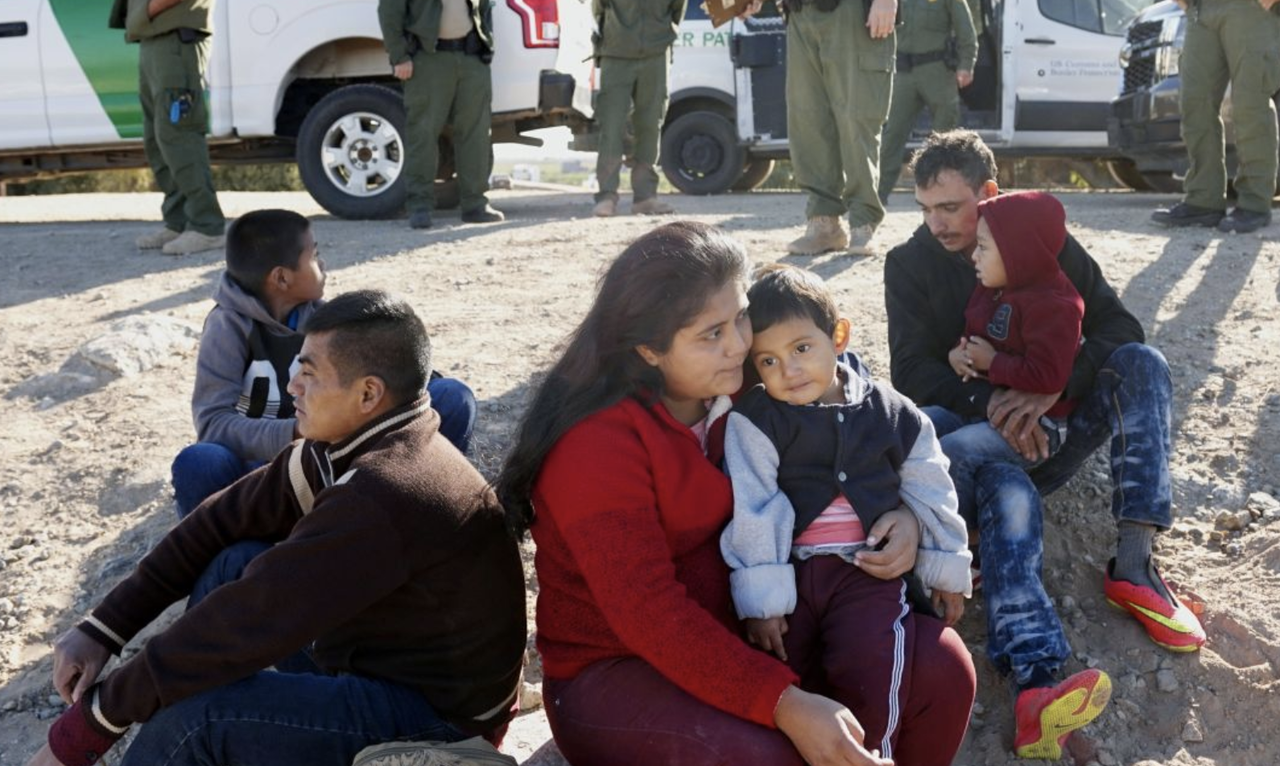 According to federal data, more immigrant families – mostly from Central America – have been apprehended at the border since the beginning of the fiscal year than during any full-year period in recent memory.

From the start of the federal fiscal year in October through February, the Border Patrol arrested 136,150 people traveling as families for crossing the border illegally, according to data released Tuesday. The prior record for a 12-month period was 107,212, during the fiscal year that ended last September.

As WSJ explains, the acceleration in apprehensions is “the latest illustration of how many parents and children are seeking asylum in the U.S., primarily to escape violence, poverty and hunger in Central America.” In other words, the rise in apprehensions isn’t so much a factor of increased enforcement as it is a rise in the number of migrants heading toward the border.

The surge didn’t happen all at once – rather, the number of migrants has been climbing since 2015, when fewer than 40,000 migrants were apprehended at the border.  Since US Customs and Border Protection began counting family units in 2013, there have been 2.6 million apprehensions along the US’s southern border.

Putin is Killing Millions of Americans! by Ann Coulter

The only thing that would make liberals consider illegal immigration a problem is if it could somehow be attributed to Vladimir Putin. From Ann Coulter at anncoulter.com:

I don’t know what Trump said during that two hours when he met privately with Russian President Vladimir Putin, but like so many in the media, I know what I hope he said: Mr. Putin, I need you to publicly admit your complicity in our illegal alien problem.

Only if Putin owns up to deploying a vast network of Russian assets to personally direct the movements of millions of illegal aliens across the Sonoran Desert, through dozens of checkpoints and into our country, in fulfillment of his master plan to attack America’s financial viability, national security and future prospects, will the media, the Democratic Party and corporate Republicans ever emerge from their stupor and admit that we have a huge problem on our southern border.

Illegal immigrants have killed multiple times more Americans than Russia has in its entire history — or could ever hope to kill, even with a well-placed nuclear bomb.

But nothing will be done, unless we can prove Putin is behind it.

Our media and government want you to fixate on Russia’s annexation of Crimea as the big problem facing our country, hoping you’ll forget about the gaping hole on our border.

I haven’t counted to see how many Americans died as a result of Putin’s reacquiring Crimea — yes, I have! ZERO. Meanwhile, Mexican drug couriers kill more Americans every week than the Communist Soviet Union did when it shot down Korean flight 007 for flying into its airspace, almost starting a nuclear war.

Obsessing over irrelevant, unsolvable problems in remote parts of the globe is how liberals prove they are intellectuals. North Korea, Syria, Russia — that’s what you’re supposed to care about. Not your own country. Only Walmart shoppers care about their own country.

It would be as if in 1939, as the Nazi threat was looming, British newspapers discussed nothing but the bushfires in Victoria, Australia. How many died? Do they need our help? What shall we do? Where does the prime minister stand?

To continue reading: Putin is Killing Millions of Americans!