Children’s Health Defense Responds to Biden’s ‘Declaration of War Against the Unvaccinated,’ by Mary Holland

Know what’s going on and fight back. It’s the only way we’ll stop this idiocy. From Mary Holland at Children’s Health Defense via lewrockwell.com:

President Biden’s speech last week was stunning. As the Associated Press aptly reported, the president pivoted from a war on the coronavirus to a war on the “unvaccinated.”

Coercing the “unvaccinated” was the president’s first and foremost point — the only way back to normal is through vaccination, testing and masks, he said.

But the president went much further — he vilified the unvaccinated. They are not “doing the right thing.” They are “keeping us from turning the corner.” They are “blocking public health.”

“The refusal [of the unvaccinated] has cost all of us,” Biden said.

Addressing the 80 million refusers, the president said, as if speaking to unruly children, “our patience is wearing thin.”

He went further still, empathizing with the anger and anxiety of those who’ve been vaccinated and thus presumably protected. He threatened, “We cannot let the unvaccinated undo this progress,” although he muddled the words in delivery.

Biden also took a potshot at dissenting doctors, suggesting they are “conspiracy theorists,” not “real doctors.” His comments echoed the calls of others, including the Federation of State Medical Boards, to take away the medical licenses of doctors who dare to raise questions about vaccine safety.

The president’s speech was deeply disturbing. He exhorted medical coercion of an experimental gene therapy for a virus with a 99% survival rate for a large portion of the population, and for which no one bears financial liability in cases where injuries or deaths occur.

Furthermore, Biden misled the public on vaccine approval. He suggested that because the U.S. Food and Drug Administration (FDA) approved the Pfizer Comirnaty vaccine on Aug. 23, there’s nothing more for the unvaccinated to “wait for.”

Science Denied: The Biden Vaccine Mandate, by Jeffrey A. Tucker

Logic doesn’t come from philosophical savages (i.e. Democrats) and Joe Biden wouldn’t recognize science if it stole his ice cream. From Jeffrey A. Tucker at brownstone.org:

President Biden has decided to go hard on the virus. No more Mr. Nice Guy. Sadly for him, those tiny little pathogens don’t pay taxes, don’t vote, don’t have Social Security numbers, can’t be drafted, and don’t answer phone calls from poll takers, which is to say that he and his agencies cannot really control them. That must be frustrating, poor man.

Instead his plan is to control what he can control: people, and, most immediately, federal workers and the employees of large regulated companies. For him, the key to crushing the virus is the vaccine. Not enough people are obeying his demand for near-universal vaccination.

In a maniacal move of wild desperation – or as an excuse to try out the most extreme powers of his office – he is using every weapon that he believes he has to assure compliance with his dream of injecting as many arms as possible. Only then will we crush the virus, all thanks to his leadership, all the complaints about “freedom” be damned – and never mind that the realization of his dream did not work in Israel or the UK.

What are the immediate problems here? At least five:

1. The Biden mandate pretends that the only immunity is injected, not natural. And so it has been from the beginning of this pandemic, even though all science for at least a year – actually you can say centuries – contradicts that. Indeed, we’ve known about natural immunity since 400 B.C when Thucydides first wrote of the great Athens plague that revealed that “they knew the course of the disease and were themselves free from apprehension.” Biden’s mandate could affect 80 million people but far more than that have likely been exposed and gained robust immunity regardless of vaccination status.

Admission Against Interest: White House Chief of Staff Admits Vaccine Mandate is a “Work Around” the Constitutional Objections, by Jonathan Turley

It’s obvious that using OSHA to enforce the vaccine mandate is a way to get around Constitutional objections and avoid Supreme Court invalidation. However, coming out and openly saying that was a stupid legal tactic. From Jonathan Turley at jonathanturley.org:

In the law, it is called an admission against interest or an out-of-court statement by a party that, when uttered, is against the party’s pecuniary, proprietary, or penal interests. In politics, it is called just dumb. White House chief of staff Ronald Klain offered a doozy this week when he admitted that the announced use of the authority of the Occupational Safety and Health Administration (OSHA) for a vaccine mandate was a mere “work around” of the constitutional limit imposed on the federal government. The problem is that the thing being “worked around” is the Constitution. Courts will now be asked to ignore the admission and uphold a self-admitted evasion of constitutional protections.

Notably, before inauguration, Klain publicly assured the public that Biden would that, on “his first day in office, I will issue a nationwide masking mandate, requiring that people wear masks where the federal authority extends and then urging governors and other local officials to impose mask mandates in their states.” That statement was then walked back due to the lack of legal authority to issue such a mandate.

Klain retweeted MSNBC’s Stephanie Ruhle, who posted, “OSHA doing this vaxx mandate as an emergency workplace safety rule is the ultimate work-around for the Federal govt to require vaccinations.”

The “work around” was needed because, as some of us have previously during both the Trump and Biden Administration, the federal government does not have clear authority to impose public health mandates. Authority for such mandates has traditionally been recognized within state authority.

The Borg Says: “Assimilate or Starve!”, by Doug “Uncola” Lynn

If you truly love liberty you have to be willing to fight and maybe die for it. From Doug “Uncola” Lynn at theburningplatform.com: 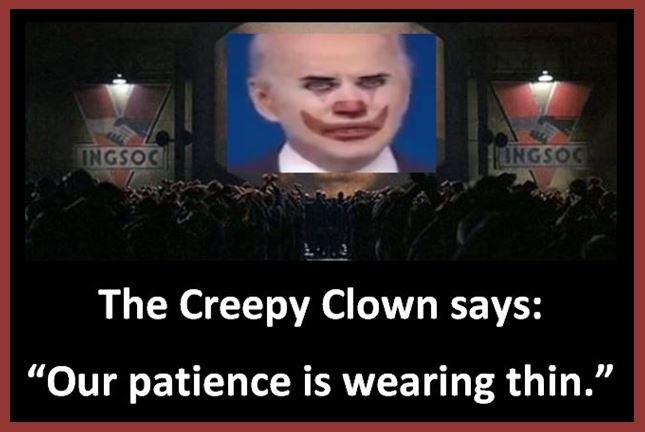 : a totalitarian system of government in which a single authoritarian party controls state-owned means of production

“So tonight, I’m announcing that the Department of Labor is developing an emergency rule to require all employers with 100 or more employees that together employ over 80 million workers to ensure their workforces are fully vaccinated or show a negative test at least once a week.”

Obviously, the billionaires and organizations behind The Great Reset®, in coordination with Big Pharma, have taken control of the CDC and WHO in order to force Covid mandates upon the entire world.

Of course, the billionaires and organizations behind The Great Reset® have also publically professed the need for global “sustainability” and depopulation.

So if anyone wishes to place their faith in these billionaires and organizations, they should have at it.  If they believe in the sanctity of Big Pharma profits, then they should go on and get vaccinated.  If they want to place their trust in an illegal president who abandoned Americans to the Taliban in Afghanistan, then good luck with that, too.

King Joe actually said that the unvaccinated have to be vaccinated to protect the vaccinated. If the vaccine works, why? And if it doesn’t work, why take it? Don’t ask the King, he’s way too far gone to answer those kinds of questions. From Megan Redshaw at childrenshealthdefense.org:

In his most forceful move yet, President Biden on Thursday ordered sweeping new federal COVID vaccine requirements for as many as 100 million Americans — including private sector employees, healthcare workers and federal contractors — threatening thousands in fines for businesses that do not comply.

In his speech, Biden made no exception for the millions of Americans with natural immunity, and did not mention exemptions for those with medical conditions or sincerely held religious beliefs — as White House Press Secretary Jen Psaki in a Wednesday press briefing had suggested would be the case.

"Biden’s efforts to coerce federal workers + those who have elected to remain unvaccinated is clearly in violation of Nuremberg Code, which has been incorporated into U.S. federal and state law. This is a sad day for ethics + rule of law.” — Mary Hollandhttps://t.co/AV0HjSxxGg

Speaking at the White House, Biden sharply criticized millions of Americans who remain unvaccinated, despite months of availability and incentives.

“We’ve been patient. But our patience is wearing thin, and your refusal has cost all of us,” Biden said. The unvaccinated minority “can cause a lot of damage, and they are.”

According to the Associated Press (AP), Biden’s latest move is driven at least in part by self-interest, as he tries to defend his own job performance on the issue most important to voters.

The resurgence of the virus has sent Biden’s poll numbers to the lowest point yet of his presidency, AP reported. An AP-NORC poll conducted in August found 54% of Americans approved of Biden’s stewardship of the pandemic, down from 66% the month before, driven by a drop in support among Republicans and political independents.