END_OF_DOCUMENT_TOKEN_TO_BE_REPLACED

Although he has plenty of competition, Brennan may have been the scuzziest intelligence operative of them all. From Tyler Durden at zerohedge.com:

Attorney General William Barr told “The Story with Martha MacCallum” that by the time Trump was inaugurated in January 2017, it had become clear that allegations raised by the FBI against a former Trump campaign aide George Papadopoulos were largely baseless, and that pursuing George Papadopoulos’ “had very little probative value.”

John Durham isn’t just looking at the FBI. He’s looking at other agencies, departments, and private actors. The other agents is cooperating very well. pic.twitter.com/VyM5Wp7VqI

Additionally, Barr admitted, in a very candid (for him) moment, that federal prosecutor John Durham (who is scrutinizing the Russia investigation) “isn’t just looking at the FBI, he’s looking at other agencies, departments, and private actors,” but  that “the other agencies are cooperating very well.”

Which is all the more intriguing as, at the same time as his interview aired, The New York Times dropped a bombshell, reporting that, according to three people briefed on the inquiry, Durham’s investigation has begun examining the role of the former C.I.A. director John O. Brennan in how the intelligence community assessed Russia’s 2016 election interference.

The Brennan Dossier: All About a Prime Mover of Russiagate, by Aaron Maté

John Brennan, former head of the CIA, is the man behind Russiagate. As such, he deserves a suite in the gray-bar hotel, not a cushy sinecure on MSNBC. From Aaron Maté at realclearinvestigations.com:

In the waning days of the Obama administration, the U.S. intelligence community produced a report saying Russian President Vladimir Putin had tried to swing the 2016 election to Donald Trump.

The January 2017 report, called an Intelligence Community Assessment, followed months of leaks to the media that had falsely suggested illicit ties between the Trump campaign and the Kremlin while also revealing that such contacts were the subject of a federal investigation. Its release cast a pall of suspicion over Trump just days before he took office, setting the tone for the unfounded allegations of conspiracy and treason that have engulfed his first term.

What was Brennan’s motive? Among the possibilities is hostility within his camp toward Michael Flynn (foreground), Trump’s future reform-minded national security adviser.
AP Photo/Pablo Martinez Monsivais
The ICA’s blockbuster finding was presented to the public as the consensus view of the nation’s intelligence community. As events have unfolded, however, it now seems apparent that the report was largely the work of one agency, the CIA, and overseen by one man, then-Director John Brennan, who closely directed its drafting and publication with a small group of hand-picked analysts.

END_OF_DOCUMENT_TOKEN_TO_BE_REPLACED

It’s Trump vs. the Deep State vs. the Rest of Us, by Ryan McMaken

One huge benefit of Trump’s presidency is that it’s exposed the Deep State for everyone except those who refuse to look. From Ryan McMaken at mises.org:

One of the best side effects of the Trump presidency has been the hostility of the so-called “deep state” or “intelligence community” directed at the president.

This, in turn, has led many Americans to realize that America’s powerful, un-elected secret police agencies serve an agenda all their own, and that they choose sides in political controversies. Consequently, polls show one’s views of the CIA and the FBI depend largely on one’s ideological bent. Polls from Fox News and NBC news in recent years show that as various government bureaucracies have ratcheted up their hostility to Trump, more Democrats and Hillary Clinton voters have said they trust the CIA and the FBI.

Why the president and this deep state should be at odds has never been obvious to casual observers. Last month, however, in an article titled “Trump’s War on the ‘Deep State’ Turns Against Him,” the New York Times at last explained that there is indeed very real enmity between Trump and agencies such as the CIA and the FBI. The Times contends that Trump “went to war with the professional staff” of the intelligence agencies and the State Department.

END_OF_DOCUMENT_TOKEN_TO_BE_REPLACED END_OF_DOCUMENT_TOKEN_TO_BE_REPLACED

DOJ Bloodhounds on the Scent of John Brennan, by Ray McGovern

We’ll believe it when Brennan’s indicted. From Ray McGovern at consortiumnews.com:

With Justice Department investigators’ noses to the ground, it should be just a matter of time before they identify Brennan as fabricator-in-chief of the Russiagate story, says Ray McGovern.

The Times reports that the Justice Department plans to interview senior CIA officers to focus on the allegation that Russian President Vladimir Putin ordered Russian intelligence to intervene in the 2016 election to help Donald J. Trump. DOJ investigators will be looking for evidence to support that remarkable claim that Special Counsel Robert Mueller’s final report failed to establish.

Despite the collusion conspiracy theory having been put to rest, many Americans, including members of Congress, right and left, continue to accept the evidence-impoverished, media-cum-“former-intelligence-officer” meme that the Kremlin interfered massively in the 2016 presidential election.

One cannot escape the analogy with the fraudulent evidence of weapons of mass destruction in Iraq. As in 2002 and 2003, when the mania for the invasion of Iraq mounted, Establishment media have simply regurgitated what intelligence sources like Brennan told them about Russia-gate.

No one batted an eye when Brennan told a House committee in May 2017, “I don’t do evidence.” 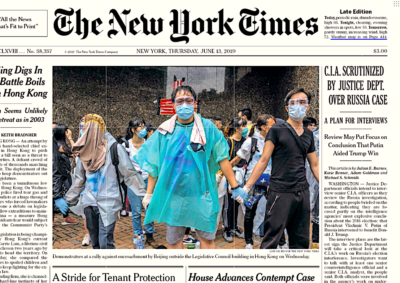 As we Veteran Intelligence Professionals for Sanity have warned numerous times over the past two plus years, there is no reliable forensic evidence to support the story that Russia hacked into the DNC. Moreover, in a piece I wrote in May, “Orwellian Cloud Hovers Over Russia-gate,” I again noted that accumulating forensic evidence from metadata clearly points to an inside DNC job — a leak, not a hack, by Russia or anyone else.