“No Resistance” to Price Increases, by Wolf Richter

With the exception of global bond markets and their central bank props, the inflationary psychology is taking hold. From Wolf Richter at wolfstreet.com:

The Restaurant Industry Reacts to a Messed-Up Economy Plagued by Shortages & Transportation Snags.

These reports are coming from all directions, from small mom-and-pop operations to large corporations: Input costs are surging, wages that companies have to pay to attract workers are rising, transportation costs are surging amid driver shortages, supply chains are tangled up and there are delays and bottlenecks, and suppliers suddenly can’t deliver because they’ve run out of something, and companies are furiously juggling these issues, and they’re raising their prices to make up for those higher costs, and there is no resistance to these higher prices.

Consumers mostly just pay whatever – when before, higher prices would have entailed the loss of some customers and some revenues, which might have forced companies to back off those prices.

Chipotle Mexican Grill was the latest company to confirm this phenomenon of higher costs and higher prices, and no resistance by consumers to higher prices.

It had raised prices by 3.5% to 4% in order to deal with higher labor costs, and so far, there has been “no resistance” to higher prices, CFO Jack Hartung told analysts during the earnings call today.

Turns out, those price increases, originally designed to pay for higher labor costs, will now be eaten up by higher raw material costs and the costs associated with the staffing shortages at suppliers, Harting said, adding, “It shouldn’t be a surprise to anyone that Q3 is going to be challenged by several industry-wide issues.”

What I See as Retail Landlord, One Year After (and we’re STILL Forgiving and Deferring Rent for Our Hardest-Hit Tenants) by John McNellis

Who’s going to survive and who’s going to succumb to the economic dislocations stemming from the coronavirus measures? John McNellis’ at wolfstreet.com insights:

Some Green Shoots, but Finding them Is Tricky.

A year ago, our shopping centers were shuttered, and our tenants so crushed we forgave their April rent. Believing the world would reopen by mid-April, we thought our merchants would have a couple weeks of free-rent to make up for March’s closure. We couldn’t have been more wrong.

A year later and we’re still forgiving and deferring rent for our hardest-hit tenants. And hoping the Governor will finally permit them to operate at 100 percent capacity.

Where are we today? Starting with what you already know, second and third tier malls, particularly enclosed malls, are dead and gone and aren’t coming back. Their dinosaur anchors—Sears, J.C. Penny, Macy’s, and the like—were sinking in the tar pits long before the virus’s coup de grace.

In counter point, discounters like Marshall’s, TJ Maxx and Ross have thrived in the last year—Ross’s stock has doubled—suggesting it’s neither the virus nor e-commerce that killed off the mall habitués; rather it’s the mismanagement of the Jurassic retailers themselves.

The U.S. Has Lost More Than 110,000 Restaurants, Setting The Stage For A Commercial Real Estate Collapse Of Epic Proportions, by Michael Snyder

You can’t take a sixth of the restaurants out of business without a lot of negative consequences. From Michael Snyder at themostimportantnews.com:

The restaurant industry is in the midst of a complete and total meltdown that is unlike anything that we have ever seen before.  If you ask Google how many restaurants there are in the United States, it will tell you that there are 660,755, although that number is a few years old.  But for the purposes of this article, that is a good enough estimate.  Americans love to eat out, and restaurant workers are some of the hardest working people in the entire country.  So it is incredibly sad to see more restaurants constantly going under.  In some cases, restaurants that have served their communities for decades are deciding to permanently close their doors.  For example, over the weekend Sammy’s Roumanian Steakhouse in New York City announced that it had finally reached the end of the road…

The Lower East Side fixture was famous for its latkes spreads, chopped liver, and vodka bottles frozen in blocks of ice and was known as a boisterous party spot frequented by celebrities.

Unfortunately, Sammy’s is far from alone.

In fact, in a recent article that he penned for Fox Business, Adam Piper lamented the fact that more than 100,000 U.S. restaurants have gone out of business during this pandemic…

State and local governments have wielded the coronavirus pandemic as license to steal freedom and opportunity in pursuit of unprecedented omnipotence. Unreasonable, unnecessary and hypocritical actions have forced over 100,000 restaurants to close and endanger countless others.

And according to Bloomberg, the true number of dead restaurants is now over 110,000…

More than 110,000 restaurants have closed permanently or long-term across the country as the industry grapples with the devastating impact of the Covid-19 pandemic.

Just think about that.

Covid-19 lockdowns have devastated the restaurant industry. From Tyler Durden at zerohedge.com:

The National Restaurant Association (NRA) sent a damning letter to Congress today (Dec. 7) addressing the collapse of more than one hundred thousand restaurants across the country this year because of the virus pandemic. In just the last three months, the letter said more than 10,000 eateries have closed, and thousands of others are in “economic freefall.” 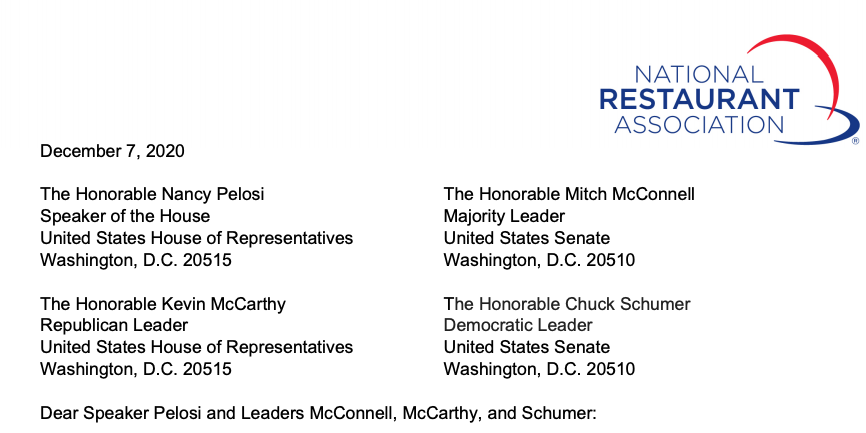 The letter goes into detail about the association’s most recent nationwide survey, which determines that most restaurants are still experiencing a plunge in sales revenue. Many operators believe more furloughs or layoffs are imminent. As we noted last week, the layoffs have already begun.

“What these findings make clear is that more than 500,000 restaurants of every business type— franchise, chain, and independent—are in an unprecedented economic decline. And for every month that passes without a solution from Congress, thousands of more restaurants across the country will close their doors for good,” Sean Kennedy, executive vice president of public affairs at the association, said in a letter to Congress.

According to the association’s survey,

In a War on Restaurants, Media Tout the Lockdown Narrative, by Jeffrey A. Tucker

Among other things, coronavirus totalitarianism is a war on pleasure, like the pleasure of dining out. From Jeffrey A. Tucker at aier.org:

Just when the fear starts to subside, and growing public skepticism seems to push governors into opening, something predictable happens. The entire apparatus of mass media hops on some new, super-scary headline designed to instill more Coronaphobia and extend the lockdowns yet again.

It’s a cycle that never stops. It comes back again and again.

A great example occurred this weekend. A poll appeared on Friday from the Kaiser Family Foundation. It showed that confidence in Anthony Fauci is evaporating along with support for lockdowns and mandatory Covid vaccines.

The news barely made the headlines, and very quickly this was overshadowed by a scary new claim: restaurants will give you Covid!

It’s tailor-made for the mainstream press. The study is from the CDC, which means: credible. And the thesis is easily digestible: those who test positive for Covid are twice as likely as those who tested negative to have eaten at a restaurant.

“Eating and drinking on-site at locations that offer such options might be important risk factors associated with SARS-CoV-2 infection,” the study says.

After six months of this Corona Kabuki dance, driven by alarmist media and imposed by wacko, power-abusing governors and mayors, I’ve become rather cynical about the whole enterprise, so I mostly ignore the latest nonsense.

In this case, however, I decided to take a closer look simply because so many millions of owners, workers, and customers have been treated so brutally in the “War on Restaurants.”

END_OF_DOCUMENT_TOKEN_TO_BE_REPLACED

Restaurants are a canary in the coal mine for the US economy. From Wolf Richter at wolfstreet.com:

On Friday, September 30, Restaurants Acquisitions, the operator of Black-eyed Pea and Dixie House restaurant chains, converted its Chapter 11 filing to Chapter 7 liquidation. The bankruptcy court order noted the company had shuttered its restaurants and management had resigned.

The day before, Cosi Inc., a fast-casual chain with 1,100 employees filed for bankruptcy. It closed 29 of its 74 company-owned restaurants and laid off 450 people. The 31 independently owned franchise operations continue operating.

Also last week, Logan’s Roadhouse, a casual steakhouse with over 200 locations, closed more than 10 restaurants, on top of the locations it had already closed in August when it filed for Chapter 11 bankruptcy.

Restaurants are precarious creatures. They lease costly space and have to invest in equipment and furnishings. It’s a competitive environment, with high expenses and little pricing power. To expand, they load up on debts. Some, like Cosi, always lose money. Customers are finicky and fickle. When new competitors come along, or when the economy tightens, customers thin out and creditors begin to fret and turn off the money spigot.

Some of that is normal. The restaurants come along, and old ones die.

“But the current wave of bankruptcies is definitely unusual, and rivals the chain bankruptcy wave of 2009 and 2010, when several chains filed for debt protection after sales fell,” writes Jonathan Maze at Nation’s Restaurant News, adding:

In this case, the wave of bankruptcies is largely due to a decline in sales at restaurant chains that is particularly harmful to companies that are already walking a balance-sheet tightrope. The companies that filed for bankruptcy recently were already weak.

Some are repeat offenders, including Buffets LLC (Old Country Buffet, HomeTown Buffet, and Ryan’s) which is now mired in its third bankruptcy. Many of them, battered by declining sales and rising expenses, have been losing money for a long time. But now things are coming to a head.

Restaurant bonds moved into fourth place early this year in Standard & Poor’s Distress Ratio, behind brick-and-mortar retailers and the doom-and-gloom categories of “Energy” and “Metals, Mining, and Steel.”

Other restaurants are trying to hang on by cutting costs and shrinking their footprint, which entails more sales declines, and thus continues the downward spiral.

In August, casual-dining operator Ruby Tuesday announced that – after “a rigorous unit-level analysis of sales, cash flows, and other key performance metrics, as well as site location, market positioning and lease status” – it would sell its headquarters and close 15% of its 624 or so company-owned restaurants by September.

Clinton Coleman, interim CEO of Rave Restaurant Group, which operates Pie Five Pizza Co. and the Pizza Inn buffet brand, put it this way on September 23, after reporting that same-store sales had tumbled in Q4 and that losses had ballooned: “Sales trends in the fourth quarter were very challenging for the Pie Five system, as was the case in much of the fast-casual segment.”

The restaurant industry is not a sideshow. About 14 million people work in it, according to the National Restaurant Association. With $710 billion in annual sales, it’s an important part of consumer spending and accounts for about 4% of GDP. If the industry is having problems, it’s a red flag for the overall economy.