According to Tommy Robinson, he was treated like shit, in some instances literally, while he was in prison. From Jon Hall at fmshooter.com:

On an interview with Tucker Carlson last week, activist Tommy Robinson exposed the sordid details of his imprisonment to British authorities.

In May, Robinson reported outside of a court room where men of migrant-backgrounds were on trial for sexual grooming related offenses. Robinson read out information about their identities and the charges the men faced whilst livestreaming.

Notably, Robinson explained to Carlson that all of the information he read about the men had been from a BBC report that was public knowledge.

However, Robinson was arrested for allegedly breaching the peace. Being brought before a judge, Robinson was held on contempt of court due to the grooming trial being subject to supposed “reporting restrictions”.

Consider it for a second – something like this happened in a so-called free country – with a man imprisoned merely for reading a BBC article in public while holding the wrong thoughts.

Speaking with Tucker, Robinson – a vocal critic of Islam – revealed that during his time in prison, he was placed opposite the prison mosque and had even been diagnosed with Post-Traumatic Stress Disorder.

Robinson was then placed in solitary confinement for 23 and a half hours a day, given only 30 minutes of walking around a small cage for recreation. Robinson said that the threat to his safety after moving prisons was used to justify putting him in confinement.

Robinson detailed that he had lost forty pounds while in prison, given only a tin of tuna and a piece of fruit to eat for his daily consumption.

Being placed in a cell opposite the prison mosque and being forced to block and close his window to stop spit and excrement from being pushed through by other inmates, Robinson relayed the experience to Tucker:

I was supposed to be in Her Majesty’s Prison Service, not Guantanamo Bay… My prison cell that I was put in was on the ground level… and the mosque for the prison was directly opposite my cell. We… had two huge heat waves… I was literally drenched [because] I had excrement and spit put through my window… and in the end, I had to block up all of my cell windows.

Tommy Robinson is out of prison, but he’s by no means free and clear. From Tyler Durden at zerohedge.com:

Tommy Robinson,  the founder of the English Defence League, will be freed from prison after the court of appeal ordered that he should be retried on a contempt of court charge. He has been held at Onley prison after being jailed for 13 months following convictions for breaching reporting restrictions after broadcasting footage of trial defendants on social media.

Robinson was jailed in May after he filmed people involved in a criminal trial and broadcast the footage on social media. The footage, lasting about an hour, was watched 250,000 times within hours of being posted on Facebook. The controversial activist was sentenced to 10 months in prison for contempt of court, which he admitted, and a further three months for breaching a previous suspended sentence.

Fast forward to today, when at the court of appeal on Wednesday, the lord chief justice, Lord Burnett of Maldon, upheld the conviction but said there should be a retrial for the Leeds case, the Guardian reported.

In the ruling, the lord chief justice said the Leeds finding of contempt had been “flawed”. That court should not have proceeded immediately but waited to hear the case on a “fully informed basis”, he said.

The judgment added: “It was unclear what conduct was said to comprise a breach of that order and the appellant was sentenced on the basis of conduct which fell outside the scope of that order.”

Robinson was also ordered to stay at least 400 metres away from Leeds crown court while on bail.

Outside the Royal Courts of Justice, supporters of Robinson and anti-racism protesters chanted rival slogans at each other separated by crowd barriers and police. Members of Stand Up To Racism shouted: “Say it loud, say it clear, refugees are welcome here,” and “Nazi scum”.

Supporters of Robinson shouted back: “You’re the racists”, and “Tommy is free”.

Tommy Robinson is in prison but not forgottten. From Jack Montgomery at breitbart.com:

Massive crowds turned out in London on Saturday to rally for free speech and hear Dutch firebrand Geert Wilders demand the release of Tommy Robinson from prison.

“It’s so good to see so many of you here today, you are all heroes for being here today,” said the Freedom Party leader, an outspoken critic of radical Islam who rose to second place in the Dutch national elections last year.

Wilders told the crowd he had come to Britain to tell Robinson’s supporters they “will never walk alone” and to “tell the world, and the UK government in particular: Free Tommy Robinson!”

“At this very moment, thousands of people all over the world are demonstrating in front of British embassies, from LA to Sydney, and over half a million people have already signed the petition for Tommy,” he told the crowd.

“And all with the one important message: Free Tommy!

“Listen to us, all you in power: we want the release of Tommy Robinson!

“And that is more than we can say for all those people that govern us. Because our governors sold us out with mass immigration, with Islamisation, with open borders. We are almost foreigners in our own land,” he declared.

“And if we complain about it, they call us racists or Islamophobes — but I say, no more. And what do you say?” Wilders asked the assembled crowds.

“No more!” they shouted back.

Disturbing as Tommy Robinson’s arrest and imprisonment were, that he upset a status quo that would rather not confront child abduction and abuse, at least when Islamic immigrants are doing it, may be even more disturbing. From Douglas Murray at nationalreview.com:

The latest controversy is maddening for many reasons.

Tommy Robinson is a British political activist and “citizen journalist” who came to prominence in Britain almost a decade ago when he founded the English Defence League. The EDL was a street-protest movement in Britain whose aims could probably best be summarized as “anti-Islamization.” It emerged in the town of Luton after a group of local Islamists barracked the homecoming parade of a local regiment returning from service in Afghanistan.

From their earliest protests the EDL’s members sought to highlight issues including sharia law, Islam’s attitudes toward minorities, and the phenomenon that would become euphemistically known as “grooming gangs.” In reality these protests often descended into hooliganism and low-level violence (naturally helped along by self-described “anti-fascists”). The authorities did everything they could to stop the EDL, and the media did everything possible to demonize them. In a foretaste of things to come, very few people made any effort to understand them. And nobody paid any price for (indeed many people benefited from) claiming that the EDL was simply a fascist organization and that anybody who even tried to understand them must be a fascist too. The usual prohibition against sweeping generalizations doesn’t seem to apply if the generalization tilts in that direction.

I interviewed Tommy Robinson five years ago, after he had left the EDL (having by his own admission failed to keep extremists including actual neo-Nazis away from the movement). As he said then, one of the problems of everyone insisting that a particular movement is campaigning for the Fourth Reich is that the few people who think that sounds like a great idea will show up. Whatever his other faults, there is no evidence that Robinson thinks that way. Indeed he was once charged with assault for head-butting a Nazi sympathizer who wouldn’t leave an EDL protest. Not many people bothered with those details. The assault got reported, but not the cause. So the fact that Robinson had head-butted a Nazi became yet more evidence that he himself must be some kind of Nazi.

Clown Country, by The Zman

The US was the parent who never let its European children grow up. From the Zman at theburningplatform.com:

John Derbyshire often says that his home country is lost. That it is far past the point of reforming itself and becoming anything like its original self. That’s probably true, but not because it has imported a Muslim ruling class. If the Brits shut off that spigot today, they remain no worse than 80% white, assuming current fertility rates. If they could muster a little national pride, they could easily get back to 90% and relegate the Muslim hordes to a despised minority status, something like the Irish travelers or the Welsh.

That’s not going to happen without a revolution, one that results in the wiping out of the British ruling class. The public is clearly turning against the lunacy of the prevailing orthodoxy, but they are saddled with a generation of lunatics, who remain firmly in charge of the institutions. The whole Tommy Robinson affair makes the point. In a country with a sane ruling elite, there would be no need to a Tommy Robinson and his situation would never happen. But, the British ruling class is full of crazy people worried about nonsense.

Too few women and people from ethnic minority groups cycle in London and more must be done to promote diversity among a largely white, male and middle class biking community, the city’s walking and cycling commissioner has said.

Grand schemes, such as the Cycle Superhighway network of partially-segregated routes linking the suburbs with the centre, are too often perceived as simply a way of getting “middle-aged men cycling faster around the city”, Will Norman acknowledged.

He said he was considering setting diversity targets for London’s cycling population to ensure progress was achieved.

Black, Asian and minority ethnic groups account for about 15 per cent of the city’s cycle trips – around two-thirds less than Transport for London estimates it could be.

Speaking to The Independent, Mr Norman, whose job it is to deliver on Sadiq Khan’s pledge to make walking and cycling safer and easier in the capital, said: “There is a problem with cycling and the way it is perceived of getting middle-aged men cycling faster around the city, which is not the objective at all.

“It touches on something which is a real challenge for London cycling, which is diversity.” 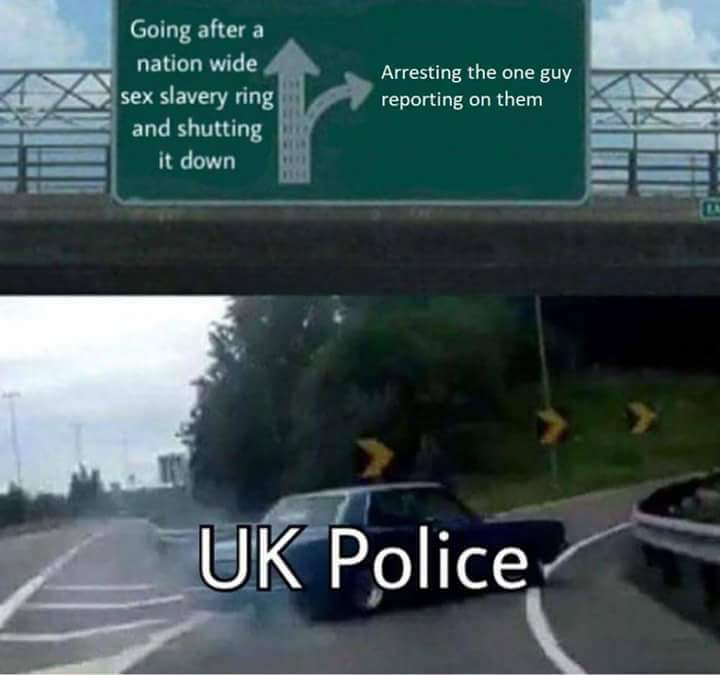 Tommy Robinson was silenced and those who would report and comment on his silencing were silenced, in a once great nation sliding downhill quickly. From Bruce Bawer at gatestoneinstitute.org:

First the good news: on Wednesday, at about noon London time, Tommy Robinson’s former lawyer, Helen Gower, reported on Twitter that “Tommy has just rung me and is well.” He had been receiving e-mails of support and was humbled by them. “He did inform me of some of the things that happened on Friday,” Gower wrote, “but I don’t want to put anything out and I will leave that to his Solicitor.”

Well, there it stands: the media gag order on the Tommy Robinson case has been lifted, but Robinson himself remains in Hull Prison, having been arrested on the street in Leeds, hauled into a kangaroo court, and then sent off to jail. Incidentally, in a YouTube video, Canadian activist Lauren Southern and a member of Robinson’s team have provided a plausible explanation of why the charge against Robinson declared by the police at the time of arrest, “breach of peace,” was changed to “contempt of court.” Apparently, the former offense would not constitute a violation of the terms of Robinson’s suspended sentence from last year and thereby justify immediate imprisonment. But by declaring Robinson guilty of “contempt of court,” the judge was able to ship him straightaway to prison.