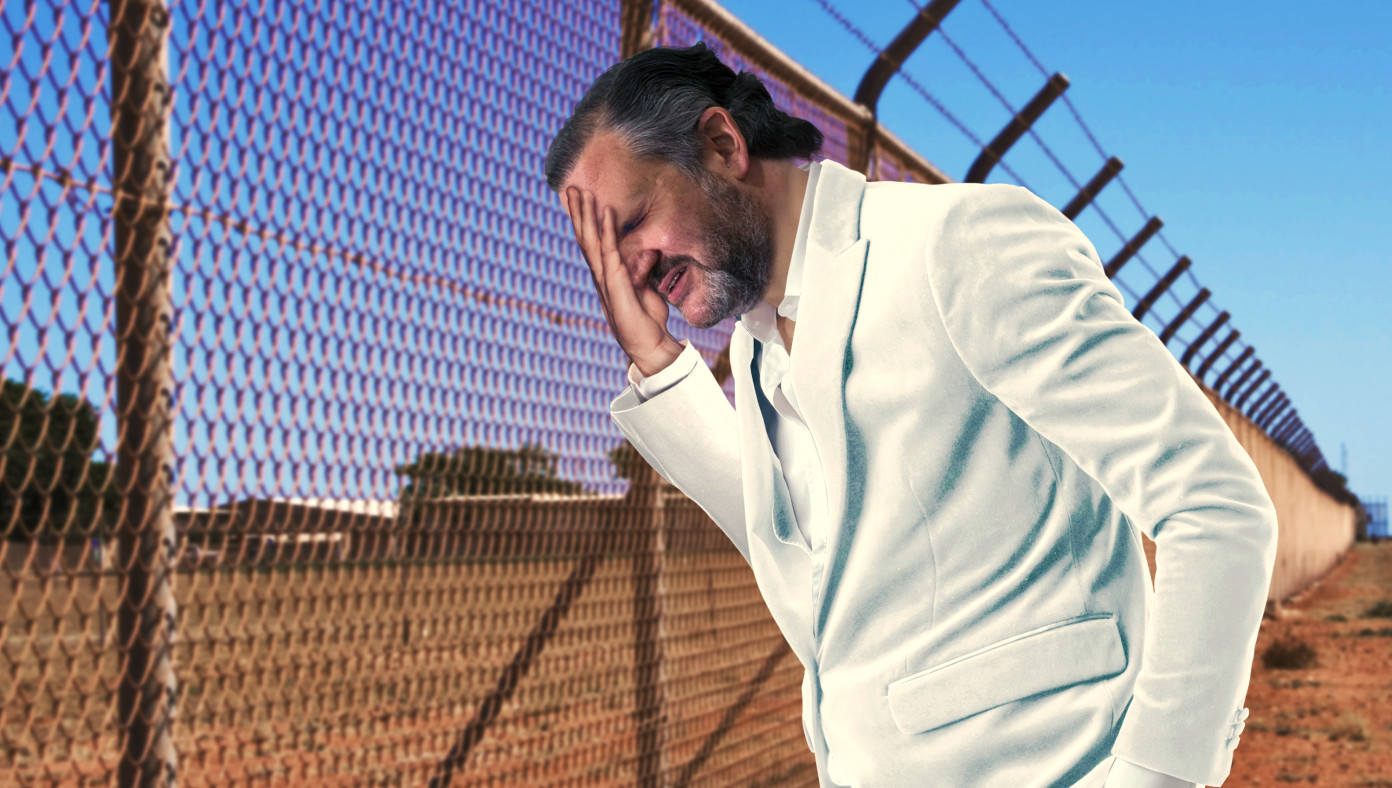 DONNA, TX—After disturbing pictures were released of conditions inside migrant detention facilities on the border, Senator Ted Cruz donned a bright white suit and visited the border with a camera crew to weep bitterly outside the chain-link fence.

“I’m here to see what’s really going on down here,” said Cruz, tears streaming down his face. “It’s even worse than I thought. These are literal concentration camps. The president is literally Hitler. I can’t believe this is happening in America.”

Cruz then doubled over, overcome with grief as camera flashes went off.

“WHHHYYYYYYYY? Oh, the humanity!” he cried, screaming toward the sky.

The Texas senator then posted the photos on social media so the world could share in his righteous indignation. Unfortunately, Twitter and Facebook suspended his account for taking unauthorized photos of a federal facility.

I can’t believe it: I agree with AOC, by Simon Black

Once in while even AOC gets it right (but even a stopped clock is right twice a day). From Simon Black at sovereignman.com:

Since the beginning of March, the US federal government has spent more than $5 trillion battling the Coronavirus and the effects of COVID-19. And governments around the world, from Europe to China, have spent trillions more.

And that amount doesn’t even begin to scratch the surface of the long-term economic toll, including then incalculable cost of shutting down the economy.

Government-imposed lockdowns have wiped out trillions of dollars, pushing businesses to failure and costing millions of jobs.

Unsurprisingly, debt levels have spiraled out of control.

We’re supposed to cancel everything, avoid friends and family, pepper spray anyone who isn’t wearing a mask, and cower in fear in our homes… all because of a virus that, by one recent estimate in the European Journal of Epidemiology, has a survival rate of 99.9%.

But even still, they’re back at it. More lock downs, more endless spending, more debt.

The United States Congress just passed yet another ‘Covid relief’ bill. Technically it includes general spending provisions for Fiscal Year 2021 (to avoid yet another government shut down).

AOC: ‘Most Crime Is Probably Just Some Street Rat With A Heart Of Gold Stealing Apples To Feed His Pet Monkey’

WASHINGTON, D.C.—Confronted with rising crime in New York City, Alexandria Ocasio-Cortez claimed that most crime in the area is probably “just some street rat with a heart of gold stealing apples to feed his pet monkey.”

She made the claim at a press conference today after reporters asked her about the city’s concerning spike in crime. She thought for a minute and adjusted her glasses before responding.

“You know, we think of crime as being, like, these evil criminals who steal puppies to make coats out of them,” she said. “Like they’re just these cruel, evil people who want dog coats.”

“Isn’t that just the plot of 101 Dalmations?” one reporter asked. Ocasio-Cortez fired back, though, accusing her of racism.

“Anyway, but that’s not how they are. Criminals just want to take some bread and give it to an orphan, or take a few apples for their pet monkey to eat. And maybe they want to give some to a princess who is oppressed by the patriarchal hierarchy and just wants some time alone at the market. You never know.”

“Isn’t that just the plot of Aladdin?” another reporter asked. Ocasio-Cortez fired back, though, accusing him of sexism.

One reporter then asked her what she thought about the idea that all criminals are just riff-raff. “Riff-raff? Street rat? I don’t buy that,” she said. “If only we’d look closer, we’d see that there’s so much more to them.” She then accused him of classism.

Trump is dividing and hopes to conquer the Democrats next year. From Patrick J. Buchanan at buchanan.org:

President Donald Trump’s playground taunt Sunday that “the Squad” of four new radical liberal House Democrats, all women of color, should “go back and help fix the totally broken and crime-infested places from which they came,” dominated Monday morning’s headlines.

Yet those headlines smothered the deeper story.

The Democrats are today using language to describe their own leaders that is similar to the language of the 1960s radicals who denounced Democratic segregationist governors like Ross Barnett and George Wallace.

Consider what the four women have been saying.

Alexandria Ocasio-Cortez has accused Speaker Nancy Pelosi of attacking “newly elected women of color.” Was she calling Pelosi a “racist”?

“No!” protested AOC. But it sure sounded like it.

AOC’s chief of staff Saikat Chakrabarti attacked Native American Rep. Sharice Davids for her vote on a Pelosi-backed bill that sent $4.6 billion in aid to the border but lacked the restrictions on Trump policies progressives had demanded.

END_OF_DOCUMENT_TOKEN_TO_BE_REPLACED

Trump is going to drive a wedge a mile wide into a Democratic party that is already fissuring. From Raúl Ilargi Meijer at theautomaticearth.com:

“Don’t Take The Bait”, said 4 young congresswomen yesterday in a press conference in Washington DC. They were referring to comments Donald Trump had made about them earlier. However, just the simple act of calling the press conference meant they were … taking the bait.

Yes, Trump was out of line, way out of left field territory out of line. But he did that on purpose, and Ilhan Omar of Minnesota, Alexandria Ocasio-Cortez of New York, Rashida Tlaib of Michigan and Ayanna Pressley of Massachusetts, were voluntarily following him into that same left field.

I’ve been saying for over 3 years now that the role of Trump is to expose the -inherent and longtime- failures of the US political system. But when I see things like that press-op, how can I possibly think the system has learned anything at all?

If Trump’s role is to reveal the failures of the system, and that same system turns around and blames Donald Trump for all of those failures, how are we ever supposed to take the next step out of here?

Trump has been especially vicious against the 4 women, and it’s simply not enough to put that down to his racism or anything like that. There’s something else going on; how obvious would you like it?

What is happening here is not Trump pandering or virtue-signalling to his base -that’s just an added feature. The reality is that Trump, in say (re-)election mode, sees a divide within the Democratic party, drives a wedge into that divide, and twists it.

His strong if not vicious attacks on the 4 women are aimed straight at Nancy Pelosi, Chuck Schumer and Joe Biden, plus all the rest of the centrist Dems. Trump is calling them out. So they will have to either end up supporting AOC and co, or they will not.

END_OF_DOCUMENT_TOKEN_TO_BE_REPLACED

It’s despicable when politicians use pictures of dead children to score political points. From Raúl Ilargi Meijer at theautomaticearth.com:

Any image of a dead child is always harrowing, for everyone but the most deranged psychopaths among us. If the child has drowned while seeking a better life it is possibly worse. The public reaction of politicians to such images, which varies from doing very little, or nothing, to solve the issues that have led to a child drowning, to trying to make cheap political gains from the image, must be the worst.

On September 2 2015, this photo of Syrian Kurdish 2 year-old Alan Kurdi, lifeless on a beach near Bodrum, Turkey, went viral. Almost 4 years later, all Europe has done is try to hide the problems that led to his death, by handing Turkey billions of euros to keep refugees inside that country. And still today conditions in Lesbos, Greece are appalling. Hardly a thing has changed.

Improvements to the situation that lead to Alan Kurdi’s death, within Syria itself, have had very little to do with European efforts. Russia had a much bigger role in that. And Syria is not the only source, or place, of troubles and refugees. Libya has turned into an open air slave market thanks to US and EU “efforts” under Obama. And Iraq is not exactly a land of milk and honey either. Or Afghanistan.

And then this week another picture of a drowned child made the frontpages -and more. That child, too, drowned due to a situation that has a long history: the US seeking to turn Central America into a dirt-poor, chaotic and unsafe environment that local people desperately want to escape. Same difference. And again, in the US and EU it is used as propaganda material.

Ocasio-Cortez Disappointed To Learn The ‘Free Market’ Isn’t A Grocery Store Where You Don’t Have To Pay For Anything, from The Babylon Bee

WASHINGTON, D.C.—Representative Alexandria Ocasio-Cortez has struggled to get by on her new six-figure salary, given the high cost of living in her luxurious Washington, D.C. crib.
So when she heard in passing that the United States has a “free market” economy, she was ecstatic. She immediately set out in an Uber to try to find one of the free markets, assuming they were grocery stores where you don’t have to pay for anything.

“I’m really, like really excited,” she said on a live Instagram video. “I thought the U.S. was all about oppressive capitalistic systems of inequality, but when I heard about these free markets, I realized we were in better shape than I had thought.”

However, after her Uber had driven her all over the city for several hours, she hadn’t found a single free market anywhere and had to settle for going to some stores where people are free to buy, sell, and exchange goods and services with one another.

“This is basically Nazi Germany,” she said. “All these people spending money they earned doing work to buy things of their own free will? Without the government allocating resources as they see fit?”

AOC and the Moron Mob, by Robert Ringer

Don’t underestimate the moron bloc, whose numbers are steadily growing. From Robert Ringer at lewrockwell.com:

An acquaintance of mine recently asked me if I took media darling Alexandria Ocasio-Cortez seriously?  Without hesitation, I answered in the affirmative.  Let me explain why.

In full disclosure, I admit I have a soft spot for AOC.  She’s an adorable little girl with sparkling eyes and boundless energy.  Sure, she’s undeniably a moron, but a pleasant moron.  I can’t help it, I just like pleasant people, even if they’re a little short on intellect.

What’s most remarkable about AOC is that she does something Radical Leftists almost never do:  smile!  And not just any old smile.  Hers is the kind of smile that lights up a room and makes everyone around her feel good.

More full disclosure:  AOC reminds me of a Puerto Rican girl in New York City who I dated in my mid-twenties.  She, too, sported an infectious smile, and her enthusiasm was always in high gear.