Are Justices Kavanaugh and Barrett feeling the threat of expansion?

Are Kavanaugh, Barrett, and Roberts trimming their sails because they’re afraid of Democratic court-packing schemes? From technofog at technofog.substack.com:

Questioning their lack of fortitude.

He provides as an example the case of Fulton v. City of Philadelphia, in which the Court was presented with the question of whether the City of Philadelphia violated the First Amendment after it stopped referring foster children to a Catholic foster care agency after the agency “would not certify same-sex couples to be foster parents due to its religious beliefs about marriage.”

Justices Thomas, Alito, and Gorsuch were ready to overturn Supreme Court arguably incorrect precedent (dating back to 1990) that “the First Amendment’s Free Exercise Clause tolerates any rule that categorically prohibits or commands specified conduct so long as it does not target religious practice.”

Justices Kavanaugh and Barrett weren’t willing to take that step. (In its February 2021 decision, the Supreme Court held the City of Philadelphia violated the Free Exercise Clause of the First Amendment but the Court did not go far enough for religious freedom advocates.)

Justice Gorsuch, in his concurring opinion, called out the Court’s lack of courage:

“Dodging the question today guarantees These cases will keep coming until the Court musters the fortitude to supply an answer.”

Blackman notes this “personal attack no doubt reflects simmering tensions within the Court.”

He also observes how Justices Barrett and Kavanaugh (contrary to Thomas and Gorsuch and Alito) argued that California’s singing ban on churches could remain in place during the COVID pandemic. Barrett “thus used her first separate writing on the Court to rule against people of faith.”

Women should be believed when they allege sexual misconduct, at least if the woman is Christine Blasey Ford and she’s accusing a Republican president’s Supreme Court nomination. Women should not be believed, especially if they are accusing the Democratic party’s presumed presidential nominee. Never mind that the accuser, Tara Reade, has a much more substantial case than Ford did. From Tyler Durden at zerohedge.com:

With Joe Biden facing a sexual assault accusation from a former staffer who not only remembers the date, location, and who she told – and that there was penetration, Democrats who condemned Supreme Court Justice Brett Kavanaugh over allegations which were devoid of the same level of specificity have come under fire for their utter silence, or defense, of Biden. 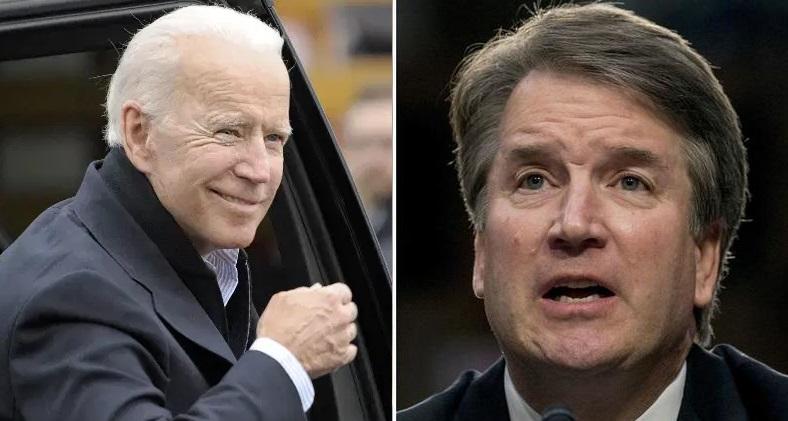 Both Biden and Kavanaugh have faced decades-old charges that first became public at critical junctures in their pursuit of high political office.

Top Democrats who were on the front lines demanding justice for Christine Blasey Ford during the Kavanaugh hearings have rushed to defend Biden, saying they do not believe the allegations made against him by Tara Reade.

And while the news media printed salacious new allegations against Kavanaugh before vetting the accusers or their claims, media outlets have approached Reade’s allegations with extreme caution. –The Hill

Indeed, the standard of “believe all women” set by Democrats themselves has been utterly abandoned, highlighting what a giant virtue signal it was in the first place.

I Was A Never Trumper Until Democrats Went Gonzo On Kavanaugh. Now, Hand Me That Red Hat, by Nathanael Blake

It looks like the Democrats’ Christine Blasey Ford ploy is changing minds, but not in they direction they had hoped. From Nathanael Blake at thefederalist.com:

Is it too late to get one of those red hats?

I didn’t support Donald Trump during the 2016 election — not that it mattered. I wasn’t in a swing state and I wasn’t publicly opining about the general election. Had my vote mattered, I might have brought myself to vote for him, but it didn’t, so I didn’t.

On election night, I had a few drinks and enjoyed Hillary Clinton losing. It was a spectacle at which, to borrow a line, it would have taken a heart of stone not to laugh. I did text a friend or two that I hoped I was wrong about Trump.

In some ways, I was. He has kept his promises on judges, for instance. In other ways I think my low opinion of him has been thoroughly vindicated. Thus, in writing for The Federalist, I have defended President Trump and criticized him, sometimes in the same column.

END_OF_DOCUMENT_TOKEN_TO_BE_REPLACED

One Ford Narrative Too Many, by Victor Davis Hansen

Ford’s narrative collapsed because it changed, she remembered few of the important details, and she had no outside corroboration. From Victor Davis Hansen at amgreatness.com:

In the end, the Christine Blasey Ford accusations collapsed. With them went the last effort to destroy Brett Kavanaugh’s nomination to the United States Supreme Court.

After thousands of hours of internal Senate and FBI investigations of Kavanaugh, as well as public discussions, open questioning, and media sensationalism, Ford remained unable to identify a single witness who might substantiate any of her narratives of an alleged sexual assault of nearly four decades past.

To substantiate her claim, the country was asked to jettison the idea of innocent until proven guilty, the need for corroborating testimony, witnesses, and physical evidence, the inadmissibility of hearsay, the need for reasonable statutes of limitations, considerations of motive, and the right of the accused to conduct vigorous cross-examination. That leap proved too much, especially when located in a larger progressive landscape of street theater antics, including Senate disruptions, walkouts, and sandbagging senators in hallways and elevators.

END_OF_DOCUMENT_TOKEN_TO_BE_REPLACED

Many Americans just don’t buy the assertion that a victim of an alleged sexual should be believed and a man denied a position on the Supreme Court without corroborating evidence. From Heather Higgins at thehill.com:

Democrats were cheered by the renewed FBI investigation of Judge Brett Kavanaugh and counted it as a win. Most Republicans were dismayed that the full Senate’s vote on Judge Brett Kavanaugh’s appointment to the Supreme Court was delayed and saw this as a political misstep.

They should change places.

First, while the politically attuned understand this is just a delay game by the left, who are on record as willing to do anything to derail this nominee and force the appointment to be made after the November election, swing voters and many women do not.

END_OF_DOCUMENT_TOKEN_TO_BE_REPLACED

The Damage Done by the Kavanaugh Hearings, by Alice Salles

“Believing all women,” by abandoning the presumption of innocence and the necessity of proof, lowers the bar for women. As we’ve seen, whenever the bar is lowered for a favored group, it ends up hurting that group. From Alice Salles at mises.org:

As Gallup reports that more Americans expressed support for Supreme Court nominee Brett Kavanaugh during the week he denied being guilty of sexual assault, it’s clear that whether accuser Dr. Christine Blasey Ford is speaking the truth, the public might not be ready to accept the allegations without evidence. But if you were to rely solely on most news outlets , you would think Kavanaugh had been charged and convicted.

While the outspread concern over a Supreme Court nominee is warranted , mainly due to the power justices have over our lives, the conversation was never about how Kavanaugh saw the PATRIOT Act as “measured, careful, responsible, and constitutional,” despite the law’s mockery of the Fourth and Fifth Amendments. Democrats also never bothered to mention Kavanaugh once ruled that “the Government’s metadata collection program is entirely consistent with the Fourth Amendment” while sitting in the U.S. Court of Appeals for the D.C. Circuit. Before the allegations of sexual assault, all they seemed to worry about was how Kavanaugh would rule on an abortion case, apparently frightened that states would have to pick up where they left off before Roe v. Wade. But ever since Ford entered the picture, offering a compelling story of assault but also one with gaps and no evidence , the focus is back on one thing and one thing only: We must believe all women, no matter what.

END_OF_DOCUMENT_TOKEN_TO_BE_REPLACED

A political victory only, not a stand on principle.

No lion, tiger, bear, or wolf would, if it could choose, give up its claws or fangs. No poisonous snake or spider would surrender its venom. Only humans voluntarily abandon their means of survival.

Reason is humans’ tool of survival and separates them from the other animals. The Oxford Dictionary defines reason as: “the power of the mind to think, understand, and form judgments by a process of logic.” Ayn Rand had it right when she warned that reason was under sustained attack. It has only intensified since her death in 1982.

Anybody can accuse anybody of committing a crime. The longstanding legal presumption is that the accused is innocent until proven guilty. Given a guilty judgment’s consequences, the burden necessarily falls on accusers to prove guilt. If it did not, mere accusation would be a verdict leading to punishment of the accused, or Salem Witch Trial justice.

END_OF_DOCUMENT_TOKEN_TO_BE_REPLACED

The Democrats have shot themselves in both feet. From Tom Luongo at tomluongo.me:

Yesterday’s dramatic cloture vote to push SCOTUS nominee Brett Kavanaugh to a final confirmation vote is one of those political moments of pure victory.  It was messy and it was tense, but the ultimate outcome was better than I could have ever originally expected.

Because it’s pretty clear to me that we’re looking at the kind of big operation run on the Democrats and the Soros Group to expose not only their tactics, the classic “Nuts and Sluts” shaming technique, but also in the process crush certain powerful members of the Democratic party which have been the conduit through which ‘the Resistance’ has driven our political process to the point of no return.

END_OF_DOCUMENT_TOKEN_TO_BE_REPLACED

The ACLU could plausibly have opposed Brett Kavanaugh on the grounds that he’s weak on civil liberties. Instead, it argued that the presumption of innocence should be thrown out, Ford believed, and Kavanaugh rejected. From Alan M. Dershowitz at gatestoneinstitute.org:

Now that Brett Kavanaugh has been confirmed, it is appropriate to look at the damage caused by the highly partisan confirmation process. Among the casualties has been an organization I have long admired.

END_OF_DOCUMENT_TOKEN_TO_BE_REPLACED

Doug Casey doesn’t like Brett Kavanaugh, but not for anything he did as a 17-year-old. From Casey at caseyresearch.com:

I’m of course talking about the Brett Kavanaugh scandal. Now, I realize you might be sick of hearing about this. But I guarantee you haven’t heard anyone speak as unapologetically on this topic as you’re about to…

Justin: Doug, what do you make of the media circus surrounding Kavanaugh?

Doug: Disgusting and degrading. First of all, nobody knows who’s lying. My gut feeling? Christine Ford is either lying or deluded. The other accusers are shameless publicity seekers, at best.

How can any reasonable person even dream of bringing up what may or may not have happened at an alcohol-fueled party 36 years ago? The supposed witnesses can provide zero relevant corroboration. Her testimony, outside discussions and records, were inconsistent. Her sham fear of flying says she had serious second thoughts. Her timing in making the accusation at the last minute is highly suspicious. Especially when she doesn’t remember who invited her, where the party was, when it was, how she got there, how she got home from the party (she was too young to drive), or any other common sense, practical details.