Julian Assange Is Being Tortured To Death, by Mac Slavo

While the world’s attention is directed elsewhere, Julian Assange is dying at the hands of the British and US governments. From Mac Slavo at shtfplan.com:

A very “sedated” Julian Assange told a friend that he’s dying on Christmas Eve. Because of Assange’s condition during the phone call, concerns about his health have mounted.  His suffering amounts to torture at the hands of government.

Assange’s “crime” was publishing the truth.  He gathered information, none of which was fabricated or fake and published what the government is doing to other countries and the lengths that they’ll go to enslave the masses.  For that “crime”, Assange is being tortured in what can be summed up as a Gulag.   The powers that shouldn’t be don’t want someone who knows the truth to live to tell it, and that’s become painfully obvious.

American Gulag Death Of Jeffrey Epstein: Will Julian Assange Be Next?

END_OF_DOCUMENT_TOKEN_TO_BE_REPLACED

100+ Doctors Demand Julian Assange Receive Safe Passage to Australian Hospital ‘Before It Is Too Late, by Andrea Germanos

Somebody’s speaking up now that Julian Assange has one foot in the grave. From Andrea Germanos at commondreams.org:

“That we, as doctors, feel ethically compelled to hold governments to account on medical grounds speaks volumes about the gravity of the medical, ethical, and human rights travesties that are taking place.”

A group of over 100 doctors on Monday urged the Australian government to end its “refusal to act” in the case of Julian Assange and insist the British government release the WikiLeaks founder from prison so he can be safely sent to an Australian hospital before “it is too late.”

In an open letter addressed to Foreign Minister Marise Payne, the doctors say that “the most fundamental human rights of an Australian citizen are being denied by the British government.”

The international medical experts, who hail from countries including the United States, Australia, and the United Kingdom, called upon Payne to abide by his “undeniable legal obligation to protect your citizen against the abuse of his fundamental human rights, stemming from U.S. efforts to extradite Mr. Assange for journalism and publishing that exposed U.S. war crimes.”

Assange has been in London’s Belmarsh prison since April for skipping bail seven years ago when he first took refuge at the Ecuadorian Embassy in London. He’s facing possible extradition to the United States for alleged violations of the Espionage Act.  His time at the embassy and at Belmarsh had led to “medical neglect and fragile health,” the doctors said, adding that Assange continues to suffer psychological torture at the London jail.

It’s not the first time the medical group has sounded alarm on Assange’s deteriorating health conditions.

END_OF_DOCUMENT_TOKEN_TO_BE_REPLACED

Advancing Propaganda For Evil Agendas Is The Same As Perpetrating Them Yourself, by Caitlin Johnstone

After relentlessly trashing Julian Assange for years the UK’s Guardian now believes he shouldn’t be extradited to the US. It’s too little, too late. From Caitlin Johnstone at caitlinjohnstone.com:

The Guardian has published an editorial titled “The Guardian view on extraditing Julian Assange: don’t do it”, subtitled “The US case against the WikiLeaks founder is an assault on press freedom and the public’s right to know”. The publication’s editorial board argues that since the Swedish investigation has once again been dropped, the time is now to oppose US extradition for the WikiLeaks founder.

“Sweden’s decision to drop an investigation into a rape allegation against Julian Assange has both illuminated the situation of the WikiLeaks founder and made it more pressing,” the editorial board writes.

Oh okay, now the issue is illuminated and pressing. Not two months ago, when Assange’s ridiculous bail sentence ended and he was still kept in prison explicitly and exclusively because of the US extradition request. Not six months ago, when the US government slammed Assange with 17 charges under the Espionage Act for publishing the Chelsea Manning leaks. Not seven months ago, when Assange was forcibly pried from the Ecuadorian embassy and slapped with the US extradition request. Not any time between his April arrest and his taking political asylum seven years ago, which the Ecuadorian government explicitly granted him because it believed there was a credible threat of US extradition. Not nine years ago when WikiLeaks was warning that the US government was scheming to extradite Assange and prosecute him under the Espionage Act.

The British and US governments are killing Julian Assange in broad daylight and few people care. From Tyler Durden at zerohedge.com:

Pink Floyd frontman Roger Waters has been an outspoken advocate for Julian Assange, but the most recent sight of the reporter’s physical and mental health, at his recent court appearance, has Waters stepping up his criticism of the establishment’s slow-assassination of the exposer of US war crimes.

Referring to a UK judge’s decision on Monday to deny the WikiLeaks founder a delay in US extradition proceedings, Waters proclaimed:

“Orwell and Huxley were always arguing about who had the closest view of what dystopia might look like in the future… I think we got a lot of both.”

Assange Is The Only One To Abide By The Law, by Raúl Ilargi Meijer

The governments trying to convict Julian Assange of breaking the law and locking him away forever (if they don’t kill him first), have repeated broke their own laws. From Raúl Ilargi Meijer at theautomaticearth.com:

On October 21 2019, Brexit became an entirely irrelevant issue. Or perhaps we should say it had already become that, but on that date it was exposed for all to see that it was. The parading into a courtroom of Julian Assange in London was all the evidence one could need that the UK government breaks its own laws as well as numerous international laws, with impunity. But that is not how the media reported on it, if it did at all.

And so, the core issue behind Brexit, i.e. who makes Britain’s laws, turned to nothing. If your government breaks its own laws all the time, what does it matter where those laws are made? They are meaningless anyway. Whether they come from Brussels or London make no difference if the government and judicial system don’t abide by them. Those million men marches for a Final Say look totally ridiculous once that reality sinks in.

END_OF_DOCUMENT_TOKEN_TO_BE_REPLACED

Julian Assange will not have the attorney-client that is standard for criminal defendants under Anglo-American law. Of course, it’s the Anglos and the Americans who are trying to railroad Assange. From the Editors at consortiumnews.com:

The WikiLeaks legal team have a strong case to have Assange’s extradition request thrown out after the government that wants him extradited got hold of surveillance video of his privileged attorney-client conversations.

If this were a normal legal case, WikiLeaks’ lawyers would almost certainly be able to get the extradition request by the United States for their client Julian Assange thrown out on the grounds that his privileged conversations with his lawyers at Ecuador’s London embassy were secretly videotaped, and that the very nation that wants him extradited to stand trial in Virginia has obtained access to those videos. In a normal extradition case it would be hard to imagine Britain sending a suspect to a country whose government has already eavesdropped on that suspect’s defense preparations.

But this is not a normal legal case.

END_OF_DOCUMENT_TOKEN_TO_BE_REPLACED

Assange Behind Bars, by Felicity Ruby

This is what happens to true whistleblowers. From Felicity Ruby at arena.org.au:

A visit to Belmarsh maximum-security prison

have only ever known Julian Assange in detention. For nine years now, I have visited him in England bearing Australian news and solidarity. To Ellingham Hall I brought music and chocolate, to the Ecuadorian embassy I brought flannel shirts, Rake, Wizz Fizz and eucalyptus leaves, but to Belmarsh prison you can bring nothing—not a gift, not a book, not a piece of paper. Then I returned to Australia, a country so far away that has abandoned him in almost every respect.

Over the years I have learned to not ask, ‘How are you?’, because it’s bloody obvious how he is: detained, smeared, maligned, unfree, stuck—in ever-narrower, colder, darker and damper tunnels—pursued and punished for publishing. Over the years I’ve learned to not complain of the rain or remark on what a beautiful day it is, because he’s been inside for so long that a blizzard would be a blessing. I’ve also learned that it is not comforting but cruel to speak of sunsets, kookaburras, road trips; it’s not helpful to assure him that, like me and my dog, he will find animal tracks in the bush when he comes home, even though I think it almost every day.

END_OF_DOCUMENT_TOKEN_TO_BE_REPLACED

Julian Assange’s real “crime” is telling the truth about the American government. From Joe Lauria at consortiumnews.com:

The Swedish prosecuting authority announced at a Stockholm press conference Monday that Sweden would seek Assange’s extradition from Britain to face investigation on a nearly decade-old allegation of sexual assault. 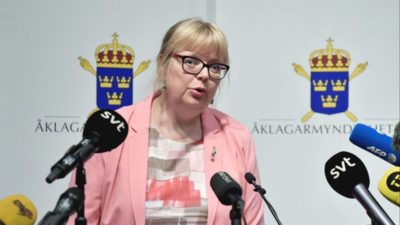 Assange is serving a 50-week sentence at Belmarsh prison in London for skipping bail in the rape case in 2012. Assange had lived inside the Ecuadorian embassy from June 2012 to April 11 this year, when Ecuador lifted his asylum and allowed British police to enter the embassy and arrest him.

On the same day the United States unveiled a sealed indictment accusing Assange of intrusion into a government computer. The U.S. also filed an extradition request for Assange.

Persson told a press conference in Stockholm on Monday that it would be up to British authorities to determine which extradition request—to Sweden or to the U.S.— would take precedence. She also said she wouldn’t speculate on an extradition request from the U.S. to Sweden since one had not yet been made.  The BBC reported that “the decision as to which of the two requests take precedence will be made by UK Home Secretary Sajid Javid. He would make his decision primarily on the basis of which alleged offence was considered to be more serious. Rape is likely to be considered more serious than conspiracy to commit computer intrusion. That would mean ordering Assange’s extradition to Sweden.”

Britain may take the opportunity to wash its hands of the politically thorny case of extraditing a publisher to the United States by sending him to Sweden instead, though Persson said Assange could not then be extradited to the U.S. from Sweden without Britain’s consent.