Greens Unlikely to Survive the Coming Winter, by Consciousness of Sheep

When Europe is cold and hungry this winter, the blame is likely to fall on the greens and their utopian energy fantasies. From The Consciousness of Sheep at consciousnessofsheep.co.uk:

For as long as climate change was off in the distant future, governments have been able to trade warm words for concrete action.  In a similar vein, a certain kind of green politician has been able to trade on the pretence that ending fossil fuel use would come at no cost.  Meanwhile, the diesel fuel kept the arteries of the global supply chains flowing even as ever more coal and gas supplied the heat and power for the technological engines of economic growth.  At the same time, the rest of us could signal our impotent virtue by recycling our glass, plastic and used clothes, happy in the pretence that they weren’t being shipped off to Asia to be incinerated or just dumped in the sea.

It all began to fall apart a couple of decades ago when western oligarchs, celebrities and the corporate technocracy started to drink the “green energy” Kool-Aid.  Governments began taking climate change just seriously enough to provide lavish corporate welfare subsidies to the energy industry to deploy large-scale wind and solar farms in the pretence that these would achieve something more than lining the pockets of corporate CEOs.  Soon enough, green politicians were sharing platforms with corporate technocrats to talk about “green growth,” while environmental activists gathered outside – not to challenge this blatant abuse of corporate welfare, but to call for even more… at any cost.

Why Food Prices Are Expected to Skyrocket, by Dr. Joseph Mercola

Famine looms in many parts of the world and the situation will get worse. From Dr. Joseph Mercola at theburningplatform.com:

As the sanctions backfire and the Ukraine-Russia war continues, expect food prices to go even higher. Some people are going to starve. From Sundance at theconservativetreehouse.com:

The UN Food and Agriculture Organization reported on Friday they are recording the highest Food Price Index since they started recording thirty years ago. With record highs in prices for cereals, vegetable oils, dairy and meats

This issue has been a slow burning fuse toward the biggest powder keg in modern history, and it is about to get very serious.  We have been warning about it since last fall {Go Deep}.  In the most deliberate and painstaking ways possible, we have been urging everyone to take this issue seriously.

The background cause is complex and started with the 2020 government response to the pandemic.  U.S. and international government intervention in the food supply process has been FUBAR from the beginning. Every action taken since early 2020 has been one bad policy after another; building failure upon failure, crisis upon crisis, bad decision upon bad decision, bringing us to a precipice summed up by saying “the absence of food will change things.”

Farmers on the Brink, by Doomberg

Ever-rising prices for essential farming inputs has created a crises for farmers, and will soon create one for anybody who eats. From Doomberg at doomberg.substack.com:

“Farming looks mighty easy when your plow is a pencil and you’re a thousand miles from the corn field.” – Dwight D. Eisenhower

It was a spooky time to be out at sea off the US East Coast on Halloween in 1991. A strong storm system over the maritime provinces in Canada merged with the remnants of Hurricane Grace, forming a new, epic, and dangerous Nor’easter. The winds of this new storm breached 70 miles per hour and a wave as high as 100 feet was measured off the coast of Nova Scotia, but the storm was not renamed as either a tropical storm or a hurricane – instead, it is known only colloquially as simply the Perfect Storm. Six fishermen from Massachusetts perished when their vessel Andrea Gail sunk in open waters, and the story of the storm and of that tragedy became the subject of a best-selling book and a blockbuster feature film.

While the concept of a perfect storm is often too casually assigned in popular culture, it is difficult to find a more apt description of what has been unfolding in the global agriculture markets over these past several months. The tempest caused by the European energy disaster has merged with the hurricane of consequences flowing from Russia’s invasion of Ukraine, forming the genesis of a generational crisis in food that will leave few unaffected. While we’ve been warning about just such a scenario for some time, after spending the past two weeks traveling across the US Midwest and conferring with our contacts in the agricultural sector, even we are a little spooked by what we’ve learned. In a financial crash, the correlation between all asset classes converges to one. The coming crash in global food supply will be driven by a similar phenomenon across virtually every input into farming – they are all spiking to historic highs simultaneously, supply availability is diminishing across the spectrum, and the time to reverse the worst of the upcoming consequences is rapidly running short.

US Still Pouring Massive Supply Of Weapons Into War-Torn Yemen, by Jason Ditz

Three years into the 2015 Saudi-led invasion of Yemen, untold thousands are dead. Northern Yemen has been through the worst cholera outbreak in human history, and civilians continue to die in bunches from Saudi airstrikes against the region.

To call Yemen war-torn is really putting it mildly. Yemen is in a disastrous state, with a Saudi-led naval blockade threatening to starve millions. If there’s one thing Yemen has no shortage of, however, it’s weapons, with the US  ensuring a massive supply continues to pour into the hands of Saudi and Emirati forces.

US arms sales are themselves at a record high during this war, in no small part because of purchases by the United Arab Emirates, and particularly by the Saudis, who are dropping US bombs on northern Yemen as fast as they can buy them.

And while bombs and warplanes are the big dollar amount of sales, they also include large numbers of US-made automatic rifles and small arms ammunition. The UAE is particular bought $60 million in small arms in 2016 alone, both for their own direct involvement in Yemen and to arm their allied factions on the ground. The Saudis bought another $11 million.

Yemen isn’t a place to send weaponry that you want well-documented and carefully tracked, either. The Pentagon has confirmed they can’t account for about $500 million more in weapons that they’d given to the Hadi government up to 2015.

So the Saudi and UAE-bought small arms are being sent to Yemen to replace those “lost” weapons, but it’s not as if those weapons literally disappeared. Rather, they’re just not in the hands of officials, or at least not in any above-board way. That’s virtually certain to be the fate of this new influx as well.

At the same time, US arms sales are ensuring that the Saudi and coalition warplanes never run out of bombs to drop, despite those airstrikes seemingly accomplishing nothing but killing more and more civilians in the Shi’ite-dominated north.

To continue reading: US Still Pouring Massive Supply Of Weapons Into War-Torn Yemen

The $1.5 Billion Campaign to Whitewash Genocide in Yemen, by Dan Glazerbrook

The Saudi Arabian government has to blockade and bombard Yemen because by most accounts its “fighting forces” can’t fight their way out of a paper bag. That strategy is a disaster for millions of sick, starving, and dying Yemenis. Great Britain and the US are supporting the Saudis, but don’t have the courage to admit what they’re doing. It goes the other way, they obfuscate their roles. From Dan Glazerbrook at counterpunch.org:

150,000 people are thought to have starved to death in Yemen last year, with one child dying of starvation or preventable diseases every ten minutes, and another falling into extreme malnutrition every two minutes. The country is undergoing the world’s biggest cholera epidemic since records began with over one million now having contracted the disease, and new a diptheria epidemic “is going to spread like wildfire” according to Lowcock. “Unless the situation changes,” he concluded, “we’re going to have the world’s worst humanitarian disaster for 50 years”.

The cause is well known: the Saudi-led coalition’s bombardment and blockade of the country, with the full support of the US and UK, has destroyed over 50% of the country’s healthcare infrastructure, targeted water desalination plants, decimated transport routes and choked off essential imports, whilst the government all this is supposed to reinstall has blocked salaries of public sector workersacross the majority of the country, leaving rubbish to go uncollected and sewage facilities to fall apart, and creating a public health crisis. A further eight million were cut off from clean water when the Saudi-led coalition blocked all fuel imports last November, forcing pumping stations to close. Oxfam’s country director in Yemen, Shane Stevenson, commented at the time that “The people of Yemen are already being starved to submission – unless the blockade is lifted quickly they will have their clean water taken away too. Taking clean water from millions of people in a country that is already suffering the world’s largest cholera outbreak and on the verge of famine would be an act of utmost barbarity.”

To continue reading: The $1.5 Billion Campaign to Whitewash Genocide in Yemen

Millions Face Starvation in Yemen Due to Saudi Arabia’s Blockade, by Michael Krieger

Saudi Arabia is strangling Yemen and the US is helping. From Michael Krieger at libertyblitzkrieg.com: 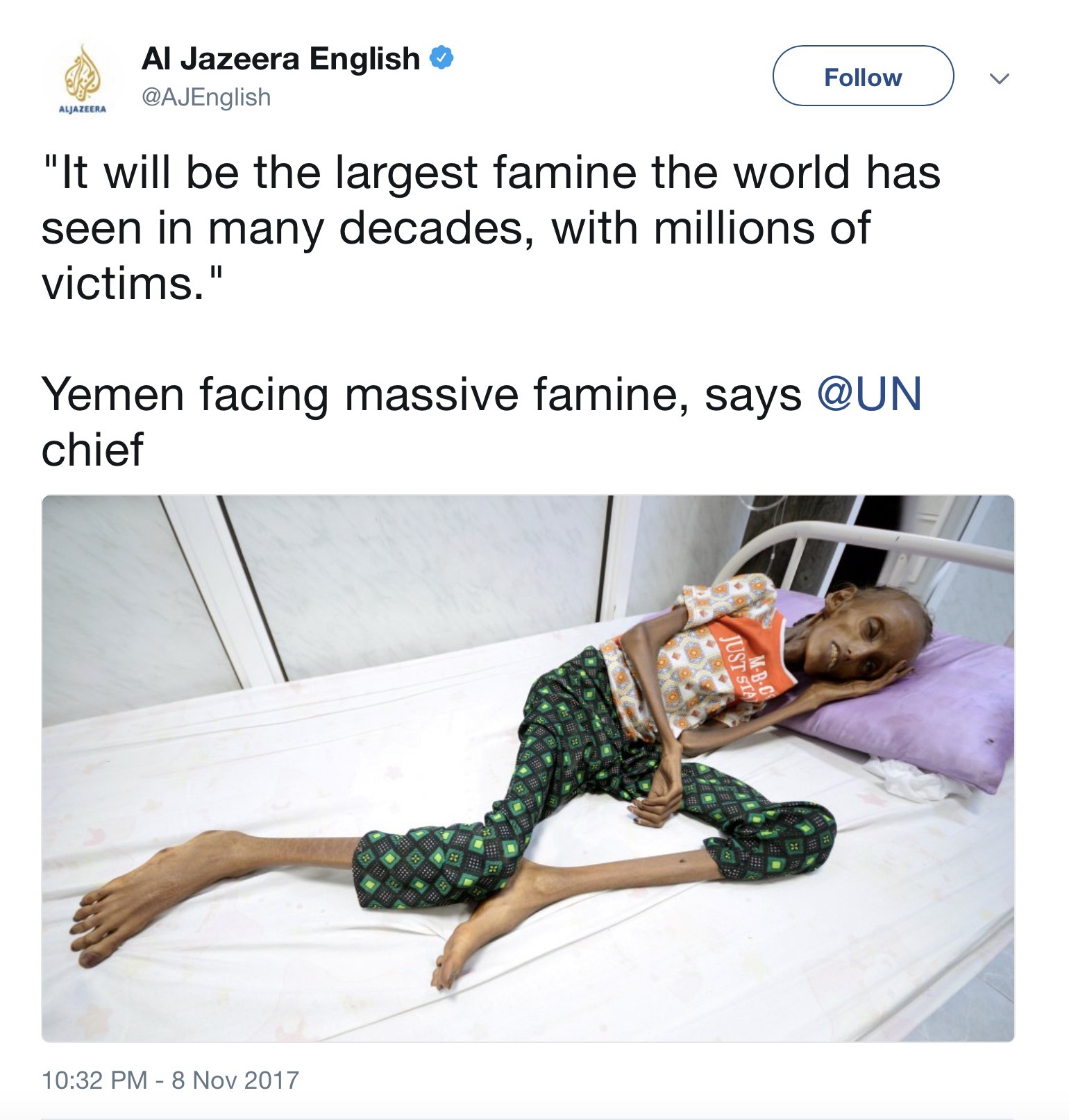 Two years ago, German intelligence warned the world of the unique risks Saudi Arabia posed to the region. I covered it at the time in the post, German Intelligence Warns – Saudi Arabia to Play “Destabilizing Role” in the Middle East. Here’s an excerpt:

Saudi Arabia is at risk of becoming a major destabilizing influence in the Arab world, German intelligence has warned.

Internal power struggles and the desire to emerge as the leading Arab power threaten to make the key Western ally a source of instability, according to the BND intelligence service.

“The current cautious diplomatic stance of senior members of the Saudi royal family will be replaced by an impulsive intervention policy,” a BND memo widely distributed to the German press reads.

Saudi Arabia has previously been accused of supplying arms and funding to jihadist groups fighting in Syria, including Islamic State in Iraq and the Levant (Isil).

At the core of this intelligence warning was none other than crown prince Mohamed bin Salman, or MBS. I’ve been warning about the specific dangers presented by his brazen and sociopathic personality for years, and the recent purge finally threw it all into the spotlight for everyone to see.

MBS has already wreaked havoc on portions of the region with his reckless and failed polices with respect to both Yemen and Qatar. Today’s post will focus on the humanitarian catastrophe unfolding in Yemen, courtesy of the Saudi crown prince.

To continue reading: Millions Face Starvation in Yemen Due to Saudi Arabia’s Blockade