Global Debt Is Exploding At A Shocking Rate, by Tyler Durden

There is no way this will end well. From Tyler Durden at zerohedge.com:

The primary reason why the global financial system is on the verge of daily collapse, and is only held together with monetary superglue and central bank prayers thanks to now constant intervention of central banks, is because of debt. And, as BofA’s Barnaby Martin succinctly puts it, much more debt is coming since “the legacy of the COVID shock is debt, debt and more debt.” In short: use even more debt to “fix” a debt probem.

So in this world of explosive credit expansion coupled with tumbling economic output where helicopter money has become the norm, central banks – and specifically the ECB – are scaling their QE policies to monetize and absorb much of this debt (relieving the pressure on private investors to buy bonds), more debt “hotspots” mean more vulnerabilities for the global economy.

We won’t preach about the consequences of this debt binge which has catastrophic consequences – we do enough of that already – but below we lay out some of the more stunning facts of global debt levels at the end of Q1 2020 as compiled by the BIS, courtesy of Martin:

Egon von Greyerz is almost certain to be proved right when he says that what we have now amounts to the biggest financial swindle in history. From von Greyerz at goldswitzerland.com: 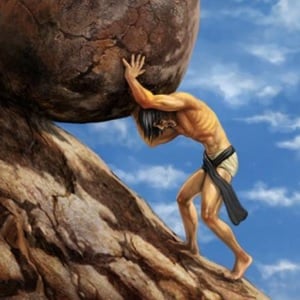 Zeus punished the hubristic King Sisyphus to roll a huge boulder up a very steep hill in Hades. Before Sisyphus reached the top, the stone rolled down and he had to start all over again.

Hubris is serious sin that seldom goes unpunished. The arrogance and uber-confidence which TPTB (the powers that be) have displayed in leading the world to ruin will clearly be severely punished. But sadly the punishment will affect the whole world and not just the Elite that caused it.

It could be argued that blaming one group for the coming global collapse might be unfair. The world economy has always oscillated between boom and bust and is thus a natural phenomenon like the seasons. But the main difference this time is the incredible damage that governments, central bankers and bankers have inflicted on the world.

This is what is called running on empty. US debt creation has nothing to do with investing in productive assets. With the debt to GDP ratio doubling in 14 years it is clear evidence that all the printed money is not going into the real economy but is supporting a bankrupt financial system which has kept the money to prop up their own insolvent balance sheets and to remunerate the top executives with fantasy money.

A Decade Of… What Exactly? by Michael Every

Historians looking back on the decade now ending may well name it the decade of debt. From Michael Every at zerohedge.com:

Authored by Rabobank’s Michael Every

We are now close to the end of the year and, given it is 2019, also of the second decade of the 21st century. That marks an opportune time to look backwards in order to then try to look forwards.

In many respects this has been a difficult decade – for example, what do we even refer to it as: “The twenty-tens” or “The twenty-teens”? Far more importantly, of course, the key developments seen over the last ten years present a very mixed picture. Some are certainly positive, and yet arguably more are deeply negative.

END_OF_DOCUMENT_TOKEN_TO_BE_REPLACED

Central banks are worried that the mountain of debt they helped create might collapse, leading to bad things. From Tyler Durden at zerohedge.com:

Something happens to the world’s “really smart people” when the topic of debt is discussed: they become blabbering idiots.

Consider that last month we reported that according to the Institute of International Finance, global debt has now hit $250 trillion and is expected to rise to a record $255 trillion at the end of 2019, up $12 trillion from $243 trillion at the end of 2018, and nearly $32,500 for each of the 7.7 billion people on planet. “With few signs of slowdown in the pace of debt accumulation, we estimate that global debt will surpass $255 trillion this year,” the IIF said in the report. 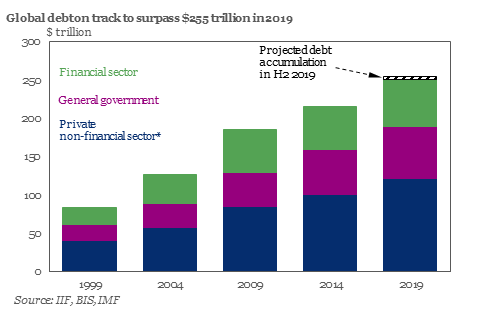 Separately, Bank of America recently calculated that since the collapse of Lehman, government debt has increased by $30tn, corporates debt by $25tn, household by $9tn, and financial debt by $2tn; And with central banks expected to support government debt, BofA warns that “the biggest recession risk is disorderly rise in credit spreads & corporate deleveraging.”

The world’s debt load is by far its most threatening issue. From Colin Lloyd at aier.org:

END_OF_DOCUMENT_TOKEN_TO_BE_REPLACED

The World Will Pay for Not Dealing With Debt, by Satyajit Das

The longer the world does not deal with debt, the more painful the eventual resolution will be. From Satyajit Das at bloomberg.com:

Inventive policymaking has only made the problem worse, guaranteeing that any eventual restructuring will be all the more painful.

Since 2008, governments around the world have looked for relatively painless ways to lower high debt levels, a central cause of the last crisis. Cutting interest rates to zero or below made borrowing easier to service. Quantitative easing and central bank support made it easier to buy debt. Engineered increases in asset prices raised collateral values, reducing pressure on distressed borrowers and banks.

All these policies, however, avoided the need to deleverage. In fact, they actually increased borrowing, especially demand for risky debt, as income-starved investors looked farther and farther afield for returns. Since 2007, global debt has increased from $167 trillion ($113 trillion excluding financial institutions) to $247 trillion ($187 trillion excluding financial institutions). Total debt levels are 320 percent of global GDP, an increase of around 40 percent over the last decade.

The selloff in GE is not an isolated event. More investment grade credits to follow. The slide and collapse in investment grade debt has begun… (and later) Don’t be fooled by bond prices holding up, because trading volumes are down. There are fewer bids in the market, and the dispersion of bids is wider. It is time to jog—not walk—to the exits of credit and liquidity risk.

From a 50,000-feet viewpoint, we’re probably in a global debt bubble…Global debt to GDP is at an all-time high…This is going to be a very challenging time for policymakers moving forward.

Last week, I talked about Ray Dalio’s new book on debt cycles. He describes how debt is inherently cyclical, because it enables more spending now that must be offset by less spending later.

END_OF_DOCUMENT_TOKEN_TO_BE_REPLACED

It’s possible the decline has already begun. . . by Simon Black

It is quite possible the stock market has already put it a top that will stand for many years. From Simon Black at sovereignman.com:

October can be an unforgiving month.

The terrible stock market crash that signaled the beginning of the Great Depression was in October of 1929.

The stock market crash known as Black Monday was in October of 1987.

In 1997, the Asian financial crisis sparked another stock market crash in… you guessed it—October.

And back in 2007 at the height of the giant bubble that almost brought down the entire financial system, the stock market peaked once again in… October.

It’s not that October is particular cursed. Maybe it’s just a coincidence. But I do find it strangely ominous that asset prices seemed to have peaked last month (October) and have been in decline ever since.

Real estate prices are starting to show signs of strain; more than one-third of homes for sale had a large price cut in October– the most discounting in the past eight years.

END_OF_DOCUMENT_TOKEN_TO_BE_REPLACED

Globally, debt is generating less and less growth and is getting more and more costly. From John Mauldin at mauldineconomics.com:

Is debt good or bad? The answer is “Yes.”

Debt is future spending pulled forward in time. It lets you buy something now for which you otherwise don’t have cash available yet. Whether it’s wise or not depends on what you buy. Debt to educate yourself so you can get a better job may be a good idea. Borrowing money to finance your vacation? Probably not.

Unfortunately, many people, businesses, and governments borrow because they can, which for many is possible only because central banks made it so cheap in the last decade. It was rational in that respect but is growing less so as the central banks tighten their policies.

END_OF_DOCUMENT_TOKEN_TO_BE_REPLACED

The debt problem is like watching the streams, levies, and rivers rising during a heavy flood. If it keeps raining, eventually the water overflows over the banks. Debt keeps rising, eventually it will overflow its banks. From Michael Snyder at theeconomiccollapseblog.com:

America, you officially have a debt problem, and I am not just talking about the national debt.  Consumer bankruptcies are surging, corporate debt has doubled since the last financial crisis, state and local government debt loads have never been higher, and the federal government has been adding more than a trillion dollars a year to the federal debt ever since Barack Obama entered the White House.  We have been on the greatest debt binge in human history, and it has enabled us to enjoy our ridiculously high standard of living for far longer than we deserved.  Many of us have been sounding the alarm about our debt problem for a very long time, but now even the mainstream news is freaking out about it.  I have a feeling that they just want something else to hammer President Trump over the head with, but they are actually speaking the truth when they say that we are facing an unprecedented debt crisis.

For example, the New York Times just published a piece that discussed the fact that the bankruptcy rate among retirees is about three times higher than it was in 1991…

For a rapidly growing share of older Americans, traditional ideas about life in retirement are being upended by a dismal reality: bankruptcy.

The signs of potential trouble — vanishing pensions, soaring medical expenses, inadequate savings — have been building for years. Now, new research sheds light on the scope of the problem: The rate of people 65 and older filing for bankruptcy is three times what it was in 1991, the study found, and the same group accounts for a far greater share of all filers.

Overall, Baby Boomers are doing a whole lot better financially than the generations coming after them, and so this is very troubling news.

And here is another very troubling fact from that same article…

Not only are more older people seeking relief through bankruptcy, but they also represent a widening slice of all filers: 12.2 percent of filers are now 65 or older, up from 2.1 percent in 1991.

The jump is so pronounced, the study says, that the aging of the baby boom generation cannot explain it.

Of course it isn’t just Baby Boomers that are drowning in debt.

Collectively, U.S. households are 13.15 trillion dollars in debt, which is the highest level in American history.