High end housing is getting shellacked. From Wolf Richter at wolfstreet.com:

San Francisco and Silicon Valley are now in the solid leadership role of the housing bust playing out in California with sales collapsing and prices heading south from the peak in April at an astonishing pace.

Just about everything that could come together came together. After a two-year outflux of workers due to working from anywhere, there came the collapse of the startup and crypto scenes, starting in 2021 and continuing unabated, leading to the early entries into my pantheon of Imploded Stocks. In early 2022 came the spike in mortgage rates. In mid-2022 came the downturn in employment at Big Tech. By that time, the Fed had been hiking its policy rates relentlessly, and Quantitative Tightening had kicked off. This was punctuated over the past two months by the chaotic dismantling of the workforce at Twitter and its ecosystem.

Local budgets have fallen into deep deficits – though most are still flush with cash from the pandemic funds received from the federal government and the state.

Vacant office space that is on the market for lease and sublease continues to balloon, while landlords have started to file for huge reductions in assessment values to lower their property taxes, which is going to cut revenues further.

The Housing Bubble Popped, and the Fed Can Let it Rip, by Wolf Richter

The market is going to take interest rates higher and the Fed will follow, as it always does. This is not good news for the housing market. From Wolf Richter at wolfstreet.com:

Raging inflation knocked out the “Fed put,” and banks are no longer on the hook for mortgages; taxpayers and investors are.

The average 30-year fixed mortgage rate has more than doubled since last year, from less than 3%, to now over 7%, the highest in 20 years, the highest since 2002. But there’s a difference between 2002 and now: The magnitude of the home prices.

Home prices have shot up to ridiculous highs in the era of interest rate repression and money printing by the Federal Reserve. But that era ended earlier this year. Now we have surging interest rates and the opposite of money printing: quantitative tightening.

Over the past two years, we’ve seen spikes of home prices of 30% to 60%. In the Miami metro and the Tampa metro, for example, home prices spiked by 60% in two years, according to the Case-Shiller index. Which is just nuts. And we know how this is going to end and it already ended:

5 Signs That The Housing Crash Is Escalating A Lot Faster Than Many Of The Experts Had Anticipated, by Michael Snyder

The house-price crash has arrived and it looks like it will be a doozy. From Michael Snyder at themostimportantnews.com:

The U.S. housing market is absolutely imploding, but nobody should be surprised.  In fact, we were warned way ahead of time that this would happen.  When the Federal Reserve told us that they would be aggressively raising interest rates, we all knew what this would do to the housing bubble.  It was obvious that home prices would fall, home sales would plummet and home builders would get absolutely crushed.  Sadly, that is precisely what we are witnessing.  But instead of reversing course after witnessing all the damage that they have caused, Fed officials are insisting that even more rate hikes are necessary.  So as bad as things are right now, the truth is that they are going to get even worse in the months ahead.

In recent days we have gotten some new data points, and they are sobering.

We haven’t seen numbers like this since 2008, and we all remember what happened back then.

Yes, just about everyone expected that the housing market would slow down, but hardly anyone thought that things would get this bad so soon.

#1 According to Redfin, the number of homes sold in the United States during September dropped by 25 percent…

Record Number Of Homebuyers Walk Away From Contracts As Builders Reel Amid Glut Of Unsold Houses, by Tyler Durden

It hasn’t cratered yet, but the housing market is definitely softening. From Tyler Durden at zerohedge.com:

Between cratering homebuilder and homerbuyer confidence… 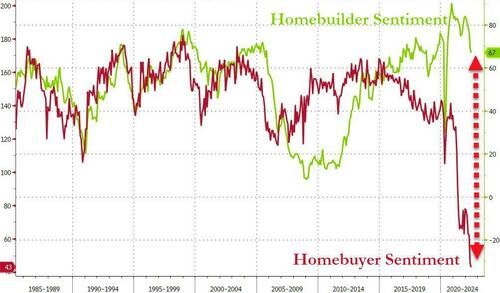 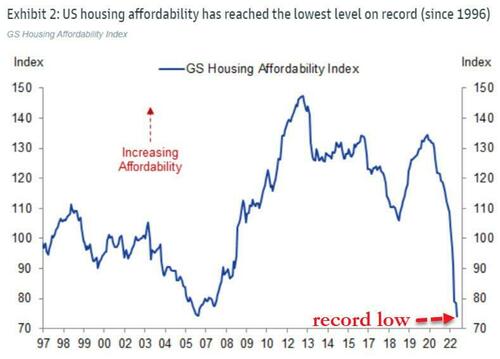 … a record number of new listing with price cuts (amid the collapse in demand). 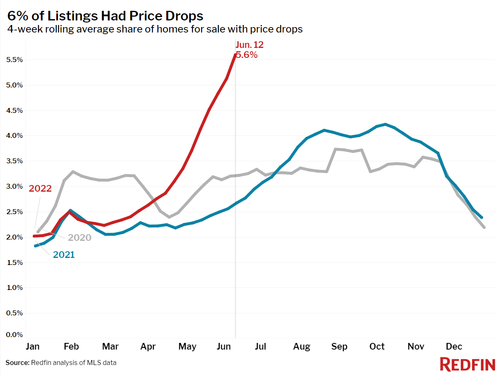 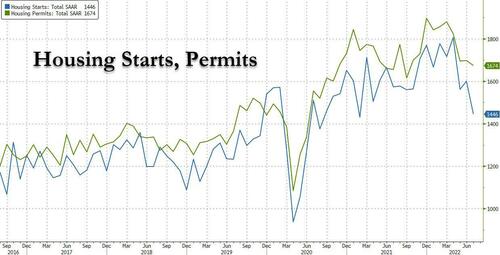 … and so on, as the recent surge in mortgage rates has effectively pushed the housing market into a recession, which is now so widespread that 63,000 home-purchase agreements were called off in July, equal to 16% of homes that went under contract that month. According to Redfin, that’s the highest percentage on record, and only the brief spike during the covid crash – which the promptly reversed – was worse. It’s up from a revised rate of 15% one month earlier and 12.5% one year earlier.

The bond market is oversold and due a pretty substantial rally. Nevertheless, most of us have seen the lowest interest rates were ever going to see in our lifetimes. From Wolf Richter at wolfstreet.com:

Something has to give. And it’s going to be price. 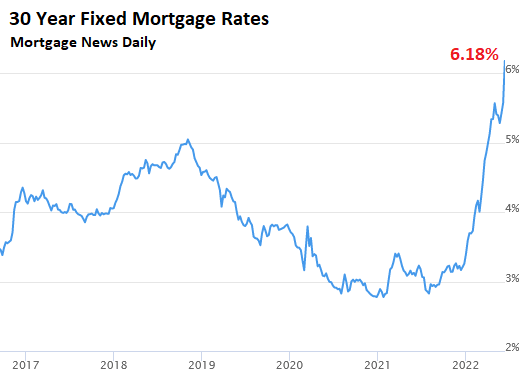 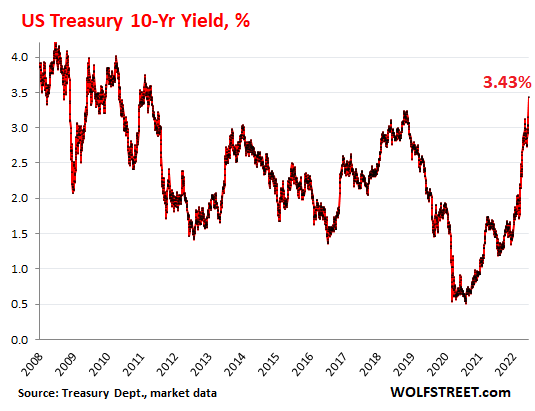 Housing Bubble Getting Ready to Pop: Unsold Inventory of New Houses Spikes by Most Ever, to Highest since 2008, with 9 Months’ Supply, Sales Collapse at Prices below $400k, by Wolf Richter

Cheap credit is the oxygen of housing bubbles and credit is getting more expensive. From Wolf Richter at wolfstreet.com:

Stocks of homebuilders swoon amid worst inflation in construction costs, shortages, and spiking mortgage rates that take buyers out of the market.

Sales of new single-family houses in April plunged by 16.6% from March and by 26.9% from a year ago, to a seasonally adjusted annual rate of 591,000 houses, the lowest since lockdown April 2020, according to the Census Bureau today. Sales of new houses are registered when contracts are signed, not when deals close, and can serve as an early indicator of the overall housing market. 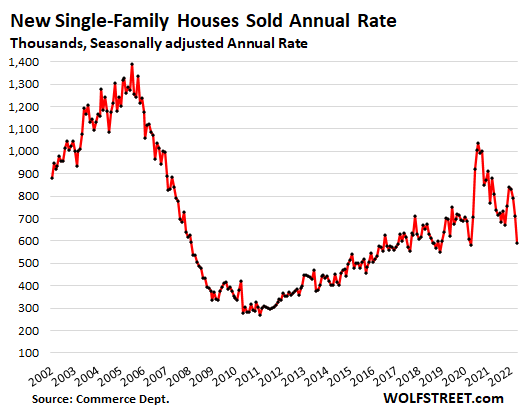 By region, sales plunged the most in the South:

When you make promises you can’t keep, it has consequences other than the broken promise. From Tyler Durden at zerohedge.com:

As a result of high taxes and government debt, combined with a nightmarish looming pension liability, Chicago’s housing market continues to collapse, according to a new write-up in the City Journal.

Average home prices in Chicago have still not recovered from the downturn that started in 2009, despite the fact that property taxes continue to climb. This is part of the reason Illinois ranks highest among states losing people to other areas of the country. Chicago homeowners are also taking big losses when they sell their homes.

“Taxes are high, the services [that taxes] pay for are terrible, and the debt load is so high, so palpably unsustainable that people have no belief that the resources can be found to turn it all around.” 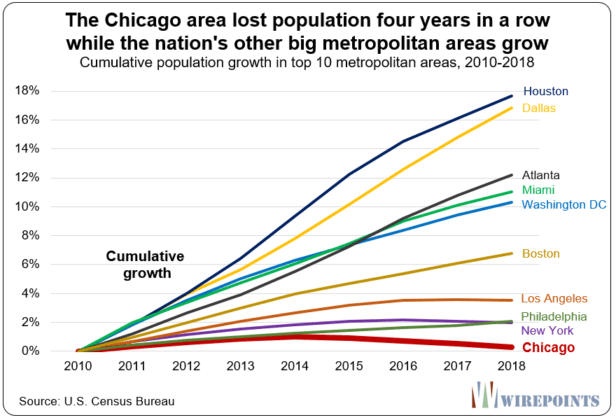 “You won’t recruit a business, you won’t recruit a family to live here,” Chicago mayor Rahm Emanuel said in 2012, warning about the city’s pension problems. And that looks to be the case: Realtor.com predicted that Chicago would have the weakest housing activity this year among the nation’s top 100 markets.

US Housing Market to Get Uglier in Near Future, by Wolf Richter

The home sales index has been moving from the upper left on the graph to the lower right. From Wolf Richter at wolfstreet.com:

Sales decline to steepen, no respite in sight.

The reasons for the housing-market downturn are in the eye of the beholder, as we will see in a moment. But whatever the reasons for it may be, the data on the housing market is getting uglier by the month.

Pending home sales is a forward-looking measure. It counts how many contracts were signed, rather than how many sales actually closed that month. There can be a lag of about a month or two between signing the contract and closing the sale. This morning, the National Association of Realtors (NAR) released its Pending Home Sales Index for November, an indication of the direction of actual sales to be reported for December and January. This index for November fell to the lowest level since May 2014: 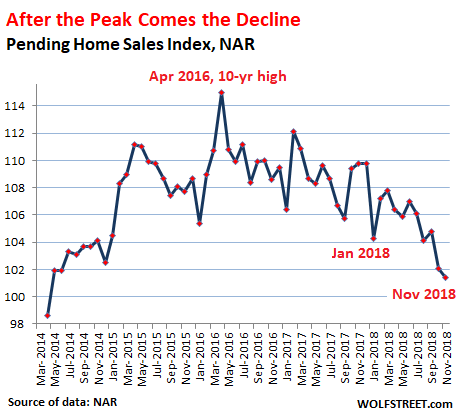 “There is no reason to be concerned,” the report said, reassuringly. And it predicted “solid growth potential for the long-term.”

END_OF_DOCUMENT_TOKEN_TO_BE_REPLACED

Mortgage Rates May Hit 6% Sooner, as Fed Sheds Mortgage-Backed Securities, But What Will that Do to Housing Bubble 2? by Wolf Richter

Rising interest  rates will have a straightforward effect on the housing market: fewer houses will be built and sold. From Wolf Richter at wolfstreet.com:

Mortgage rates are climbing faster than the 10-year Treasury yield.

The average interest rate for 30-year fixed-rate mortgages with conforming loan balances ($453,100 or less) and a 20% down-payment rose to 5.17% for the latest reporting week, according to the Mortgage Bankers Association (MBA) today. This is the highest average rate since September 2009 (chart via Investing.com):

Many people with smaller down payments and/or lower credit ratings are already paying quite a bit more. Top-tier borrowers pay less.

Thus, mortgage rates have moved a little closer to the next line in the sand, 6%, which is still historically low. At that point, the interest rate would be back where it had been in December 2008, when the Fed was unleashing its program of interest rate repression even for long-dated maturities via QE that later included the purchase of mortgaged-backed securities (MBS), which helped push down mortgage rates further.

END_OF_DOCUMENT_TOKEN_TO_BE_REPLACED

Trouble Ahead For The Housing Market, Adam Taggert

Housing may not initiate the next financial crisis, like it did the last one, but it will certainly contribute to it. From Adam Taggert at peakprosperity.com:

He reminds us that housing bubbles follow a predictable progression:

Rubino cites recent statistics that may indicate the US national housing market is finally entering Stage Two after a rip-roaring decade of recovery since the bursting of the 2007 housing bubble:

Taken together, these suggest that residential housing supply is increasing as sales slow, exactly what you’d expect to see in the transition from Stage One to Stage Two.

Stage Two’s deluge of supply sets the table for US housing bubble Stage Three by soaking up the remaining demand and changing the tenor of the market. Deals get done at the asking price instead of way above, then at a little below, then a lot below. Instead of being snapped up the day they’re listed, houses begin to languish on the market for weeks, then months. Would-be sellers, who have already mentally cashed their monster peak-bubble-price checks, start to panic. They cut their asking prices preemptively, trying to get ahead of the decline, which causes “comps” to plunge, forcing subsequent sellers to cut even further.

Sales volumes contract, mortgage bankers and realtors get laid off. Then the last year’s (in retrospect) really crappy mortgages start defaulting, the mortgage-backed bonds that contain their paper plunge in price, et voila, we’re back in 2008.

Rubino’s article is timely, as we’ve lately been seeing a proliferation of signs that the global boom in housing is suddenly cooling. I’ve also recently encountered similar evidence that the housing market in my own pocket of northern California is weakening, and I’m curious to learn if other PeakProsperity.com are seeing the same in their hometowns.

To continue reading: Trouble Ahead For The Housing Market