The military-industrial complex will take care of itself, rain or shine. From Mandy Smithberger at tomdispatch.com:

Hasn’t the Military-Industrial Complex Taken Enough of Our Money?

At this moment of unprecedented crisis, you might think that those not overcome by the economic and mortal consequences of the coronavirus would be asking, “What can we do to help?” A few companies have indeed pivoted to making masks and ventilators for an overwhelmed medical establishment. Unfortunately, when it comes to the top officials of the Pentagon and the CEOs running a large part of the arms industry, examples abound of them asking what they can do to help themselves.

It’s important to grasp just how staggeringly well the defense industry has done in these last nearly 19 years since 9/11. Its companies (filled with ex-military and defense officials) have received trillions of dollars in government contracts, which they’ve largely used to feather their own nests. Data compiled by the New York Times showed that the chief executive officers of the top five military-industrial contractors received nearly $90 million in compensation in 2017. An investigation that same year by the Providence Journal discovered that, from 2005 to the first half of 2017, the top five defense contractors spent more than $114 billion repurchasing their own company stocks and so boosting their value at the expense of new investment.

If the government is looking for some loose change to help fund its fight against the coronavirus, it might start with by axing the military budget. From Kevin Martin at consortiumnews.com:

Once we get past the Covid-19 crisis, the  world’s most gargantuan military machine cannot go back to normal, writes Kevin Martin. 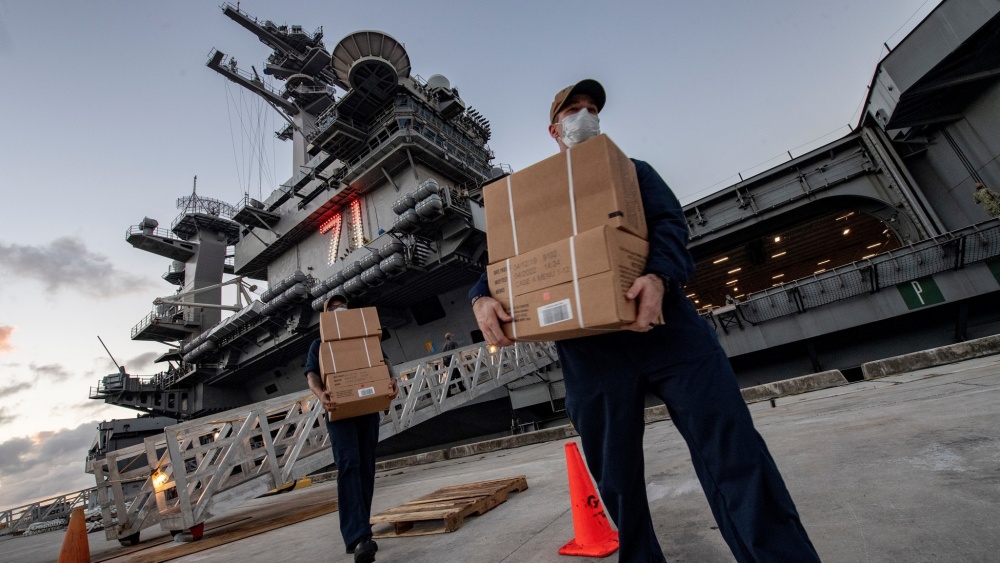 U.S. Navy warships recent surged to the Caribbean to menace Venezuela, when the government could not surge desperately needed ventilators to New York City, New Orleans and Detroit. This should surprise no one, as the U.S. has long prioritized war and preparations for war over public health, but it is particularly outrageous at this time as we face the Covid-19 global pandemic.

Contrast the Trump administration’s trumped-up drug running charges against the government of Venezuela, and military threats against Iran, with the recent call by United Nations Secretary General Antonio Guterres for a global ceasefire in order to concentrate resources on the health crisis. That is what leadership looks like. Reports are encouraging from a number of strife-torn countries; warring forces in over a dozen countries have accepted the ceasefire call. These actions need to be encouraged and expanded, so diplomacy and humanitarian aid can surge.

Trump’s wag the dog move against Venezuela is likely an expensive ruse, or a risky escalation aimed at a longshot regime change attempt to remove President Nicolas Maduro. That is bad enough, but even worse given the devastating impact U.S. economic sanctions have had in exacerbating the economic and health care crisis in the country. The situation in Iran is even worse. In both cases (and others including North Korea), whatever the disputes between governments, it is ordinary Venezuelans and Iranians who suffer the effects of sanctions’ decimation of economic and health security.

END_OF_DOCUMENT_TOKEN_TO_BE_REPLACED

Trillions for defense, a million here and a million there for pandemic preparedness. From Gareth Porter at antiwar.com:

Responsibility for pandemic preparation was privatized under the Obama and Trump administrations. It·s time to face down the national security state that wasted trillions on imperial wars and abandoned Americans to fight coronavirus alone.

Donald Trump’s failure to act decisively to control the coronavirus pandemic has likely made the Covid-19 pandemic far more lethal than it should have been. But the reasons behind failure to get protective and life-saving equipment like masks and ventilators into the hands of health workers and hospitals run deeper than Trump’s self-centered recklessness.

Both the Obama and Trump administrations quietly delegated state and local authorities with the essential national security responsibility for obtaining and distributing these vital items. The failure of leadership was compounded the lack of any federal power center that embraced the idea that guarding for a pandemic was at least as important to national security as preparing for war.

For decades, the military-industrial-congressional complex has force-fed the American public a warped conception of US national security focused entirely around perpetuating warfare. The cynical conflation of national security with waging war on designated enemies around the globe effectively stifled public awareness of the clear and present danger posed to its survival by global pandemic. As a result, Congress was simply not called upon to fund the vitally important equipment that doctors and nurses needed for the Covid-19 crisis.

END_OF_DOCUMENT_TOKEN_TO_BE_REPLACED

To say the US military spends money like a drunken sailor is an insult to drunken sailors everywhere. From Mandy Smithberger at tomdispatch.com:

Hold on to your helmets! It’s true the White House is reporting that its proposed new Pentagon budget is only $740.5 billion, a relatively small increase from the previous year’s staggering number. In reality, however, when you also include war and security costs buried in the budgets of other agencies, the actual national security figure comes in at more than $1.2 trillion, as the Trump administration continues to give the Pentagon free reign over taxpayer dollars.

You would think that the country’s congressional representatives might want to take control of this process and roll back that budget — especially given the way the White House has repeatedly violated its constitutional authority by essentially stealing billions of dollars from the Defense Department for the president’s “Great Wall” (that Congress refused to fund). Recently, even some of the usual congressional Pentagon budget boosters have begun to lament how difficult it is to take the Department’s requests for more money seriously, given the way the military continues to demand yet more (ever more expensive) weaponry and advanced technologies on the (largely bogus) grounds that Uncle Sam is losing an innovation war with Russia and China.

And if this wasn’t bad enough, keep in mind that the Defense Department remains the only major federal agency that has proven itself incapable of even passing an audit. An investigation by my colleague Jason Paladino at the Project On Government Oversight found that increased secrecy around the operations of the Pentagon is making it ever more difficult to assess whether any of its money is well spent, which is why it’s important to track where all the money in this country’s national security budget actually goes.

The War in Questions: Making Sense of the Age of Carnage, by Tom Engelhardt

Several obvious, pointed, and unanswered questions about the US’s many wars. From Tom Englehardt at tomdispatch.com:

My first question is simple enough: After 18-plus years of our forever wars, where are all the questions?

Almost two decades of failing American wars across a startlingly large part of the planet and I’d like to know, for instance, who’s been fired for them? Who’s been impeached? Who’s even paying attention?

I mean, if another great power had been so fruitlessly fighting a largely undeclared set of conflicts under the label of “the war on terror” for so long, if it had wasted trillions of taxpayer dollars with no end in sight and next to no one in that land was spending much time debating or discussing the matter, what would you think? If nothing else, you’d have a few questions about that, right?

Well, so many years later, I do have a few that continue to haunt me, even if I see them asked practically nowhere and, to my frustration, can’t really answer them myself, not to my satisfaction anyway. In fact, since 2001 — with the exception of the months leading up to the invasion of Iraq when America’s streets suddenly filled with hundreds of thousands of demonstrators asking a range of questions (“How did USA’s oil get under Iraq’s sand?” was a typical protest sign of that moment) — our never-ending wars have seldom been questioned in this country. So think of what follows not as my thoughts on the war in question but on the war in questions.

END_OF_DOCUMENT_TOKEN_TO_BE_REPLACED

America’s global interventionism is destroying America and wreaking horrific damage in places like the Middle East. From John W. Whitehead at rutherford.org:

“Let us resolve that never again will we send the precious young blood of this country to die trying to prop up a corrupt military dictatorship abroad. This is also the time to turn away from excessive preoccupation overseas to the rebuilding of our own nation. America must be restored to a proper role in the world. But we can do that only through the recovery of confidence in ourselves…. together we will call America home to the ideals that nourished us from the beginning. From secrecy and deception in high places; come home, America. From military spending so wasteful that it weakens our nation; come home, America.”—George S. McGovern, former Senator and presidential candidate

I agree wholeheartedly with George S. McGovern, a former Senator and presidential candidate who opposed the Vietnam War, about one thing: I’m sick of old men dreaming up wars for young men to die in.

END_OF_DOCUMENT_TOKEN_TO_BE_REPLACED