Amazon’s Woke Lord Of The Rings Is The Death Rattle Of Social Justice Content, by Brandon Smith

J.R.R. Tolkien’s trilogy The Lord of the Rings is an allegorical masterpiece and Peter Jackson’s film trilogy actually did it justice. Amazon is bringing out its own adaptation and it’s got nowhere to go but down. From Brandon Smith at alt-market.com: 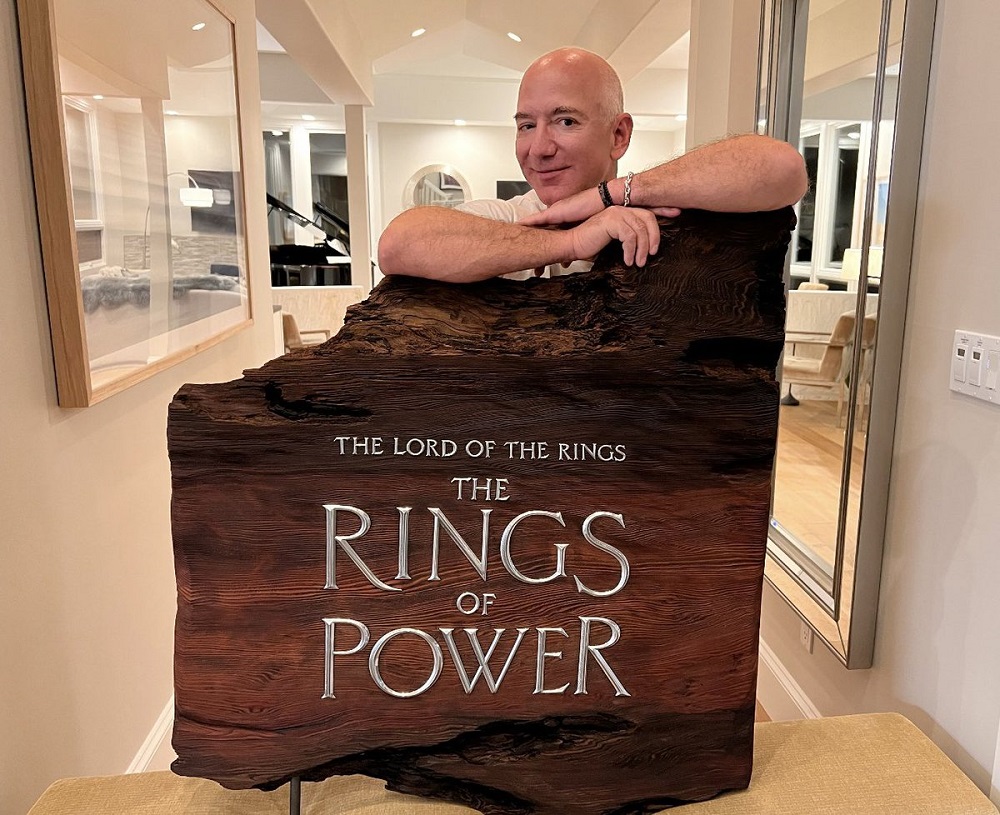 Modern social justice in all of its forms is communism. The political left doesn’t want to admit it openly, but there is no way around it and there is no debate. Some would call it “cultural Marxism,” but the bottom line is that there is no such thing as a legitimate social justice movement in the west because by law all people regardless of their ethnic circumstances are equally protected. You could say that SJWs are rebels without a cause, but I would point out that “social justice” is not their real cause. They aren’t really interested in equality, they are interested in control.

There is a classic playbook for communist sabotage of a target society, and one of the first tactics is always the destruction of that society’s history and symbols. When Mao Zedong announced the birth of the “Cultural Revolution” in China in 1966, his goal was to disrupt growing discontent among the Chinese people with the broken promises of the communist regime. Only 8 years earlier in 1958 Mao had initiated the “Great Leap Forward,” which was a purge of his political opponents as well as a massive population reduction program that used food as a weapon. After the deaths of over 65 million Chinese citizens, Mao sought to redirect public anger by scapegoating a supposed conspiracy of “capitalists and imperialists.”

The Cultural Revolution was essentially a nationwide witch hunt spearheaded by rabid and ignorant children; people easy for the government to manipulate and exploit. They scoured their own towns and cities as spies and enforcers for the CCP, looking for any signs that their neighbors were part of the conspiracy to disrupt the communist collective. They held tribunals and struggle sessions where anyone who said the wrong thing or who angered the wrong person was publicly humiliated or even murdered as “insurrectionists” by a mob of communist zealots.

Most importantly, the Cultural Revolution was used as a means to utterly destroy any remnants of Chinese history before the commies arrived on the scene. Museums and universities were raided and ancient artworks, documents, books and historical parchments were burned in pyres. Historians and people with knowledge of the Chinese heritage were marched up and down the streets and chastised as enemies of the people. Statues were torn down and entire buildings razed to the ground. The communist system cannot gain dominance without two things – Rule at the barrel of a gun, and complete control over cultural products and information.

The Cost of America’s Cultural Revolution, by Heather MacDonald

The typical American university has gone from an idealized haven where students and their professors search for truth to a promoter of propaganda and suppressor of dissent. From Heather MacDonald at city-journal.org:

Social-justice ideology is turning higher education into an engine of progressive political advocacy, according to a new report by the National Association of Scholars. Left-wing activists, masquerading as professors, are infiltrating traditional academic departments or creating new ones—departments such as “Solidarity and Social Justice”—to advance their cause. They are entering the highest rung of college administration, from which perch they require students to take social-justice courses, such as “Native Sexualities and Queer Discourse” or “Hip-hop Workshop,” and attend social-justice events—such as a Reparations, Repatriation, and Redress Symposium or a Power and Privilege Symposium—in order to graduate.

END_OF_DOCUMENT_TOKEN_TO_BE_REPLACED

America Has No Peace Movement – Blame the ‘White Supremacists’, by Philip Giraldi

The United States of America has no peace movement even though the country has been mired in unwinnable wars since 2001 and opinion polls suggest that there is only lukewarm support among the public for what is taking place in Afghanistan and Syria. This is in part due to the fact that today’s corporate media virtually functions as a branch of government, which some might refer to as the Ministry of Lies, and it is disinclined to report on just how dystopic American foreign and national security policy has become. This leaves the public in the dark and allows the continued worldwide blundering by the US military to fly under the radar.

The irony is that America’s last three presidents quite plausibly can be regarded as having their margins of victory attributed to a peace vote. George W. Bush promised a more moderate foreign policy in his 2000 campaign, Obama pledged to undo much of the harsh response to 9/11 promulgated by Bush, and Donald Trump was seen as the less warlike candidate when compared to Hillary Clinton. So the public wants less war but the politicians’ promises to deliver have been little more than campaign chatter, meaning that the United States continues to be locked into the same cycle of seeking change through force of arms.

END_OF_DOCUMENT_TOKEN_TO_BE_REPLACED

A Post-Mortem On The Corpse Of ‘Social Justice’, by Brandon Smith

The social justice movement may be going extinct. Brandon Smith has an article that should brighten your day. From Smith at alt-market.com:

I have been commenting on social justice propaganda for quite some time; long before it was fashionable to do so, and long before there was an organized movement of support to defend commentators who dared to question the insane dictates of the cult of political correctness. In my article ‘The Twisted Motives Behind Political Correctness’, published in early 2014, I outlined the basic philosophical underpinnings of political correctness and what these beliefs tend to lead to. At the time, the future for champions of individual liberty and reason appeared rather bleak. Today, I am happy to say the backlash against “third-wave feminism” and cultural Marxism has expanded beyond anything I could have dreamed.

I do not want to diminish or underestimate the threat still posed to personal freedom by the adherents of the social justice cult, but at this stage I think it is safe to say that political correctness is effectively a dead movement walking.

Recent statistics without bias are hard to come by. That said, the latest available numbers show that people who agree with “gender equality” are many, but those who identify as “feminist” are slim. In the U.S. this constitutes 1 in 4 or 1 in 5 that identify as feminist depending on which polls you look at, while in the U.K. feminists make up only 7 percent of the population.

According to the CDC, abortion rates from 2008-2014 fell to historic lows post Roe v Wade. Abortion being a primary platform and leverage issue for social justice warriors, I take it as a good sign that even in a time of severe economic instability people are backing away from abortion as an acceptable option.

Just as a general observation, social justice has not been a reliable driver for political success, considering the abject failure of the Clinton Campaign in 2016, which clung tightly to SJW ideologies throughout the election cycle.

And finally, social justice has also not been selling so great in the marketplace. This is most evident in the entertainment world, where movies created by producers with open social justice agendas continually fail to bring in expected box office numbers.

For example, the feminist-produced and-directed Ghostbusters reboot ended with a dismal showing compared to many other blockbuster movies with the same production costs, ending its run with an estimated $70 million loss.

Feminist action films perpetuating the fantasy of physical parity between the sexes, like the movie Atomic Blonde, though receiving accolades from mainstream critics (like all social justice films do), have had embarrassing showings in theaters.

To continue reading: A Post-Mortem On The Corpse Of ‘Social Justice’

U of Arizona is Hiring ‘Social Justice Advocates’ to Police Fellow Students for ‘Bias Incidents’, by Ian Miles Cheong

U of A used to have a reputation as one of the nation’s premier party schools, a great place for students of either sex (there weren’t any intermediate or alternative genders back then) to lose their virginity. Now it’s apparently as boring as a Clinton speech (Bill, Hillary, or Chelsea, take your pick). From Ian Miles Cheong at heatst.com:

Administrators at the University of Arizona are now accepting applications for “social justice advocates,” whose job it is to snitch on other students accused of bias. They’re also expected to hold educational programs about “the mosaic of diversity, multiculturalism and inclusivity” and maintain “social justice bulletin boards” in student residence halls.

The job, which officially calls (archived link) for the advocates to “report any bias incidents or claims to appropriate Residence Life staff,” pays the student workers $10 an hour. They’re expected to work 15 hours a week, which means they could be making as much as $600 a month to police their fellow students.

Part of the job description reads:

“The position also aims to increase understanding of one’s own self through critical reflection of power and privilege, identity and intersectionality, systems of socialization, cultural competency and allyship as they pertain to the acknowledgement, understanding and acceptance of differences. Finally, this position intends to increase a student staff member’s ability to openly lead conversations, discuss differences and confront diversely insensitive behavior.”

The core responsibility, however, is to report bias claims. Bias incidents, which in recent years are increasingly being policed on college campuses, can range from outright acts of racism to far more subtle “microaggressions” such as referring to someone as a “guy” or wearing dreadlocks while white.

The social justice advocate’s job will also be, according to the job posting, to foster dialogue “related to diversity, multiculturalism and social justice”. Furthermore, the advocates will be tasked with “increasing awareness of diverse identities” and are expected to “promote inclusive communities.”

Lastly, these wildcats are expected to “be punctual in all position-related functions and tasks”.

To continue reading: U of Arizona is Hiring ‘Social Justice Advocates’ to Police Fellow Students for ‘Bias Incidents’

Is the right wing beating the left wing at its own game? Gavin McInnes thinks so. From McInnes on a guest post at theburningplatform.com:

“Invent a weapon,” Jordan Peterson said on Tuesday, “and your enemies will have it within one generation.” He was talking about Gamergate feminist Brianna Wu, who was learning the hard way that YouTube’s Restricted Mode was hurting the gays it was supposed to protect. You may be thinking, “Wu who?” right now, but you should be saying, “Woo-hoo!” because Peterson’s observation is profound. Not only are the bots turning on their creators, we are too. We’ve taken Saul Alinsky’s Rules for Radicals and turned it into our guidebook. We are the Social Justice Warriors now, and we’re way better at it than they ever were.

Right now, a man in a MAGA hat is suing a bar in New York called The Happiest Hour for booting him out solely because he loves Trump. Getting kicked out of bars is pretty common for people in MAGA hats above the Mason–Dixon line. The old right would venerate the entrepreneur and quietly take the high road out of the bar. Not anymore. Since the lawsuit was announced, Trump supporters have been flooding the bar. One MAGA woman was just paid $150 to get lost.

The new right wing does more than just get petty when the going gets rough. We appropriate. When you attack us, we turn it into a slogan. Hillary’s “basket of deplorables” made us into The Deplorables. Her “fake news” now defines all the news that lies about us. We even got her freaking out about a green frog. Since then, we’ve convinced them that everything from an “OK” gesture to a bobbing purple dove to a glass of milk is a secret Nazi code. It’s so easy to turn them into a dizzy Chihuahua frantically chasing his own tail that it’s almost cruel—almost.