Why Orwell matters, by Bruno Waterfield

Orwell saw through, defined, and called out the depredations of freedom’s enemies. From Bruno Waterfield at spiked-online.com:

His defence of freedom flies in the face of all that is woke and regressive today.

Most people think that George Orwell was writing about, and against, totalitarianism – especially when they encounter him through the prism of his great dystopian novel, Nineteen Eighty-Four.

He saw, clearly and vividly, that to lose control of words is to lose control of meaning. That is what frightened him about the totalitarianism of Nazi Germany and Stalinist Russia – these regimes wanted to control the very linguistic substance of thought itself.

And that is why Orwell continues to speak to us so powerfully today. Because words, language and meaning are under threat once more.

The totalitarian regimes of Nazi Germany and Stalin’s Soviet Union represented something new and frightening for Orwell. Authoritarian dictatorships, in which power was wielded unaccountably and arbitrarily, had existed before, of course. But what made the totalitarian regimes of the 20th century different was the extent to which they demanded every individual’s complete subservience to the state. They sought to abolish the very basis of individual freedom and autonomy. They wanted to use dictatorial powers to socially engineer the human soul itself, changing and shaping how people think and behave.

An Offer You Can’t Refuse, by Doug “Uncola” Lynn

Doug “Uncola” Lynn reviews Everything I Know About Business I Learned From The Godfather. As you’ve probably already guessed, I wouldn’t be posting it if it was a bad review. From Lynn at theburningplatform.com: 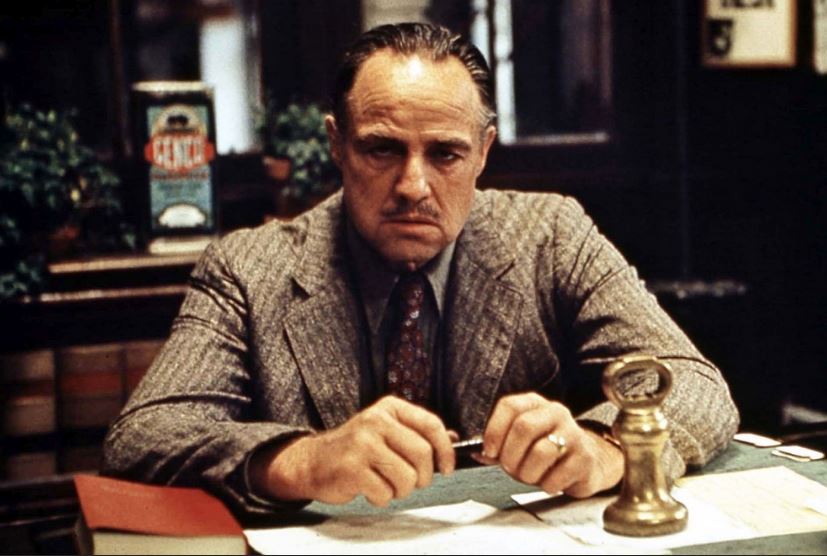 We read to know we’re not alone.

Although that particular truism is often mistakenly attributed to the author C.S. Lewis, it was actually William Nicholson who wrote those words in his 1989 play “Shadowlands”, a story about C.S. Lewis.

Indeed. The power of words. And perhaps many of us out here in the interwebic blogosphere write to know we’re not alone as well.

We use words to comfort and curse, to encourage, to promise, to teach, buy, sell, debate, learn, manipulate, lie, share, seduce, pray, preach, promote, warn, and even survive.

In the aforementioned play, “Shadowlands“, there is another quote that many now reading this may also find relevant to our times:

….pain is God’s megaphone to rouse a deaf world. Why must it be pain? Why can’t he rouse us more gently, with violins or laughter? Because the dream from which we must be wakened, is the dream that all is well.

No, Dear Reader, all is not well.  But it never has been in this corrupt world; or, at least, very well for very long. Everything turns. And whether or not any megaphonic pain originates from God or the devil is beside the point.  The truth remains: life is suffering and it’s been that way from the time of man’s first moans.

END_OF_DOCUMENT_TOKEN_TO_BE_REPLACED

Outside of Washington, the world makes way for a rising power and its currency. From Wolf Richter, at wolfstreet.com:

Now even Israel – joined at the hip to the US though the relationship has run into rough waters – has applied to become a founding member of the China-led Asian Infrastructure Investment Bank. Despite US gyrations to keep them from it, over 40 countries, including bosom buddies Australia, Britain, and Germany, have signed up to join. Japan is still wavering politely.

The US government sees the China-dominated AIIB as competition to the US-dominated World Bank and Asian Development Bank. But now that it is clear even to the White House that the US can’t stop the tide, Treasury Secretary Jack Lew backpedaled vigorously on Tuesday. The government would welcome the AIIB, he suddenly said, as long as certain conditions are met, such as adequate transparency.

So after this bruising setback, the US now has another opportunity to oppose China’s financial and monetary ambitions.

China is trying to get the IMF to bestow reserve currency status on the yuan, which would add the yuan to a glorious basket that includes the dollar and the euro – currently the dominant reserve currencies with a 63% and 22% share respectively. So it has been lobbying core members of the IMF behind the scenes for support, and they’re coming around despite US conniptions, the Wall Street Journal reported.

China also wants the yuan to become part of the IMF’s Special Drawing Rights “in the foreseeable future,” Yi Gang, Director of the State Administration of Foreign Exchange and Deputy Governor of the People’s Bank of China, pointed out a couple of weeks ago. With the yuan, SDRs – which currently include only the dollar, the euro, the yen, and the British pound – would “undoubtedly” be more “representative” of the global economic landscape, Yi said.

Numerous countries are already publicly supporting the yuan as a payment currency. Excluding transactions between China and Hong Kong, the yuan’s use as payment currency is still tiny and edged down last year, handicapped also by China’s restrictions on capital flows. But hey, those are minor details. By now, there are 15 yuan clearing centers around the world, including in London, Frankfurt, Paris, and Luxembourg.

And oops, the rebellious city of Los Angeles, in the rebellious state of California, has signed such a deal with the Industrial and Commercial Bank of China late last year, without apparently asking distant Washington for permission. So this is happening, whether the US government wants it or not.

Posted in Economics, Fiction, Other Views

From Kevin O’Neill, a lawyer at Squire Patton Boggs representing two fraternities at the University of Virginia that have refused to sign an agreement governing, among other matters, alcohol consumption at fraternity parties:

The fact is the university has never acknowledged that they made a mistake in suspending 25 percent of the student body that had nothing to do with an article that proved to be erroneous. The university has not apologized and has not explained why they took this action.

The article in question is a Rolling Stone article alleging that a woman named “Jackie” was a gang-raped at a fraternity party by seven men. The story was subsequently discredited when it was discovered that it did not comport with verifiable facts. Rolling Stone acknowledged errors in the story, among which were its failure to seek comment from the accused fraternity and its members. Before the story was discredited, the university suspended all fraternities. The university owes an apology to the fraternities for taking action against the entire group based on an unsubstantiated allegation against one of them. The two hold-out fraternities should be commended for refusing a punishment based on transgressions that did not happen.

The WSJ Looks At “Non-GAAP” Earnings, Is Horrified By What It Finds, from Zero Hedge

There is a reason why, when looking at S&P 500 earnings, we only care about GAAP numbers: the reason is that any non-GAAP “data” has become as meaningless as “adjusted EBITDA” – a goalseeked, procyclical placeholder which gives zero indication of the true financial state of the company and is merely a propaganda tool used by management and its preferred investment bank to raise capital or its stock price (and hence, equity-linked executive compensation) to naive investors…

…Well, we are delighted that finally others too are starting to look at the real gimmicks used and abused by corporations everywhere to “report” better than expected numbers. Enter the WSJ, which came, saw at Non-GAAP “numbers”, and was horrified to find the costs companies are “stripping out of those measures to enable themselves to show profits seem to be getting ever more eyebrow-raising.”

For anyone who spends any time examining financial statements, or reading Zero Hedge, this is not news. However, as is so often the case, the mainstream media has now blessed a “truth” long ago uncovered and discussed on non-mainstream web sites. The simple truth here, for those eleven people who still do fundamental analysis of companies’ financials, is that reported numbers, especially those which are some company-designed metric, have to be taken with a shaker of salt. But never mind that, what’s the Fed going to do next?

For the rest of the Zero Hedge article: http://www.zerohedge.com/news/2015-01-08/wsj-looks-non-gaap-earnings-horrified-what-it-finds