Who Will Be Brave in Huxley’s New World? By Cynthia Chung

Was Aldous Huxley’s Brave New World a prophetic warning or an instruction manual? From Cynthia Chung at strategic-culture.org:

No wonder that the Tavistock Institute and the CIA became involved in looking at the effects of LSD and how to influence and control the mind.

“ ‘Science?’….’Yes,’ Mustapha Mond was saying, ‘that’s another item in the cost of stability. It isn’t only art that’s incompatible with happiness; it’s also science. Science is dangerous; we have to keep it most carefully chained and muzzled…I’m interested in truth, I like science. But truth’s a menace, science is a public danger. As dangerous as it’s been beneficent. It has given us the stablest equilibrium in history…But we can’t allow science to undo its own good work. That’s why we so carefully limit the scope of its researchers…We don’t allow it to deal with any but the most immediate problems of the moment. All other enquiries are most sedulously discouraged…Our Ford himself did a great deal to shift the emphasis from truth and beauty to comfort and happiness…[but] People still went on talking about truth and beauty as though they were the sovereign goods. Right up to the time of the Nine Years’ War. That made them change their tune all right. What’s the point of truth or beauty or knowledge when the anthrax bombs are popping all around you? That was when science first began to be controlled – after the Nine Years’ War. People were ready to have even their appetites controlled then. Anything for a quiet life. We’ve gone on controlling ever since. It hasn’t been very good for truth, of course. But it’s been very good for happiness. One can’t have something for nothing. Happiness has got to be paid for. You’re paying for it, Mr. Watson – paying because you happen to be too much interested in beauty. I was too much interested in truth; I paid too.’ “

Where does one start in discussing the famed fiction novel of Huxley? Although most agree that there is a definite brilliance to the piece, most are also confused as to what was Huxley’s intention in writing the extremely influential dystopic vision. Was it meant to be taken as an exhortation? An inevitable prophecy? Or rather…was it meant as an Open Conspiracy?

What do I mean by an Open Conspiracy?

If we are going to talk about such things our story starts with H.G. Wells, whom Aldous acknowledged he was most certainly influenced by, particularly by Wells’ novels “A Modern Utopia,” “The Sleeper Awakes,” and “Men Like Gods,” when writing his “Brave New World.”

Will You Love Your Servitude? by Joseph Mercola

Of course you’ll love your servitude! Everything provided by the government and all you have to do is swear fealty. From Joseph Mercola at lewrockwell.com:

Aldous Huxley, an English writer and philosopher, wrote nearly 50 books, the most famous being “Brave New World,” a dystopian science-fiction novel published in 1932. The world in the novel is a futuristic one based on science and technology. Emotions and the sense of individuality are eliminated, starting in childhood, via the use of conditioning.1

It’s a work of fiction, but concepts on which it is based, including the power to condition humans to accept an abnormal state of life, are not. In the video above, you can hear a 1962 interview with Huxley, in which he speaks about the use of persuasion and conditioning to gain ultimate power and control over society.

“If you are going to control a population for any length of time you must have some measure of consent,” he said.2 His words ring eerily true in 2021.

Technology: distracting, Disturbing, Deceiving and Deluding Ourselves to Death, by Jim Quinn

One way to tyrannize people is to distract them from what you’re doing. From Jim Quinn at theburningplatform.com:

“What Huxley teaches is that in the age of advanced technology, spiritual devastation is more likely to come from an enemy with a smiling face than from one whose countenance exudes suspicion and hate. In the Huxleyan prophecy, Big Brother does not watch us, by his choice. We watch him, by ours. There is no need for wardens or gates or Ministries of Truth.

When a population becomes distracted by trivia, when cultural life is redefined as a perpetual round of entertainments, when serious public conversation becomes a form of baby-talk, when, in short, a people become an audience and their public business a vaudeville act, then a nation finds itself at risk; a culture-death is a clear possibility.” ― Neil Postman, Amusing Ourselves to Death: Public Discourse in the Age of Show Business 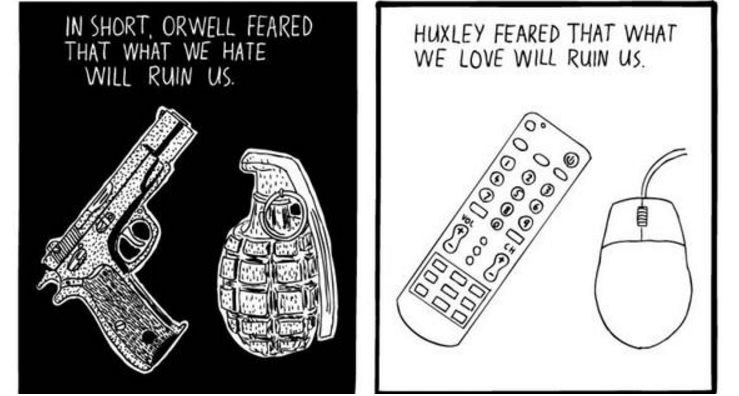 First off, these technological “improvements” did not eliminate any humans from the equation. The housekeepers responsible for the restrooms continued to be employed. Prior to the remodel they would fill a metal bin with individual paper towels and fill the soap dispenser with liquid soap. Now they have to insert a roll of paper towels in the electronic dispenser and a cartridge of soap in the electronic soap dispenser.