Exclusive: We Have Acquired The Department Of Homeland Security’s Complete List Of Terror Threats 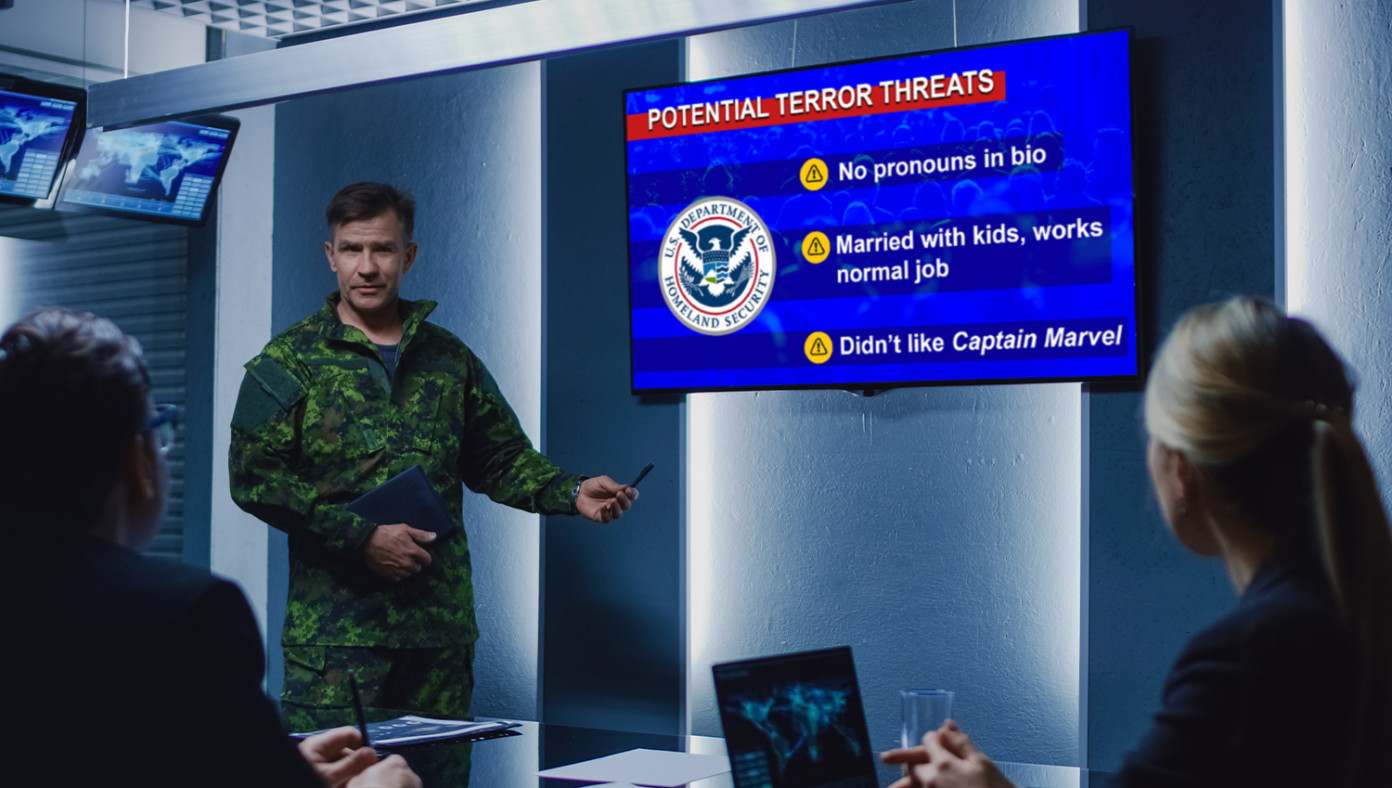 The Babylon Bee has obtained a leaked copy of the complete list of red flags the Department of Homeland Security looks for when assessing terror threats. Is your neighbor a terrorist? Are YOU a terrorist? Read the list below and find out!

And remember, if you see something, SAY something! 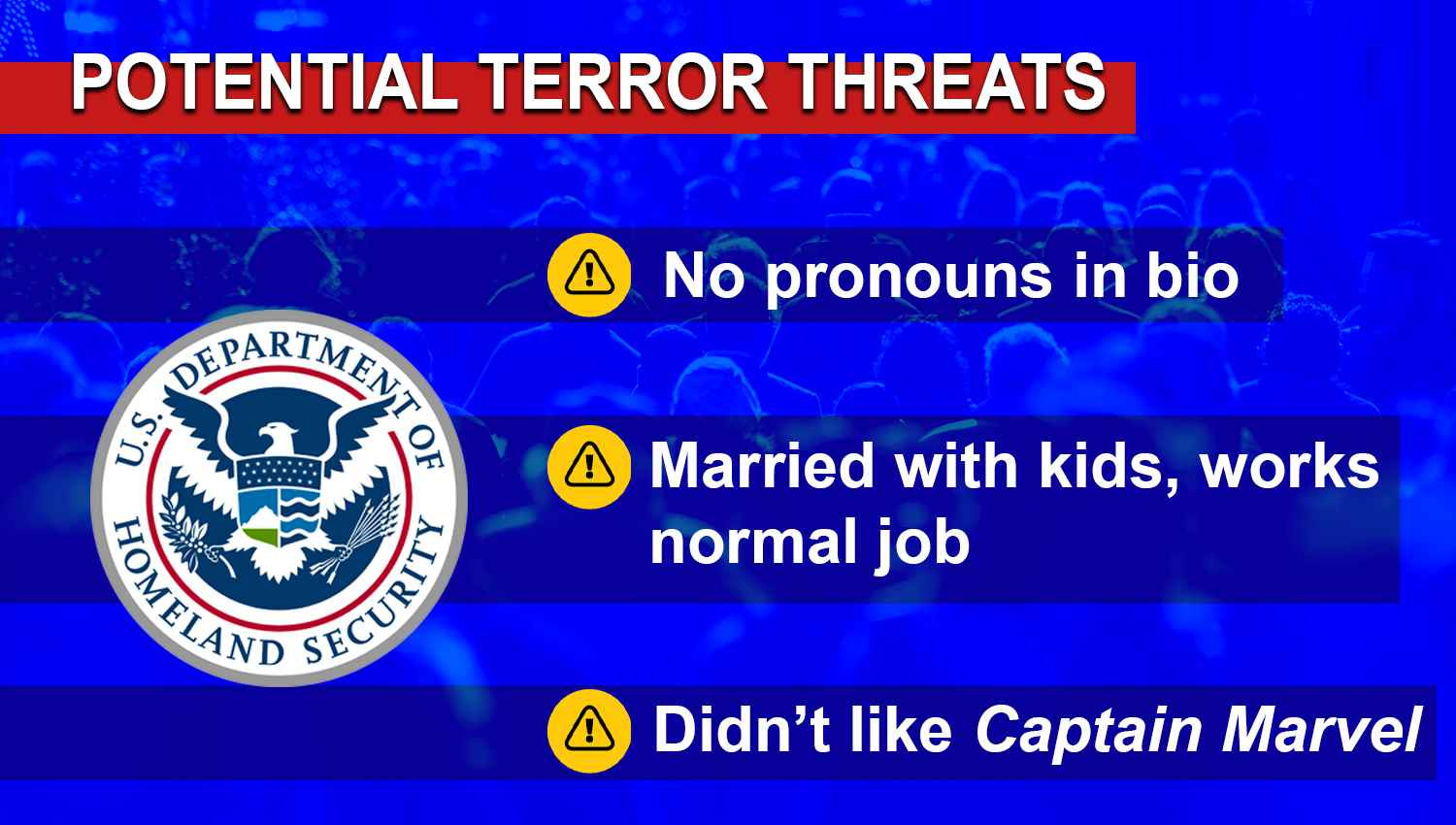 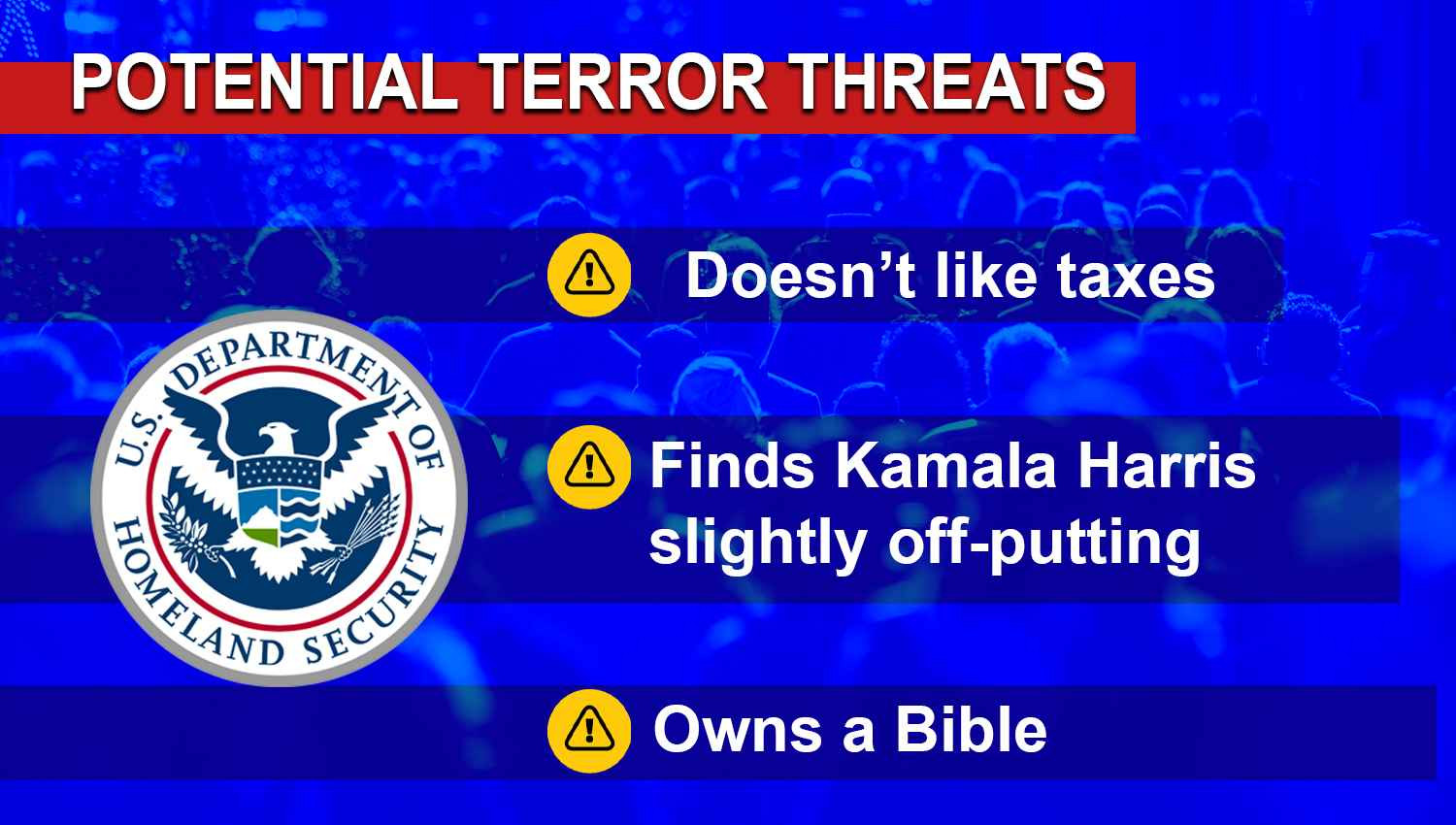 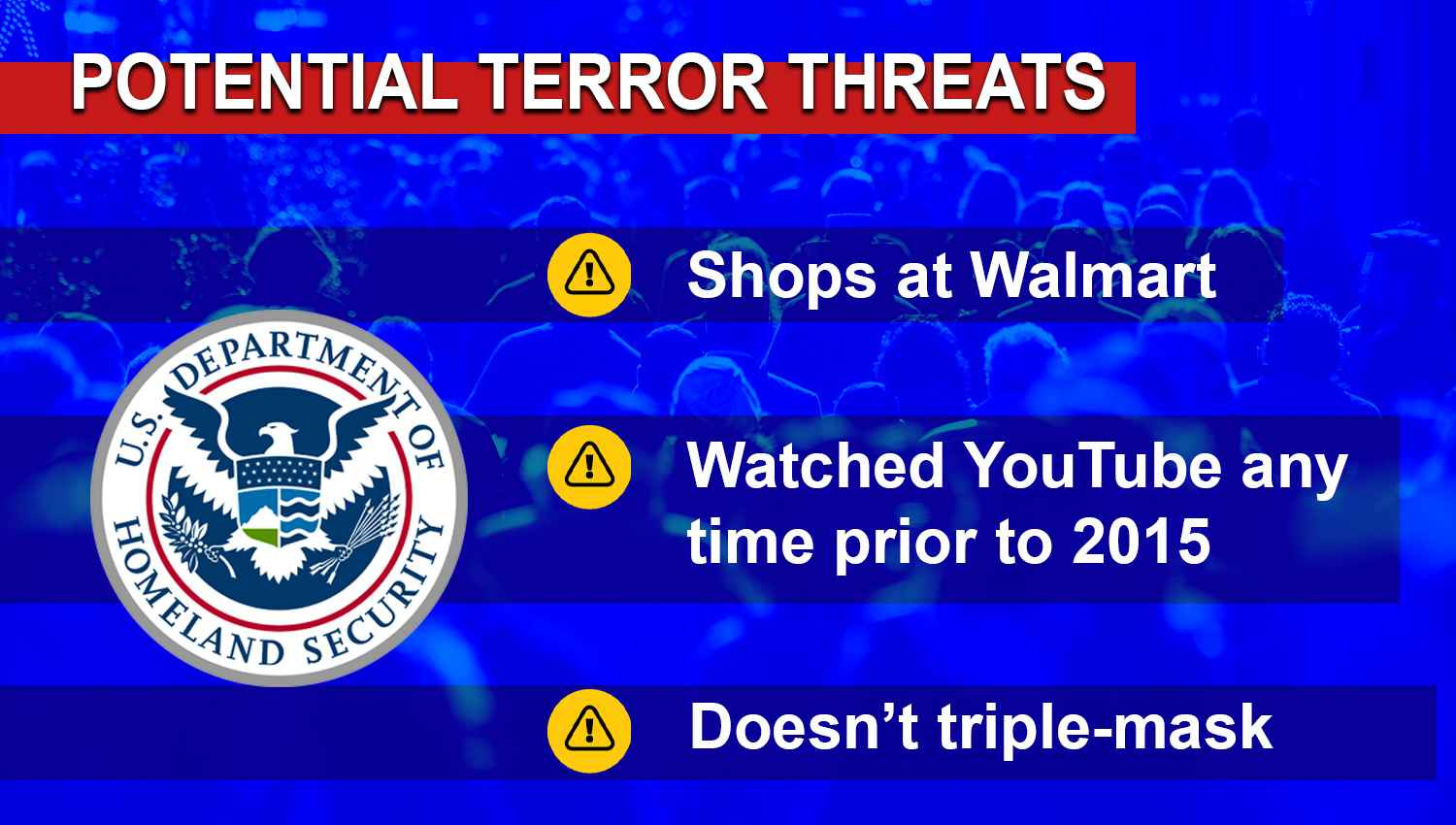 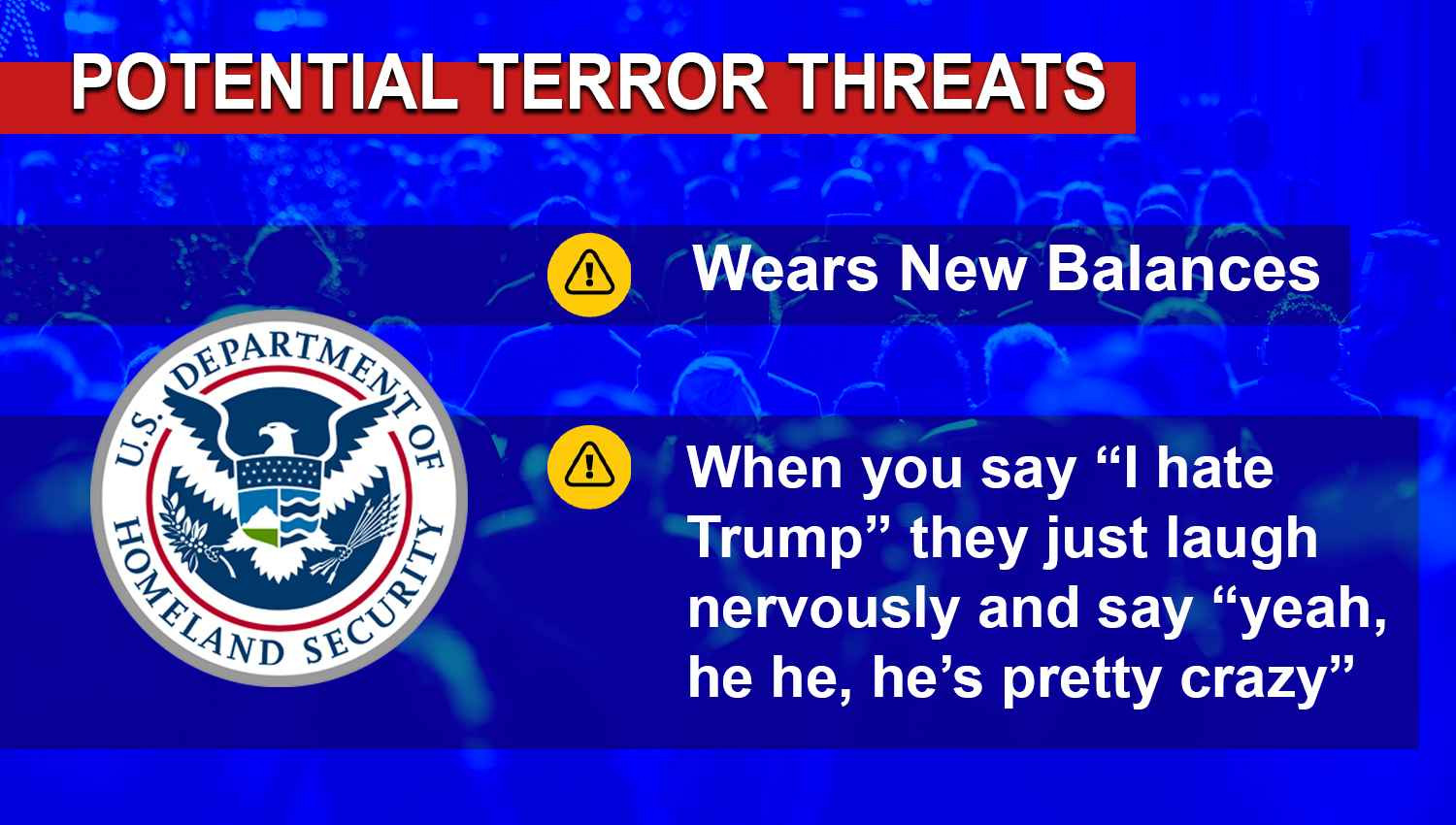 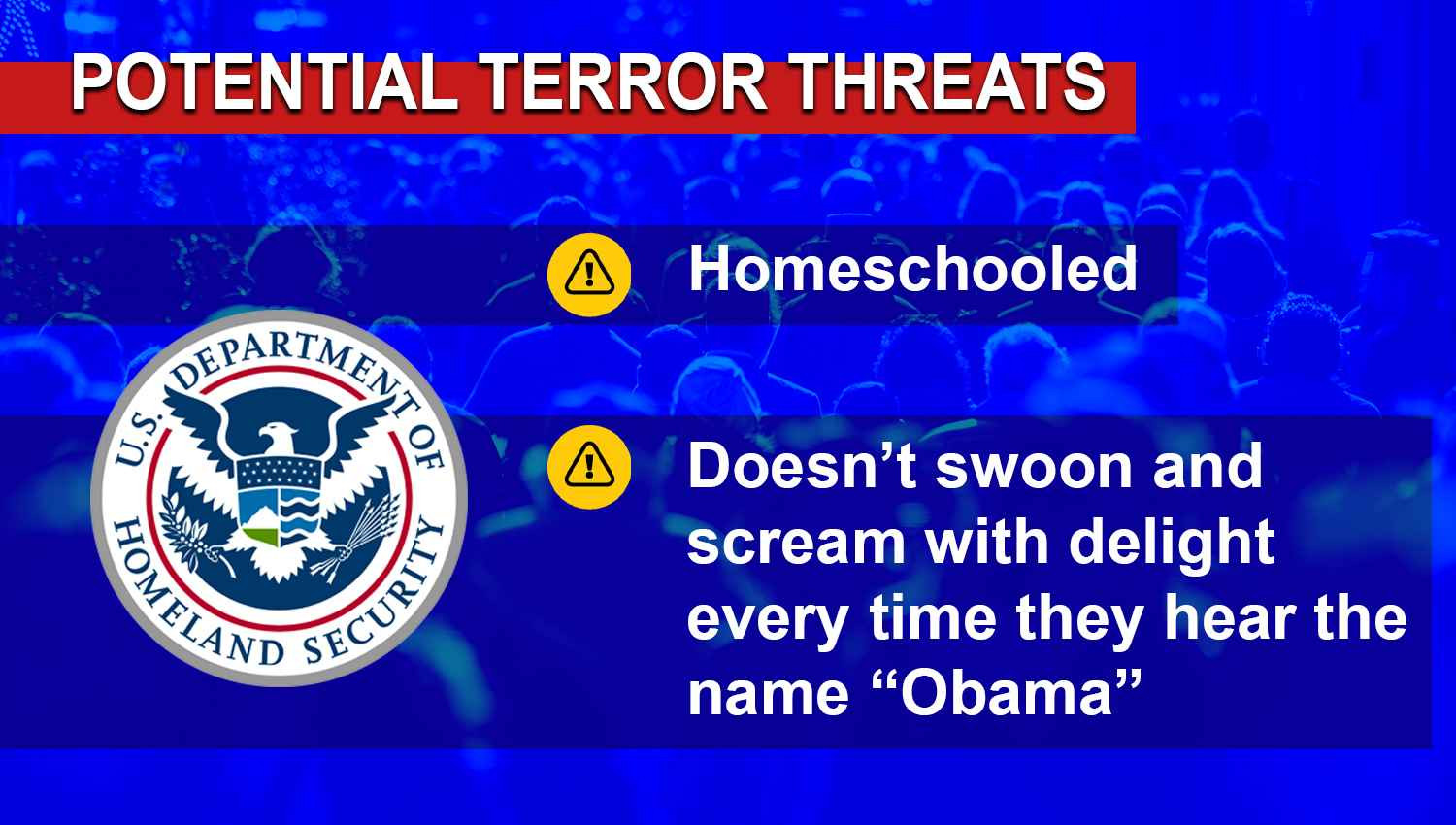 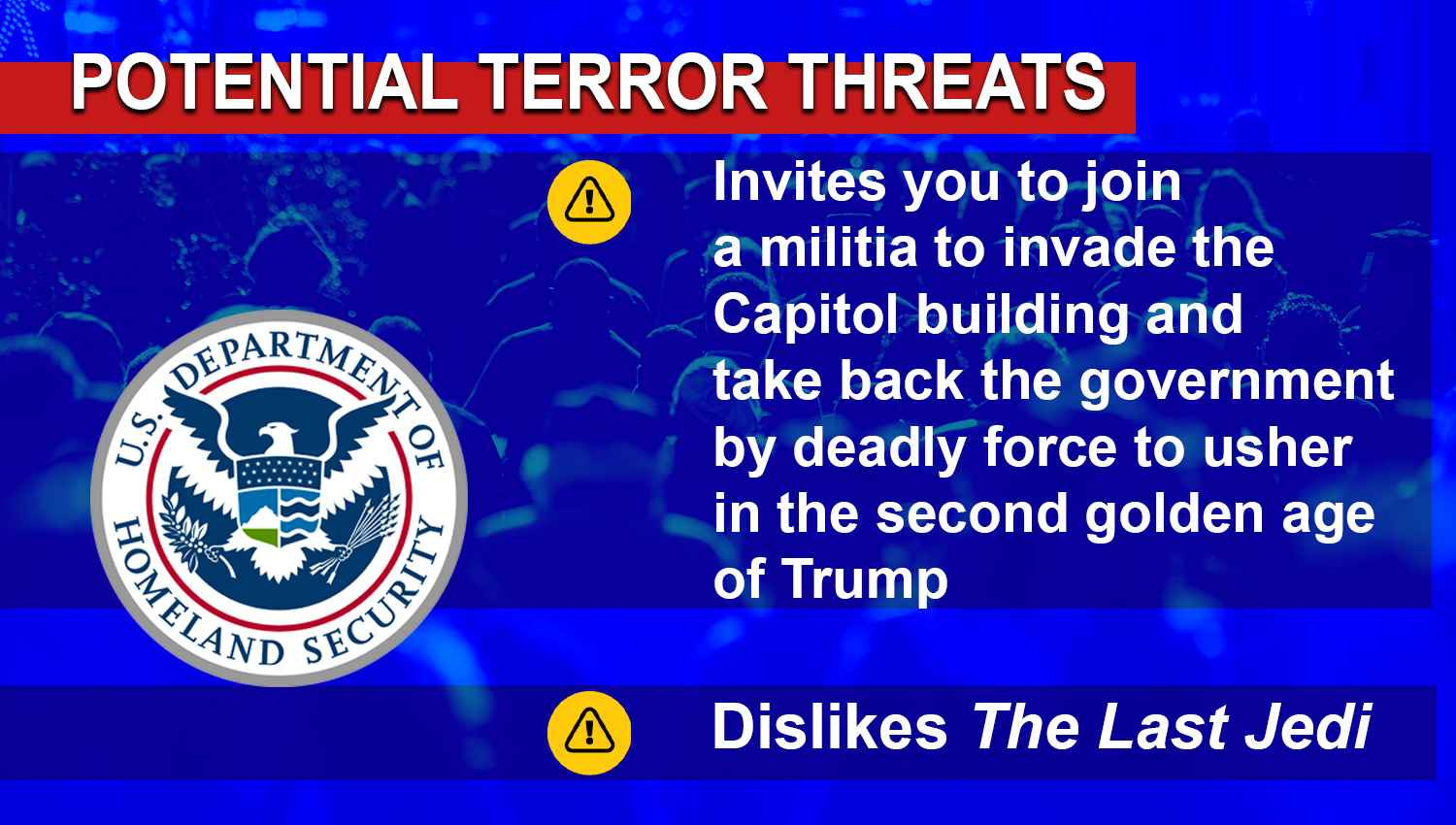 Does anyone you know fit any of these descriptions? They’re probably a terrorist. Be sure to notify federal authorities immediately.

How many people commit suicide by shooting themselves in the chest? Granted, suicidal people often aren’t thinking very clearly, but why would you do it in a way that doesn’t usually kill you instantly and inflicts a lot of pain before death? From Gary D. Barnett at lewrockwell.com:

A shocking crime was committed on the unscrupulous initiative of few individuals, with the blessing of more, and amid the passive acquiescence of all.

It seems due to the brainwashing of the American commoner, and the almost total indoctrination machine of the state that is used to dumb down the populace at large, that apathy has become so rampant as to allow the general acceptance of fallacious state narratives. These narratives that concern the very suspicious deaths of any that challenge the ruling class or their political puppets, and almost without question, seem to be never-ending these days. There are an unbelievable number of victims of so-called “apparent suicides,” assassinations, outright murder, disappearance, strange car crashes, poisonings, and any other number of unlikely death scenarios of those that have damning information about the state, its wars, and its secrets, and have the guts to tell the truth. Coincidence is no longer a reasonable argument concerning these deaths, and actually never has been legitimate.

This tragedy of mass acceptance of lies is based on a monstrous propaganda machine that has attained a level of false credibility that belies the imagination of any with the ability to think. In order to gain this advantage over the bulk of society, the state has spared no amount of money, power, or manipulation in order to be able to commit heinous crimes without fear of exposure. This requires not only the complicity of the state apparatus, but also the almost total control of all mainstream media as well. This could never have been achieved without the mind control efforts of the compulsory government schooling system, its monopoly over the children of this country, and its use of false curriculum meant to corrupt the population from an early age, breeding state worship, nationalism, and a belief in herd mentality.

END_OF_DOCUMENT_TOKEN_TO_BE_REPLACED

A Badge of Shame: The Government’s War on America’s Military Veterans, by John W. Whitehead

We send our military on pointless interventions and wars and when they get back home, they’re treated like shit. From John W. Whitehead at rutherford.org:

“For soldiers serving in Afghanistan and Iraq, coming home is more lethal than being in combat.” ― Brené Brown, research professor at the University of Houston

Not all heroes wear the uniform of war.

In the United States, however, we take particular pride in recognizing as heroes those who have served in the military.

Yet while we honor our veterans with holidays, parades, discounts at retail stores and restaurants, and endless political rhetoric about their sacrifice and bravery, we do a pitiful job of respecting their freedoms and caring for their needs once out of uniform.

Despite the fact that the U.S. boasts more than 20 million veterans who have served in World War II through the present day, the plight of veterans today is America’s badge of shame, with large numbers of veterans impoverished, unemployed, traumatized mentally and physically, struggling with depression, suicide, and marital stress, homeless, subjected to sub-par treatment at clinics and hospitals, and left to molder while their paperwork piles up within Veterans Administration offices.

Still, the government’s efforts to wage war on veterans, especially those who speak out against government wrongdoing, is downright appalling.

Consider: we raise our young people on a steady diet of militarism and war, sell them on the idea that defending freedom abroad by serving in the military is their patriotic duty, then when they return home, bruised and battle-scarred and committed to defending their freedoms at home, we often treat them like criminals merely for having served in the military.

END_OF_DOCUMENT_TOKEN_TO_BE_REPLACED

The Department Of Homeland Security Plans To Compile A List Of All Bloggers, Journalists And “Social Media Influencers”, by Michael Snyder

If you’re afraid of running afoul of the government, SLL is not the site you should be visiting. We’ll see if SLL makes the list, in the unlikely chance that DHS releases it publicly. From Michael Snyder at endoftheamericandream.com:

Many were hoping that once Barack Obama was out of office we would see less of this Big Brother surveillance nonsense, but instead it seems to be getting even worse.  In fact, the Department of Homeland Security has just announced that it intends to compile a comprehensive list of hundreds of thousands of “journalists, editors, correspondents, social media influencers, bloggers etc.”, and collect any “information that could be relevant” about them.  So if you have a website, an important blog or you are just very active on social media, the Department of Homeland Security is going to put you on a list and will start collecting information about you.  The DHS has already announced that it will hire a contractor to aid in monitoring media coverage, and they will definitely need plenty of help because it is going to be a very big job…

As part of its “media monitoring,” the DHS seeks to track more than 290,000 global news sources as well as social media in over 100 languages, including Arabic, Chinese and Russian, for instant translation into English. The successful contracting company will have “24/7 access to a password protected, media influencer database, including journalists, editors, correspondents, social media influencers, bloggers etc.” in order to “identify any and all media coverage related to the Department of Homeland Security or a particular event.”

“Any and all media coverage,” as you might imagine, is quite broad and includes “online, print, broadcast, cable, radio, trade and industry publications, local sources, national/international outlets, traditional news sources, and social media.”

I run several prominent websites including The Most Important News and The Economic  Collapse Blog, and so without a doubt I will be on this list.  And if I was just a name on a list in some database somewhere, that would be bad enough, but instead it sounds like the DHS will be collecting any “information that could be relevant” about all of us…

As Gizmodo noted, the DHS’ vagueness is also a concern. It leaves itself an opening for collecting “any other information that could be relevant” about these influencers, and there’s no hint as to what that could be. Is it strictly functional information like work histories, or sensitive data that could be abused? Either way, the database could be troublesome for bloggers and social media stars who aren’t usually under such close government scrutiny.

To continue reading: The Department Of Homeland Security Plans To Compile A List Of All Bloggers, Journalists And “Social Media Influencers”

The Surveillance State: An Inexorable March Toward Totalitarianism, by Jeremiah Johnson

The surveillance state gets creepier and creepier, and it’s even creepier in China. From Jeremiah Johnson at shtfplan.com:

Gizmodo released an article entitled “US Homeland Security Wants Facial Recognition to Identify People in Moving Cars,” on 11/2/17 by Matt Novak. The Surveillance State has slowed down its rate of growth since the President took office, however, it has not halted that growth. Instead, it lies festering below the veneer of daily events, inexorably growing its tentacles and extending their reach. Akin to an infestation of weeds, the roots are deep within the fabric of our communications networks: telephones, CCTV (Closed-Circuit Television) cameras, the Internet…all are thoroughly permeated.

Here is an excerpt from that article:

The proposed program would allow Homeland Security to maintain a database of everyone who leaves and enters the US that would now include photos taken by spying robot-cameras at every border crossing. Not only does DHS want this new facial recognition program to work without anyone having to exit their vehicle, the agency wants it to work even if the travelers are wearing things like sunglasses and hats. DHS also wants it to work without cars having to stop.

Seems they really want our information for their database. There is something more. One of the readers on the article’s website who uses the handle “Artiofab” posted this comment that is important, as he lives on the Texas border with Mexico:

“11/02/17 12:31pm  Hi everybody I live near the US-MX border so I’m happy to give informed opinions on this topic, since I know that a lot of the audience at Gizmodo dot com apparently lives closer to the US-CA border.

Near the US-MX border along major US highways there are these interior checkpoints. If you’re traveling “into” the US (e.g., if you’re in New Mexico and you’re driving north) you stop your car, a USBP agent asks if you’re all US citizens, you say yes, they let you keep going.

To continue reading: The Surveillance State: An Inexorable March Toward Totalitarianism