As long as Russia and the US can wipe each other out with nuclear weapons, Russia’s vaunted hypersonic weapons don’t really change the strategic calculus. From Michael Brenner at consortiumnews.com:

The West is out of practice when it comes to serious strategic appraisal of the U.S.-Russian arms race, writes Michael Brenner. 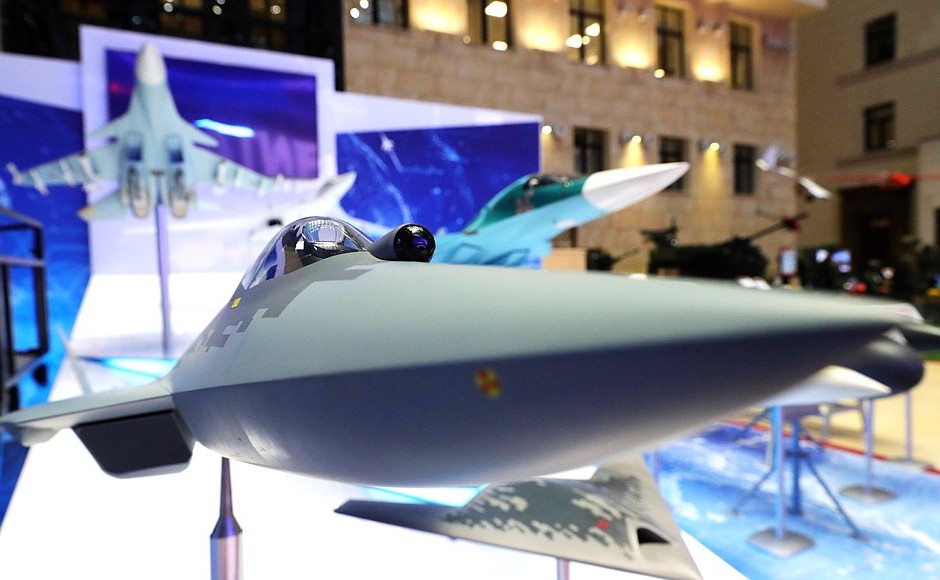 Part of an exhibition of advanced weapons and equipment that President Vladimir Putin visited in December 2019. (The Kremlin)

Deployment of Russia’s hyper-sonic missiles is causing heartburn in the West. Media headline the news as a dramatic breakthrough on a par with the first Sputnik. “Experts” are rushed into play like those self-styled pundits pronouncing when the initial exit polls appear on Election Day. Pentagon officials assure us that the United States is at the top of the nuclear game and able to respond to (if not exactly match) anything that the Russians can put out there.

Ninety eight percent of all this instant reaction is “fog-horning.” It simply signals that something big and important is out there even though we don’t have a clear picture of its actual shape or dimensions — or its significance. That’s normal. What counts is moving swiftly to the “searchlight” stage of close observation and hard thinking.

Whether analysts, official or otherwise, get there is problematic. We’re out of practice when it comes to serious strategic appraisal. After all, we’ve been flailing about in Afghanistan for almost two decades with no realistic aim or evaluation of the chances of achieving it by whatever means at whatever cost. The disorientation on Syria is even greater. There, we haven’t as much as figured out who are the “bad guys” and who are the “good guys” — except for ISIS.

END_OF_DOCUMENT_TOKEN_TO_BE_REPLACED

As of Dec. 26, Kim Jong Un’s “Christmas gift” to President Donald Trump had not arrived. Most foreign policy analysts predict it will be a missile test more impressive than any Pyongyang has yet carried off.

What is Kim’s game? What does Kim want?

He cannot want war with the United States, as this could result in the annihilation of the Kim family dynasty that has ruled North Korea since World War II. Kim is all about self-preservation.

What he appears to want in his confrontation with Trump is a victory without war. In the near-term, Kim seeks three things: recognition of his regime as the legitimate government of North Korea and its acceptance in all the forums of the world, trade and an end to all U.S. and U.N. sanctions, and a nuclear arsenal sufficient to deter a U.S. attack, including missiles that can strike U.S. bases in South Korea, Japan, Guam, and the Western Pacific. And he seeks the capability to deliver a nuclear warhead on the U.S. mainland.

Nor is this last goal unreasonable from Kim’s vantage point.

END_OF_DOCUMENT_TOKEN_TO_BE_REPLACED

Americans Are Ready for a Different Approach to Nuclear Weapons, by Lawrence Wittner

It’s been fifty years since “duck and cover” but people are still scared to death of nuclear weapons and nuclear war. Imagine that. From Lawrence Wittner at antiwar.com:

Although today’s public protests against nuclear weapons can’t compare to the major antinuclear upheavals of past decades, there are clear indications that most Americans reject the Trump administration’s nuclear weapons policies.

Moreover, the Trump administration has not only failed to follow the nuclear arms control and disarmament policies of its Democratic and Republican predecessors, but has plunged into a renewed nuclear arms race with other nations by championing a $1.7 trillion program to refurbish the entire U.S. nuclear weapons complex. Perhaps most alarming, it has again and againpublicly threatened to initiate a nuclear war.

END_OF_DOCUMENT_TOKEN_TO_BE_REPLACED

Did China Just Announce the End of U.S. Primacy in the Pacific? by Scott Ritter

First it was Russia and now it’s China coming up with weapons that can probably end US military hegemony. From Scott Ritter at theamericanconservative.com:

For decades, the United States has taken China’s ballistic missile capability for granted, assessing it as a low-capability force with limited regional impact and virtually no strategic value. But on October 1, during a massive military parade celebrating the 70th anniversary of the founding of the People’s Republic of China (PRC), Beijing put the U.S., and the world, on notice that this assessment was no longer valid.

In one fell swoop, China may have nullified America’s strategic nuclear deterrent, the U.S. Pacific Fleet, and U.S. missile defense capability. Through its impressive display of new weapons systems, China has underscored the reality that while the United States has spent the last two decades squandering trillions of dollars fighting insurgents in the Middle East, Beijing was singularly focused on overcoming American military superiority in the Pacific. If the capabilities of these new weapons are taken at face value, China will have succeeded on this front.

END_OF_DOCUMENT_TOKEN_TO_BE_REPLACED

Iran, Islam, and Banning the Bomb, by Ted Snider

Under Iran’s interpretation of the Koran, both chemical and nuclear weapons are forbidden by Allah. From Ted Snider at antiwar.com:

In 1982, Iraq changed the nature of their war on Iran. They began using chemical weapons. At first, it was only tear gas. But, within a year, Iraq was using mustard gas and the nerve agents sarin and soman on, not only Iranian soldiers, but Iranian civilians. The downpour of chemicals was prodigious: the Iraqis later confessed to UN inspectors that they had fired approximately 100,000 chemical weapons on Iran. The cost was tragic: 20,000 Iranians were killed by the chemicals and as many as 100,000 more suffered serious injuries from exposure.

Iran immediately implored the UN for help, but help never came. Though the Security Council refused to act, Secretary-General Javier Pérez de Cuéllar, acting alone, sent no less than six fact-finding missions to investigate. They consistently reported that Iraq was raining down chemical weapons on Iranians. Still, the UN did not act.

END_OF_DOCUMENT_TOKEN_TO_BE_REPLACED

Does Iran Already Have Nuclear Weapons? by Michael Snyder

Michael Snyder is never at a loss for things to worry about, but he raises a real possibility that Iran may already have nuclear weapons. From Snyder at endoftheamericandream.com:

What if what you have been told over and over again is not really the truth?  For weeks, the mainstream media has been telling us that Iran is getting dangerously close to having nuclear weapons.  And now that the Iranians have publicly admitted that their uranium stockpile has exceeded the limit set by the nuclear deal, there is a lot of buzz that either the United States or Israel may soon strike Iran in order to prevent their nuclear program from proceeding even further.  But of course once the missiles start flying, it is going to be just about impossible to stop a major war from erupting in the Middle East.  Before we get involved in such a war, we better make absolutely certain that Iran does not already have nuclear weapons, because a war with a nuclear-armed Iran could be absolutely cataclysmic.  If the Iranians felt that the survival of their regime was on the line, they would not hesitate to throw everything that they have at Israel and at U.S. forces in the region.  Unfortunately, very few people are talking about the well known evidence that Iran has had their hands on nukes for a long time.

In the immediate aftermath of the collapse of the Soviet Union, there was a mad scramble for the nuclear weapons that were being held by Kazakhstan and Ukraine.  According to former CIA spy Reza Kahlili, during that time period Iran received at least two nuclear warheads from Kazakhstan…

END_OF_DOCUMENT_TOKEN_TO_BE_REPLACED

The pathological haters of Iran in the US government hate for three dishonorable reasons. Iran kicked out the US’s puppet in 1979, Iran is conducting the oil trade in currencies other than the dollar, and Iran is a linchpin of the Belt and Road Initiative. From Pepe Escobar at consortiumnews.com:

Berlin, Paris and London assumed Tehran could not afford to leave the JCPOA even if it was not receiving any of the promised economic rewards.  Now the EU3 are facing the hour of truth, writes Pepe Escobar.

The Trump administration unilaterally cheated on the 2015 multinational, UN-endorsed JCPOA, or Iran nuclear deal. It has imposed an illegal, worldwide financial and energy blockade on all forms of trade with Iran — from oil and gas to exports of iron, steel, aluminum and copper. For all practical purposes, and in any geopolitical scenario, this is a declaration of war.

Successive U.S. governments have ripped international law to shreds; ditching the Joint Comprehensive Plan of Action is only the latest instance. It doesn’t matter that Tehran has fulfilled all its commitments to the deal — according to UN inspectors. Once the leadership in Tehran concluded that the U.S. sanctions tsunami is fiercer than ever, it decided to begin partially withdrawing from the deal.

President Hassan Rouhani was adamant: Iran has not left the JCPOA — yet. Tehran’s measures are legal under the framework of articles 26 and 36 of the JCPOA — and European officials were informed in advance. But it’s clear the EU3 (Germany, France, Britain), who have always insisted on their vocal support for the JCPOA, must work seriously to alleviate the U.S.-provoked economic disaster to Iran if Tehran has any incentive to continue to abide by the agreement. 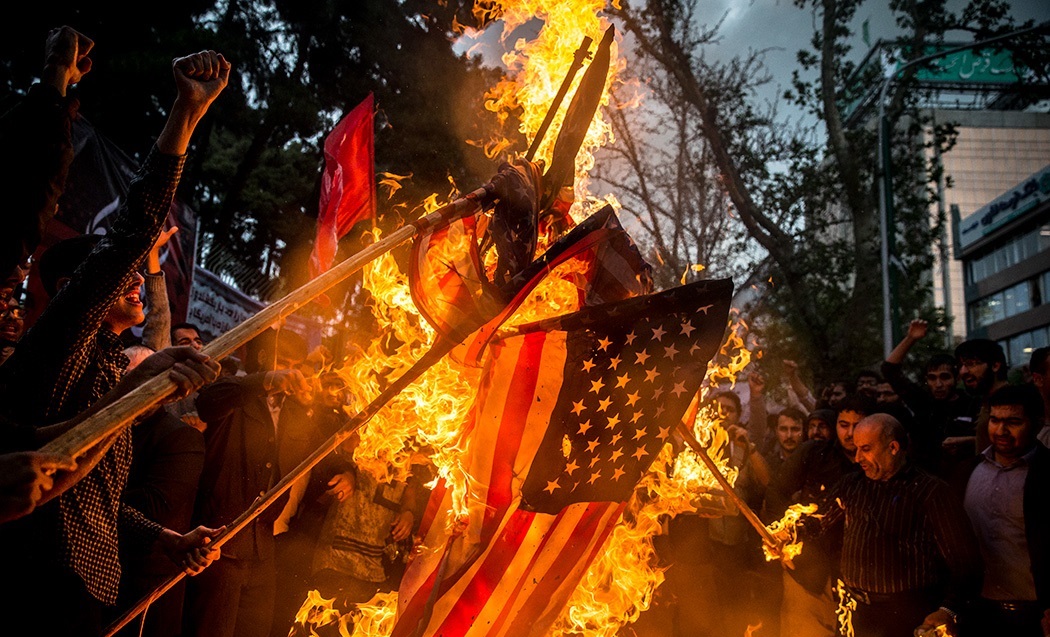 Protests in front of former U.S. embassy in Tehran after U.S. decision to withdraw from JCPOA, May 8, 2018. (Hossein Mersadi via Wikimedia Commons)