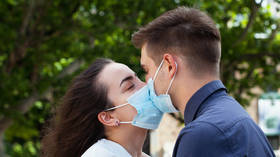 To turn males into females or vice versa, you have to change the chromosomes in every cell in the human body, at least 30 trillion cells. That’s not what’s going on in so-called sex change operations. From Vasko Kohlmayer at lewrockwell.com:

We have written earlier about the stolen election and the Great Struggle Session to which the American people are being subjected by the political left.

The stolen election is, however, only the latest agenda item in the left’s project of reality subversion.

Another whip with which the left has been painfully tormenting the American public for some years now is the so-called “trans” movement. Trans is an umbrella term for a body of assertions, notions and activities that strike most ordinary people as largely absurd. Perhaps the most shocking among them is the concept of transsexuality. This is the idea that boys can become girls and men can become women and vice versa.

The problem with this idea is that it is simply not possible for a person to change their sex. This is because our sex is hardwired into our person on the most fundament level of our physical existence.

As many may know, the sex of human beings is determined by their chromosomal make up. Chromosomes are microscopic packages of DNA that carry our genetic material and determine our physical characteristics, among other things.

XY is male and XX is female and never the twain shall meet, regardless of surgeries and hormones. That basic scientific fact poses problems for a political ideology which says anyone can be any gender they want to be. From Walter E. Williams at lewrockwell.com:

If you were a judge, would you sentence a criminal, who identifies as a female but has XY chromosomes, to a women’s prison? A judge just might do so. Judge William Pryor of the U.S. Court of Appeals for the Eleventh Circuit focused on a Florida school district ruling that a transgender “boy,” a person with XX chromosomes, could not be barred from the boys’ restroom. Pryor suggested students shouldn’t be separated by gender at all.

END_OF_DOCUMENT_TOKEN_TO_BE_REPLACED

Liberal Millennials, Not Surprisingly, Fail At Sex Too, by Kurt Schlichter

A fair number of millennials, male and female, regard males and masculinity as something deviant, criminal, and just plain wrong. Because no one’s figured out how to have children without males, this conception (pun intended) of men poses problems for procreation and the birth rate. From Kurt Schlichter at theburningplatform.com:

Now, the fact that millennials are failing to reproduce would superficially seem like a good thing, but it is probably a bad thing for society when the younger generation is more interested in Instagram and Fortniteand endless adolescence than in doing the hard work of making babies and, you know, perpetuating the species.

END_OF_DOCUMENT_TOKEN_TO_BE_REPLACED

There’s nothing like true love with a humanoid. Sex and you don’t need to lie the next morning. From Doug Casey at caseyresearch.com:

3D Hologroup has created an app that allows you to download virtual girlfriends. And you can interact with these girls if you own an augmented reality device.

So, I visited the company’s website. I discovered that you can choose which model of girl you’d like, just like you would a pair of shoes.

It reminded me of the hologram girlfriend that Ryan Gosling’s character had in Blade Runner 2049, which came out last year.

What do you make of this? Are you surprised that you can now buy a digital girlfriend with just a few clicks of a mouse?

Doug: It’s a vision of things to come. I don’t think most people know that this is happening. But it’s an inevitable implication of Moore’s Law, the observation made in 1965 by Gordon Moore that computer power would double about every two years. But it’s not just computers; technology is advancing at that rate in a number of areas. Augmented reality is just one example. Artificial intelligence, robotics, genetic engineering, and nanotech are also advancing extremely rapidly.

It seems to me that we’re likely to see the Singularity within the next generation, just as Ray Kurzweil predicted. Among many other strange things, we’ll have humanoids and androids that will be increasingly hard to distinguish from actual people.

You’ll also be able to have your own Mr. (or Miss) Data, the android from Star Trek: The Next Generation. Albeit a relatively low-functioning version. This will have immense societal implications on how society will function, and how people relate to each other.

Of course, that’s 20 or 25 years from now, and there will be many steps along the way. But one thing you won’t have to wait long for is artificial reality suits. You’ll be able to step into one and experience an alternate reality: sight, smell, touch, hearing, and even taste I suppose. It will be vastly more involving than watching a movie…

Down With Sex! by James Howard Kunstler

The current American preoccupations with sex and gender reflect a decaying, decadent society. From James Howard Kunstler at kunstler.com:

It’s interesting to see how, in a culture so pornified that any nine-year-old can watch sex acts on-screen all the live-long day, we discover that decorum is absent in American life. This, at the same time that the more Gnostic political Leftists want to transform human nature by erasing sexual categories in their quest to create a utopia of hermaphrodites.

Sex is bothersome, you know. It comes between people literally and rather awkwardly, and it is fraught with tensions so primitive that it can frighten and shame us. Is it any wonder that these tensions will manifest in a workplace where men and women spend their waking hours? Are you really surprised that sexual attraction is a currency for advancement? That it tends toward the naked exchange of favors?

I’d submit that the wreck of Harvey Weinstein is a dramatic representation of collapse of the movie industry as we’ve known for nearly a century. The two-hour motion picture exhibited in a large room with a lot of seats is in its death throes. It joins the long-playing album of recorded music and the book-length literary exercise called the novel in the elephants’ graveyard of art-forms. The fall of HW is just the period at the end of the sentence.

The past month has been a bloodbath for the theatrical release of movies. Supposed blockbusters are being pulled from the empty cineplexes like guest speakers from the college lecture halls. The struggling middle-class doesn’t need movie theaters anymore, and the flat-screens at home enable them to get lost in whole fictional worlds that grind on in weekly episodes year after year like so much bratwurst. Who knows how long that phase of show biz will last. In evolution, remember, the climactic form of an organism is often supersized. Think: Baluchitherium, titan of the Oligocene land mammals. (And imagine sex between two creatures the size of tractor-trailer trucks!) The fate of television “content” like Game of Thrones probably depends on the fitness of an electric grid that is looking pretty sclerotic these days. Personally, I think the show-biz of the future will tend toward puppet shows.

To continue reading: Down With Sex!

The difference between sex and love is that sex relieves tension and love causes it.