The brutal crackdown in Catalonia, by William McGee

The powers that be have a favorite response to insurrectionists: violence. From William McGee at spiked-online.com:

The Spanish state’s repression of protests is pouring gasoline on the separatist fire.

One would have thought the Spanish state would have wanted a bit of positive PR after its missteps two years ago. The world was shocked when voters, including the elderly, were beaten with batons and dragged away from polling stations by overzealous policemen sent in to quash the independence referendum. The Spanish state rightly received widespread condemnation for its heavy-handedness. However, two years later, it does not seem to have learned anything from this.
Since the latest wave of protests erupted, Amnesty International has condemnedthe Spanish police’s use of excessive force and its deployment of anti-riot equipment and munitions. Officers have used batons on peaceful and subdued protesters. Four protesters have so far lost eyes from rubber bullets fired at close range. One protester required surgery after receiving a shot to the testicles. Officially, these bullets are banned in the region.

END_OF_DOCUMENT_TOKEN_TO_BE_REPLACED

This is a good overview of the situation in Catalonia, where there have been massive protests over the sentences handed down to the leaders of the movement that tried to put Catalonian independence on the ballot.. From Sebastiaan Faber and Bécquer Seguín at thenation.com: 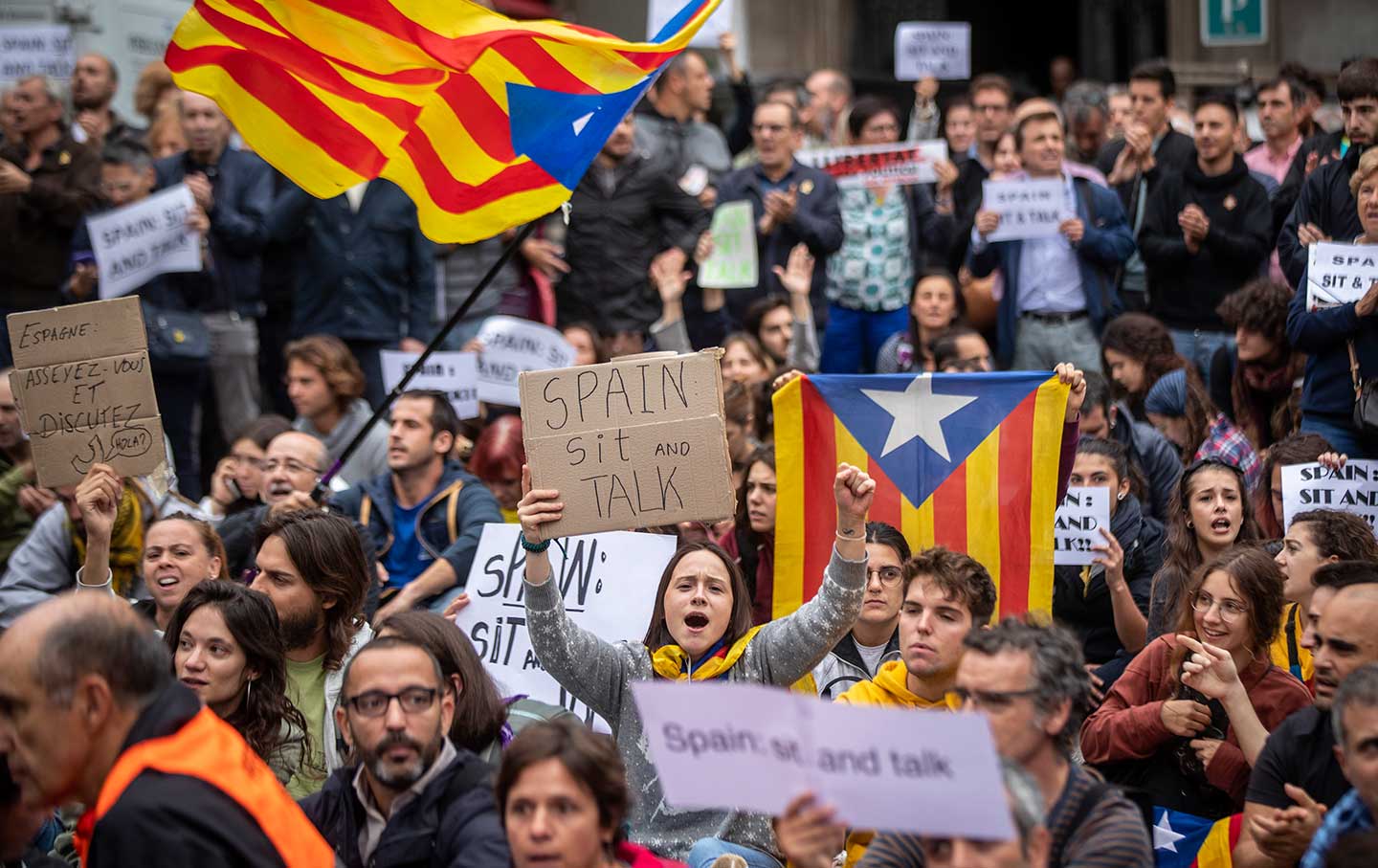 Now that the verdict’s out, it’s time to start getting along,” Spanish Prime Minister Pedro Sánchez said at a press conference on October 18, repeating the rhyme—“después de la sentencia, convivencia”—as if it were a magic spell. Around the same time, half a million Catalans were converging on Barcelona, which for the previous four days had seen its airport occupied and highways blocked while violent clashes between protesters and riot police were increasing in intensity each night. Sánchez insisted on framing these clashes as an internal Catalan problem. “What’s at stake is not the territorial makeup of our country, but the Catalans’ ability to get along with each other,” he’d said a few days earlier. One week of major protests, it appears, did not shake his government’s unwillingness to face reality: The Catalan crisis is something that affects the entire country, and it is far from over.

END_OF_DOCUMENT_TOKEN_TO_BE_REPLACED

Is Democracy a Dying Species? by Patrick J. Buchanan

If democracy is a dying species, what follows? From Patrick J. Buchanan at buchanan.org:

What happens when a majority or militant minority decide that the constitutional rights of free speech, free elections, peaceful assembly and petition are inadequate and take to the streets to force democracy to submit to their demands?

Our world may be about to find out.

Chile is the most stable and prosperous country in Latin America.

Yet when its capital, Santiago, recently raised subway fares by 5%, thousands poured into the streets. Rioting, looting, arson followed. The Metro system was utterly trashed. Police were assaulted. People died. The rioting spread to six other cities. Troops were called out.

END_OF_DOCUMENT_TOKEN_TO_BE_REPLACED

Believe it or not, using the term “Islamist” is the issue in a hate speech trial in Spain. From Soeren Kern at gladstoneinstitute.org:

Spanish prosecutors have opened a criminal investigation to determine whether the secretary general of Vox, a fast-rising Spanish populist party, is guilty of hate speech for warning of an “Islamist invasion.”

END_OF_DOCUMENT_TOKEN_TO_BE_REPLACED

Salvini: “Italy Will No Longer Accept Refugees” As Spain Volunteers, by Tyler Durden

Italy has decided to play hardball with refugees. From Tyler Durden at zerohedge.com:

Over the weekend, Italy once again roiled Europe, only this time not with its plunging bonds but with its drastic shift in immigration politics, when the country’s new populist leader, Matteo Salvini, now operating as Minister of the Interior, made good on his warning last weekend that “the good times for illegals are over”, writing an urgent letter ordering Malta to accept a ship carrying 629 shipwrecked North African migrants currently sitting off the Italian coast – calling Malta the “safest port” for the passengers, and advising that Rome will no longer offer refuge.

The Italian message to Europe was simple: having been the port of landing for tens of thousands of migrants in the past two years, Rome would no longer accept boat after boat of North African (or middle eastern) refugees.

Italy’s vocal resistance to accepting further migrants even prompted prominent globalist George Soros, the person many have accused of being behind Europe’s forced migration patterns, to urge the EU to compensate Italy for the 100,000+ migrants landing there, noting that the strong showing of far-right parties partly is due to Europe’s ‘flawed’ migration policies.

As for Italy’s “suggestion” that the Mediterranean island of Malta accept the migrants, not surprisingly it fell on deaf ears.

But if Italy (and Malta) would no longer accept migrants, and with Merkel’s “open door” policies in Germany now a taboo, the question remained: who would accept the countless boats of migrants still headed for Europe?

Moments ago we got the answer when that “other” PIIG, Spain, offered on Monday to take in the rescue ship MV Aquarius, that has been drifting in the Mediterranean sea with 629 migrants stranded on board after Italy and Malta refused to let it dock.

Spain’s Prime Minister Pedro Sanchez, who took office just over a week ago, has given instructions for the boat to be admitted to the eastern port of Valencia, his office said in a statement.

To continue reading: Salvini: “Italy Will No Longer Accept Refugees” As Spain Volunteers

Italy, the ESB and Europe’s Populist Fantasyland, by Daniel Lacalle

There is no law that says a government has to live beyond its means and go into debt, even though that’s what most of them do. From Daniel Lacalle at dlacalle.com:

The populist coalition in Italy has presented an “economic” program and a threat to the European Union that makes Greece look like a walk in the park.

Let us start with reality.

Italy’s economic problems are self-inflicted, not due to the Euro.

Because of this, government spending continued to rise well above revenues. As Italy -like Spain and Portugal- decided to penalize high-productivity sectors with rising taxes, revenues fell short, while expenditures continued to rise. Italy, like so many peripheral countries, created a massive “crowding out” effect of the public sector against the private. It is not a coincidence that most citizens in Italy, like Spain or Portugal, prefer to be civil servants than entrepreneurs.

It is no wonder that, while private companies managed to survive and improve “despite government”, debt and non-performing loans soared.

Now they blame the Euro. As if the same crowding out would not have happened outside.  The only difference is that outside the Euro the government would have destroyed savers and citizens through constant “competitive devaluations” that were the cause of the economic weaknesses of the past. Constant devaluations did not make Italy, Spain or Portugal more competitive, they made them perennially poor and perpetuated their imbalances.

To continue reading: Italy, the ESB and Europe’s Populist Fantasyland

This is the End of the Euro, by Raúl Ilargi Meijer

The real mystery is how they’ve been able to keep the euro going as long as they have. From Raúl Ilargi Meijer at theautomaticearth.com:

The Spanish government is about to fall after the Ciudadanos party decided to join PSOE (socialist) and Podemos in a non-confidence vote against PM Rajoy. Hmm, what would that mean for the Catalan politicians Rajoy is persecuting? The Spanish political crisis is inextricably linked to the Italian one, not even because they are so much alike, but because both combine to create huge financial uncertainty in the eurozone.

Sometimes it takes a little uproar to reveal the reality behind the curtain. Both countries, Italy perhaps some more than Spain, would long since have seen collapse if not for the ECB. In essence, Mario Draghi is buying up trillions in sovereign bonds to disguise the fact that the present construction of the euro makes it inevitable that the poorer south of Europe will lose against the north.

Club Med needs a mechanism to devalue their currencies from time to time to keep up. Signing up for the euro meant they lost that mechanism, and the currency itself doesn’t provide an alternative. The euro has become a cage, a prison for the poorer brethren, but if you look a bit further, it’s also a prison for Germany, which will be forced to either bail out Italy or crush it the way Greece was crushed.

Italy and Spain are much larger economies than Greece is, and therefore much larger problems. Problems that are about to become infinitely more painful then they would have been had the countries been able to devalue their currencies. If you want to define the main fault of the euro, it is that: it creates problems that would not have existed if the common currency itself didn’t. This was inevitable from the get-go. The fatal flaw was baked into the cake.

And if you think about it, today the need for a common currency has largely vanished anyway already. Anno 2018, people wouldn’t have to go to banks to exchange their deutschmarks or guilders or francs, they would either pay in plastic or get some local currency out of an ATM. All this could be done at automatically adjusting exchange rates without the use of all sorts of middlemen that existed when the euro was introduced.

To continue reading: This is the End of the Euro