The Fentanyl Crisis: Brought To You By Drug Prohibition, by Brian McGlinchey

The war on drugs will never be won. From Brian McGlinchey at starkrealities.substack.com:

As drug overdoses continue rising in the United States, one drug has emerged as the most notorious killer of our day: fentanyl. Unfortunately, those clamoring loudest about fentanyl’s death toll support policies that actually bolster its position in the illicit drug trade.

First approved for U.S. medical use in 1968, fentanyl is a synthetic opioid used to counter severe pain after surgery, and chronic severe pain. Though similar to morphine or heroin, it’s 50 to 100 times more potent.

Most of the fentanyl circulating on the streets doesn’t come from pharmaceutical companies. According to the DEA, black market fentanyl is “primarily manufactured in foreign clandestine labs and smuggled into the United States through Mexico.” China is a major source of its chemical ingredients and some finished product too.

As with other black-market knock-offs, the inconsistency of illicit fentanyl makes it more dangerous. Worse, it’s often laced into other drugs, including cocaine, heroin, marijuana and counterfeit pills disguised as pharmaceutical-grade Oxycontin, Xanax, and Adderall.

Though its effect varies by a user’s size and tolerance, ingesting just 2 milligrams can be fatal. That fact lends itself to jolting descriptions of fentanyl’s lethality by public officials, pundits and click-chasing media. A recent Fox News headline is just one of countless examples of fentanyl sensationalism: “Colorado State Patrol seizes enough fentanyl to kill 25 million people.”

The War on Drugs shredded the Fourth Amendment. The Ukraine-Russia war is shredding the Fifth amendment. From Andrew Napolitano at lewrockwell.com:

Most judges and lawyers agree that the war on drugs in the past 50 years has seriously diminished the right to privacy guaranteed by the Fourth Amendment.

Now a small group of legal academics is arguing that the war in Ukraine should be used to diminish property rights guaranteed by the Fifth Amendment.

The Fourth Amendment was written to guarantee that the government may only search and seize persons, houses, papers and effects pursuant to a search warrant issued by a judge after the presentation under oath of evidence demonstrating that the place to be searched more likely than not contains evidence of crime. And the warrant itself must specifically describe the place to be searched and the person or thing to be seized.

These requirements — the work of James Madison, who was the scrivener of the Constitution in 1787 and the author of the Bill of Rights in 1791 — were intended to have two effects.

The Most Shameful Conservative Attack on Drug Legalization, by Laurence M. Vance

Never mistake a conservative for someone who’s abiding passion is freedom. From Laurence M. Vance at lewrockwell.com:

Beford is the author of the article “Drug Legalization Is a Disaster, and Your Leaders Don’t Care About You,” published by The Federalist.

I had actually never heard of Bedford until I came across his article. According to his bio:

Christopher Bedford is a senior editor at The Federalist, the vice chairman of Young Americans for Freedom, a board member at the National Journalism Center, and the author of The Art of the Donald. His work has been featured in The American Mind, National Review, the New York Post and the Daily Caller, where he led the Daily Caller News Foundation and spent eight years. A frequent guest on Fox News and Fox Business, he was raised in Massachusetts and lives on Capitol Hill.

Let’s begin at the beginning with the title: “Drug Legalization Is a Disaster, and Your Leaders Don’t Care About You.” Just the title is enough to dismiss this article as the ravings of an incorrigible drug warrior.

The Drugging of American Politics, by Alfred McCoy

The war on drugs has also been a war on disfavored groups, particularly blacks. From Alfred McCoy at consortiumnews.com:

Fifty years ago, on June 17, 1971, President Richard Nixon stood before the White House press corps, staffers at his side, to announce “a new, all-out offensive” against drug abuse, which he denounced as “America’s public enemy number one.” He called on Congress to contribute $350 million for a worldwide attack on “the sources of supply.” The first battle in this new drug war would be fought in South Vietnam where, Nixon said, “a number of young Americans have become addicts as they serve abroad.”

While the president was declaring his war on drugs, I was stepping off a trans-Pacific flight into the searing tropical heat of Saigon, the South Vietnamese capital, to report on the sources of supply for the drug abuse that was indeed sweeping through the ranks of American soldiers fighting this country’s war in Vietnam.

As I would soon discover, the situation was far worse than anything Nixon could have conveyed in his sparse words. Heroin vials littered the floors of Army barracks. Units legendary for their heroism in World War II like the 82nd Airborne were now known as the “jumping junkies.” A later survey found that more than a third of all GIs fighting the Vietnam War “commonly used” heroin. Desperate to defeat this invisible enemy, the White House was now about to throw millions of dollars at this overseas drug war, funding mass urinalysis screening for every homeward-bound GI and mandatory treatment for any who tested positive for drugs.

The Destruction of American Liberty, by Jacob G. Hornberger

Americans are not free, not even close. From Jacob G. Hornberger at fff.org:

The terrorist attacks on the World Trade Center and the Pentagon on September 11, 2001, were a watershed event for the United States, not only because of the large death toll and property destruction but, more important, because they spelled the death knell for American liberty.

Americans had already lost a large portion of their freedom when the federal government was converted into what is called a “welfare state,” a governmental system that is based on the concept of mandatory charity. Examples of mandatory-charity programs include Social Security, Medicare, Medicaid, farm subsidies, education grants, corporate bailouts, foreign aid, and every other program by which the government takes money from people to whom it belongs and gives it to people to whom it does not belong.

END_OF_DOCUMENT_TOKEN_TO_BE_REPLACED

The suggestion to send US troops to Mexico to fight drug cartels combines the worst features of the war on drugs and the war on terrorism. From Ron Paul at ronpaulinstitute.org:

The 50-year US war on drugs has been a total failure, with hundreds of billions of dollars flushed down the drain and our civil liberties whittled away fighting a war that cannot be won. The 20 year “war on terror” has likewise been a gigantic US government disaster: hundreds of billions wasted, civil liberties scorched, and a world far more dangerous than when this war was launched after 9/11.

So what to do about two of the greatest policy failures in US history? According to President Trump and many in Washington, the answer is to combine them!

Last week Trump declared that, in light of an attack last month on US tourists in Mexico, he would be designating Mexican drug cartels as foreign terrorist organizations. Asked if he would send in drones to attack targets in Mexico, he responded, “I don’t want to say what I’m going to do, but they will be designated.” The Mexican president was quick to pour cold water on the idea of US drones taking out Mexican targets, responding to Trump’s threats saying “cooperation, yes; interventionism, no.”

END_OF_DOCUMENT_TOKEN_TO_BE_REPLACED

Did President Trump think about consequences for even a nanosecond before he proposed sending US troops to Mexico to fight the drug war? From Fred Reed at unz.com:

Another Entry in the Tourney of Damn Fool Ideas

I suppose that by now everyone has heard of Trump’s offer to send the American military to “wage WAR on the drug cartels and wipe them off the face of the earth,” which he asserts can be done “quickly and effectively. “

Trump phrased this as an offer to help, not a threat to invade, which is reassuring. AMLO, Mexico’s president, wisely declined the offer.

While the President seems to have made the offer in good faith, he has little idea of Mexico, the military, or the cartels. The American military could not come close to wiping them off the face of the earth, much less effectively and quickly. Such an incursion would be a political and military disaster. The President needs to do some reading.

END_OF_DOCUMENT_TOKEN_TO_BE_REPLACED

I’m Jealous of the Death Row Inmates, by David Gornoski

A prisoner, apparently not unique, is in jail for life without possibility of parole for a marijuana violation. From David Gornoski a lewrockwell.com:

The following is an article by Craig J. Cesal, a federal prisoner sentenced to life without the possibility of parole as a first-time offender convicted of conspiring to distribute marijuana.

I am a first-time offender convicted of conspiracy to distribute marijuana. In 2002, my Chicagoland truck repair facility serviced semis a Florida company used to haul marijuana. I never bought or sold marijuana, never received proceeds from marijuana marketing, and didn’t even smoke marijuana. By operation of the War on Drugs, I am sentenced to life imprisonment without the possibility of parole, even though no person was hurt, and marijuana is legal in some form throughout thirty-three states.

END_OF_DOCUMENT_TOKEN_TO_BE_REPLACED

Another war that Democratic candidate Tulsi Gabbard questions is the drug war. From John Stossel at theburningplatform.com: 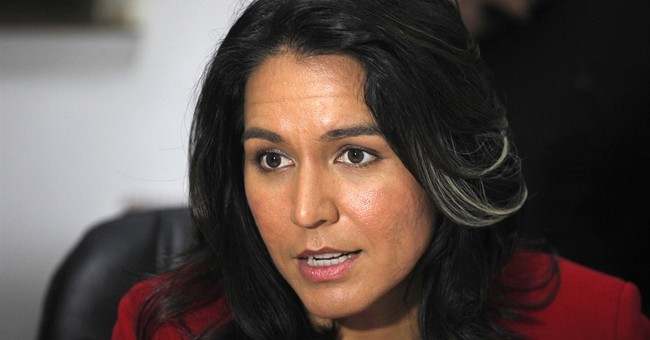 She says the U.S. should talk to its enemies. She was criticized for meeting with Syrian dictator Bashar Assad.

But Democrats were supposed to be the anti-war party, I say to her in my newest video.

“They’re heavily influenced by a foreign policy establishment … whose whole power base is built around continuing this status quo,” Gabbard tells me. “So much so, to the point where when I’m calling for an end to these wasteful wars, they’re saying, ‘Well, gosh, Tulsi, why are you such an isolationist?’ As though the only way that we can relate with other countries in the world is by bombing them.”

Gabbard is a veteran, and now says, “Honor our servicemen and women by only sending them on missions that are worthy of their sacrifice.”