The DNC doesn’t want to let anyone near the stage who might question the Deep State and its approved henchman, Joe Biden. From Caitlin Johnstone at medium.com:

On a CNN panel on Monday, host John King spoke with Politico reporter Alex Thompson about the possibility of Democratic presidential candidate Tulsi Gabbard qualifying on Super Tuesday for the party’s primary debate in Phoenix later this month.

“I will note this, she’s from Hawaii,” King said of Gabbard. “She’s a congresswoman from Hawaii; American Samoa votes on Super Tuesday. The rules as they now stand, if you get a delegate, you’re back in the debates. As of now. Correct?”

“Yeah, they haven’t, I mean, that’s been the rule for every single debate,” Thompson replied. “And the DNC has not released their official guidance for the March 15 debate in Phoenix, but it would be very obvious that they are trying to cancel Tulsi, who they’re scared of a third party run, if they then change the rules to prevent her to rejoin the debate stage.”

And indeed, as the smoke clears from the Super Tuesday frenzy, this is precisely what appears to have transpired.

The intelligence community is throwing the same Russia crap at Sanders that they’ve thrown at Trump for the last four years. From W.J. Astore at bracingviews.com: 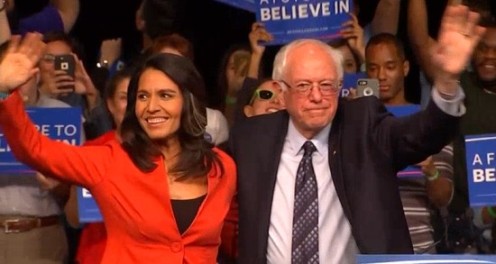 Just before Tulsi Gabbard announced her candidacy for the presidency as a Democrat, NBC ran a smear piece that suggested Vladimir Putin and the Russians loved her.  This smear was then repeated and amplified by Hillary Clinton, who suggested Gabbard was being groomed by the Kremlin to run as a third-party candidate, thereby ensuring Trump’s reelection in 2020.  There was no evidence for any of these claims — none.  Yet Gabbard was put on the defensive and her campaign (still ongoing) has been essentially redlined by the mainstream media.

Now it’s Bernie Sanders’s turn.  Bernie is much better known than Tulsi with a much larger movement behind him, so the DNC and the mainstream media have a modified tactic: rather than smearing Bernie as a Putin puppet, they’re suggesting the Russians are boosting his candidacy without his knowledge — the end game, naturally, is Trump’s reelection.  This was reported yesterday by the Washington Post and echoed today by the New York Times and other media outlets.  Here’s how NBC News put it today:

Sen. Bernie Sanders, I-Vt., excoriated Russia on Friday after being briefed that the Kremlin is attempting to help his presidential campaign as part of an effort to interfere with the Democratic primary and the 2020 election.

END_OF_DOCUMENT_TOKEN_TO_BE_REPLACED

“Afghanistan Papers” may be a game changer for Tulsi Gabbard, by Marco

Tulsi Gabbard fans shouldn’t set their hopes too high, but the Afghanistan Papers do vindicate her iconoclastic foreign policy views. From Marco at idsent.wordpress.com:

Three very interesting things happened today in Tulsi Gabbard’s campaign for the Democratic nomination for the US Presidency. First, there was a huge story in The Washington Post about the so-called “Afghanistan Papers,” which reveal thousands of pages of confidential interviews with hundreds of key US government officials telling how the Bush, Obama and Trump administrations lied to the American public about the prosecution of the 18-year US war in Afghanistan—how successive US administrations manipulated data about the war to paint a much rosier picture of US and Afghan government achievements throughout the conflict.

The story should suck up a lot of oxygen over the next few weeks, and it is one that should produce some unusually positive coverage for Tulsi, given that the issue of the failures of US military interventionism overseas has been the primary focus of her campaign. The second interesting thing is the story has the potential to tie into another story involving a management consulting firm called McKinsey & Company that performed confidential contract work in Afghanistan and Iraq.

END_OF_DOCUMENT_TOKEN_TO_BE_REPLACED

The Trip Down The Stairs, by the Zman

US politics is the politics of decline. From the Zman at theburningplatform.com:

In the year prior to a presidential election, Thanksgiving is usually when primary races for party nominations begin to come into focus. Donors have had most of the year to assess the candidates and the voters are starting to pay attention. The first test is a little over two months away, so all of the candidates have their people in the field. The boots on the ground test is one of those unofficial measures that tell us something about the organic and financial support for each candidate.

According the polls, Mayor Pete Buttigieg is the favorite to win the Iowa caucus, currently polling at 25%. Warren and Sanders are tied for second at a little under 20% each, while Biden is at 12%. The Iowa caucus is not a great predictor, but it does tend to winnow the field. That means the four plausible candidates at the moment are the four at the top of the polls. The rest of the field is in low single digits. Mayor Bloomberg does not appear to be running in the state at this point.

New Hampshire has always been the bellwether and the numbers there tell us it is a four human race as well. The latest polls have Warren, Buttigieg, Sanders and Biden clustered together in the teens. Tulsi Gabbard is the only minor candidate showing any support, which bears watching. New Hampshire has a habit of elevating a minor candidate when the leaders appear weak. Gabbard is the chaos option for frustrated voters in the state. Bloomberg could also be an option.

Gabbard and Trump Jr. Change America’s View of The View, by Tom Luongo

With just a few minutes of airtime, Tulsi Gabbard and Donald Trump Jr. pulled back the curtain on The View. From Tom Luongo at tomluongo.me:

The unbearable harpies of The View that gather every weekday on ABC to show the world what toxic femininity looks like reached their peak of relevance this week thanks to two Presidential candidates, Tulsi Gabbard (D-HI) and Donald Trump Jr. (R-Future).

Both Gabbard and Trump Jr. sat in the middle seat and commanded it like they owned it, doing what most of America has been begging for for years, to put both the panel and their hand-picked audience in their place.

Since she entered the race for the Democratic nomination Gabbard has been under consistent attack by the establishment.  They repeatedly make the arrogant mistake of trying to bully from their pulpit believing they can destroy a person of obvious character into submission who dissents from foreign policy orthodoxy, the true third-rail of American politics.

The hope is that Gabbard will make a mistake which can be then played ad nauseum, ad infinitum until she slinks off the stage in shame.