END_OF_DOCUMENT_TOKEN_TO_BE_REPLACED

Chinese debt is one of the “Big Three” situations currently threatening to spark a worldwide financial crisis. The other two are European banks and the US repo market explosion. Grab your favorite movie refreshments; 2020 promises to be interesting. From Tyler Durden at zerohedge.com:

Just days after China’s “moment of reckoning” in the dollar bond market arrived, when China was rocked by not only the biggest dollar bond default in two decades but also the first default by a massive state-owned commodities trader and Global 500 company, when Tianjin’s Tewoo Group announced the results of its “unprecedented” debt restructuring which saw a majority of its bondholders accepting heavy losses, and which according to rating agencies qualified as an event of default, last week a top adviser to China’s central bank warned of a possible “chain reaction” of defaults among the country’s thousands of local government financing vehicles after one of these entities nearly missed a payment this month.

As the FT reported, Ma Jun, an external adviser to the People’s Bank of China, called on the government to introduce “intervention mechanisms” to contain the risk associated with LGFVs — special entities used in the country to fund billions of dollars of roads, bridges and other infrastructure.

“Among the tens of thousands of platform-style institutions nationwide, if only a few publicly breach their contracts it may lead to a chain reaction,” Ma said in an interview published on Wednesday in the state-controlled Securities Times newspaper, adding that “measures should be created as soon as possible to prevent and resolve local hidden debt risks to effectively prevent the systemic risks of platform default and closure.”

Are The Rating Agencies Complicit In Another Massive Scandal: A WSJ Investigation Leads To Shocking Questions, by Tyler Durden

The bond ratings agencies rate a lot of companies right at the dividing line between investment grade and non-investment grade (“junk”) because if they downgrade a company into non-investment grade, even if the company deserves it  a lot of institutional holders of the bonds must sell, and the rating agencies worry about a cascade of sales and financial panic. From Tyler Durden at zerohedge.com:

Over the past two years, a key event many bears have cited as a potential catalyst for the next market crash, is the systematic downgrade of billions of lowest-rated investment grade bonds to junk as a result of debt leverage creeping ever high, coupled with the inevitable slowdown of the economy, which would lead to an avalanche of “fallen angels” – newly downgraded junk bonds which institutional managers have to sell as a result of limitations on their mandate, in the process sending prices across the corporate sector sharply lower.

As we discussed in July, the scope of this potential problem is massive, with the the lowest-rated, BBB sector now nearly 60% of all investment grade bonds, and more than double the size of the entire junk bond market in the US, and 3.4x bigger than the European junk bond universe. 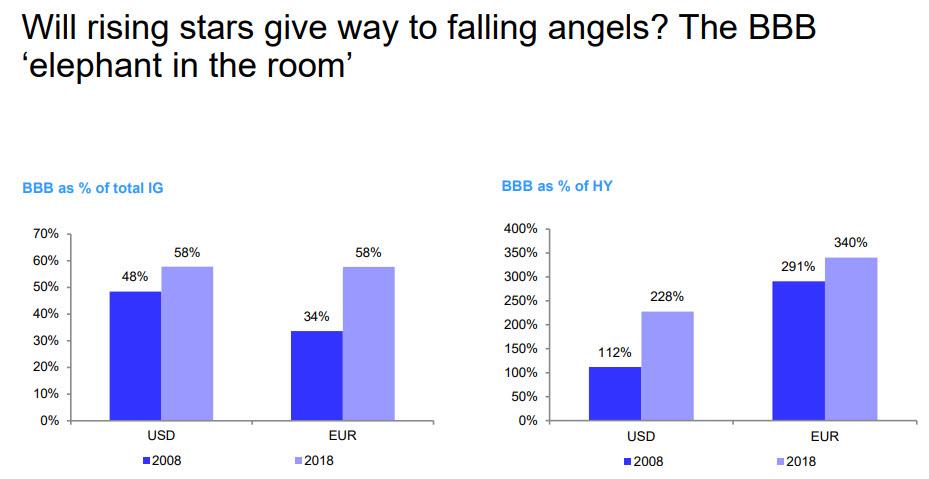 Treacherous Times for Bond Funds Ahead, by Wolf Richter

Why you’re better off owning high-quality individual bonds rather than bond funds or ETFs when the bond market is going to hell. From Wolf Richter at wolfstreet.com:

Bond ETFs and open-end bond mutual funds sound conservative in marketing materials, but they pack special risks & surprises in a downturn that can entail a catastrophic loss for investors.

Exchange-traded bond funds and bond mutual funds are big business. They’re a lot easier for retail investors to buy and sell than the actual bonds, particularly bond ETFs, which trade on stock markets just like stocks — and can even be day-traded. But this liquidity for investors is precisely the potentially catastrophic problem.

And in this era of rising interest rates and deteriorating credit, bonds already have plenty of other problems.

Corporate America carries record amounts of debt. Part of this debt is in form of bonds (the other part is in form of loans). The amount of bonds outstanding has ballooned over the past five years, even as the credit quality has deteriorated. Now there are $6.1 trillion of investment-grade US-corporate bonds outstanding, according to Moody’s (plus over $1.2 trillion of “junk bonds”). These bonds are everywhere, including in bond ETFs and bond mutual funds, and therefore in retail investors’ portfolios.

END_OF_DOCUMENT_TOKEN_TO_BE_REPLACED

“A Daisy Chain Of Defaults”: How Debt Cross-Guarantees Could Spark China’s Next Crisis, by Tyler Durden

If everybody guarantees everybody else’s debt, what happens when one or entities default? It’s interesting, to say the least, and China my get very interesting. From Tyler Durden at zerohedge.com:

On November 8, China shocked markets with its latest targeted stimulus in the form of an “unprecedented” lending directive ordering large banks to issue loans to private companies to at least one-third of new corporate lending. The announcement sparked a new round of investor concerns about what is being unsaid about China’s opaque, private enterprises, raising prospects of a fresh spike in bad assets.

A few days later, Beijing unveiled another unpleasant surprise, when the PBOC announced that Total Social Financing – China’s broadest credit aggregate – has collapsed from 2.2 trillion yuan in September to a tiny 729 billion in October, missing expectations of a the smallest monthly increase since October 2014.

END_OF_DOCUMENT_TOKEN_TO_BE_REPLACED

The Intolerable Scourge Of Fake Capitalism, by MN Gordon

The yield spreads between lower and higher quality bonds are expanding, which is not usually a good sign for financial markets. From MN Gordon at acting-man.com:

All is now bustle and hubbub in the late months of the year.  This goes for the stock market too. If you recall, on September 22nd the S&P 500 hit an all-time high of 2,940.  This was nearly 100 points above the prior high of 2,847, which was notched on January 26th.  For a brief moment, it appeared the stock market had resumed its near decade long upward trend.

We actually did not believe in the validity of the September breakout attempt: the extremely large divergence between the broad market and the narrow big cap leadership was one of many signs that an internal breakdown in the stock market was well underway. It is probably legitimate to refer to the January 2018 high as the “orthodox” stock market peak – the point at which most stocks topped out. [PT]

END_OF_DOCUMENT_TOKEN_TO_BE_REPLACED

As Credit Markets Crack, Gundlach Tells Investors To Get Out Of Corporate Bonds… Now, by Tyler Durden

High-yield (junk) bond yield spreads to safer bonds are widening out, and that’s generally not a good sign for financial markets. From Tyler Durden at zerohedge.com:

While credit markets ‘tightness’ had been proclaimed as a pillar of support for the bull thesis by many still clinging to hope, that is no longer the case.

Cash bonds appear to be outperforming (not widening as much) but this is due to managers, such as Aberdeen’s Luke Hickmane,preferring to use the considerably more liquid ETF and CDS markets to hedge before unwinding underlying cash positions.