The Sexual Left, the Welfare State, and the Divorce Revolution, by Stephen Baskerville

How the government destroyed the family. From Stephen Baskerville at chroniclesmagazine.org:

“All politics is on one level sexual politics.” —George Gilder

Extremists break out of the margins and take power when they fool opponents into advancing their agenda. By politicizing the family and sexuality, the left duped conservatives, and all of us, into becoming their accomplices.

Since last fall’s electoral coup, the United States has been well on its way toward becoming a de facto communist government. But it is not the communism that conservative Cassandras have warned against, nor did it come about as they expected. In fact, conservatives bear a huge share of the responsibility for what happened. Misunderstanding the dynamics of today’s left, they helped fulfill their own prophecies.

Americans have long prided themselves on being impervious to socialism. They even avoided creating an extensive European-style welfare state. But the U.S. was not lagging behind Europe; as always, it was leading. For Americans took a unique road to socialism: They created a government engine that bred its own class of insurgents.

Knowing that doctrinaire Marxism held little appeal for Americans, the left did an end run around this ideological obstacle. They enlisted conservatives to the cause of socialism by forsaking the rhetoric of class warfare, appealing instead to a sense of compassion for women and children that compassionate-conservative gallants could not resist.

The liberal left erected a different kind of welfare state: not broad-based social insurance for all, but a “safety net” limited to the poor (which in reality was anything but safe). In doing so, they defied the purists within their own ranks who rejected “welfarism” as a capitalist scheme to co-opt the working class. Operating according to its own innovative dynamic, safety-net socialism literally bred its own quasiproletariat of the marginalized, resentful, and entitled—all managed and directed by a vanguard of radicalized civil servant apparatchiks. At all levels, essential roles in this system were played by women.

Localism in the 2020s (Part 3) – Scaling Politics, by Michael Krieger

Politically, small is beautiful. Michael Krieger continues his series on localism at libertyblitzkrieg.com: 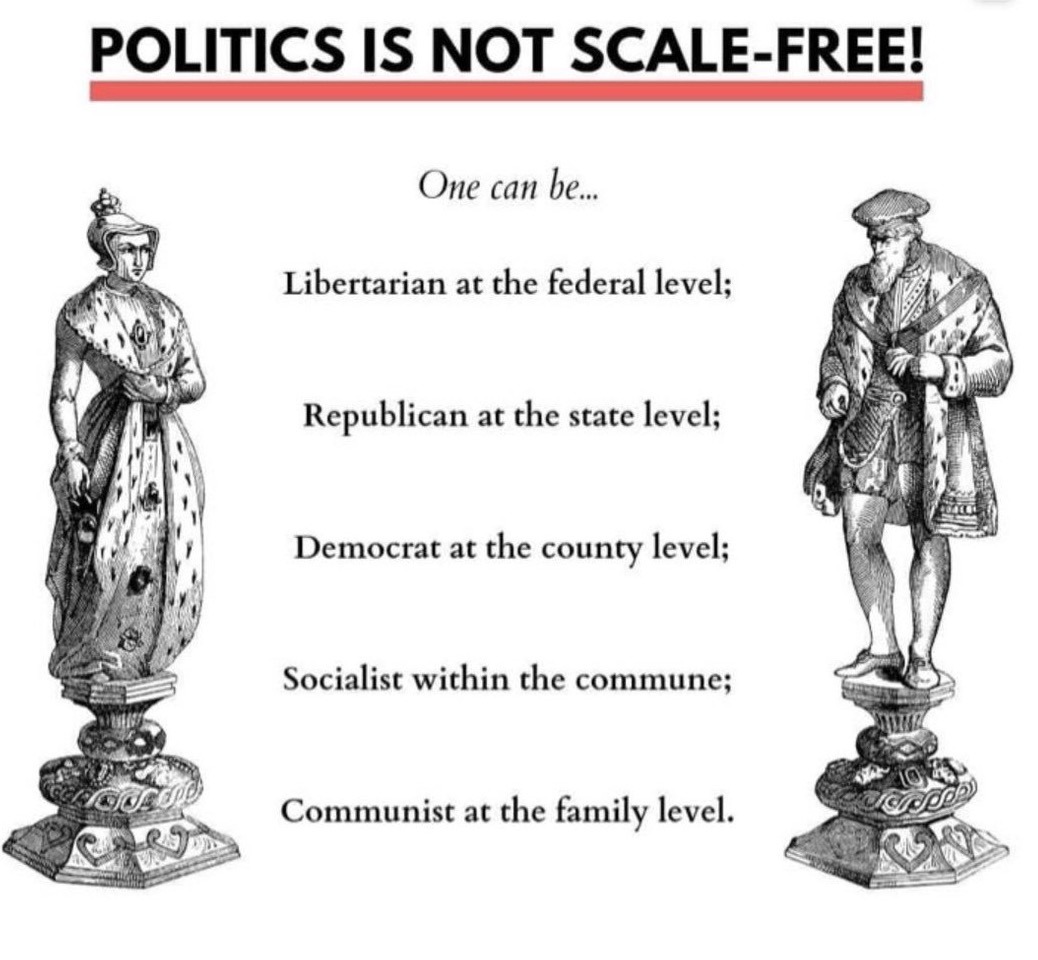 Today’s post will outline a framework through which I’ve come to view politics, as well as life in general. It will identify and examine various units of sovereignty as they exist in the contemporary U.S., since that’s the political system I’m most familiar with. Nevertheless, the overall framework should prove useful to people living all over the world.

Let’s start from the beginning. The most basic and meaningful unit of sovereignty is the individual, followed by the family, the municipality/county, the state (California, New York, Texas, etc) and finally the federal government (Washington D.C.). It’s my view that within a healthy society the scope of governance should decline as you add more and more individuals to the mix. It’s at the most basic unit of sovereignty (the individual), where authority over most of life’s decisions should reside. This runs the gamut from the really big decisions, such as what sort of work to do, who to marry, what religion (if any) to believe in; to the completely mundane, such as what to eat for breakfast.

America was once a country with a thriving civic culture. No more.  From Alex at ammo.com:

Church attendance in the United States is at an all-time low, according to a Gallup poll released in April 2019. This decline has not been a steady one. Indeed, over the last 20 years, church attendance has fallen by 20 percent. This might not sound like cause for concern off the bat. And if you’re not a person of faith, you might rightly wonder why you would care about such a thing.

Church attendance is simply a measure of something deeper: social cohesion. It’s worth noting that the religions with the highest rate of attendance according to Pew Forum have almost notoriously high levels of social cohesion: Latter-Day Saints, Jehovah’s Witnesses, Evangelical Protestants, Mormons and historically black churches top the list.

There’s also the question of religious donations. Religious giving has declined by 50 percent since 1990, according to a 2016 article in the New York Times. This means people who previously used religious services to make ends meet now either have to go without or receive funding from the government. This, in turn, strengthens the central power of the state.

It is our position that civil society – those elements of society which exist independently of big government and big business – are essential to a functioning and free society. What’s more, these institutions are in rapid decline in the United States, and have been for over 50 years.

What America Has Done To its Young People is Appalling, by James Ostrowski

Perhaps some of the problems young people face are caused by dysfunctional family situations and our failing education system. From James Ostrowski at lewrockwell.com:

Critics are perhaps too quick to judge America’s young people, citing declining SAT scores, obesity, drug overdoses, addiction to smart phones, bizarre alterations of personal appearance and high rates of (alleged) mental illness.  It’s just too easy to be annoyed at how some of the cashiers at the local grocery store seem unable to carry on a conversation or have chosen to mutilate their faces with pieces of metal.  We are perhaps too quick to condemn the crazed behavior of young protesters in recent years without fully considering what our government, society and culture have done to these poor souls.

Let’s begin at the beginning.  Forty percent of Americans are now born out of wedlock.  Single parent families are associated with a long list of social maladies:

“Children who grow up with only one of their biological parents (nearly always the mother) are disadvantaged across a broad array of outcomes. . . . they are twice as likely to drop out of high school, 2.5 times as likely to become teen mothers, and 1.4 times as likely to be idle — out of school and out of work — as children who grow up with both parents. Children in one-parent families also have lower grade point averages, lower college aspirations, and poorer attendance records. As adults, they have higher rates of divorce. These patterns persist even after adjusting for differences in race, parents’ education, number of siblings, and residential location.” Sara McLanahan, “The Consequences of Single Motherhood,” American Prospect (Summer 1994).