The Malaysian Job, by Andrew Cockburn

Goldman Sachs does what it can get away with, or what it can use its influence and money to get those charged with enforcing laws and regulations to overlook. From Andrew Cockburn (h/t SLL reader ursel doran) at harpers.org:

This past January, Goldman Sachs CEO and chairman David Solomon strode onto a stage at the bank’s lower Manhattan headquarters to launch the first “Investor Day” in the famously secretive institution’s one-hundred-and-fifty-year history. The celebration was promoted as an inspiring review of Goldman’s “strategic road map and goals,” and the presentations were replete with pledges of “transparency” and “sustainability,” though the overall performance was unkindly summarized by bank analyst Christopher Whalen as “investment bankster BS.” Early in his opening address, Solomon expounded the “core values” of the firm he had headed since October 2018. After “Partnership” and “Client Service” came “Integrity.” Solomon stressed that he was “laser-focused” on this last term, emphasizing that the company “must always have an unrelenting commitment to doing the right thing, always.” There followed, however, a glancing reference to a singular black cloud hovering over the proceedings. “In the wake of our experience with Malaysia,” he said, “I am keenly aware of how the actions of a few can harm our reputation, our brand, and our performance as a firm.” With that brief mention, he moved on to a fourth core Goldman value: “Excellence.”

Everyone in the room had recognized the allusion. “Malaysia” was shorthand for a gigantic fraud—possibly the largest in financial history—in which, beginning in 2009, billions of dollars were diverted from a Malaysian sovereign-wealth fund called 1Malaysia Development Berhad (1MDB) into covert campaign-finance accounts, U.S. political campaigns, Hollywood movies, and the pockets of innumerable other recipients. The “few” Solomon referred to were those Goldman executives whose active participation in the scam’s bribery and money laundering had since become undeniable.

Like Skripal, the chemical attacks in Syria, and Russiagate, the “official” story on Malaysian Airlines Flight MH17 has been a tissue of lies. From John Helmer at zerohedge.com:

A new documentary from Max van der Werff, the leading independent investigator of the Malaysia Airlines Flight MH17 disaster, has revealed breakthrough evidence of tampering and forging of prosecution materials;  suppression of Ukrainian Air Force radar tapes;  and lying by the Dutch, Ukrainian, US and Australian governments. An attempt by agents of the US Federal Bureau of Investigation (FBI) to take possession of the black boxes of the downed aircraft is also revealed by a Malaysian National Security Council official for the first time. 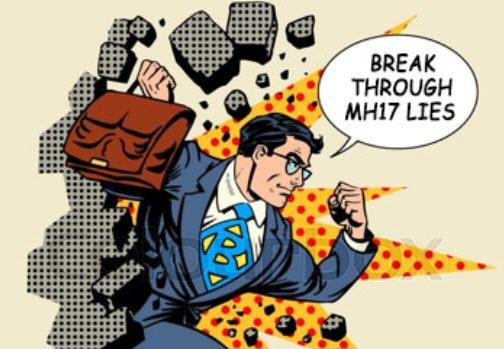 The sources of the breakthrough are Malaysian – Prime Minister of Malaysia Mohamad Mahathir; Colonel Mohamad Sakri, the officer in charge of the MH17 investigation for the Prime Minister’s Department and Malaysia’s National Security Council following the crash on July 17, 2014; and a forensic analysis by Malaysia’s OG IT Forensic Services of Ukrainian Secret Service (SBU) telephone tapes which Dutch prosecutors have announced as genuine.

The 298 casualties of MH17 included 192 Dutch; 44 Malaysians; 27 Australians; 15 Indonesians.  The nationality counts vary because the airline manifest does not identify dual nationals of Australia, the UK, and the US.

The new film throws the full weight of the Malaysian Government, one of the five members of the Joint Investigation Team (JIT), against the published findings and the recent indictment of Russian suspects reported by the Dutch officials in charge of the JIT; in addition to Malaysia and The Netherlands, the members of the JIT are Australia, Ukraine and Belgium. Malaysia’s exclusion from the JIT at the outset, and Belgium’s inclusion (4 Belgian nationals were listed on the MH17 passenger manifest), have never been explained.

Although it was a Malaysian airliner that was shot down over Ukraine in 2014, the Malaysian government has never been part of the official investigation. Now Malaysian Prime Minister Mahathir Mohamad has rejected the official conclusions. From F. William Engdahl at lewrockwell.com:

Malaysian Prime Minister Mahathir Mohamad sent shock waves in a public speech where he dismissed a Dutch “official” report blaming Russia for the downing of Malaysia Air Flight 17 in July, 2014, weeks after a CIA-led coup toppled the elected President of Ukraine. Despite the downplaying in western mainstream media of the Malaysian leader’s comments, it is creating a major new potential embarrassment for ex-Vice President Joe Biden and his Ukraine collaborators such as Igor Kolomoisky, in their flimsy effort to blame Russia for their own misdeeds.

During a dialogue with the Japanese Foreign Correspondent Club May 30, Mahathir challenged the Dutch government to provide evidence for their claim that the civilian Malaysian FH17 jet that crashed in Ukraine was shot down by a Russian-made BUK missile fired from a Russian regiment based in Kursk. The Malaysian Prime Minister told the Japanese media,

“They are accusing Russia, but where is the evidence? We know the missile that brought down the plane is a Russian type missile, but it could also be made in Ukraine.”

“You need strong evidence to show it was fired by the Russians; it could be by the rebels in Ukraine, it could be Ukrainian government because they too have the same missile.”

He went on to demand that the Malaysian government be allowed to inspect the black box of the crashed plane, stating the obvious, that the plane belongs to Malaysia, with Malaysian pilot and there were Malaysians passengers:

“We may not have the expertise but we can buy the expertise. For some reasons, Malaysia was not allowed to check the black box to see what happened.”

He went on to state,

“We don’t know why we are excluded from the examination but from the very beginning, we see too much politics in it, and the idea was not to find out how this happened, but seems to be concentrated on trying to pin it to the Russians.“

END_OF_DOCUMENT_TOKEN_TO_BE_REPLACED

The Malaysian investment fund scandal gets stinkier and stinkier. From Tyler Durden at zerohedge.com:

In the waning months of his administration, Malaysian Prime Minister Najib Razak was desperate to stave off the bankruptcy of1MDB, the sovereign wealth fund that Razak and members of his inner circle looted (allegedly with the help of Goldman Sachs). So, he turned to an unlikely source of funding to bail out the fund – signing away rights to some of his country’s most valuable resources in the process.

The source? China. Employing financier Jho Low as an intermediary, Razak worked out an arrangement with the Chinese government whereby Razak’s government would grant state-owned Chinese enterprises lucrative stakes in Malaysian railway and pipelines projects in exchange for $34 billion – more than enough to clear the shortfall in 1MDB, and then some.

By 2016, Mr. Najib was in a bind because the fund had borrowed $13 billion it couldn’t repay. He turned to Jho Low—a Malaysian financier the U.S. Justice Department has alleged was the mastermind of a multibillion-dollar theft of 1MDB funds—to negotiate with China to resolve the crisis, according to current and former Malaysian officials.

According to a report in the Wall Street Journal, Razak offered the Chinese an invaluable cherry on top of the sweetheart deal. Permission to dock Chinese Navy ships in two Malaysian ports – a “significant concession” that would push Malaysia undeniably into the orbit of Beijing.

Mr. Najib also embarked on secret talks with China’s leadership to let Chinese navy ships dock at two Malaysian ports, say two people familiar with the discussions. Such permission would have been a significant concession to Beijing, which seeks greater influence across contested waters of the South China Sea, but it didn’t come to pass.

Is debt catching up to the grand New Silk Road vision? From Tyler Durden at zerohedge.com:

President Xi Jinping’s “Belt and Road” trade infrastructure project could be hitting significant bottlenecks as some countries begin to sound alarms regarding the massive debt loads their governments are incurring.

Xi first announced the trade initiative also known as the “New Silk Road” in 2013, which needs more than $26 trillion of infrastructure investment by 2030 to keep regional economies expanding. The project includes railways, power plants, ports, highways and other projects across the world, with Beijing providing billions of dollars in credit to drive these schemes.

END_OF_DOCUMENT_TOKEN_TO_BE_REPLACED

The WikiLeaks emails have been an eye-opener. In a better world the organization would get some sort of public service award, and its leader wouldn’t be holed up in the Ecuadorian embassy in London. From Tyler Durden at zerohedge.com:

In addition to providing a glimpse into the internal, and often confrontational, dialogue that took place within the Clinton campaign on topics ranging from Hillary’s email server, to coordination and collusion with the media, to the planning how to attack Bernie Sanders, to the fascinating strife and conflicts of interest within the Clinton Foundation and the Clinton Global Initiative, the Podesta leaks have also been instrumental in providing the public with insight into Hillary’s flip-flopping views on the TPP. Indeed, as the WSJ put it recently, a running question through the presidential race has been whether Hillary Clinton is sincere in saying she opposes the 12-nation Asian trade deal that is one of the Obama administration’s top overseas priorities.

As secretary of state, Mrs. Clinton praised the proposed Trans-Pacific Partnership, calling it the “gold standard” of trade deals. But that was before she jumped into the presidential race. Organized labor, liberal activists and others want to scuttle TPP, so if Mrs. Clinton remained supportive, she risked a political backlash.

This is what the Podesta files have revealed so far: on Oct. 8, 2015, Hillary Clinton said she opposed the trade pact, a position that proved helpful in keeping her coalition intact and beating back a primary challenge from Vermont’s liberal senator, Bernie Sanders. That wasn’t an easy call. A new batch of hacked emails illustrates divisions within her staff about how to handle one of the most delicate issues of the race.

Five days before Mrs. Clinton’s announcement, her top advisers were divided about what she should do, with some fearing that opposition to the trade pact would look like a blatant “flip-flop.”

She has to be for TPP*. She called it the “gold standard” of trade agreements. I think opposing that would be a huge flip flop. She can say that as President she would work to change it. She can say that it can be better. But I think she should support it.

That produced the following reply from Jake Sullivan, the Clinton campaign’s top foreign policy advisor: ”I agree with you on TPP but others (including on this email!) feel strongly to the contrary.” The exchange ends with campaign manager Robby Mook noting that labor wouldn’t stand for her endorsing the trade deal.

“TPP would be lethal with labor. We’d loose [sic] Afscme and likely SEIU as well.” As the WSJ points out, that calculation apparently carried the day.

To be sure, the TPP came up during the last debate in Las Vegas, where Hillary Clinton said the following about the trade deal: “Well, first, let me say, number one, when I saw the final agreement for TPP, I said I was against it. She added that “it didn’t meet my test. I’ve had the same test. Does it create jobs, raise incomes and further our national security? I’m against it now. I’ll be against it after the election. I’ll be against it when I’m president.”

What she really meant is that she had realized that backing her previous stance, and supporting the TPP, would likely cost her millions of union votes. The irony, however, is that if Hillary is elected president, she will almost certainly revert back to some TPP formulation, especially since it is in the best interest of big business.