The reality police is reaching lower and lower to make sure that no non-approved narratives get promulgated. From CJ Hopkins at consentfactory.org:

So, according to Facebook and the Atlantic Council, I am now a “dangerous individual,” you know, like a “terrorist,” or a “serial murderer,” or “human trafficker,” or some other kind of “criminal.” Or I’ve been praising “dangerous individuals,” or disseminating their symbols, or otherwise attempting to “sow dissension” and cause “offline harm.”

Actually, I’m not really clear what I’m guilty of, but I’m definitely some sort of horrible person you want absolutely nothing to do with, whose columns you do not want to read, whose books you do not want to purchase, and the sharing of whose Facebook posts might get your account immediately suspended. Or, at the very least, you’ll be issued this warning:

Now, hold on, don’t click away just yet. You’re already on whatever website you’re reading this “dangerous,” “terrorist” column on (or you’re reading it in an email, probably on your phone), which means you are already on the official “Readers of Mass-Murdering Content” watch-list. So you might as well take the whole ride at this point.

Trying to keep China “in line” according to US government standards is not going to work. From Finian Cunningham at strategic-culture.org:

The mere playing with war rhetoric is reprehensible and speaks of American desperation to salvage its diminishing global power.

In an extraordinarily provocative move, the U.S. foreign policy establishment has warned China that it is pushing for a more aggressive strategy – all the way up to instigating war. In a tome-like article published by the Washington-based Atlantic Council, there are foreboding demands for numerous “red lines” to confront China over.

Entitled ‘The Longer Telegram’ the article is a strange throwback to Cold War thinking. It is ostentatiously mimicking the famous document authored by George Kennan in 1946 who as a U.S. diplomat based in the Moscow wrote ‘The Long Telegram’ prescribing a hostile strategy of containment against the Soviet Union.

Thus the Atlantic Council is billing the recent article as a seminal historical contribution to formulating U.S. policy towards China, and one that is more bellicose and “comprehensive”.

Moreover, the author’s identity is not revealed, going simply by the description of a “former senior government official” with expertise on U.S.-China relations. That is odd. It suggests that the author is close to the new Biden administration, if not a member of it in a new capacity such as national security advisor or intelligence chief.

The timing of the publication would indicate it has the purpose of forming the Biden administration’s policy. Many of its talking points and themes, such as defining China as the “main threat” to the U.S. and working more closely with allies to confront China, have been reiterated elsewhere by the Biden administration. But rather than making it an explicit U.S. policy document, the tactical choice appears to have been to publish it through the Atlantic Council think-tank since that would give a preferred nuanced distance from the White House. It’s more of a discreet telegram.

Max Blumenthal reports on the think tank’s shady arrangement with Burisma, the gas company at the center of  “Ukrainegate.” 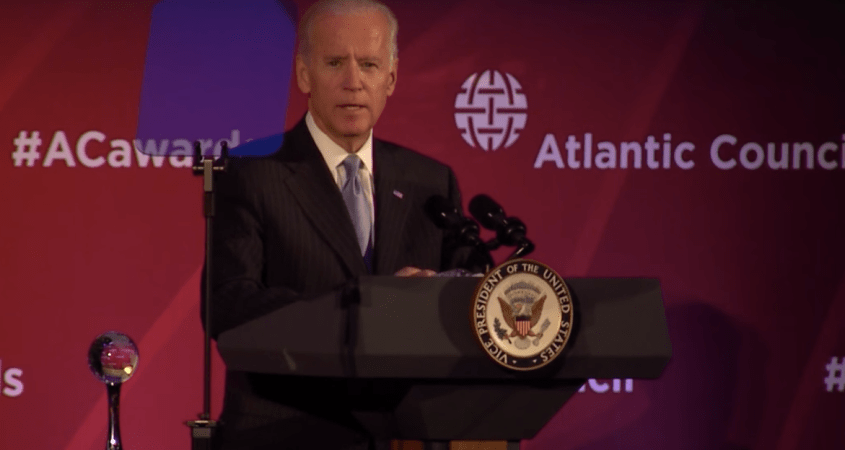 With its relentless focus on corruption in Russia and Ukraine, the Atlantic Council has distinguished itself from other top-flight think tanks in Washington. Over the past several years, it has held innumerable conferences and panel discussions, issued a string of reports, and published literally hundreds of essays on Russia’s “kleptocracy” and the scourge of Kremlin disinformation.

At the same time, this institution has posed as a faithful partner to Ukraine’s imperiled democracy, organizing countless programs on the urgency of economic reforms to tamp down on corruption in the country.

But behind the curtain, the Atlantic Council has initiated a lucrative relationship with a corruption-tainted Ukrainian gas company, the Burisma Group, that is worth as much as $250,000 a year. The partnership has paid for lavish conferences in Monaco and helped bring Burisma’s oligarchic founder out of the cold.

This alliance has remained stable even as official Washington goes to war over allegations by President Donald Trump and his allies that former Vice President Joseph Biden fired a Ukrainian prosecutor to defend his son’s handsomely compensated position on Burisma’s board.

The powers that be don’t like dissent, and they aim to do something about it. From The Grayzone Project at theantimedia.org:

This October, Facebook and Twitter deleted the accounts of hundreds of users, including many alternative media outlets maintained by American users. Among those wiped out in the coordinated purge were popular sites that scrutinized police brutality and U.S. interventionism, like The Free Thought Project, Anti-Media, and Cop Block, along with the pages of journalists like Rachel Blevins.

Facebook claimed that these pages had “broken our rules against spam and coordinated inauthentic behavior.” However, sites like The Free Thought Project were verified by Facebook and widely recognized as legitimate sources of news and opinion. John Vibes, an independent reporter who contributed to Free Thought,accused Facebook of “favoring mainstream sources and silencing alternative voices.”

In comments published here for the first time, a neoconservative Washington insider has apparently claimed a degree of credit for the recent purge — and promised more takedowns in the near future.

END_OF_DOCUMENT_TOKEN_TO_BE_REPLACED

The Atlantic Council is a NATO flack a prominent proponent of US unipolarity. Undoubtedly all their flags are at half-mast for John McCain. From Rick Rozoff at ronpaulinstitute.org:

On August 24 what is in effect the social media warfare division of the Atlantic Council published an article  accusing the Russian television and print news outlet RT of running a one-sided attack against the Democratic Party and several leaders thereof ahead of this November’s politically pivotal Senate and House of Representatives elections. (Thirty-five Senate seats and all 435 House seats are being contested.)

The Atlantic Council, until recently kept comparatively in the shadows for obvious reasons, is a think tank that has more than any other organization effected the transition of the North Atlantic Treaty Organization from a seeming Cold War relic with the break-up of the Warsaw Pact and the dissolution of the Soviet Union in 1991 to the world’s only and history’s first international military network with 70 members and partners on six continents currently. All thirteen new full member states are in Eastern and Central Europe; four of them border Russia.

END_OF_DOCUMENT_TOKEN_TO_BE_REPLACED

It’s official: Mark Zuckerberg is a complete whore for the Deep State. There’s probably no age restriction, but he seems a little young to be selling his soul. From Jake Johnson at theantimedia.org:

The Atlantic Council “will now assist Facebook in suppressing what they decide is disinformation.”

In a new project Facebook insists is a completely objective and nonpartisan effort to root out what it deems “disinformation,” the social media giant announced on Thursday that it is partnering with the Atlantic Council — a prominent Washington-based think-tank funded by Saudi Arabia, major oil companies, defense contractors, and Charles Koch — to prevent its platform from “being abused during elections.”

“This is alarming,” independent journalist Rania Khalek concluded in a tweet on Thursday. “The Atlantic Council — which is funded by gulf monarchies, western governments, NATO, oil and weapons companies, etc. — will now assist Facebook in suppressing what they decide is disinformation.”

According to its statement announcing the initiative, Facebook will “use the Atlantic Council’s Digital Research Unit Monitoring Missions during elections and other highly sensitive moments.”

“This effort is part of an broader initiative to help provide credible and independent research about the role of social media in elections, as well as democracy more generally. We look forward to working together to protect free and fair elections across the world.”

While Facebook’s statement fawned over the Atlantic Council’s “stellar reputation,” critics argued that the organization’s reliance on donations from foreign oil monarchies and American plutocrats puts the lie to the project’s stated mission of shielding the democratic process from manipulation and abuse.

“Monopoly social media corporations teaming up with [the] pro-U.S. NatSec blob to determine truth was always the logical end of ‘fake news’ panic,” Adam Johnson, a contributor at Fairness and Accuracy in Reporting (FAIR), argued on Twitter in response to Facebook’s announcement.

red flag for this whole "fake news" panic is why is FB only charged with stopping "foreign" influence and not domestic corp/campaign influence or psychological ops of US. The same US govt that reserves the right to run anonymous online propaganda campaigns https://t.co/WU4jEXSeVL

Atlantic Council Explains Why We Need To Be Propagandized For Our Own Good, by Caitlin Johnstone

The powers that be yearn for the good old 1950s and 1960s when everyone got their news from a few easily controlled sources. Sorry, guys and gals, we’re not in “Lone Gunman” land anymore. From Caitlin Johnstone at medium.com:

I sometimes try to get establishment loyalists to explain to me exactly why we’re all meant to be terrified of this “Russian propaganda” thing they keep carrying on about. What is the threat, specifically? That it makes the public less willing to go to war with Russia and its allies? That it makes us less trusting of lying, torturing, coup-staging intelligence agencies? Does accidentally catching a glimpse of that green RT logo turn you to stone like Medusa, or melt your face like in Raiders of the Lost Ark?

“Well, it makes us lose trust in our institutions,” is the most common reply.

Okay. So? Where’s the threat there? We know for a fact that we’ve been lied to by those institutions. Iraq isn’t just something we imagined. We should be skeptical of claims made by western governments, intelligence agencies and mass media. How specifically is that skepticism dangerous?

Trying to get answers to such questions from rank-and-file empire loyalists is like pulling teeth, and they are equally lacking in the mass media who are constantly sounding the alarm about Russian propaganda. All I see are stories about Russia funding environmentalists (the horror!), giving a voice to civil rights activists (oh noes!), and retweeting articles supportive of Jeremy Corbyn (think of the children!). At its very most dramatic, this horrifying, dangerous epidemic of Russian propaganda is telling westerners to be skeptical of what they’re being told about the Skripal poisoning and the alleged Douma gas attack, both of which do happen to have some very significant causes for skepticism.

When you try to get down to the brass tacks of the actual argument being made and demand specific details about the specific threats we’re meant to be worried about, there aren’t any to be found. Nobody’s been able to tell me what specifically is so dangerous about westerners being exposed to the Russian side of international debates, or of Russians giving a platform to one or both sides of an American domestic debate. Even if every single one of the allegations about Russian bots and disinformation are true (and they aren’t), where is the actual clear and present danger? No one can say.

To continue reading: Atlantic Council Explains Why We Need To Be Propagandized For Our Own Good