So you wanna try to rid the world of fossil fuels? From Martin Armstrong at armstrongeconomics.com: 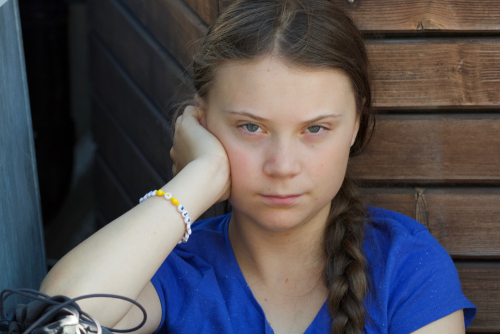 One crisp winter morning in Sweden, a cute little girl named Greta woke up to a perfect world, one where there were no petroleum products ruining the earth. She tossed aside her cotton sheet and wool blanket and stepped out onto a dirt floor covered with willow bark that had been pulverized with rocks. “What’s this?” she asked.
“Pulverized willow bark,” replied her fairy godmother.
“What happened to the carpet?” she asked.
“The carpet was nylon, which is made from butadiene and hydrogen cyanide, both made from petroleum,” came the response.
Greta smiled, acknowledging that adjustments are necessary to save the planet, and moved to the sink to brush her teeth where instead of a toothbrush, she found a willow, mangled on one end to expose wood fibre bristles.
“Your old toothbrush?” noted her godmother, “Also nylon.”
“Where’s the water?” asked Greta.
“Down the road in the canal,” replied her godmother, ‘Just make sure you avoid water with cholera in it”
“Why’s there no running water?” Greta asked, becoming a little peevish.

The tea leaves are beginning to turn out. This may well be the year in which the climate change movement begins to go off the rails.

It started off great, as elites and climatists descended on Davos to press home what looked to be the final mile in ramming through the adoption of some form of global Green New Deal by year’s end. Their secret weapon, a Swedish teen, was primed, locked and loaded.

Their cause was then handed another gift in the Coronavirus lockdowns. Climate campaigners were over the moon with excitement over the lockdown and boasted with claims of lower CO2 levels due the economic shutdown. In just two months, COVID lockdown policies had achieved what climate campaigners had been working for years to realize. Or so they thought. It was later revealed that lockdowns had little or no impact on overall CO2 concentration. But since when did a little science get in the way of an apocalyptic juggernaut.

But something strange happened on the way to Wuhan.

One of the key components of the intergovernmental fear campaign to promote COVID lockdowns – was dubious computer modelling. Initially, these were referred to as “The Science” by cock-sure politicians and public health officials. The press quickly fell in line with this groupthink. Any dissenters were roundly attacked and deplatformed. As their mission crept on, it became clear that these models were ever only masquerading as ‘science’. The fictional doomsday scenarios being created by technocrats were then snapped up by the mainstream media, and then used them to hound political officials into implementing a one-size-fits-all centralized policy of de-industrialization and mass travel bans. Perhaps it’s no coincidence that this is exactly what climatists and Green New Deal campaigners have been hoping for.

The Conman Elites That Want To “Save Us” From The Coronavirus, by Brandon Smith

Beware of those who hold themselves out as our saviors from the coronavirus. From Brandon Smith at alt-market.com:

Last week the Federal Reserve released a report predicting that the next print on GDP numbers will likely show a loss 34.9% in the second quarter. This is the biggest GDP plunge since the Great Depression; even the crash of 2008 doesn’t compare.  And when we take into account the fact that the Fed artificially boosts GDP calculations by adding in many non-productive government programs, we have to ask, what are the REAL losses above and beyond what the Fed admits to?

With the supply chain in disarray, many companies (like Apple) are trying to shift their manufacturing base to dodge the pandemic. Of course, none of them want to bring factories back to the US; there’s simply no incentive to do so. And, the small business sector has been crushed by the shutdowns, with the vast majority of those seeking bailout loans still waiting for aid and over 20.5 million employees laid off in April alone.

Needless to say, the economy has been severely affected. The problem is that many people are being led to believe that this event has been triggered by the virus outbreak alone. This is a lie. As I noted back in February in my article ‘Global Centralization Is The Cause Of The Crisis – Not The Cure’, the collapse of the Everything Bubble was well underway long before the pandemic. The crash was started by the Federal Reserve hiking rates into economic weakness at the end of 2018, puncturing the bubble and setting the liquidity crisis in motion.

The pandemic is just the icing on the cake of a collapse that was going to happen anyway. It is also a convenient scapegoat, because now the banking elites are going to escape all the blame for the crash and the public is going to hyperfocus on the coronavirus as the culprit.

END_OF_DOCUMENT_TOKEN_TO_BE_REPLACED

Greta Thunberg is being played, big time. From Raúl Ilargi Meijer at theautomaticearth.com:

I have a lot of sympathy for young(er) people who are upset about what has happened, and still is happening, to the planet they were born on, during their lifetime and that of the generations before them. I have less sympathy for the “climate movement” even if those same young people thinnk it represents them, because it has grown too big and too diverse, and has come to rely (for no reason) too much on hype and exaggeration. Don’t feed your opponent or enemy.

The movement also has too little attention for what younger people themselves contribute to the descent into chaos. If you don’t start with yourself, how are you ever going to tell others what to do? How many phones and gadgets and cars do you have? Do your clothes also say Made in China? Personal question.

Naming one’s movement “Extinction Rebellion” strikes me as odd, because the movement appears to be, from what I can see, based almost exclusively on the deleterious effects of carbon emissions, though these have -at least so far- played just a small part in the actual extinction of -far too many- species, much less than the use of chemicals, the loss of forest, and land use in general, just to name some examples.

END_OF_DOCUMENT_TOKEN_TO_BE_REPLACED

Letter On How To Advise A Teenage Daughter On ‘Climate Change’, from Armstrong Economics

A LETTER FROM A CONSTITUENT ABOUT HOW HE ADVISED HIS TEENAGE DAUGHTER ON ‘CLIMATE CHANGE’:

After our daughter of fifteen years of age was moved to tears by the speech of Greta Thunberg at the UN the other day, she became angry with our generation “who had been doing nothing for thirty years.”

So, we decided to help her prevent what the girl on TV announced of “massive eradication and the disappearance of entire ecosystems.”

We are now committed to give our daughter a future again, by doing our part to help cool the planet four degrees.

From now on she will go to school on a bicycle, because driving her by car costs fuel, and fuel puts emissions into the atmosphere. Of course it will be winter soon and then she will want to go by bus, but cycling through the freezing builds resilience.

Of course, she is now asking for an electric bicycle, but we have shown her the devastation caused to the areas of the planet as a result of mining for the extraction of Lithium and other minerals used to make batteries for electric bicycles, so she will be pedaling, or walking.

Which will not harm her, or the planet. We used to cycle and walk to school too.

END_OF_DOCUMENT_TOKEN_TO_BE_REPLACED

New Law Requires You To Listen To Greta Thunberg Lecture Before Purchasing Gasoline, from The Babylon Bee

U.S.—A series of new bills working their way through state legislatures in New York, California, Oregon, Hawaii, and several other progressive states will require you to listen to a Greta Thunberg lecture before purchasing gasoline.

Motorists will be required to watch a 20-minute lecture by the 16-year-old climate activist before they purchase gallons and gallons of harmful fossil fuels.

“We want to make sure drivers are informed,” said California Governor Gavin Newsom, who says he will sign the bill into law. “So we are having them get lectured by a 16-year-old so they will have all the facts before they do something rash like put gasoline in their cars to go to work.”

Once the driver has listened to Thunberg’s entire lecture, they will be prompted to complete a quick, fifteen-question quiz to show they understand how horrible they are for driving a car. Drivers who get at least 80% will then be allowed to refuel their vehicles. As they refuel, the screen will simply play a clip of Thunberg saying, “How dare you!” over and over again.

The law will not apply to celebrities purchasing jet fuel.

Putin Shames Greta Thunberg And Her Handlers Over Environmental Agenda, by Tyler Durden

Somebody needed to put media and political darling Greta Thunberg in her place, and who better than Vladimir Putin? From Tyler Durden at zerohedge.com: 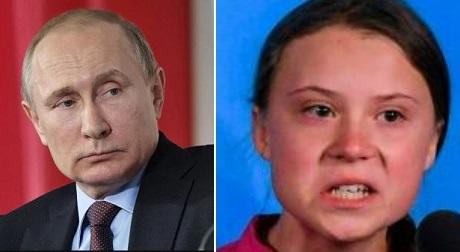 “Sure, Greta is kind, but emotions should not control this issue,” said Putin.

“Go and explain to developing countries why they should continue living in poverty and not be like Sweden,” he added, before saying that it was deplorable how some groups are using Thunberg to achieve their own goals.

In her speech last week, Thunberg lashed out at the United Nations – saying “You have stolen my dreams and my childhood with your empty words.”

Greta Thunberg is 13 minutes into her 15 minutes of fame and SLL wants to take a couple of shots at her before she disappears back into well-deserved obscurity. From Onar Åm at libertynation.com:

Climate activist Greta Thunberg’s recent speech to the United Nations seemed to reveal a deeply troubled individual. She said her childhood was taken away from her by the looming threat of climate change, and she blamed world leaders for letting it happen. She has every reason to be upset, but she is directing her anger at the wrong people. The real culprit is the green catastrophe industry that manufactures crises out of nothing.

The critical ingredient in Thunberg’s climate anxiety is her youth. Had she been older, she would have lived through so many false alarms that she would have grown numb and wary of green catastrophists.

END_OF_DOCUMENT_TOKEN_TO_BE_REPLACED

Greta Thunberg is no humanitarian. From Ryan McMaken at mises.org:

On Monday, celebrity climate activist Greta Thunberg delivered a speech to the UN Climate Action summit in New York. Thunberg demanded drastic cuts in carbon emissions of more than 50 percent over the next ten years.

It is unclear to whom exactly she was directing her comments, although she also filed a legal complaint with the UN on Monday, demanding five countries (namely Argentina, Brazil, France, Germany and Turkey) more swiftly adopt larger cuts in carbon emissions. The complaint is legally based on a 1989 agreement, the Convention on the Rights of the Child, under which Thunberg claims the human rights of children are being violated by too-high carbon emissions in the named countries.

Thunberg seems unaware, however, that in poor and developing countries, carbon emissions are more a lifeline to children than they are a threat.