History Was Supposed to End. What Happened? by Jeffrey Tucker

Is liberty the next stop in human political evolution? Let’s hope so. From Jeffrey Tucker at aier.org:

Anyone paying close attention at the turn of the 21st century could foresee the impending failure of the social-democratic consensus throughout the developed world.

The exalted experts who rose to power in the postwar period built gigantic state-based systems of social management and control and took over vast swaths of private society, imposing planning schemes across many sectors of economic life. They imagined themselves to be permanent fixtures of the socio-economic system. After all, this approach won the war (so they said), so why couldn’t it win the peace?

But there was a problem: over time nothing worked as it was supposed to. There were massive internal contradictions within the model, as Amity Shlaes shows in her new book on the Great Society. The new systems relied on bureaucratic command, not market signals. There was another problem: they were hugely imposing on people’s lives and property, and people don’t like that. Or rather: they will put up with it so long as they perceive that the benefits exceed or at least match the costs.

Building that apparatus – the efforts really began about a century ago, extended through the New Deal, but became a full model of social control in the postwar period – depended fundamentally on its successful sales pitch: these were programs built by workers for the sake of social justice, for the poor, for the marginalized, against plutocratic elites.

END_OF_DOCUMENT_TOKEN_TO_BE_REPLACED

Globalists Have Set Operation ‘Blame The Populists’ In Motion, by Brandon Smith

Updates on familiar themes from Brandon Smith. The long-predicted crash that will bring down the global economy has become. He may be right. From Smith at alt-market.com:

This past week’s events have sent the economic world into a tailspin. Mainstream analysts were so sure of themselves heading into the July Federal Reserve meeting – The Fed was going to cut rates by a respectable margin, or they were going to cut incrementally and promise the markets through thinly veiled language that QE4 was well on the way. This was supposed to be a certainty.

They did not get what they were hoping for, but I don’t think many people understand why the Fed did what they did.

I have long held that the Fed has no intention of kicking the can on the economic crash that is currently underway, and that the Fed’s tightening cycle was a way to restrict liquidity into economic weakness in order to trigger the collapse of the “Everything Bubble”. I predicted over the past two years that the Fed would keep liquidity conditions tight until right before or right after an accelerated crash in fundamentals and markets. The crash in fundamentals has already begun in 2018 and 2019. A return to incremental crash conditions in stock markets has also now likely started.

While I believed the central bank would hold rates steady in July, Jerome Powell’s public statements after the Fed announcement of a minor .25 bps rate cut were even worse for market investors to hear and only support my original position. Powell’s assertion that the cut was merely a mid-year “adjustment” and not the beginning of an easing cycle horrified the investment world. Powell was telling markets quite bluntly that the punch bowl was not coming back anytime soon.  On top of this, St. Louis Fed president James Bullard refused to commit to any further interest rate adjustments this year, citing a “wait and see” approach, which could take many months.  Once again, Fed officials are making it clear that expectations for a stimulus bonanza are naive.

The consensus seems to be that the Fed has offered “too little too late”, and I would say that this is a completely deliberate action. Frankly, there was nothing holding the Fed back from a cut of .50 bps and lavishing the financial media with images of QE heaven. Trump says he wants it, the daytrading world is begging for it, and central bankers rarely shy away from more money printing. Unless, of course, the banking elites WANT a crash to happen in the near term, that is.

END_OF_DOCUMENT_TOKEN_TO_BE_REPLACED

What next for the populist revolt? by Frank Furedi

The populist revolts we’ve seen so far—Brexit, Trump, the Yellow Vests—are nothing compared to what’s coming. From Frank Furedi at spiked-online.com:

People have rattled the elites – now they need to go further.

In the West in 2018, we witnessed the intensification of a new conflict – that between anti-populist political elites and a growing grassroots movement that is hostile to these elites.

Many commentators have interpreted this conflict in classical economic language. This is fundamentally a struggle over the distribution of resources, they claim. Even an astute commentator like Fareed Zakaria, who recognises that the ‘yellow vest’ protestsin France are underpinned by profound cultural tensions, especially between rural and urban France, is nevertheless drawn towards a narrowly economic explanation. ‘It’s part class, part culture, but there is a large element of economics to it as well’, he says.

Zakaria’s commentary – titled ‘The new dividing line in Western politics’ – is a good illustration of today’s widespread reluctance to face up to new cultural and political tensions, to recognise that people are moved to protest these days by concerns that do not fit into the 20th-century model of socio-economic class struggle.

END_OF_DOCUMENT_TOKEN_TO_BE_REPLACED

Democracy Is Sacred – Except When It Isn’t, by Justin Raimondo

The nationalism tide keeps rising in Europe. From Justin Raimondo at antiwar.com:

On both sides of the Atlantic the regnant elites have launched a furious regime change campaign not all that different from the ones they started in the former Soviet republics. The formula seems to go like this: hold an election in which the full resources of the EU states and their upper classes are brought to bear on one side of the question. Vilify dissenters as more than likely agents of Vladimir Putin.

On the British side the government of Prime Minister Theresa May, which has been all along pretending to be in favor the people’s decision to leave the EU, has effectively sabotaged the process with so many exceptions, amendments, other concessions to Brussels that they might as well have stayed in.

Shocked by their defeat, the Remainers have been scheming and plotting and demand a new election – and are presumably willing to keep voting until they get the “right” result.

But events are overtaking them: the right-wing populist upsurge that threatens the very existence of the EU is not quite through making waves. The French “yellow vests” have arisen from the rural and poorer sections of the countryside. These are France’s forgotten as Macron raises the petroleum price by 15% – one third of that in the name of stopping global warming.

END_OF_DOCUMENT_TOKEN_TO_BE_REPLACED

Progressives melt down after the Democratic doyenne denounces open borders here and in Europe.

Amidst the hurly-burly of politics these days, it can be hard to notice when your side has won a victory. Yet that’s what’s just happened for conservatives on immigration: they’ve won. Okay, it’s not a final victory, nor even a crushing victory, but, even so, it’s a win.

We know this because Hillary Clinton, arguably still the biggest name in Democratic politics, has just said that conservatives were right. She has conceded the essence of the rightist—and, by the way, centrist—critique of the open-borders approach to immigration.

On November 22, Clinton said in an interview with The Guardian, “I think Europe needs to get a handle on migration because that is what lit the flame.” Continuing in that vein, she damned German Chancellor Angela Merkel with faint praise: “I admire the very generous and compassionate approaches that were taken particularly by leaders like Angela Merkel, but I think it is fair to say Europe has done its part, and must send a very clear message—‘we are not going to be able to continue provide refuge and support’—because if we don’t deal with the migration issue it will continue to roil the body politic.” In other words, when Merkel opened the German border in 2015, she was being nice, but misguided. Of course, Clinton is no doubt aware that the global backlash against Merkelism was felt in America, too, contributing to her own defeat in 2016.

END_OF_DOCUMENT_TOKEN_TO_BE_REPLACED

Canada: Shielded From the Populist Wave No Longer, by Benjamin L. Woodfinden

Justin Trudea, dashing progressive hero, may end up a goat if Canada’s seething populist discontent explodes. From Benjamin L. Woodfinded at The American Conservative via theburningplatform.com: 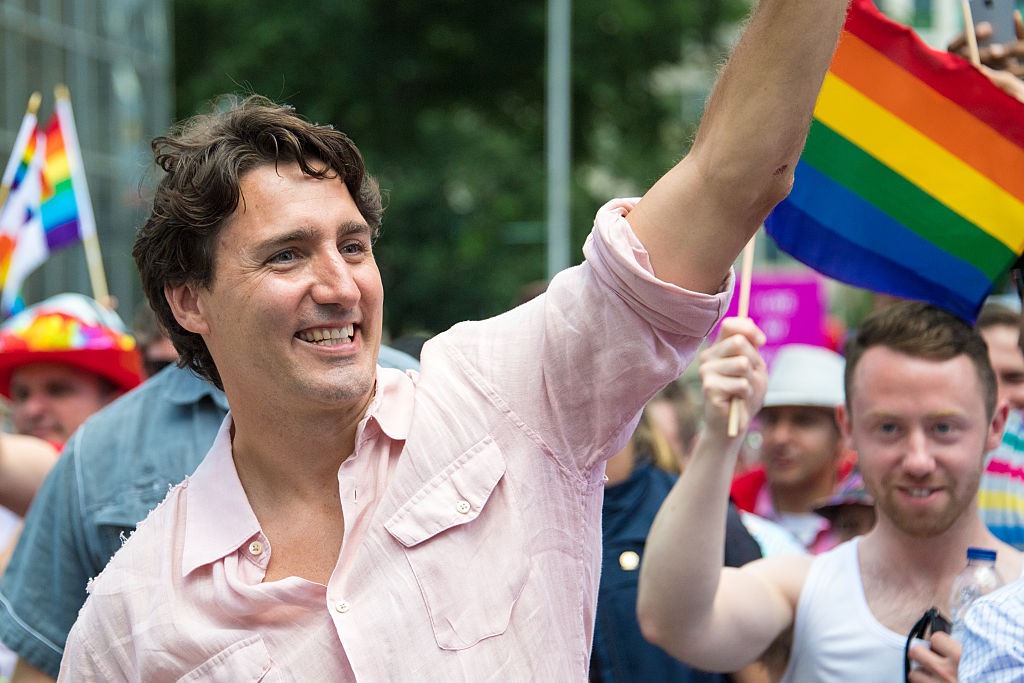 In the aftermath of the 2016 election and the rapid spread of populism around the globe, one country seemed immune: Canada. Justin Trudeau, the charismatic, dashing, and woke prime minister, sees himself as progressive liberalism’s leading light. But Canada is ripe for a populist revolt, and Trudeau may end up being its perfect catalyst.

Contrary to its mild-mannered international image, Canada has a long history of populism. Its upper crust are sometimes referred to as the “Laurentian elite.” Concentrated in downtown Toronto, Montréal, and Ottawa, these are Canada’s equivalent of East Coast elites. They dominate their country’s political, academic, cultural, media, and business institutions, and are ideologically homogeneous.

END_OF_DOCUMENT_TOKEN_TO_BE_REPLACED

The Real Contagion Threat is Political, by Tom Luongo

Sweden is now another data point on the growing strength of populist and nationalist movements. From Tom Luongo at tomluongo.me:

The real danger to the current institutional order was just demonstrated in Sweden. While I’ve talked at length about the potential financial contagion stemming from the implosion of multiple emerging market currencies it is the growing political crisis in Europe that will shape our future.

Sweden is The Land where Socialism Works, or so I keep getting told by ignorant leftists who cling to the power fantasy that central planning is the only way to make the trains run on time.

Central planning does do that, but only to deliver people into the nightmare of social disorder brought on by the disruption of the natural flow of capital.

But, the effects of the collectivist mindset are far more pernicious than those extreme examples.  And it is important we understand how little policies grow into big problems over time due to shaping people’s decisions through government edicts. END_OF_DOCUMENT_TOKEN_TO_BE_REPLACED