Texas, Abortion, and the Constitution, by Andrew P. Napolitano

Last week, this column addressed state nullification and secession under the U.S. Constitution. It argued, in effect, that when the government fails to protect fundamental liberties or actively assaults them — as it has done in the past 18 months under the guise of public health — the states and individuals can peacefully ignore the government and, if necessary, leave it.

The concept of states leaving the federal government has been dead and buried since the outcome of the War Between the States. Yet four years after the war, the Supreme Court recognized secession in an old Texas case and held that three-quarters of the states would need to consent for any one of them to leave.

Nullification posits that any state individually — through its legislature or highest court — can determine that an action of the federal government is unconstitutional under the U.S. Constitution and therefore it is nullified and may legally be ignored in that state.

Both ideas were embraced by many who ratified the Constitution and the Bill of Rights, and they were defended forcefully by Thomas Jefferson and James Madison.

Last week, the Supreme Court revived the concept of nullification.

Since January 1973, when the Supreme Court issued its opinion in Roe v. Wade, abortion has been lawful everywhere in the United States up to the time of fetal viability, after about 24 weeks of gestation. This principle has been challenged many times in many courts, and it has always been upheld.

The Supreme Court has faithfully upheld Roe every time it has come before the court. Sadly, Roe also permits the states to permit abortion up to the moment before birth, as some states do.

Texas, the state where Roe began, recently enacted legislation that directly contradicts Roe’s central holding. The Texas statute prohibits abortions upon the detection of a fetal heartbeat, after about six weeks of gestation. That legislation was challenged by abortion providers in a federal court.

Why Did China Buy an Airstrip in Texas? by Aden Tate

There are a lot of strange goings on with the Chinese in Texas. From Aden Tate at theorganicprepper.com:

Should nations let their enemies purchase land within their own borders? You’d likely give a resounding ‘no’ to this question, correct?

And yet, a former Chinese general with alleged ties to Chinese concentration camps recently bought an airstrip in Texas. And this isn’t just some random ranch in the middle of nowhere. It is 200 square miles (130,000 acres) of land between one of the most active Air Force bases in the U.S. and the border of Mexico.

As the world is being fear-mongered about “variants,” this is happening right under American noses.

Who is Sun Guangxin?

Sun Guangxin is a former General of the People’s Liberation Army in China. He owns two-thirds of real estate where the Uyghur concentration camps are located in the capital of Xinjiang.

Russia had The Gulag. China has the LAOGAI.

The terrors that take place within the LAOGAI system can be seen and read about on the LAOGAI Research website. The pictures and nightmarish stories within will show you the brutal truth about socialism/communism.

Why Did Guangxin Purchase Land in the U.S.?

The former Chinese General purchased the land to allegedly build wind farms. The name of the property purchased by the Chinese firm is called the Morning Star Ranch.

Sun Guangxin, who has close ties to the Chinese Communist Party, purchased the land allegedly to build wind farms, Kyle Bass, founder, and principal of Hayman Capital Management and a founding member of the Committee on the Present Danger: China, told Epoch T.V. in a recent interview. 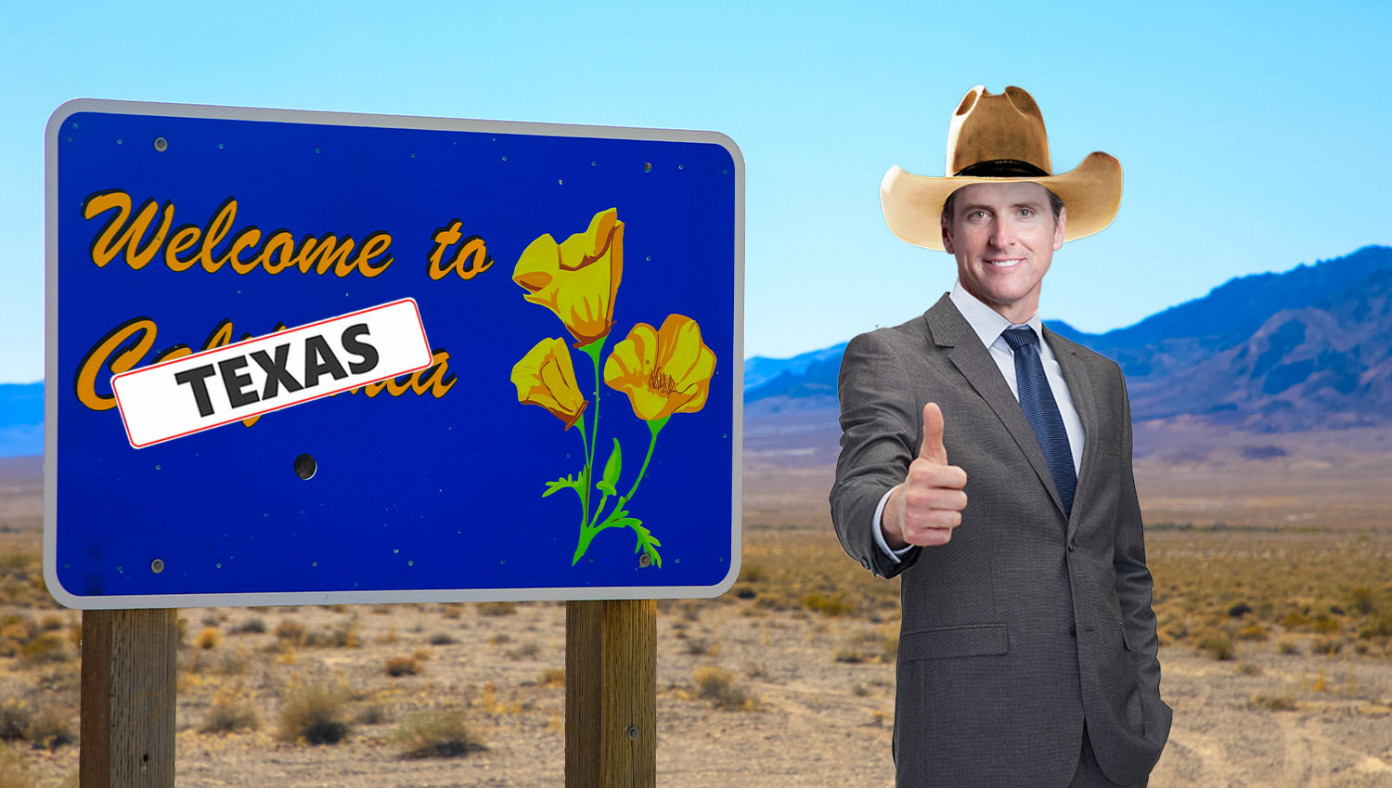 BLYTHE, CA—In a last-ditch effort to lure fleeing residents back to the state of California, Governor Gavin Newsom has decided to disguise his state as Texas.

Witnesses claim to have seen the desperate governor in a cowboy hat, speeding along the border, slapping “TEXAS” stickers on all the road signs.

Sources also say Newsom hired consultants to give advice on how to make California more Texas-like. The consultants were later fired after they recommended things like “fewer regulations”, “lower taxes”, and “less human poop on the sidewalk”.

“Howdy, y’all!” yelled Newsom to cars as they sped off, looking for greener pastures. “Yer goin’ the wrong way! Texas is this way, see? We got lots of guns and ammo here! Barbecue too! And most importantly, we got FR– FR–”

The governor was unable to continue as the word “freedom” got caught in his throat and he started gagging.

Texas killed Covid by ignoring a lot of expert recommendations. From Ron Paul at ronpaulinstitute.org:

In March, Governor Greg Abbott announced that Texas would open for business 100 percent without a statewide mask mandate. The pro-lockdown “experts” were shocked. If a state as big as Texas joined Florida and succeeded in thumbing its nose at “the science” – which told us that for the first time in history healthy people should be forced to stay in their houses and wear oxygen-restricting face masks – then the lockdown narrative would begin falling apart.

When the poster child for Covid lockdowns Dr. Fauci was asked several weeks later why cases and deaths continued to evaporate in Texas, he answered simply, “I’m not sure.” That moment may have been a look at the man behind the proverbial curtain, who projected his power so confidently until confronted with reality.

Now a new study appearing as a National Bureau of Economic Research working paper, highlighted recently in Reason Magazine, has found “no evidence that the reopening affected the rate of new COVID-19 cases in the five-week period following the reopening. …State-level COVID-19 mortality rates were unaffected by the March 10 reopening.”

Texas Ended Lockdowns and Mask Mandates. Now Locked-Down States Are Where Covid Is Growing Most, by Ryan McMaken

Who would have thought that sunshine and letting people breathe helps fight Covid and keeping people locked up and rebreathing their own respiratory garbage doesn’t? Ryan McMaken at mises.org:

The response from the corporate media and the Left was predictable. California governor Gavin Newsom declared the move “absolutely reckless.” Beto O’Rourke called the GOP a “cult of death.” Joe Biden called the move “Neanderthal thinking.” Keith Olbermann insisted, “Texas has decided to join the side of the virus” and suggested Texans shouldn’t be allowed to take the covid vaccine. Vanity Fair ran an article with the title “Republican Governors Celebrate COVID Anniversary with Bold Plan to Kill Another 500,000 Americans.”

Other states have followed in Texas’s wake, and Mississippi, Alabama, Florida, and Georgia are now all states where covid restrictions range from weak to nonexistent.

Georgia and Florida, of course, are both notable for ending lockdowns and restriction much earlier than many other states. And in those cases as well, the state governments were criticized for their policies, which were said to be reckless and sure to lead to unprecedented death. Georgia’s policy was denounced as an experiment in “human sacrifice.”

If it will shut up just one mask-mandate Karen . . . . From Tyler Durden at zerohedge.com:

According to the relentless pro-mask propaganda, this wasn’t supposed to happen.

For the better part of the past year, the US public was bombarded with “science” how only the wearing of a mask (or two masks, or three masks or more) was the only thing that stood between the Western way of life and Armageddon (despite the periodic emergence of cold, hard data showing no improvement in covid transmission in states that mandated masks vs those that did not, at least until Twitter decided to ban it). Then, one month ago, Texas had had enough and its governor shocked the Faucis of the world – and the White House – when he declared that the mask mandate in the state was officially over. 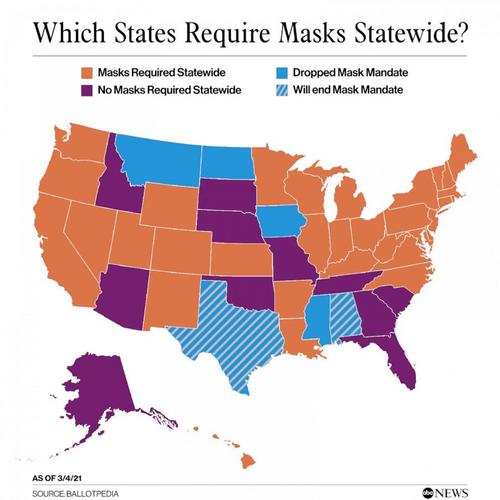 Well, in a development that would likely shock Dr. Fauci, newly confirmed Coronavirus cases in Texas plunged to their lowest since June, roughly three weeks after the state lifted its mask mandate and reopened businesses. 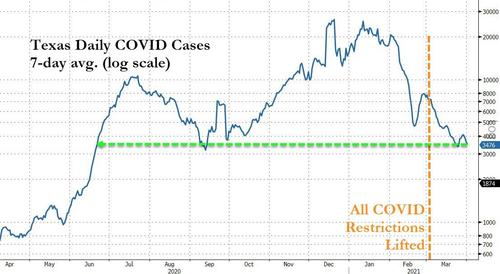 Texas doesn’t crash and burn; Biden does, and Pompeo shines. From PF Whalen at thebluestateconservative.com:

Why Is Everyone in Texas Not Dying? by Jeffrey A. Tucker

Much to the disappointment of ardent proponents of coronavirus totalitarianism, Texans (predominantly red voters) aren’t dying in droves after Covid-19 restrictions were lifted. from Jeffrey A. Tucker at aier.org:

I’m sitting at a bar in Texas, surrounded by maskless people, looking at folks on the streets walking around like life is normal, talking with nice and friendly faces, feeling like things in the world are more-or-less normal. Cases and deaths attributed to Covid are, like everywhere else, falling dramatically.

If you pay attention only to the media fear campaigns, you would find this confusing. More than two weeks ago, the governor of Texas completely reversed his devastating lockdown policies and repealed all his emergency powers, along with the egregious attacks on rights and liberties.

There was something very un-Texan about those lockdowns. My hotel room is festooned with pictures of cowboys on horses waving guns in the air, along with other depictions of rugged individualism facing down the elements. It’s a caricature but Texans embrace it. Then a new virus came along – as if that had never happened before in Texas – and the new Zoom class took the opposite path, not freedom but imposition and control.

After nearly a year of nonsense, on March 2, 2021, the governor finally said enough is enough and repealed it all. Towns and cities can still engage in Covid-related mischief but at least they are no longer getting cover from the governor’s office.

At that moment, a friend remarked to me that this would be the test we have been waiting for. A complete repeal of restrictions would lead to mass death, they said. Would it? Did the lockdowns really control the virus? We would soon find out, he theorized.

I knew better. The “test” of whether and to what extent lockdowns control the virus or “suppress outbreaks” (in Anthony Fauci’s words) has been tried all over the world. Every serious empirical examination has shown that the answer is no.

Money and business do tend to migrate to where they’re treated the best. From Wolf Richter at wolfstreet.com:

And we coined “Management by Zooming Around.” Which is what Oracle’s Larry Ellison is doing.

When on December 11, Oracle disclosed that it “is implementing a more flexible employee work location policy and has changed its Corporate Headquarters from Redwood City, California to Austin, Texas,” it was another step in the process that we will henceforth call “Techsodus.”

The exodus of tech companies, executives, billionaires, millionaires, and regular tech employees from California, and particularly from San Francisco and Silicon Valley, is a combo of fleeing California and a shift to work-from-anywhere. Texas, Florida, Colorado, and other states have been among the destinations. Texas and Florida don’t levy state income taxes, so sure.

But Larry Ellison, co-founder and chairman of Oracle, isn’t moving to Texas along with the headquarters of his company. He has moved his primary residence to Hawaii, following Oracles new doctrine of working from anywhere. And Hawaii’s state income taxes are not far behind California’s.

Oracle already has a 560,000-square-foot campus in Austin, which it opened in 2018 – and moving its headquarters to Austin might not change all that much at first in terms of employment. Oracle said that it would “continue to support major hubs for Oracle around the world,” including its soon-to-be former headquarters in Redwood City. Oracle, founded in 1977, is one of the older tech companies that helped make Silicon Valley. California has had a nearly identical case trajectory as Texas.

In TX, schools are open. Businesses are open. People can go for a walk.